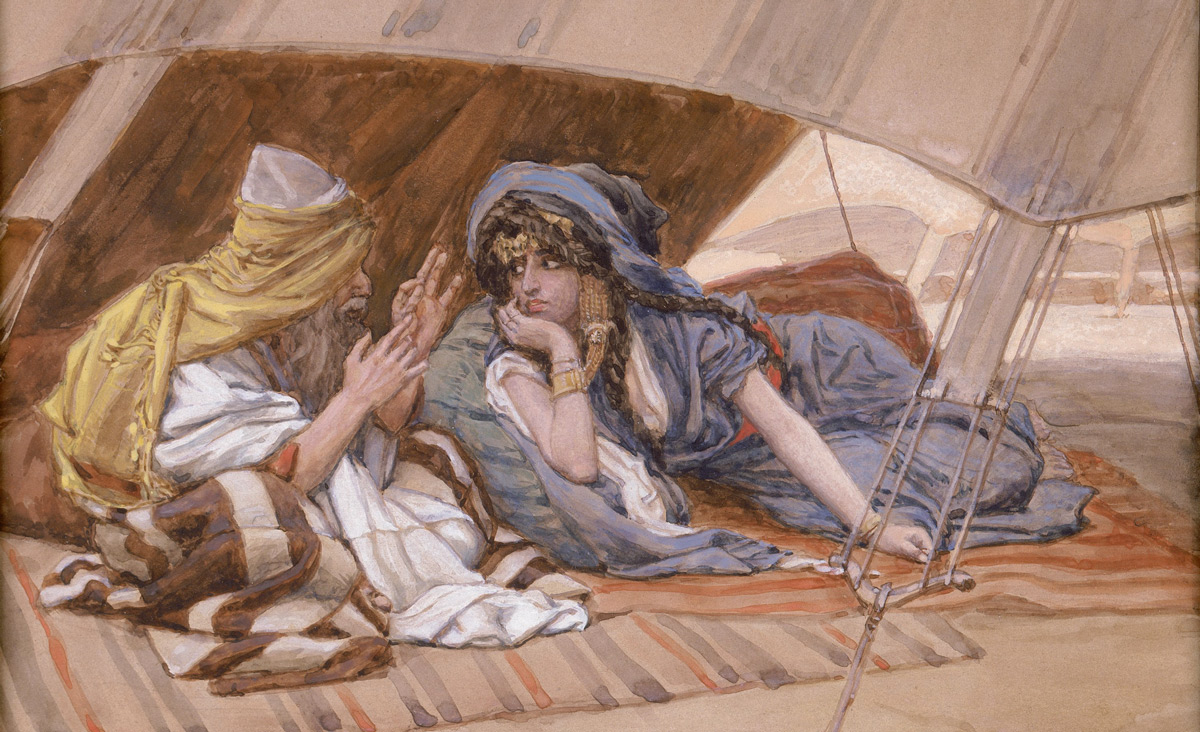 And the life of Sarah was a hundred and twenty years and seven years,
These were the years of Sarah’s life. And Sarah died in Kiryat Arba which is Hebron
In the land of Canaan and Abraham came to lament for Sarah and weep over her.
But Abraham rose from before his dead and spoke to the Hittites, saying:
I’m a resident migrant with you, give me a burial plot among you
And I’ll bury my dead from before me;
But the Hittites answered Abraham, saying:
Hear us, milord, you’re a king by God among us,
Bury your dead in the choicest of our graves
There’s not a man of us will keep his grave from you, to bury your dead.
But Abraham rose and bowed before the council of the land, the Hittites,
And he spoke to them, saying: if it be in your souls to bury my dead from before me, hear me
And approach Efron son of Zohar for me to give me the double cave he has at the end of his field
At full price, give it to me as a burial plot among you.

The thing about this week’s Torah reading about Sarah’s life (Genesis 23:1 – 25:18) is that when it opens she’s dead, so it’s not really about her life. Only it is, because it shows how the actions she took in her life play out in the coming generations and most particularly in the field that Abraham purchases for her burial. Those actions play out through her and their effect on Abraham; you might describe Abraham’s career as being that of someone stuck between a rock and a hard place, the rock being the Eternal Rock, as we call Him, and the hard place being his formidable wife Sarah, every inch as determined a character as her righteous husband.

So let’s take a moment to ask: why does Abraham have to buy a field? He loved her deeply, he sang a dirge and wept bitter tears over her, but now he wants to buy a plot of land. Why? The reason is the same one that in a previous Torah reading led Sarah to give her maid Hagar to Abraham as a second wife. Sarah says, “Let me be built up by her,” because she doesn’t trust the Lord’s promise to Abraham that he’ll be a father of multitudes. Or perhaps she’s desperate: she’s heard that divine prophecy, she feels her barrenness is standing in the way, and through Hagar she can make it happen, at least in the short term. But as we know, it doesn’t turn out so pretty. Likewise Abraham now wants to buy a piece of land, a burial plot, to secure something enduring in this land where he’s doing well but who knows what the future might bring? Yes, the Lord has promised him that all this real estate is going to have his name on it sooner or later, but he needs to put money down on something stable and permanent. In this respect Abraham is like Arthur Miller’s Willy Loman, the archetypical American who has “always felt a little bit temporary” about himself. He has huge dreams that keep him awake at night, and even huger fears.

It’s the fears your wife usually listens to more attentively—hence Sarah’s own desperate measure in ceding her own proper place to Hagar. But now Sarah is dead and the fears are sublimated into a plot, a burial plot, a field grand enough to commemorate Abraham’s love for her and where the sequel of their joint project will be played out.

And Abraham heard Efron and Abraham weighed out for Efron
The sum he named before the Hittites. Four hundred silver shekels
Go to the seller, and it was done:
Efron’s field which is in Makhpelah, east of Mamre, the field and the cave in it
And all the trees in the field within its boundaries all around,
Property of Abraham, witnessed by Hittites in full council at the city gate.

Then come the parts where Abraham insists that his servant Eliezer swear an oath to go find Isaac a wife from among his own kinfolk back home, Eliezer’s confab with the Almighty to give him a sign, and the Almighty’s obliging by bringing Rebecca onto the scene to demonstrate the generosity that makes her a fit match for Isaac. Let’s now cut back to the field, and the chase.

And Rebecca rose with her maids and they rode on camels and went after the man
And the slave took Rebecca and left
But Isaac was coming from the road to the well of Laḥai Ro’i, where he was settled in the Negev.
And Isaac went out to converse in the field as the evening turned
And he raised his eyes and looked
And here were camels coming.
And Rebecca raised her eyes and looked
At Isaac and she fell off her camel.
And she said to the slave, “Who’s that man walking in the field toward us?”
And the slave said, “He’s my master.”
And she took the scarf and covered herself.
And Isaac brought her into the tent of Sarah his mother
And took Rebecca and she was his wife.
And he loved her and Isaac was compensated over his mother.

Not only Abraham’s sorrow is buried in that field, Isaac’s sorrow is not yet buried there. Three years after Sarah’s death, even if he’s living down in the Negev, he’s still going back to that field and as evening falls going to do—what exactly? I’ve translated the key Hebrew term as “converse.” The talmudic rabbis said he was going to pray the twilight service, minḥah, and that he invented it. The medieval commentator Samuel ben Meir (1085-1158) suggests he was going out in order to inspect what his workers had done with the bushes he’d planted in the field. The weight of subsequent biblical usage of the term—through references to Hannah’s prayer in the book of Samuel and to King David—has leaned toward seeing it as a verb describing imploring, pleading, an outpouring of feeling.

But whether you think the Torah has chosen this highly dramatic moment to say that Isaac is engaged in horticulture or in prayer, the point is that he’s gone to his mother’s resting place. That field is where the reading begins and where it ends, and where the Lord conspires for him to meet the love of his life. In the place where his mother is most present for him, he is brooding and pouring out his grief over her, and the face of this man who has been literally sacrificed to God and saved from his father’s knife by an angel is so terrifying to behold that Rebecca falls from her mount. Or, if we’re being romantic, we can at least say that something about Isaac hits her so hard even at a distance that she physically loses her balance.

The consequences of this meeting in that field are immediate. Isaac has gone out to complain to the Lord about his loss and the Lord has answered. Isaac takes the answer from the place of death to the place of life, his mother’s tent, which both he and Abraham have preserved as a kind of shrine. And Isaac stops being a living sacrifice. Life can resume.

End of story, right? Abraham has arranged a match for Sarah’s son, Isaac and Rebecca are going to have babies, and they’ll all live happily ever after. No. The rest of the reading continues to deal with the ramifications of Abraham’s marriage to Sarah. First, he remarries—and unlike the case with his marriage to Sarah, which was an endless wait for one son, this one to Keturah is a virtual geyser of offspring. Some rabbis have suggested that Keturah is Hagar under a different name, but one has to ask why, if the Torah had intended to reinstate Hagar, give her another name? No, the whole point of another wife and a further chain of children is this:

But Abraham gave all that he owned to Isaac.
And to the sons of Abraham’s concubines Abraham gave gifts
And sent them away from Isaac his son while he was alive,
East to the land in the East.
And these are the days of the years of Abraham’s life
Who lived a hundred and seventy years and five years.
And Abraham gave up the ghost and died well satisfied, old and full,
And he was gathered to his people. And he was buried by Isaac and Ishmael his sons
In the Makhpelah cave in the field of Ephron son of Zohar the Hittite, east of Mamre.
The field that Abraham bought from the Hittites there were buried Abraham and Sarah his wife.
And it came to be that after Abraham died the Lord blessed his son Isaac
And Isaac settled at the well of Laḥai Ro’i.

Earlier the Torah has not described either Hagar or Keturah as a concubine: each, at the point that Abraham takes her, is described as “wife.” It’s rather in the essential crux of inheritance, both spiritual and material, that the term is introduced and the distinction is drawn between them and Sarah. That is why, in the Torah, the blessings given by a father are so vital to the next generation; it’s when you come to inherit that you find out where you stand.

In his note about the word “concubines” here, Rashi is stunningly brutal but lucid: wives have a ketubah, a wedding contract; concubines do not. There is not a word in the text to support Rashi’s distinction, but what he is doing by introducing the marriage contract, a much later legal convention, is explaining the difference in status. And I think it is entirely appropriate.

There was a contract between Abraham and Sarah, and another contract between Abraham and God, and neither Hagar and Keturah nor their children are mentioned in that contract. Where they are mentioned, implicitly, is in the Lord’s promise that Abraham’s descendants will come to be tormented for 400 years. By whom will they be tormented? By their cousins, of course. Just as you’re thinking that this week’s Torah reading will close with the burial of Abraham in the cave in that field, it doesn’t. It closes instead with a family tree of Ishmael and all his sons:

But these are the chronicles of Ishmael son of Abraham
Borne by Hagar the Egyptian, maid of Sarah, for Abraham.
And these are the names of the sons of Ishmael by name in their habitations. . . .
And these are the years of the life of Ishmael, a hundred and thirty years and seven years
And he gave up the ghost and he died and was gathered to his people.
And they resided from Havila up to Shur which is across from Egypt
As you come to Ashur, over all his brothers he extended.

The commentator Yehuda Kil points out that when Joseph is sent out by his father Jacob to “go see how your brothers are doing,” it is a band of his cousins the Ishmaelites that his brothers sell him to, and who take him to Hagar’s birthplace Egypt and on the way trade him to further cousins, the descendants of Keturah’s son Midian. The final reverberations of Sarah’s life spread far beyond the field where Abraham buries her—just as the descendants of Ishmael, the son she had Abraham send away, spread out all over the lands the Lord has not promised to Abraham’s chosen son. Abraham’s fear and Sarah’s fear keep working long after they are both dead; and it is through Sarah’s fear and her mistreatment of Hagar the Egyptian that the Lord will forge Abraham’s descendants into a people, in a forge of 400 years.