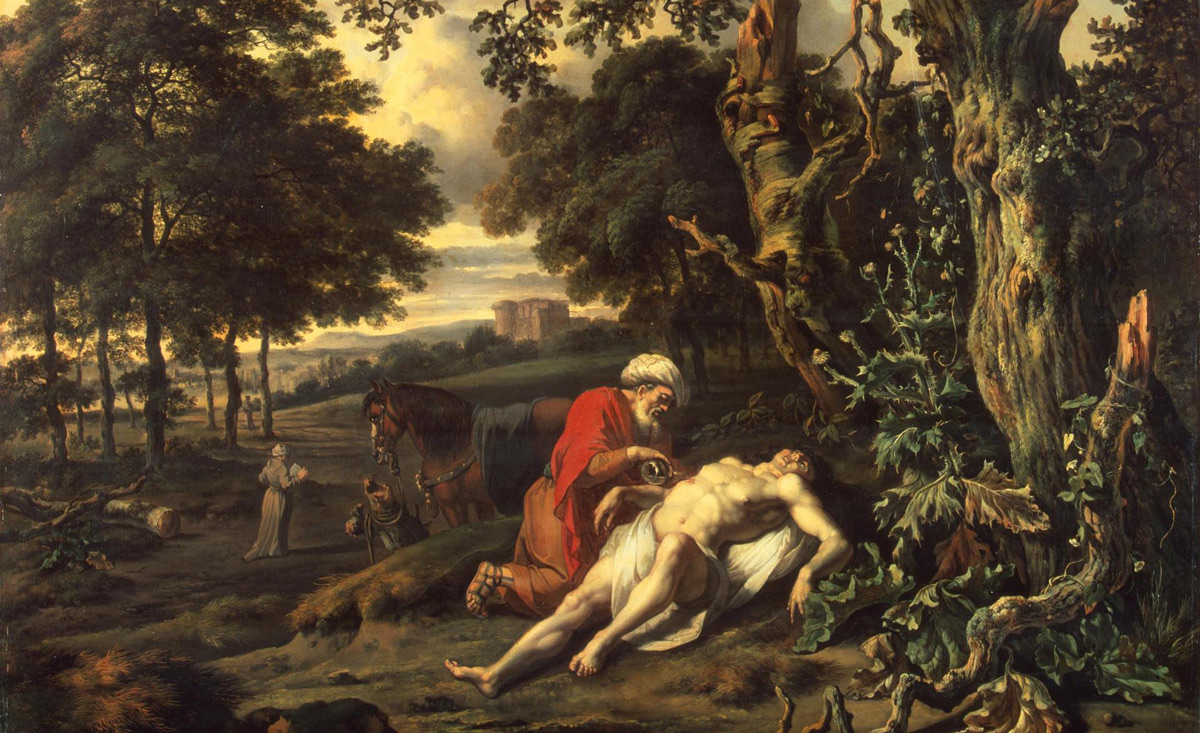 From Parable of the Good Samaritan by Jan Wijnants, 1670. Wikipedia.

“Is there a Hebrew word for a cliffhanger?” asks Mosaic reader Frederick Stone. “Your column of December 16 has me all worked up, and now I have to wait two weeks for its second part? Oy, the suspense!”

Suspense, Mr. Stone, was the point. I’ll continue where I left off.

Asked about the Hebrew word rey’a, translated by the New Testament as “neighbor” in the commandment in the book of Leviticus “You shall love your rey’a as yourself,” Jesus answered, as we have seen, with a parable. A rey’a, its point was, is not just one’s friend (which is one legitimate interpretation of the word) but everyone (which is another), even someone classed with one’s enemies. The same thought is attributed to Jesus in what is known as the Sermon on the Mount, where, we are told, he preached: “You have heard it said, ‘You shall love your neighbor and hate your enemy,’ but I say to you, love your enemies, bless them that curse you.”

Jesus is criticizing what he thinks is the understanding of rey’a on the part of the rabbis of his age, who restrict the word to a more selective category than that of all human beings. Is this a true description of the early rabbinic position? Although that position is never stated clearly in early Jewish sources, a brief passage in the Jerusalem Talmud, repeated in the midrashic compilation of B’reshit Rabbah, suggests that Jesus was being accurate. In the Jerusalem Talmud’s tractate of N’darim, we read:

“You shall love your rey’a as yourself”: Rabbi Akiva says, “This is the great principle of the Torah.” Ben-Azzai says, “A greater principle is ‘This is the book of the generations of man.’”

Of Akiva’s pronouncement, we have already spoken. That of his pupil and younger contemporary Shimon Ben-Azzai is at first glance puzzling. What does the verse he cites, an introduction to the genealogies of the nations in Chapter 5 of Genesis, have to do with the commandment in Leviticus? On further consideration, though, it is clear what Ben-Azzai is getting at, because the verse’s second half, which he does not bother to quote, is “On the day God created man, He created him in the image of God.” Since, Ben-Azzai is saying, the rey’a we are enjoined to love does not include all of humanity, the commandment to love him or her is not as important as the recognition of the unity of the human race taught us by the biblical story of Creation. God made everyone, without exception, in His image: this is the Torah’s greatest principle.

Ben-Azzai’s choosing to state so sublime a truth in so subtle, half-concealed a manner is itself wonderfully rabbinic. Yet what matters for the purpose of our discussion is that, although Jesus and Christianity were probably not at all in his mind when he stated it, he was in agreement with Jesus that the rabbis, himself included, did not believe that rey’a referred to everyone. His statement would make no sense if he thought otherwise.

Whom, then, according to rabbinic tradition, does the word refer to? In the Talmud and classical midrash, there is no real discussion of the question. For that, one has to skip to the biblical commentators of the Middle Ages. One of the earliest of them is Shmuel ben Meir (1080-1160), the grandson of the great biblical exegete Rashi (who, apart from citing Akiva, has nothing to say on this matter). Shmuel’s pithy comment is: “‘Love your rey’a as yourself’: he is your rey’a if he is virtuous, but not if he is wicked, for it is written [Proverbs 8:13], ‘The fear of God is the hatred of evil.'”

This sounds very much like the point of view objected to by Jesus, and the two verses, one from Leviticus and one from Proverbs, may already have been coupled in the rabbinic mind in antiquity. A rey’a, for Shmuel ben Meir, clearly means a friend, acquaintance, or member of one’s community, since how else could one have any way of knowing whether he is virtuous or not? We can have no idea of the character of perfect strangers.

Maimonides (1135-1204), by contrast, takes rey’a to designate a fellow Jew. “Everyone is commanded,” he writes in his Mishneh Torah, his great compendium of Jewish law that was widely regarded by later generations as authoritative, “to love every single Israelite as he does his own person, for it is written, ‘Love your rey’a as yourself.'” It makes no difference whether the Israelite is virtuous or not; he is one’s comrade and must be loved.

Medieval Christianity retained Jesus’ interpretation. “Since all men are alike in nature,” writes the great Catholic jurist Thomas Aquinas (1225-1274), “they should love one another.” In his attempt to ground the commandment in natural law, Aquinas cites in its Latin translation the verse from the book of Ben-Sira, which is part of the Catholic but not the Jewish Bible, omne animal diligit simile sibi, “every animal loves its like.”

Whether Ben-Sira, a 2nd-century-BCE Jerusalem Jew, ever observed tomcats at mating time would seem doubtful, but he at least was wise enough not to make the same claim for human beings—and here is the difference between the sober practicality of Judaism, which accepts human nature as it is, and the romantic idealism of Christianity, which strives to exceed it. Although it may be inspiring to be told by Jesus that we should love everyone, this is, realistically speaking, a bit beyond our capacity, as Christianity’s bloody history demonstrates only too well. History, indeed, both ancient and recent, suggests that it’s not so easy for every Jew to love every other Jew, either.

And what about being commanded to love our friends or fellow Jews as we love ourselves? Isn’t this asking too much, too?

Some thought it was. The 7th- or 8th-century translation of the Bible into Aramaic, incorrectly attributed to the Mishnaic sage Yonatan ben Uziel, interprets “as yourself” to mean “as you would want done to yourself,” and renders the verse in Leviticus, with the help of a well-known adage of Hillel the Elder, as “You shall love your friend so that what is hateful unto you do not do unto him.”

Naḥmanides (1194-1270), for his part, avails himself of the odd usage in Leviticus, mentioned in my December 16 column, of the preposition l’, “to” or “for,” before rey’akha in place of the accusative particle et. The meaning of Leviticus 19:18, he maintains, is “You shall love for your rey’a what you love for yourself.” The Torah is telling us, in other words, that “envy should never cause us to wish less for our friends than we wish for our own selves.”

That leaves Mr. Stone’s query about “cliffhanger.” Although no exact Hebrew equivalent of the word exists, there is an expression, lihyot omed v’taluy, “to stand hanging,” that means to be in a state of uncertainty or suspense. I hope he is no longer in one.