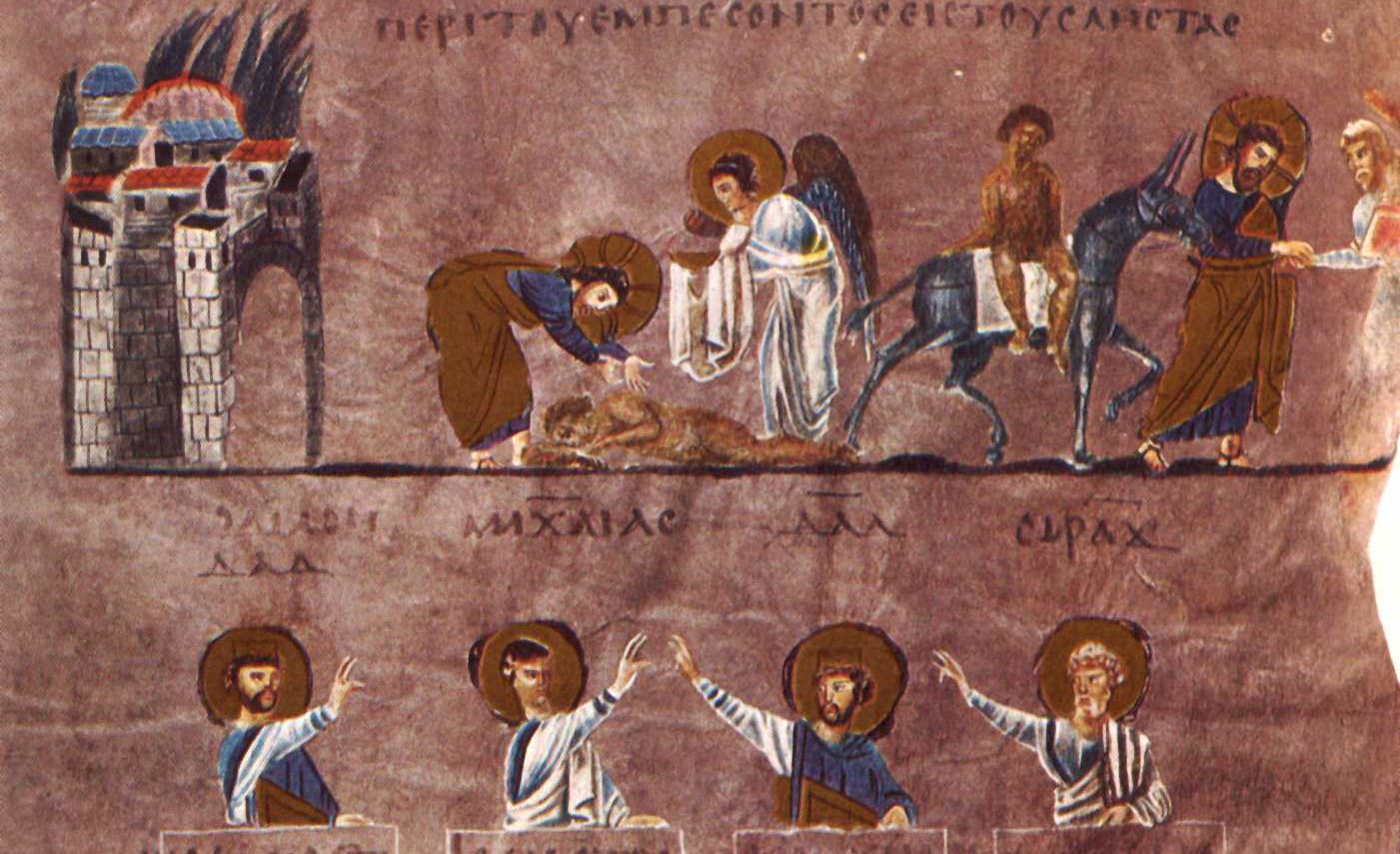 A depiction of the parable of the Good Samaritan from the 6th-century Rossano Gospels. Wikimedia.

To whom does the biblical commandment v’ahavta l’rey’akha kamokha, “You shall love your neighbor as yourself,” apply? Who exactly is rey’akha?

Generally translated as “your neighbor,” the Hebrew word rey’akha in Leviticus 19:18 comprises the noun rey’a and the second-person singular possessive suffix -kha, and Mr. Silverman is not the first to ask this question. The earliest inquirer on record is mentioned in the Gospel according to Luke, composed about 100 CE and one of the New Testament’s four accounts of Jesus’ life. There we read that a Jew “learned in the Law” (nomikós, in the Greek of the New Testament) approaches Jesus and asks: “What shall I do to inherit eternal life?” (This is obviously a translation of the Hebrew idiom “to have a portion in the world-to-come.”) Jesus replies with the question, “What is written in the Law?,” and the nomikós answers: “You shall love the Lord your God with all your heart, and with all your soul, and with all your strength, and your neighbor as yourself.” “You have answered right,” says Jesus. “Do that and you shall live.”

But the nomikós is still not satisfied. “Who is my neighbor?” he asks. To this, Jesus responds with a parable known as the story of the good Samaritan. A Jew, he says, was robbed, beaten, and left for dead on the road from Jericho to Jerusalem. Two fellow Jewish passersby saw him lying there but offered no help. Then “a certain Samaritan, as he journeyed, came where he was; and when he saw him, he had compassion on him, and went to him, and bound up his wounds, . . . and set him on his own beast of burden, and brought him to an inn, and took care of him.” Jesus then asks: “Which now of these three was neighbor unto him that fell among the thieves?” “He that showed mercy,” says the nomikós, and Jesus tells him: “Go, and do likewise.”

Four important points might be made about this story: (1) The Greek word plesíos, used by the New Testament to translate rey’a, derives from pélas, “near” or “close to,” and indeed means neighbor; (2) The New Testament borrowed this rendering of rey’a from the Septuagint, a 3rd- or 2nd-century BCE translation of the Bible, the world’s first, made by non-rabbinic Jews in Alexandria; (3) Jesus’ choice of a Samaritan for his parable was not fortuitous, because in 1st-century Palestine the Samaritans and the Jews were enemies; (4) Asked by Jesus to state the gist of the Torah, a Jew with rabbinical knowledge responds immediately by citing two biblical verses that are to be valued above all others. One, beginning “You shall love the Lord your God,” is from the passage in Deuteronomy from which the Shema Yisra’el, the “Hear, O Israel” prayer is taken. The other is “Love your rey’a as yourself.” And indeed, Jewish tradition confirms that an educated Jew would have been likely to think of the latter verse because Rabbi Akiva, born not long after Jesus’ death, is quoted by the Jerusalem Talmud as saying, “Love your neighbor as yourself: this is the great principle of the Torah.” If 1st-century Christianity attached supreme importance to Leviticus 18:19, it learned to do so from 1st-century Judaism.

But how did the Judaism of that and subsequent centuries understand this verse? What did it think a rey’a was?

Certainly not a neighbor. Although the word, which is apparently related to ro’eh,“pasturer,” may originally have denoted a fellow shepherd whose flocks grazed near one’s own, in the Bible it doesn’t signify physical propinquity. What it means is one of two things: either (a) “friend,” “acquaintance,” or “companion,” as in the book of Job, “And Job’s three friends [shloshet rey’ey Iyov] heard of all the evil that befell him and came [from afar], each from his own place”; or (b) “other,” as when we read in the story of the Tower of Babel, “And they said to one another [ish el rey’eyhu, “every man to his rey’a“], ‘Come, let us make bricks.'” Uncertain which of these two meanings to adopt, the Septuagint chose “neighbor” as a compromise, one’s neighbor being neither as psychologically and emotionally close as a friend nor as distant as an unspecified other.

But now consider the early-2nd-century translation of the Pentateuch into Aramaic known as Targum Onkelos, which always reflects rabbinic opinion. Unlike the Septuagint, it does not render rey’akha as “your neighbor” (shakhnakh). Rather, it has ḥavrakh, “your friend.” Did the rabbis then understand Leviticus 19:18 to refer only to a friend? Not necessarily, because Aramaic ḥavra and Hebrew ḥaver can also mean “fellow man.” This, for example, is the sense of ḥaver in the well-known maxim attributed to the 1st-century Hillel the Elder, Al tadun et ḥaverkha ad she’tagi’a limkomo, “Judge not your fellow man until you have been in his place.” To interpret ḥaver in this case as referring only to a friend would be over-restrictive.

Complicated? It only gets more so, because Leviticus 19:18 has an unusual grammatical feature that doesn’t show up in translation at all. Normally, Hebrew ahav, “love,” is a transitive verb that takes a direct object just like its English counterpart, so that “You shall love your neighbors as yourself” would be v’ahavta et rey’akha kamokha, using the accusative particle et before rey’akha, just as “You shall love the Lord your God” is v’ahavta et adonay elohekha. Leviticus 19:18, however, reads v’ahavta l‘rey’akha kamokha, using the preposition l’ instead of et. Translated literally, this would be “You shall love to [or “for”] your rey’a as yourself.” The only reason this doesn’t seem as strange in Hebrew as it does in English is that Hebrew readers have had thousands of years to get used to it, but it’s an exceedingly odd construction.

I’ll continue in my next column.