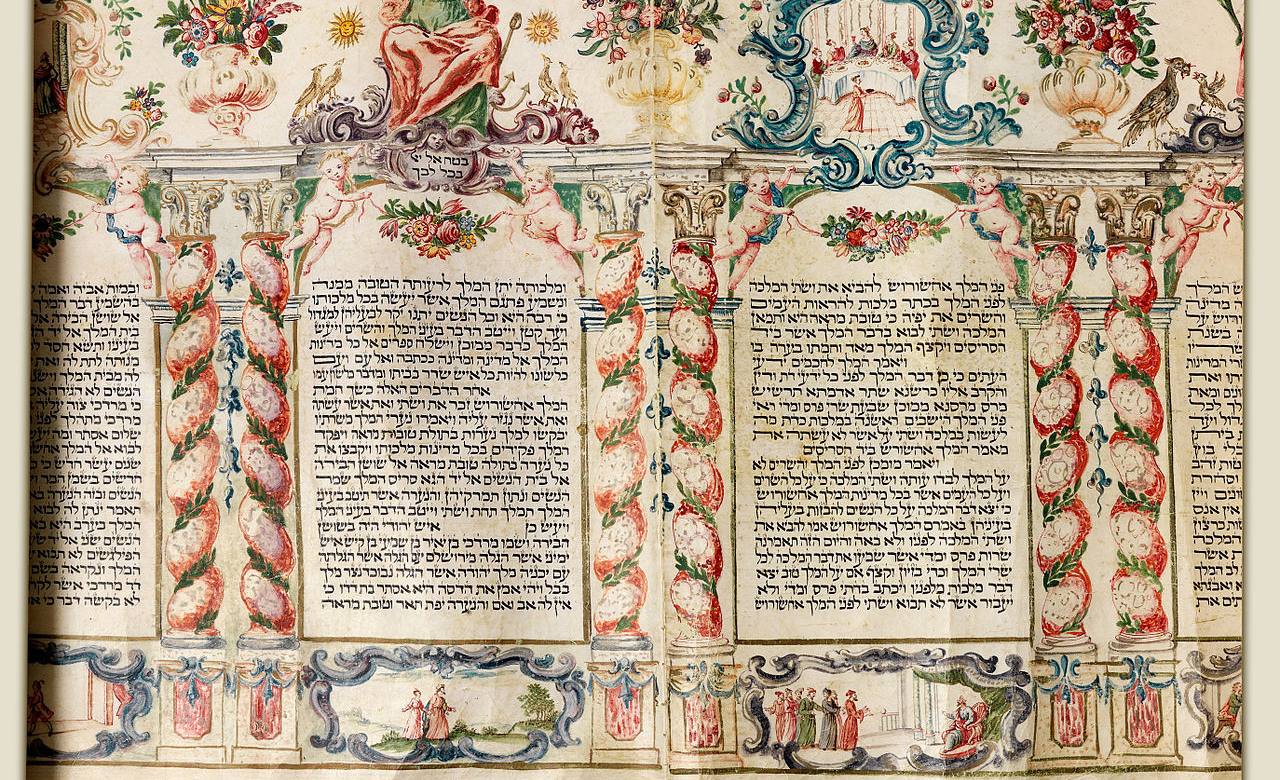 A scroll of the book of Esther from northern Italy, mid-eighteenth century. Wikimedia/Israel Museum.

On Purim and all the days of Hanukkah, a curious piece of liturgy is added to both the blessing after meals and the thrice-daily silent prayer. The two festivals have in common that each is of entirely rabbinic invention and celebrates a miraculous deliverance from Gentile monarchy. There is a specific version for Hanukkah and a parallel one for Purim, but the two share the same opening lines, the first two words of which, al ha-nissim, give the prayer its name (I’ve used the Sephardi version here, but the wording in the Ashkenazi liturgy is nearly identical):

For the miracles and for the deliverance
And for the great deeds and the rescues
And for the wars, redemption, and release
You performed for our fathers
In those days and at this time.

That last phrase betrays a certain anxiety. By way of contrast, the binding of Isaac, a traumatic event by anyone’s calculation, is mentioned daily, and Abraham’s supreme act of devotion is noted as meriting divine favor, but without any felt need to draw the Almighty’s attention to the span of time separating the event and our cashing in the chit. What is Al ha-Nissim so anxious about? I suspect it stems from the fact that the victory described is not really past and the war isn’t really over.

So, to start with, let’s look at the account the prayer gives of Hanukkah:

Then, almost as an afterthought, we get the following bit about the Maccabees cleaning the Temple:

After that Your sons came to the inner sanctuary of Your house
And cleared Your hall and purified Your Temple
And lit lights in Your sacred courts
And appointed these eight days of Hanukkah
To thank You and praise You.

If that’s not anxious enough, we need only flip to the back of the prayer book for a more obscure variant of this prayer, said only by those who have forgotten to include it in its proper place in the blessing after a meal and need to recite it later:

May the Merciful One work among us
Wonder and miracles,
Just as He did for our fathers in those days and at this time.

There is something more immediate in this unusual plea than, say, our wish at the conclusion of the Passover seder that we celebrate next year in Jerusalem. Why do we require “wonder and miracles”—in this context, things that are needed in times of intense persecution—at this particular hour? Who is the enemy that we keep expecting at the door?

When we look at the Purim version, which starts exactly the same way, we have another decisively vanquished enemy and another triumphal dispatch, along with hints of the same anxiety:

In the days of Mordecai and Esther in the capital Susa
When the wicked Haman stood over them to try
To exterminate, kill, and wipe out
All the Jews from boy to elder, infant and woman
On a single day, the thirteenth of the twelfth month
Which is the month of Adar,
And to despoil their wealth.
But You in Your manifold mercies
Reversed his thought and spoiled his plot
Repaid him his due upon his head
And they hung him and his sons from the scaffold.

Unlike its Hanukkah equivalent, this prayer doesn’t end with praising God’s name, or establishing a memorial feast (although the book of Esther does actually end with just that), and certainly not with a redemptive scene akin to the cleansing of the Temple. Instead, we’re just left with the image of Haman and his progeny swinging from the gallows.

Rabbi B.S. Jacobson in his magisterial Netiv Bina traces at great length the halakhic discussions of these two festivals and the question of exactly which miracle they are celebrating. In the case of Hanukkah, Jacobson follows the Babylonian Talmud: it is the miracle of the canister of oil found by the Maccabees in the corrupted temple, which, burning for exactly the right number of nights, served to link this celebration to the existing one of Sukkot.

All this is entirely absent from I Maccabees and II Maccabees. That doesn’t necessarily matter, because the rabbinic tradition (unlike the Catholic Church) excluded those books from the canon. But the story is also unknown to Josephus. In fact, even the Al ha-Nissim prayer refers to that part of the miracle only obliquely (“and they lit lights in your sacred courts”). I’m not here to dispute the miracles of the Lord, only to point out that the liturgy, even excluding the bit about the oil, insists on framing the conflict in one way when all the other available sources indicate it happened in quite a different way.

How different? I Maccabees tells the story of Mattathias stabbing a Hellenizing Jew who, in order to placate the conquering Seleucids (“the Greeks”), was willing to bow to a Greek idol. In that version, Mattathias cries, “Whoever is for the Lord, [come] to me,” a direct allusion to Moses’ cry to the Levites to arm themselves and go through the camp killing their own idolatrous kin who worshipped the golden calf. However you look at it, this is a story of  civil war—a story that the rabbis are at great pains to frame differently, turning an internal conflict into an external one.

II Maccabees is even less like the talmudic and liturgical versions. Its story—far less dramatic but, according to some scholars, much more accurate—is of a divided Jewish people slowly co-opted by the Seleucid invaders and of one priestly dynasty being ousted by another, the Hasmoneans. The latter were good at fighting local battles and obtaining the patronage of more powerful regimes, but also managed to keep out the highly inflammatory statues of idols and other Hellenizing touches and eventually to concentrate both the high priesthood and temporal leadership in their own hands. That story, which does conform with Josephus’ account, is even less heroic.

Moving on to Purim, Jacobson also notes that, while there is no mention of the Lord at all in the book of Esther, it is meant to be read in tandem with the book of Daniel, which follows it in the canon. The two—thought to be composed significantly later than the other biblical books—address what it means to be a Jew living under non-Jewish rule. Hence the book of Daniel is not really about the lion’s den, which—much like the Maccabees’ oil canister—is what people remember, but rather about Daniel and his companions surviving the physical and spiritual challenges of life as prisoners of a foreign court. Instead of non-kosher wine they ask to drink water, and instead of non-kosher meat they ask to eat seeds. (Rabbi Jacobson proceeds to list community after community around the world with a tradition of eating seeds on Purim.)

I suspect Rabbi Jacobson is right, and is on to something. Just as the Al ha-Nissim prayer for Hanukkah seeks to portray a change of elites or a civil conflict as a war of liberation, the same prayer for Purim seeks to pin on the easily vanquished Haman an existential threat to Jewish civilization. In fact, the turning point in Esther is not the reversal of fortune in the middle of the book but the previous exchange between the archetypal incognito Jew, Queen Esther, and her embarrassingly dressed cousin Mordecai, who warns her:

Do not imagine you’ll get out alive
There in the king’s house, alone of all the Jews.
For if you keep silent and still at this time,
Relief and rescue will stand by the Jews from another place . . .

“Do not imagine you’ll get out alive,” he tells her, without specifying the other place that rescue will come from if not from her. “The Place,” some commentators note, is a talmudic term for the Almighty, and it’s hard to see this passage as referring to anything but divine intervention, albeit of a non-obvious kind. But the book as a whole is about the temptations of assimilation. Jews in that kingdom do not fast regularly but only when under threat of extinction. And Mordecai, who represents Jewish pride and spirituality, nevertheless instructs Esther not to advertise her obviously problematic Jewishness when she goes for her royal interview, and doesn’t for a moment dream of withholding her from an all-but-forced marriage to the non-Jewish king.

These late biblical books and festivals describe the beginnings of the exilic world, a world in which it is not easy to be a Jew, and the challenges are internal as much as external. That is the war that Al ha-Nissim tells us implicitly has not yet been won, the war for which Jews beg the Almighty’s intercession in this day as He did then. We were delivered out of Egypt, but unlike Egypt, the world we live in, and the battle within ourselves to adjust to it while keeping our spiritual integrity, never really go away.