An Unparalleled Document of Jewish Mourning

The death of his brother in 1041 moved Shmuel Hanagid, one of Jewish history’s most extraordinary figures, to write nineteen piercing poems charting the rise and fall of his grief. 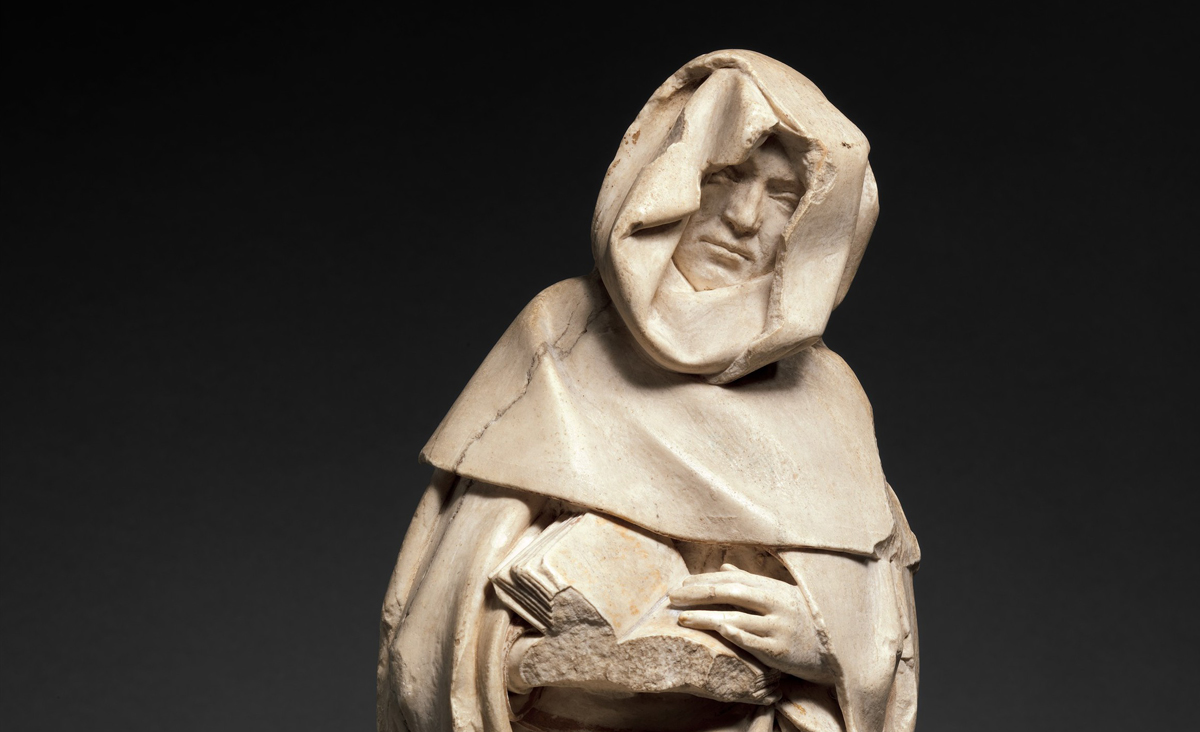 A mourning figure in alabaster, ca. 1453, France, begun by Jean de Cambrai and completed by Étienne Bobillet and Paul de Mosselman. The Metropolitan Museum of Art.

Shmuel Hanagid, a powerful leader of Andalusian Jewry and among the greatest of the medieval Hebrew poets, was born in Cordoba in 993 and died in 1056. Upon the death of his brother Yitzḥak in 1041, Hanagid composed a cycle of nineteen poems that are, writes Hillel Halkin, “apart from their lyrical beauty, an unparalleled document of mourning.” Excerpts from them, masterfully translated with accompanying commentary, appear in Halkin’s new book, After One-Hundred-And-Twenty: Reflecting on Death, Mourning, and the Afterlife in the Jewish Tradition (Princeton University Press, co-sponsored by the Tikvah Fund).

Shmuel Hanagid—the Hebrew epithet means “the governor”—is one of Jewish history’s most extraordinary figures. Not since the time of Judah the Prince, compiler of the Mishnah and leader of the Jewish community during the Roman occupation of Judea, had any Jew wielded the power that he did.

Born in 993 in Cordoba, in Muslim Andalusia, Hanagid settled as a young man in Granada and swiftly rose to prominence at its royal court. For over two decades, he served as the grand vizier of Granada’s kingdom, which contended with Seville for supremacy in the south of Spain, and as a military commander in its battles. He also found time to be a leading rabbinic scholar, a lover of wine and good company, an inveterate philanderer, a deeply religious personality, a devoted father to the son who succeeded him after his death, a ruthless enemy to his foes—and a prolific poet, to my mind the greatest of the great medieval Hebrew poets, whose verse reflects these many sides of him.

In 1041, when Hanagid was forty-eight, his older brother Yitzḥak, a prominent Jewish communal figure in his own right, died after a brief illness. Though having lived in different places, the two men were extremely close. During the following year, Hanagid wrote a sequence of nineteen poems about Yitzḥak’s death. Briefly annotated by his son Yehosef, they are, apart from their lyrical beauty, an unparalleled document of mourning.

The first of these poems, written, Yehosef tells us, when Yitzḥak was in critical condition, is a prayer for his recovery. In it we already encounter the deep sense of guilt that runs through the entire sequence. Hanagid had lived a life of political intrigue, bloody warfare, and voluptuary pleasures; it was he, he felt, who deserved to be punished, not Yitzḥak. “If harsh, Lord, You must be,” the poem’s last lines read,

But Yitzḥak dies and Hanagid learns of it in the next poem, as he is on his way to his brother with his own physician. His first, instinctive reaction is denial. “Be still and may dust fill your mouth!” he berates the bearer of the tidings.

Would every woe were your woe!
Might they bury you who bore you!
The doctor with me many like him healed and has made well,
And you say he is dead who led his age and people?
I tell you, he but sleeps!

By Poem 4, in which Hanagid rends his garments, his heart “in tatters more than any rag, more shattered than the dishes you will smash,” the reality of his brother’s death has set in. And in Poem 5, so has its permanence:

Give up, my soul, all thought of seeing him again.
Learn to live without him—and if you
Find that unthinkable, die too!

The sixth poem describes the funeral, before which Hanagid performs the ritual cleansing and shrouding of his brother’s body. Afterward, those in attendance offer words of comfort. His anger at their trite assurances that he will get over what he is sure he never will erupts bitterly:

Aye, when I had washed him,
And dressed him,
And laid him out on his bier
And walked him on his last way,
And stepped forth from my circle of friends to lower him into
the grave,
And they said,
“He has taken him to His place,”
Did I not, stricken, say,
“Would He had taken me in his place”?
And when they said,
“Time heals all wounds,”
I answered them:
“A curse on time and its cure!
Lord, You can have back this life,
Which, my brother dead,
Is too much to endure!”

The day after the funeral, Hanagid returns to the cemetery. Standing by the fresh earth on his brother’s grave, he speaks to him. Yet far from making him feel that Yitzḥak, though dead, is still approachable, the nearness of the grave fills him with horror at the thought of the physical dissolution already taking place in it.

The eighth poem is set during the seven-day period of the shiva, which Hanagid spends in his brother’s residence. Again he angrily refuses solace. His resentment of the condolence callers’ invocation of time’s curative powers is now compounded by his annoyance at their well-intended cliché that everyone goes through the same experience. What do they know about his experience? How can anyone but himself understand what his brother was to him? ”Ah, you would comfort me, would you?” he asks.

As if any comfort there could be,
Or any life
Or sanity,
After putting Yitzḥak in the grave!
Stand back, then,
Save your breath—
Or better yet,
Find me a fitter friend,
Such as a jackal that has lost its young,
And let it howl, and me weep, and see
Which one of us will be grief’s champion.
My friends,
Don’t think that you have known loss like mine,
Or that my Yitzḥak’s death is like all men’s.

The shiva ends. Rather than feeling relief at being left at last with his own emotions, however, Hanagid must now confront the reality that the world, having done its religious duty, has moved on past his brother’s death, while he is just starting to live it. “Over now,” he declares in the ninth poem, “are mourning’s days, / but over not each morning’s daze, / the days of pain, / the stomach-churning nights.”

The real ordeal is still ahead of him. As much as he chafed under death’s distracting ceremonies, they helped get him through the first week. Now he is on his own.

The days go by. The initial month of mourning draws to a close—and with it Hanagid’s old ways and habits, stunned into abeyance by his brother’s death, begin to stir again. Although his heart, he assures Yitzḥak in Poem 10, remains “split in two, / half consumed in ashes / and half lived in by you,” so that “in half your constant image I behold, / in half my anguish smolders uncontrolled,” life reasserts itself. Grief is now joined by dismay that grief is weakening. This precipitates a new crisis in Poem 11:

But even as he fights normality’s return, Hanagid is forced to admit that the comforters he disdained have spoken truly: time does heal, however slowly, however one resists the healing. When the first month ends, he goes again to visit Yitzḥak’s grave. “He traveled,” Yehosef writes in a note to Poem 12, “until he had nearly reached the cemetery, when he stopped and thought”:

The “treason” Hanagid fears committing is inevitable. Though kept alive by him, the “flame of parting” will be a modest one, not the raging conflagration of Poem 10. And the fifteenth poem marks another turning point. In it, Hanagid attends a shiva himself, one whose family has lost a beloved brother, too. He has now crossed the divide between mourners and comforters to its other side, even though he seeks to assure Yitzḥak that “every tear those mourners cried / fell, in my heart, for you.” Yes, his experience has been his own and no one else’s—but so is the experience of the family he is visiting. Ultimately, we all do go through the same thing.

Poem 18 is written on the anniversary of Yitzḥak’s death. For the first time in the sequence there is humor, a wry wistfulness testifying how far Hanagid has come from his initial devastation. He can now smile at the fantasy of seeing Yitzḥak again and speak to him, not in the distraught and guilty tones of the earlier poems, but with a bantering camaraderie:

All this leads up to the magnificent nineteenth and final poem, written, according to Yehosef, when at last Hanagid’s grief had passed and, “consoled, he mourned no more.” It is a hymn of thanksgiving and acceptance—of thanksgiving for being able to accept his acceptance, both of Yitzḥak’s death and of his own recovery from it:

It has taken Hanagid a year to reach some kind of closure. His poems’ division of this year into the news of his brother’s death, the funeral, the first week, the first month, and the following eleven months closely follows the periodization given in the talmudic tractate of S’maḥot and Jewish ritual practice.

Is this only because he was mourning as a Jew, or does the Jewish calendar of mourning reflect the natural workings of the human heart? A week, more or less, may be what is needed to absorb death’s first shock; a month for the numbness to start wearing off; a year to feel fully oneself again. The cycle of the year, at the end of which nature has returned to its starting point while human life has not, is emblematic of all that will never and will always change, of all that will always and will never pass.

Although not the only imaginable amount of time in which to mourn, it seems a right one.

An Unparalleled Document of Jewish Mourning