How Many Plagues Were There Really in Egypt?

The answer depends on how one punctuates the Bible’s Passover story. 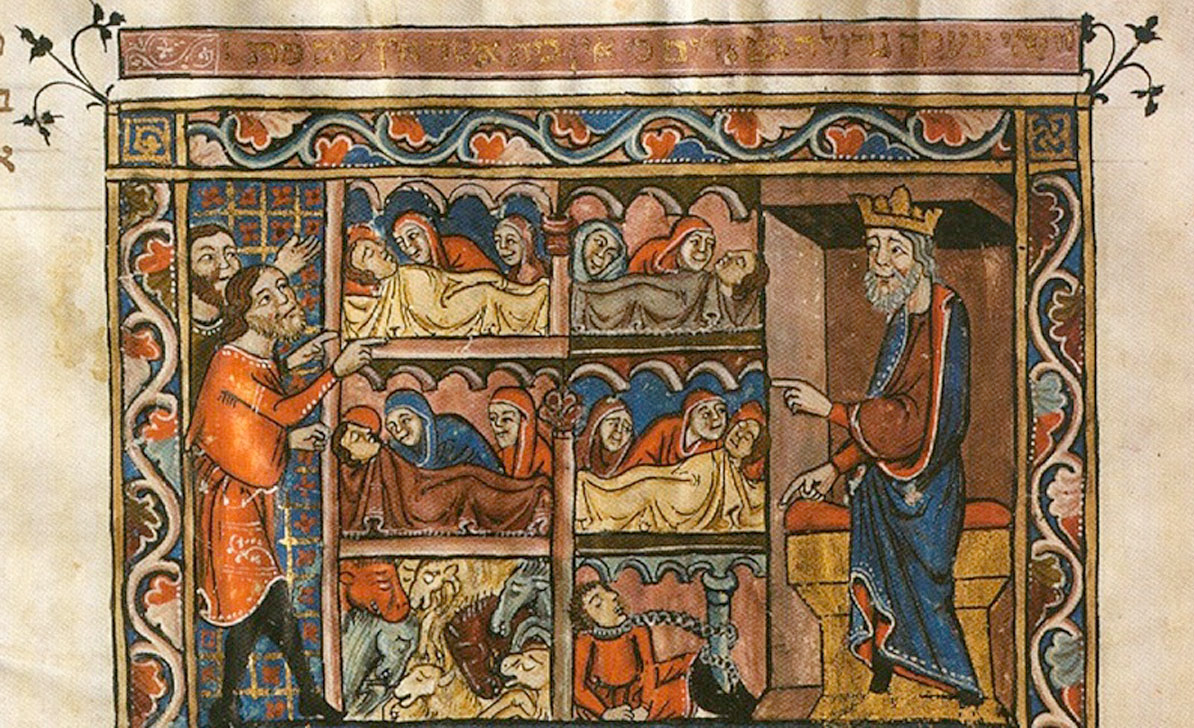 The Death of the First Born from the Rylands Haggadah, created in Catalonia, Spain sometime around 1330.

Not everyone is fond of the passage in the Passover Haggadah in which three early rabbis—Yosi the Galilean, Eliezer, and Akiva—compete by means of rudimentary algebra to see who can inflict more plagues on the Egyptians at the Red Sea. Yosi, observing that the book of Exodus tells us that the ten plagues in Egypt proper were the “finger of God” but that His “great hand” was at work at the sea, turns this into the five-fingered equation 1/10=5/x, in which x, the number of punishments meted out at the Red Sea, equals 50. Eliezer, claiming that there were not ten but 40 plagues in Egypt proper, gives us 200 as the correct value for x, and Akiva then outdoes him by proposing 50 plagues in Egypt and a value for x of 250.

For whoever feels that ten plagues were quite enough, this is unedifying.

Eliezer and Akiva rely for their equations on the 49th verse of the 78th Psalm, which is a poetic retelling of the Exodus story. The books of the Bible were not written with punctuation (which, as many a bar-mitzvah knows, is part of what makes reading aloud from a Torah scroll so difficult), and a reasonable English version of 78:49’s original unpunctuated version would be, “He [God] let loose upon them [the Egyptians] His fierce anger [ḥaron apo] wrath [evrah] and indignation [va-za’am] and trouble [v’tsarah] a company of evil angels [mishlaḥat malakhei ra’im].”

Eliezer arrives at 40 plagues in Egypt proper by multiplying the ten plagues by the fourfold enumeration in this verse of “wrath,” “indignation,” “trouble,” and “a company of evil angels.” Akiva, for his part, makes it fivefold by adding “His fierce anger.” Using modern punctuation, in other words, Eliezer would have written the verse, “And He let loose upon them His fierce anger: wrath, and indignation, and trouble, a company of evil angels,” treating wrath, indignation, trouble, and evil angels as fierce anger’s four expressions. Akiva would have put a comma instead of a colon after “fierce anger,” converting it into the first of a series of five.

Eliezer and Akiva did not, of course, know about colons and commas. Yet a rabbinic system of punctuating the Bible did develop in talmudic times in the form of the Masoretic ta’amey ha-mikra, the cantillation or chant signs that were codified in Palestine and Babylonia between the 7th and 10th centuries. Although we tend to think of these signs as musical instructions, they also serve a grammatical and syntactical purpose and are often analogous, in the way they break up sentences, to our modern punctuation marks. While the codification of these signs took place many centuries after Eliezer and Akiva’s algebraic dispute, it is worth asking whether they throw any light on it.

There are several dozen cantillation signs, some extremely common, others occurring rarely. Classifying them in terms of the power relations of their day, the Masoretes, the textual scholars who developed them, divided them into several groups. The most powerful were the “emperors,” signs that marked, like our periods, the ends of sentences or, like our colons and semicolons, full stops within them. After them came the “kings,” which separated phrases from each other as do our commas and dashes, followed by “ministers” or “subordinates,” which separated words within phrases. There were also “servants,” which linked words within a single phrase to indicate that they were closer to each other than to other words in the same phrase.

How do the Masoretes punctuate Psalms 78:49? They start by giving “He let loose upon them,” Hebrew y’shalaḥ bam, a cantillation sign called pashta, a minister that separates this verb and its pronoun from the direct-object nouns that follow it. Ḥaron apo, “His fierce anger,” receives a munaḥ, which is a servant, followed by a r’vi’i, a minister—the first sign to show that these two Hebrew words are closely linked, the second to set them apart from the next words. Evrah, wrath, and va-za’am, “and indignation,” both have a munaḥ again, while v’tsarah, “and trouble,” takes an etnaḥta, an emperor that creates a mid-sentence stop. Finally, the phrase mishlaḥat malakhey ra’im, “a company of evil angels,” concludes with the emperor of a sof-pasuk, an end-of-sentence stop.

According to the Masoretes’ punctuation, therefore, the ten plagues could have been either tripled or quadrupled at the Red Sea, not quadrupled or quintupled. If Akiva is right that “His fierce anger” is on a par with “wrath and indignation and trouble,” we have a series with four elements. If Eliezer is right that it includes them, we have a series with three. In either case, “a company of evil angels” does not belong to the count.

That the Masoretes were probably right about Psalms 78:49 is borne out by the parallelistic structure of the entire chapter. Parallelism is a basic technique of biblical poetry whereby the second half of each line repeats or amplifies the first in different language. Thus, 78:47-48, which describe the plague of hail, read: “He destroyed their vines with hail; and their sycamore trees with frost. He gave up their cattle also to the hail; and cast their flocks to hot thunderbolts.” The words following the semicolon—the ethnaḥta of the Masoretes—rephrase the plague described by the words preceding it. “A company of evil angels” is similar.

At most, then, there were only 200 plagues at the Red Sea—and possibly, some of you will be happy to hear, as few as 150.

How Many Plagues Were There Really in Egypt?