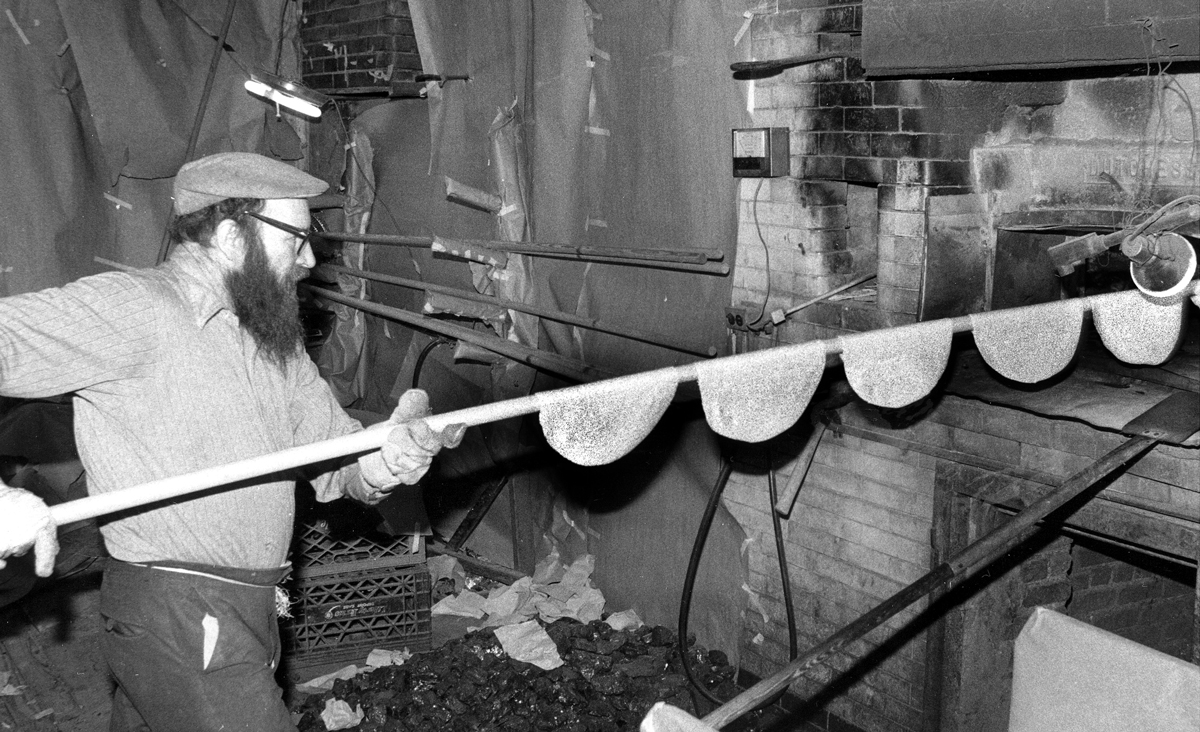 They came from all over Moscow. In the 1950s and 60s, beginning about a month before Passover each year, they’d get on an elektrichika streetcar and travel an hour or more to the Bolshevo station on the outskirts of the city, lugging suitcases or large woven bags—anything big enough to hold a carton of matzah without raising the suspicion of informers or the official enforcers of Soviet anti-Jewish oppression. Of those who came more or less surreptitiously to the Bolshevo home of Aharon Chazan, some purchased his round handmade shmurah matzah, others the square and less expensive hand-cranked “machine” kind.

And just as the Chazans were not alone as producers, so their patrons were not alone as consumers. To the contrary: despite all the obstacles thrown up by the regime, and whether it was baked in one’s own oven, procured from the Chazans’ home enterprise or others of a similarly illegal kind, or in lenient years from state or quasi-legal synagogue bakeries, for tens if not hundreds of thousands of Soviet Jews, matzah on Passover was a not-to-be-breached imperative.

“They weren’t only religious Jews who came to our house to buy matzah,” stresses Chazan’s daughter, the seventy-eight-year-old Devorah Greenberg. “Everybody looked for it. They’d ask each other, ‘Do you know where I could find some? I want to buy.’ That’s how they heard about my father’s matzah; it was all word of mouth.”

The history of matzah in the Soviet Union is complex. As with other aspects of religious observance, the state never explicitly prohibited its production or consumption. But finding it was not always easy or straightforward. During the Communist regime’s early decades, hundreds of tons were produced annually in state-owned bakeries. Although a moneymaker for the regime, and widely available, its Jewish consumers could still face fallout for purchasing it, especially if they were members of the Communist party. But by the late 1950s, a renewed clamp-down on religion initiated by Nikita Khrushchev caused a scarcity, and matzah became harder to procure legally. It was then that Aharon Chazan constructed his special matzah oven, hidden away inside the freestanding Russian stove that heated his home.

Like thousands of other Jewish refugees, the Chazan family, members of the large Chabad-Lubavitch community in the USSR, had spent the war years in Soviet Uzbekistan. At war’s end, they arrived in Moscow on their way to Lvov (formerly Lemberg), which had belonged to Poland before the war and where they hoped to procure forged documents and escape to the West. But they were too late. By late 1946 the Iron Curtain had fallen, and the Chazans were destined to remain in or around Moscow for the next decades.

A staunchly religious man, Chazan would travel each year to the heavily Jewish suburb of Malakhovka to purchase shmurah matzah. He took a few of his children along with him to witness the baking for themselves—and to remember what they saw. “They baked the matzah in a private house,” reports Devorah Greenberg, who can still name the train stations they passed along the way. “My father would buy enough for the whole Pesaḥ.”

Then, in 1958, upon the birth of their tenth child, Leah Chazan attained the exalted status of a “mother heroine” (mat’ geroinya) of Communism, and the family received a small plot of land in Bolshevo. There, Aharon built the family home. Devorah, who had married at seventeen, lived with her husband and children in one room while, separated by the kitchen, the rest of the Chazans inhabited the other. During the year the family often hosted the neighborhood’s Sabbath prayer service. As Purim came around, their home was transformed into a matzah bakery for the weeks before Passover.

“We baked at night. All of us children took part,” says Greenberg’s younger brother, Rabbi Avraham Chazan, now in Israel. “We made round matzah for ourselves and for a few other ḥasidic families in Moscow, and square for everyone else. I remember cutting the machine matzah with a knife to make it square.” Devorah Greenberg adds: “My husband and brothers also used to deliver matzah” to the many elderly people who couldn’t undertake the journey.

Rendering the operation illegal was the fact that Chazan hired people to work in the bakery and sold the matzah; under Khrushchev, prosecutions for economic crimes were multiplying, and were often invoked as a pretext for curtailing religious activity altogether. In the secretive atmosphere of the time, the children knew many of those who frequented the Chazan’s home solely by their nicknames (“Red,” “Blackie,” “Shorty,” and the like). But there was on exception: Velvl Bogomolny, a kosher slaughterer (shoḥet) who was employed by Moscow’s Choral Synagogue and who would regularly bring kosher meat to the Chazans and purchase their shmurah matzah.

To this day, the surviving children remember Velvl Bogomolny well, describing him as a sincerely God-fearing man who was no stranger in their home. But then, one bright day in April 1963, “all of sudden he was gone,” says Avraham Chazan, who was nine at the time.

Rivkah Blaustein, then Rivkah Bogomolny and aged twelve, vividly recalls the eve of Passover 1963 when her father failed to come home and in the middle of the night she and her two sisters were awakened by banging on the door. Having arrested their father, the KGB had now come to search the house.

Velvl had been born in a shtetl in Ukraine. After the death of his parents—his father was lynched by a local mob—the fifteen-year-old boy was sent to Odessa to live with his uncle, who in turn shipped him off to a branch of the underground Lubavitch yeshiva system. (A year later the authorities would shut down that local branch.) Surviving the war in Tajikistan, he, like Aharon and Leah Chazan, moved to Moscow where he enrolled in the officially sanctioned rabbinical school founded by the city’s then-chief rabbi. There he mastered the laws of kosher slaughter.

Over the decades, Moscow’s Choral Synagogue had been variously permitted and then forbidden to produce matzah; in the early 1960s, it came under significant pressure to keep the bakery closed. Announcing the news, Chief Rabbi Yehuda Leib Levin urged the city’s Jews to bake their own matzah at home. By 1963, however, it seems that matzah was again being prepared under the auspices of the synagogue. This was the operation in which Bogomolny was involved when he was exposed and arrested on charges of profiteering from the illegal sale of matzah. Carrying the unleavened bread for delivery, he had flagged down a taxi outside the Choral Synagogue. The driver was a KGB agent, and the list of eighteen addresses found on Bogomolny’s person would later be presented in evidence at his trial.

The trial of Bogomolny and three other members of the operation began on July 16, 1963. Called to testify on behalf of the prosecution, Chief Rabbi Levin nevertheless recalled being told by a representative of the State Committee on Religious Cults that although the state could not provide Jews with matzah that year, it had nothing against the community baking matzah on its own. The court declined to summon the official to the stand, and instead all four defendants were found guilty of profiteering. One, identified as the ringleader, was released on account of his advanced age; two middle-aged women were given six months each; Bogomolny was sentenced to a year in prison camp.

The case raised a flurry of attention and was widely reported in the West. In Washington, Senator Jacob Javits of New York vigorously denounced the verdict and the final sentence on the Senate floor. “Still, nothing helped,” says Blaustein, who with her siblings would faithfully visit her father at the labor camp about 100 kilometers south of Moscow. “He became very sick in prison; he had very high blood pressure and was taken to the hospital a number of times. But they kept him there for the entire year.” As Passover 1964 neared, his wife, knowing he would eat nothing else, included matzah in a care package; the wardens passed along everything in the parcel except the matzah. For the eight days of the festival he subsisted on cubes of sugar supplied by a compassionate fellow prisoner.

After his release, Bogomolny, a man of few words, would spend much of his time studying Talmud and sharpening his sheḥitah knives. “My father did what he did,” says Blaustein, simply, “so that the Jews of Moscow could have matzah on Pesah.”

What was it about matzah, specifically, that induced so many Jews all over the Soviet Union to go to such lengths in order to secure it? These were not just synagogue goers, who consisted mainly of the pious and elderly. When it came to obtaining matzah, all distinctions fell away; even the majority, for the most part uneducated in Jewish religious practice, harbored intense feelings in this one area, feelings that continued in force until the USSR’s collapse.

A single statistic tells the tale. Working from partial data, Mordechai Altshuler in Religion and Jewish Identity in the Soviet Union has estimated that in the year 1958 alone, a total of 293,000 kilograms (approximately 650,000 pounds or 325 tons) of matzah were baked in just the four cities of Moscow, Kiev, Vinnitsa, and Zhemerinka. Altshuler also cites an internal document in which the Ukrainian representative of the State Committee on Religious Cults notes that “most [emphasis added] of the Jewish population consumes matzah, even the nonreligious ones and in some cases even Communists,” and goes on:

In Kiev it was found of workers at the newspaper Vechernyi Kiev [“Kiev Evening”] that the Communist-party members Alperin, Ozkar, Katzman, Rosen, and Kaganovich prepared several hundred kilos of matzah, exploiting their special status as newspaper workers. The matzah they purchased was kept in a storeroom at one of the furniture shops not far from the newspaper offices.

So why, when all else was forgotten or long buried under generations of ignorance and/or fear, were people willing to risk the wrath of the authorities to bake, purchase, and consume this product?

To be sure, matzah serves as an apt symbol for the perennial Jewish yearning for freedom, and for a sudden and miraculous redemption. In this respect, the parallels between the bondage and persecution of Jews in the USSR and the ancient Israelites’ enslavement in Egypt are undeniable. But it is not the only such symbol—and many of the same Jews who would so fervently seek out matzah knew nothing at all about, say, Hanukkah, another holiday celebrating victory over oppression.

A key to understanding the puzzle may reside in a message from the Lubavitcher rebbe, Menachem Schneerson, who in 1954, building on his underground work to ensure that the Jews of Russia had access to matzah, began to encourage Jewish community leaders around the world to distribute shmurah matzah to their fellow Jews. In an early talk on the subject, the rebbe quoted the Zohar’s description of matzah as the “food of healing” and the “food of faith”—faith being the sine qua non of a committed Jewish life. Despite the fact that the Hebrews in Egypt had been reduced to the lowest human level, the rebbe noted, the Talmud insisted they remained “believers and the children of believers”; later he would also invoke the unique power of matzah, in itself a “spark” of godliness, to ignite Jews with faith in God Himself.

That same spark, along with Schneerson’s words, may be what drove Aharon Chazan to risk imprisonment or worse for preparing and distributing matzah, what Velvl Bogomolny was willing to suffer a heavy penalty for, and what annually inspired hundreds of thousands of Soviet Jews to ask each other a question whose urgency their taskmasters could never fathom: “Do you know where I can find matzah this year?”