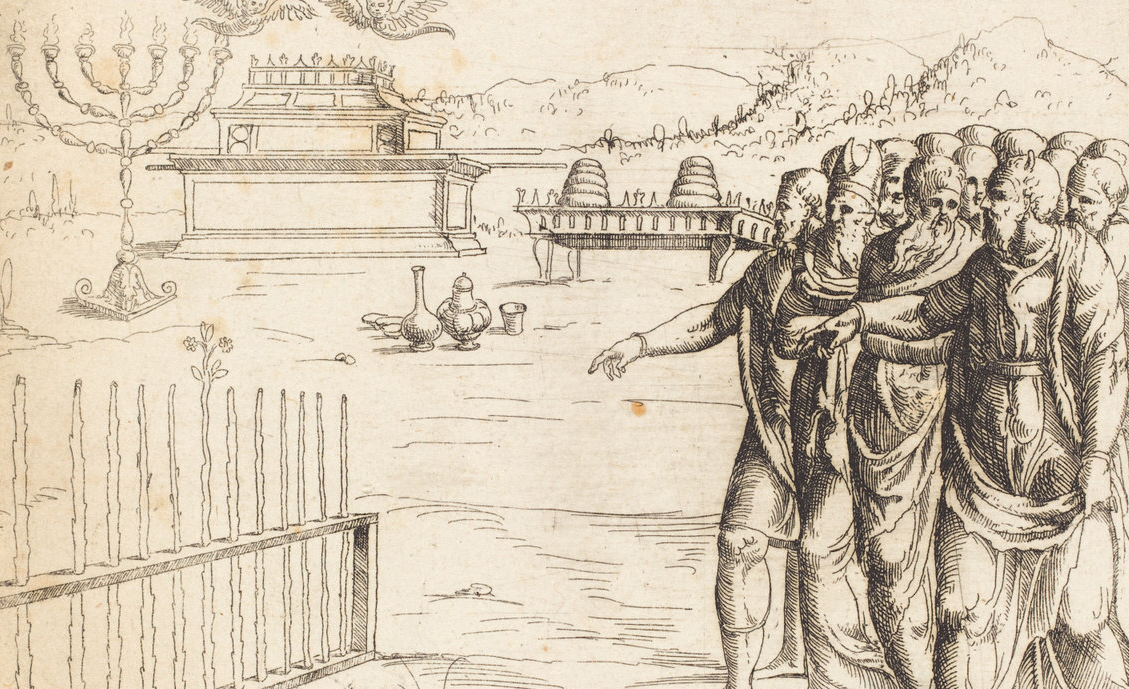 From The Blossoming of Aaron’s Rod, an etching by Augustin Hirschvogel, ca. 1553. National Gallery of Art.

But the Lord told Moses, Speak to the priests, the sons of Aaron
Tell them not to be contaminated by a soul
Of their people, all but their nearest and dearest—
Their mother and father and son and daughter and brother,
Their unmarried sister, for her he can become impure;
But for some notable among his people he won’t become impure, or desecrate himself.
They shan’t leave a bald spot on their heads or shave the tip of their beard
Nor mutilate their flesh when they mourn; they’ll be preserved for their God
And won’t desecrate the name of their God. . . .
For he’s offering the daily bread to your God,
He’ll be sacred to Me because I’m sacred, I’m the Lord who makes you sacred.

Up to this point in the week’s reading of Emor (Leviticus 21:1 – 24:23), we have a pretty harsh view of the job description for a priest. To put it bluntly, you’re not really a normal human, and your human relationships are all subject to the Boss’s vetting. You’re allowed to mourn your mother and father and your immediate family, but not your sister if she’s already married—that means she’s some other man’s concern, not yours. And don’t attend any funerals you don’t have to, because that interferes with the job.

Being a priest was a meal ticket for life, but it also meant being a slave to your job. And that’s just for the garden-variety priests. Wait till you see the requirements for the CEO:

But the High Priest, of all his brethren, whose head shall be anointed with the anointing oil
And who shall take up the office to wear the robes—
He shall not leave his hair to grow wild and shall not tear his clothes
And no dead soul shall he approach,
Not even his father and mother shall make him impure.

Further on, we have additional regulations that define the ancestry of the priest and particularly that of the High Priest; these specify that the prerogatives of the priesthood belong only to Aaron and his descendants. But here’s where it starts to get tricky. If you go back to the line that I rendered as “the High Priest, of all his brethren”—it doesn’t necessarily mean that.

The term “High Priest” is an invention of William Tyndale in his English translation of 1530; you could as easily render the phrase as “the greatest priest out of all his brethren,” which would suggest that it was always an open question who would perform the rites that were the exclusive task of the “High Priest.” The only person actually appointed to that role by the Lord was Moses’ brother Aaron, and one thing we know from an earlier parashah, Shmini, is that just being Aaron’s eldest son and the next in line, or indeed the next son after that, does not qualify you for this office. Indeed, it may qualify you for sudden death:

And the sons of Aaron, Nadav and Avihu, took each man his rake
And put fire on them and put incense on it
And they sacrificed before the Lord a strange fire
Of the kind He had not commanded them.
And fire went out from before the Lord
And consumed them and they died before the Lord.

Lest you think this was a trivial matter—a little action sequence to liven up the coming list of regulations—it was nothing of the kind. Rather, it was an exact equivalent to the killing of the first-born in Egypt: a decimation of the social order. Up in smoke went Aaron’s eldest son and presumptive successor, together with his younger brother, the next in line. So the question of lineage is only part of the tricky conundrum of who should occupy this exalted but very punishing role—a role that is entirely dependent on the lineage of your mother and father but that also separates you from any relationship with them.

I was struck by this passage because I have been reading Rabbi Binyamin Lau’s The Sages, a superb history of the Second Temple era and its aftermath that so far runs to four volumes.

Discussing the seismic shift of this period, when Judaism went from being a religion centered on the Temple to one centered on legal scholarship, Lau cites a talmudic anecdote about Shmayah and Avtalyon, two 1st-century-BCE rabbis who, despite being sons of converts, rose to the positions of, respectively, patriarch and head of the high court—the two highest decision-making roles in the Jewish legal edifice. One Yom Kippur, the High Priest came out of the Temple followed by a throng of people, but the moment the crowd saw Shmayah and Avtalyon, it immediately began to follow them instead. In other words: the masses had come to value the earned status of two lowborn scholars over the inherited status of the priest.

A number of other anecdotes involving Shmayah and Avtalyon relate to disputes on legal matters between them and the obscure sage Akavia ben Mahal’lel. In a particularly poignant one, Akavia on his death bed urges his son to follow the majority on four issues on which he, the father, had dissented; in turn, the son asks the father to commend him to the sages as a member of their circle. Akavia refuses. “Is it because you have found fault with me?” his son asks. Akavia replies that he has found none; rather, “Your acts will draw you near to [the sages] or your acts will take you far.” (Eduyot 5.7)

In other words: whatever your lineage, it is for your own actions that you will either be remembered or forgotten. (Akavia himself is all but erased from the talmudic record.)

There is some dispute as to exactly when Akavia lived. Some say he was a contemporary of Hillel the elder, which would place him just before the start of the common era; others hold that he lived in the time of Rabban Gamliel II, who was patriarch after the Temple fell in 70 CE. If the latter, then this story would be contemporaneous with another about the extent to which lineage does or doesn’t matter and how your actions affect your social position.

The Talmud offers a long account of Rabban Gamliel’s mistreatment of the head of the court, Rabbi Yehoshua; in the end, the sages are so offended that they depose Gamliel. Shorn of his position, Gamliel can no longer control the outcome of legal arguments. Grudgingly, he goes to ask Rabbi Yehoshua’s forgiveness:

He told him: I offended you, forgive me!
He paid him no mind.
He said, Do it for my father’s sake!
Immediately he relented.

Yehoshua then goes to the study house to announce Gamliel’s reinstatement in the following words:

In biblical imagery, drawers of water occupy the lowest rung of the social ladder; this lowly status—like the position of patriarch—seems to have been largely inherited. Yehoshua is invoking this humblest of professions as a metonym for the loftiest of professions in the post-Temple, post-high-priesthood era. But he is also stressing the advantage of being not just a person of high status but also the son of one. For good measure, he throws in a reference to a Temple ritual—the annual burning of a red heifer—in a ceremony to be performed only by a priest. That ritual removes the impurity that comes from contact with a corpse—the same impurity that priests are restricted from contracting at the beginning of our reading.

In brief, Rabban Gamliel’s actions have been, by common consent, inappropriate to the position he holds. He is not fit to lead the Jews. When seeking the forgiveness of the sage he wronged, who is widely considered his intellectual superior, he succeeds by appealing to ancestral right and to the past virtues of his illustrious father and namesake grandfather. For his part, Yehoshua then makes the case for Gamliel’s reinstatement by framing the issue not with reference to Gamliel’s personal qualities but in the context of the priesthood, ritual purity, and the desirability of relegating the role of purifying the ash only to priests who are sons of priests (and Aaron).

It’s worth noting that Gamliel was succeeded by his own son, Shimon, who seems to have had a much more peaceable personality and who followed his own, generally more lenient, halakhic opinions, effacing his father’s legacy even as he carried on his bloodline. Shimon’s most famous statement may be this: “Great is peace, for Aaron the priest was admired only because he sought peace.” (Perek Hashalom)

All of these stories—about the popularity of the High Priest versus that of Shmayah and Avtalyon, about Akavia ben Mahal’lel and his son, about Gamliel and Yeshoshua and Shimon—converge on a single point: the charisma of office adheres only to one who has charisma of his own. You cannot be either High Priest or patriarch by dint of lineage alone. What the Torah reading tells us, in other words, and what has continued to reverberate down the generations, is that just as the High Priest is not simply an office holder but must truly be “the greatest of his brethren,” so the patriarch should not just be the son of a patriarch but an exceptional teacher and leader of men—and a pursuer of peace, to boot.

So it’s appropriate that the High Priest not mourn his parents: though he won his high office because of them, what defines his tenure is not his ancestry but his performance. And woe to him, whether priest or patriarch, who, like Nadav, Avihu, or Gamliel, abuses the position he inherits.