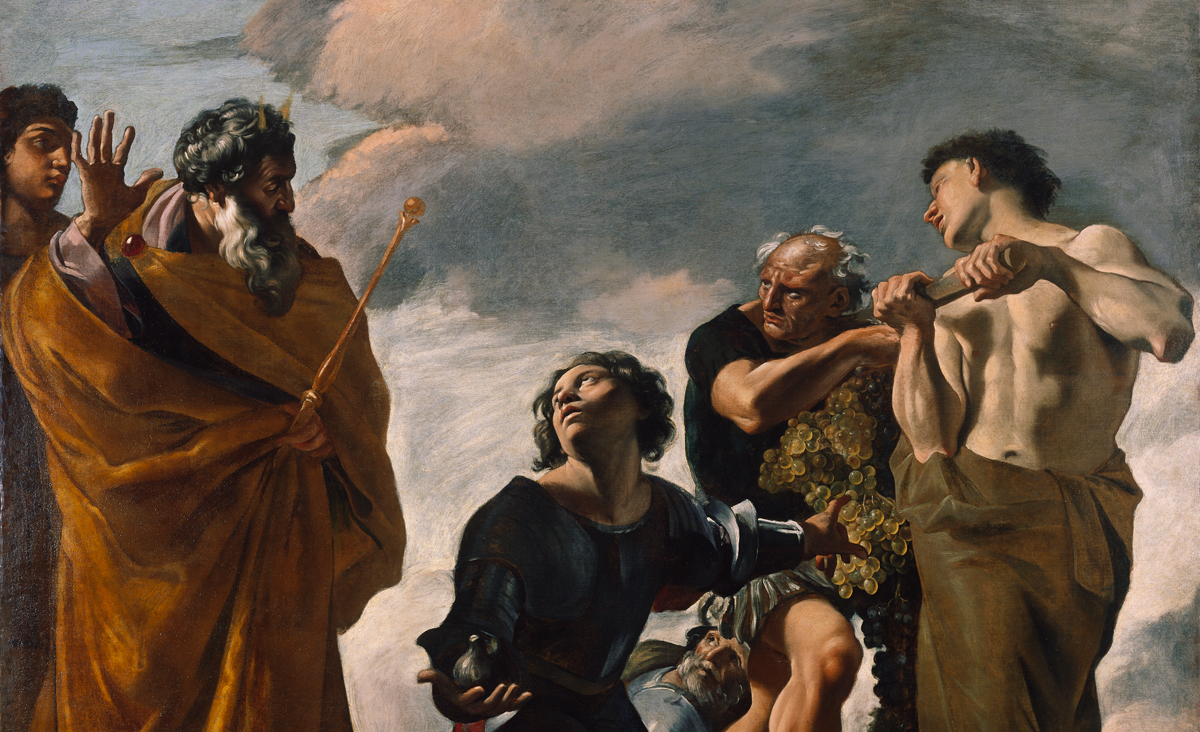 From Moses and the Messengers from Canaan by Giovanni Lanfranco, c. 1624. Getty Museum.

This week’s reading of Shlaḥ l’kha (Numbers 13-15) is unusual for focusing less on the Almighty’s relationship with the children of Israel than on the latter’s view of themselves—on what’s in their own heads. The title echoes that of Lekh l’kha (Genesis 12-17), where the Lord tells Abraham to leave his father’s house and his idol-worshipping native land and “go for yourself” to a promised land where the Lord will make him into a great nation. Our reading, analogously, begins with God commanding that select Israelites be sent from the desert encampment to scout out the promised land. But here is a crucial difference: shlaḥ l’kha means not “go for yourself” but “send for yourself.” The ensuing events reveal not what the Israelites actually see but who they think they are:

“Send for yourself some upstanding citizens to look over the land of Canaan
Which I’m giving to the children of Israel. One man apiece per ancestral house,
Send leaders from each one of them.”
And Moses sent them from the Paran desert as the Lord said,
Each of them upstanding citizens, the cream of Israel.

What follows is a list of names, most of which are never heard of again. The two exceptions are Caleb son of Yefuneh, representing the house of Judah, and Joshua son of Nun, representing the tribe of Ephraim and already firmly identified as Moses’ assistant. Just as the earlier confrontation between Jacob’s sons Judah and Joseph (i.e., the father of Ephraim) is the climax of the final narrative arc of Genesis, and just as, later, the Israelite kingdom will be split into two polities dominated by the tribes of Judah and Ephraim, here, too, we see the people’s future course depending on these same two houses.

And Moses sent them to look over the land of Canaan, but told them:
“Go this way through the Negev and go up the mountain and see the land—what is it like?
And the people who are settled on it—are they strong or feeble, many or few?
And what is the land they’re settled on—is it good or bad?
And what are the cities they’re settled in— camps or castles?
And what’s the land like—is it fat or lean? Has it trees in it or none? And you’ll grow bold,
And poach some of the fruit of the land, for the season will be that of the first grape bunches.”

Moses’ instructions seem at first to constitute a matter-of-fact protocol for a research expedition on behalf of, say, a major corporation wanting to invest in local produce. But his actual objective lies in the one word v’hitḥazaktem, “and you’ll grow strong” or, as I’ve rendered it here, “and you’ll grow bold,” following Tyndale’s translation of the Lord’s instruction to Moses regarding Joshua in Deuteronomy 1:38. But there Moses is instructed to embolden Joshua, while here the spies are instructed to embolden themselves. That is, if you feel strong, you’ll gather the courage to steal some of the fruit of the land, an act that will make you even more confident.

As elsewhere in the Torah, there is both a superficially obvious purpose for this command and an underlying purpose. The obvious purpose is to have something to bring back and show the folks back in the desert, thus whetting their appetite for redemption. The real purpose, I suspect, is to demonstrate whether in fact they have the nerve to steal a bunch of grapes; if not, how will they ever muster the nerve to make the country their own?

So the scouts go and look and do swipe some grapes. After 40 days, they come back to report to Moses and the assembled nation. And that’s when the trouble starts.

But they reported to Moses, saying: “We entered the land where you sent us
And indeed it’s dripping with milk and honey
And this is its fruit. But it’s pointless
Because the people settled there are fierce
And the cities highly fortified
And we also saw descendants of giants there.”
But Caleb hushed the people to attend Moses
And said, “Up, up we’ll go and inherit it
Because we’re tough enough to take it.”

This opening round already presages what will follow. Except for Caleb and Joshua, the spies are entirely despondent, and in reaction the people are restless and murmuring to the point where Caleb has to silence them. It’s Caleb and Joshua who say exactly what all of the spies were supposed to say; they alone have the can-do attitude. To no avail:

But the upright citizens . . . said: “No,
We can’t go up to this people because they’re stronger than we are.”
And they slandered the land they’d looked over to the children of Israel, saying:
“The land we passed through to look over is a land that devours its settlers
And all the people we saw in it are big folk.
And there we saw gargantuans, sons of giants borne of gargantuans,
And we became grasshoppers in our own eyes
And so were we in their eyes.”

There has been considerable rabbinic debate over this episode and the nature of the sin committed by the Israelites. Was it a sin to send spies at all? Should faith alone have sufficed? I think the answer lies in the key phrase in this passage: slandering the land. The term used, l’hotsi dibah, is the same term applied in Genesis to the young Joseph’s spying on his brothers and reporting their infractions to their father. That misplaced use of his status as favorite son lands him in trouble with his brothers and gets him stripped of his cloak and thrown in a pit. Someone inclined to deal in dynasties, like the Lord, might even consider that Joshua, a descendant of Joseph, has been sent to “atone” for his ancestor’s slander by refraining from slander here. The punishment for Joseph’s slander was enslavement and exile, the reward of Joshua’s restraint is self-liberation and return to his ancestral home.

But there’s another sin as well, a psychological one. The spies perceive themselves as grasshoppers, tiny and ineffectual insects. What’s worse, they’re sure the natives see them that way, too. But how would they know that? Their sin, in other words, is not in seeing but in interpreting what they see—and the only thing they can see is their own fear within.

The Israelites who left Egypt were slaves who’d been trained for generations to keep their heads down and not make trouble. They’re used to subservience, to living in fear. And so when the spies see these tall people going about their business without a fear in the world, what they experience is their own fearfulness. And the people hearing their slanderous reports become infected with the same fear:

And the whole community carried on and raised their voices, and the people wailed that night,
And all the children of Israel clamored to Moses and Aaron, saying:
“Couldn’t we have died in Egypt or this desert, couldn’t we have died?
Why is the Lord bringing us to this country
to die by the sword? Our women and children will be spoils.
Aren’t we better off going back to Egypt?” . . .
But Moses and Aaron fell on their faces before all the crowd. . . .

The leaders of Israel are faced here not with rebellion or a violation of the law but with something much slipperier: an emotional weakness, a giving way to fear. Moses had tried; he told the spies to “grow bold.” But how do you teach people to be bold? Moses and Aaron are at a loss; all they can do is pray. Caleb and Joshua, the two destined to lead the next generation, tear their clothes in mourning—but they don’t give up:

But they addressed all the community of the children of Israel, saying:
“The land we passed through to look over is a very, very good land,.
If the Lord wants us, He will bring us to this land
And give us a land which is dripping with milk and honey. . . .
The Lord is with us. Have no fear of them!”
But the whole community was about to pelt them with stones
And the glory of the Lord appeared in the meeting tent to all the children of Israel.

The people are about to execute their leaders as heretics when the Lord arrives like the proverbial cavalry. As usual, He is ready to wipe out the whole lot of them; as usual, Moses manages to bring Him around. This time, though, the Lord’s forgiveness comes with a sting in the tail:

And the Lord said, “I’ve forgiven, as you said. But as I live, and as the glory of the Lord fills the earth,
Perhaps these people who have seen My glory and My marks that I made upon Egypt and in the desert,
But tried Me these ten times and did not obey me,
perhaps they should see the land I swore to their ancestors—
But all those who blaspheme against Me shall not see it.”

What then will become of the Israelites if they are not to enter the land?

“In this desert your carcasses shall drop,
All of you who were numbered, in all your multitude,
Anyone twenty years and above who clamored against Me. . . .
But your children who you said would be spoils
Shall be there, and I’ll bring them in and they’ll know the land that you disdained.
And your children will be shepherds in this desert 40 years
and bear your unfaithfulness. . . .
You’ll bear your wrongs, and you shall comprehend how I move.”

There are two terrible things in this speech. The first is the simple death sentence meted out to the present generation. The second is the lesson contained in the final line. God has grudgingly allowed that He won’t act out of pique. But He has decided that this generation is beyond reaching and beyond teaching; as far as He’s concerned they are already dead where they stand. So the purpose of the 40 years of wandering in the desert is not just to wait while they die of natural causes. No, they and their example are the means by which their children will be educated to be different.

As for that chilling last line, some take it to mean that the Israelites will know the motions by which the Lord will rattle them around the desert for four decades. To me it’s much more disturbing. It’s saying, “You are too hopeless to live, but in the 40 years of wandering this desert as you die, your children will finally internalize how I think. They are Mine.”

This parashah’s final act brings the lesson home. The Lord having pronounced sentence, some of the Israelites repent, misguidedly, and undertake to launch an invasion of the land on their own. Warned not to, they proceed anyway.

. . . but they were reckless and climbed the mountain top,
But the ark of the Lord’s contract and Moses did not stir from the midst of the camp.
And the Amalekites and Canaanites who settled on the mountain came down
And cuffed them and cut them down till they were no more.

Without the Lord, these Israelites are just who they feared they were, so many grasshoppers, easily wiped out by the enemy. Their children will learn to confront their fears and not project them onto the tribes who will fall before their advance. They’ll learn not to look inside themselves and fear, but look outside and see things as they are.