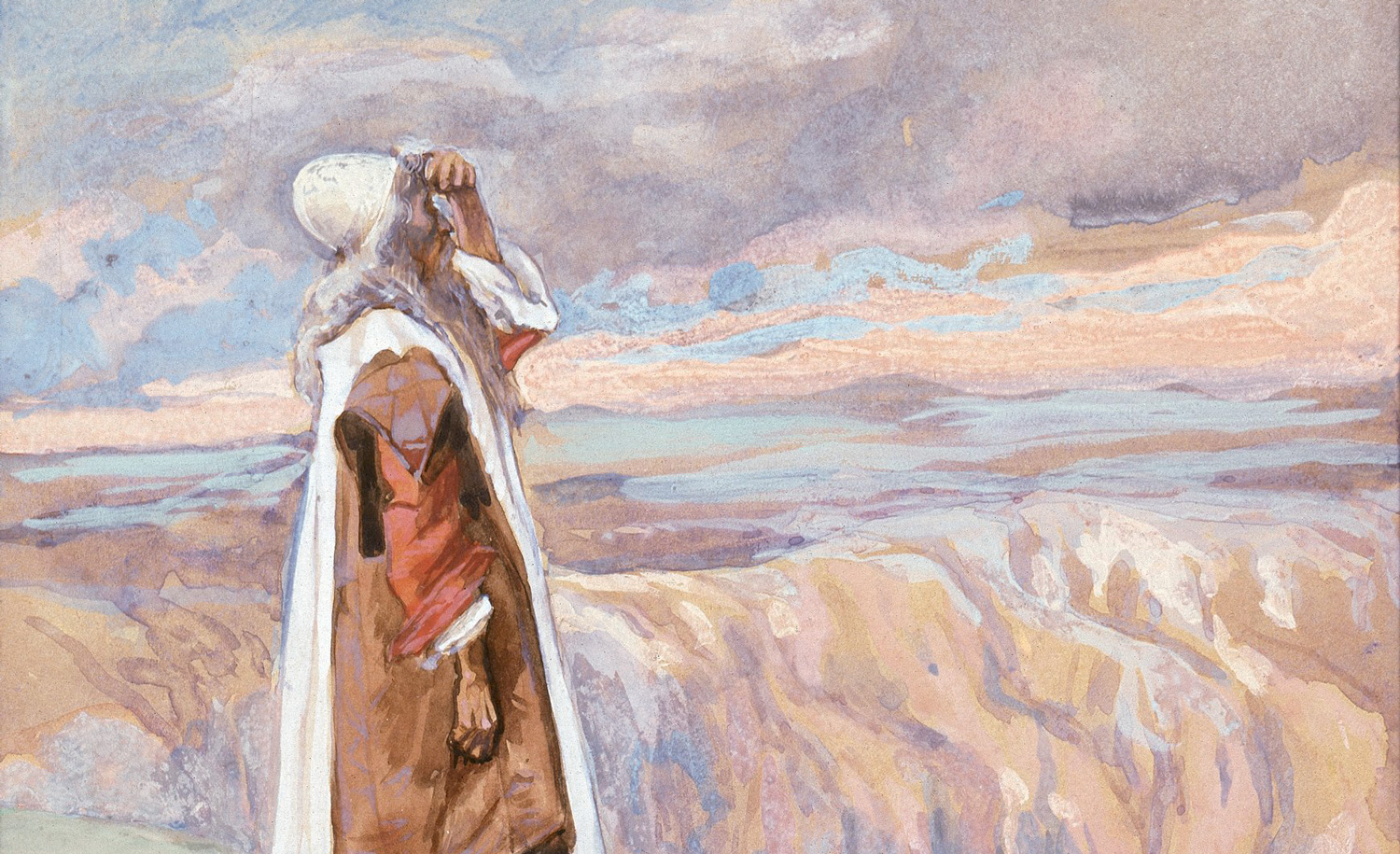 To judge by its name, this week’s Torah reading of Pinḥas (Numbers 25:10-30:1) appears to be about its title character, the grandson of Aaron the high priest, whose heroic deed leads to a spectacular if ambiguous reward. But upon closer examination the reading turns out to be about something different entirely: namely, one of the most profound paradigm shifts in all of Jewish history.

The story starts earlier, in the closing passages of the previous week’s reading of Balak:

A bit like the silly younger sisters in Jane Austen’s Pride and Prejudice, eager to flirt with the regimental officers passing through town, the Moabite girls go chasing after the Hebrew soldiers and, rather than inviting their swains to tea, invite them to join ceremonial offerings to their god Baal-Peor where they can have a little something to eat, pay their respects to the local deity, and become acquainted. The consequences, though, turn out to be far direr than a shotgun wedding:

And the Lord told Moses, “Take all the leaders of the people
And string them up for the Lord in broad daylight
And the Lord’s wrath will wash away from Israel.”
And Moses told the judges of Israel, “Kill each man his upstanding citizens
Who have gotten attached to Baal Peor.”

But along came an upstanding citizen of the Jews,
Bringing among his brethren a Midianite girl
Before Moses and before all the community of Jews.
And they were weeping at the opening of the meeting tent.

Why are they weeping? Because what happens here threatens the foundations of the social order. You can wipe out a few idol-worshippers, even a few thousand of them. But when an upstanding Jew, who will shortly be identified as a prince of one of the tribes, brings forward his Midianite paramour, soon disclosed to be a Midianite princess, Moses is rendered entirely helpless—reduced to tears along with the rest of the faithful.

This isn’t just a case of interfaith dating; it’s not even simple idolatry. It’s a royal coupling at the highest echelon of the two peoples. And it takes place not in the context of an implied conversion to monotheism, but in the midst of an idolatrous feast. And why is Moses helpless? Because (as Rashi glosses the Talmud) had he opened his mouth in protest, the prince would have asked why it was permitted for Moses to take a Midianite wife but not for him.

This requires someone else to respond:

But Pinḥas son of Elazar, the son of Aaron the Priest, saw
And rose out of the congregation and took a lance in his hand
And followed the upstanding Jew into the hall
And he stabbed both, the upstanding Jew and woman in her bowel,
And the plague was stopped from upon the Jews.
But there were twenty-four thousand dead from the plague.

Here, unlike in other, similar passages, it’s not Moses’ prayers or Aaron’s burning of incense or even the use of a magic staff that will curb divine wrath; it’s a single, savage act of public vengeance. This episode marks the beginning of the end of Moses’ time as leader of the Israelites. He stands aside as Pinḥas takes the Lord’s vengeance. Indeed, the time of charismatic leadership itself has passed. What will happen next is a transition to the power of strongmen and enforcers, not prophets.

And that’s what this week’s reading is about. It begins thus:

The Lord spoke to Moses, saying: Pinḥas son of Elazar, the son of Aaron the Priest,
Has turned back My fury from the Jews,
When he was zealous in My zealotry among them
So I did not end the Jews in My zealotry.
Therefore I say, I herewith grant him My peace treaty
And it will belong to him and his children after him,
A treaty of perpetual priesthood, due to his zealotry for his God
And atoning for the Jews.

The text keeps harping on Pinḥas’s lineage precisely because by itself it entitles him to nothing. Despite the fact that he’s the high priest’s grandson, he won’t even be next in line if another heir dies. When the hereditary priesthood was created, it was granted to Aaron and his four sons; any subsequent sons born to them would inherit it. But Pinḥas, born prior to his father’s inauguration, was destined to be an ordinary Levite. It’s only at this moment, after he kills the two offenders, that he becomes not only a priest but the designated successor to the high priesthood after his father Elazar.

Some interpreters suggest that the Lord requites Pinḥas not with perpetual social status but with perpetual social constraint. Hereafter, Pinḥas and his descendants will no longer be permitted to step out of their highly circumscribed social role; there’ll be no more impulsive grabbing of spears and public executions. But I think this reading, appealing though it may be to modern sensibilities, goes against the grain of the text. Instead, this is the first of a series of transferrals of authority from Moses, of a shift from charismatic authority to institutional authority and from the rule of judgment to the rule of law.

It’s telling, then, that in the next passage the Lord instructs Moses on how to divide the land among the tribes by means of a lottery system: that is, a system that doesn’t require the judgment of a leader at all. Next, He informs Moses that he won’t be the one doing the dividing:

And the Lord said to Moses, “Go up to this border mountain
And see the land I’ve given to the Jews.
But you’ll see it and be gathered to your people,
You, too, as Aaron your brother was gathered,
Since you disobeyed Me in the desert. . . .
But Moses spoke to the Lord, saying: “Let the Lord, God of the spirits of all flesh,
Appoint a man over the community
Who can go out before them and come before them
And who will take them out and bring them in.
And let the community of the Lord not be a flock that has no shepherd.”

I find this passage heart-breaking. Moses does not ask anything for himself. All he wants is to make sure this troublesome, stiff-necked lot finally get to the promised land. He has no objection to being left out; his only worry is that the rabble Israelites might throw themselves over a cliff like a bunch of stampeding sheep the minute his eyes are shut.

And the Lord said to Moses, “Take yourself Joshua son of Nun, a man who has the spirit in him,
And lean your hand upon him.
And stand him up before Elazar the high priest and before all the community
And instruct him before their eyes.
And you’ll settle some of your majesty on him,
So the whole community of Jews will obey.
And he’ll stand before Elazar the high priest
And he’ll ask him the sentence of the seeking stones before the Lord.

I don’t think we can completely appreciate this last passage without referring back to the one before it: the story of the daughters of Zelophehad, which links the division of the land to Moses’ retirement. The contrast between the two episodes underscores the dramatic political transition that is the theme of this parashah. Here Zelophehad’s fine young daughters come before Moses and assert their claim to the land their father would have been granted had he not died in the wilderness, without sons. Moses takes their case to the Lord, who rules that women can indeed inherit.

Part of what comes through in this passage is Moses’ uniqueness. He is prophet, legislator, judge, and ruler all at once. When the daughters of Zelophehad question the law, Moses has a direct line to God—who clarifies (or perhaps changes) the law in response. No leader will ever again possess this kind of authority. Other prophets occasionally relay the Lord’s specific wishes, but they don’t legislate, and they certainly can’t propose amendments to the Torah.

There will be a new leader, and the Lord tells Moses how to appoint him and exactly where to place him in the social order. There will be prophets, but they’ll serve as social gadflies, as critics or advisers to kings, not socially instituted leaders in themselves. Even Samuel, the most Moses-like prophet, a judge as well as a social commentator, will end up spending much of his career establishing and supervising the monarchy.

Moreover, while Aaron was subject to Moses’ authority, Joshua will be subject to Elazar’s—and neither one of them will be a charismatic leader. When there’s a question to ask—such as when and how to go to war—Elazar will be able to consult with the Lord via the sacred stones embedded in his ritual breastplate. But this method is more like sending a telegram and waiting for a cryptic reply; Moses had the number of the Lord’s cell-phone. God is about to step back a bit and give His people a taste of independence—no Moses, no manna from heaven. He’s like a parent sending his children off to college who’ll be around to pay the bills and give occasional advice but won’t be there to make dinner every night.

It’s no coincidence that the story of the daughters of Zelophehad comes just before Moses receives his severance package, because this is the last time he’ll play his unique role as mediator between God and Israel. He’s now to be succeeded by Joshua, who first appears as the man who leads the Jews into battle and, in the book named after him, will emerge as a warrior-chieftain rivaled only by David—except that he’s David without the poetry. He’s a man like Pinḥas (who will soon take over as high priest himself): he knows when to pick up a spear and what to do with it.

Pinḥas marks the transition from Moses’ five books to Joshua’s one book, from moral exploration and moral magic to statecraft and battle cries. From now on, Judaism will not be about making the law but about keeping it—and about keeping the land.