How Jewish Leap Years Came to Be Calculated

The method, developed by the Babylonians and kept alive by medieval Jews, is known in Hebrew as the “secret of impregnation.” 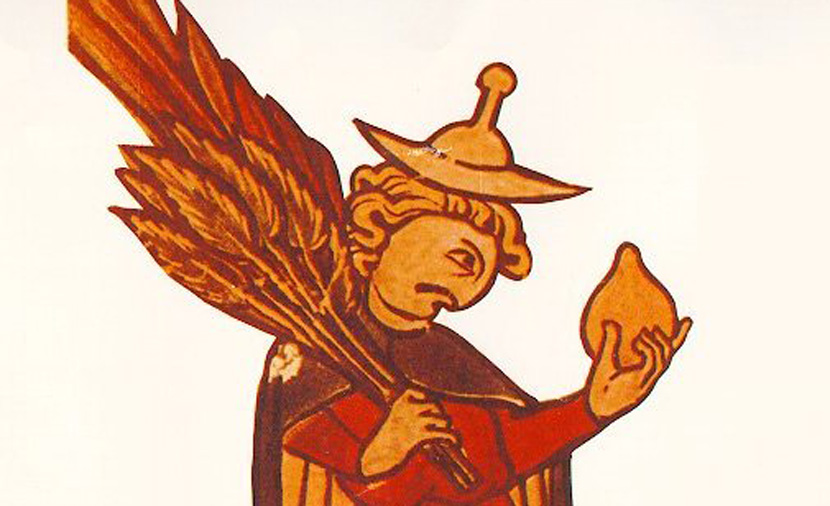 A detail from a medieval Hebrew calendar. Wikipedia.

The Jewish year 5777 has been slow in arriving. In fact, it has pushed things practically to the limit, since the latest date in the solar calendar on which the lunar-calculated first day of Rosh Hashanah can fall is October 5—only two days later than its occurrence this year. That’s because 5776 has been pregnant, as was 5774.

A “pregnant year”—shanah me’uberet—is the Hebrew term for a lunar leap year, and it has been in use at least since talmudic times. The Hebrew verb l’aber means to impregnate, and ubar is a fetus, and it’s easy to see why a year with an extra month is suggestive of a woman with child. The act of intercalation, or adding more days to the year, is known in Hebrew as ibur ha-shanah, “impregnation of the year”; the method of calculating it as ḥokhmat ha-ibbur, “the science of impregnation,” or sod ha-ibbur, “the secret of impregnation.” Both terms reflect the fact that in ancient times, before fixed calendars existed, determining leap years was not a simple matter.

Intercalating a lunar calendar is a necessary measure if one wishes to keep it aligned with the solar calendar. The length of a lunar month—that is, the time between one new moon and the next, or between any phase of the moon and the next exact recurrence of it—is 29.53 days. This means that a lunar year of twelve months has 354.36 days in it, almost 11 days fewer than the 365.25 days of a solar year.

Let us imagine a year in which Rosh Hashanah comes out on the solar date of September 20. Without occasional lunar leap years, it would slip back the following year to September 9, the year after that to August 29, then to August 18, and so on, returning more or less to its starting point 33 years later. Religious holidays would lack all seasonal associations—as indeed they do in Islam, which has a lunar calendar like Judaism’s but no leap years.

Intercalating lunar years is an ancient practice. The Chinese did it many thousands of years ago, as did the Babylonians, whose method was to add a thirteenth month after their year’s last month of Adaru, which occurred in late winter-early spring. Yet until the first millennium BCE, intercalating was done everywhere on an ad-hoc basis. Whenever the lunar calendar began to slip too noticeably vis-à-vis the solar calendar—when, say, autumn leaves began falling in late summer—the ruler or king would decree an extra month to restore the balance.

The “secret of impregnation” that enabled lunar intercalations to be regularized was discovered only in the mid-8th century BCE, again by the Babylonians. It was their mathematicians who first realized that if seven leap months of 29 or 30 days, totaling 207 days altogether, were inserted at predetermined intervals into every cycle of nineteen years, the lunar dates, though sometimes moving ahead and sometimes dropping behind, would in time keep abreast of the solar ones. Using whole months, no shorter cycle could accomplish this.

This nineteen-year cycle, however, was never actually used by the Babylonians for everyday purposes. Known to historians as “the Metonic cycle,” it is named for the 5th-century-BCE astronomer and mathematician Meton of Athens, who apparently came up with the idea on his own and managed to get it adopted by his fellow Athenians. Yet it never spread beyond Athens, and it vanished there, too, once the Roman Empire introduced the solar Julian calendar in much of Europe and the Middle East. Nor were the Jews, who took the Babylonian month names for their own during their exile there following the destruction of the First Temple in 586 BCE, quick to make use of it, either.

This is made clear by the tractate of Sanhedrin in the Babylonian Talmud. Although medieval Jewish tradition held that the Metonic cycle was already part of the Jewish calendar in the talmudic period (that is to say, between the 3rd and 6th centuries CE), a lengthy discussion of intercalation in Sanhedrin shows that this wasn’t the case. The onset of a pregnant year, it is explained there, is decided upon in the previous year by the delegated rabbinic authorities on the basis of three indicators: the arrival of spring and its vegetation, the ripening of summer fruit, and the timing of the vernal and autumnal equinoxes. Should the authorities decide to add a thirteenth month in the year to come, this is done by means of a second Adar—a clear borrowing from the Babylonian second Adaru.

Only in the post-talmudic period did Judaism adopt the nineteen-year cycle, and with it a permanently stable calendar. This was the work of the Babylonian geonim, deans of the great religious academies whose halakhic sway extended over most of the Jewish world. They may have been influenced by largely forgotten Babylonian knowledge (by geonic times, Babylonians—the people we today call Iraqis—were living by the Muslim calendar), or they may have hit on it independently; one way or another, since Jews were now the only people in Europe and the Middle East living by the Metonic cycle, the belief spread among them that it represented ancient lore known only to Judaism. Thus, Yehudah Halevi, in his 12th-century defense of Judaism The Kuzari, wrote:

Among the most amazing items of knowledge possessed by [the Jewish] people is the “impregnation”[of the year] . . . that has come down to us from the time of King David and has not changed for millennia, so that whereas others have have had to keep readjusting their calendars, ours, being rooted in prophecy, remains forever true.

A Jewish year in which intercalation does not take place is known in Hebrew as a shanah p’shutah or simple year. For most of the nineteen-year cycle, pregnant years occur every third year with two simple years between them. Twice in the cycle, however, there is only one simple year between them. When this happens, as it did with 5774 and 5776, the slippage of the lunar year is overcompensated for, with the result that the solar dates of the Jewish holidays in the next simple year are unusually late. And that is the case with 5777, a simple year that has taken its time to get here.

How Jewish Leap Years Came to Be Calculated