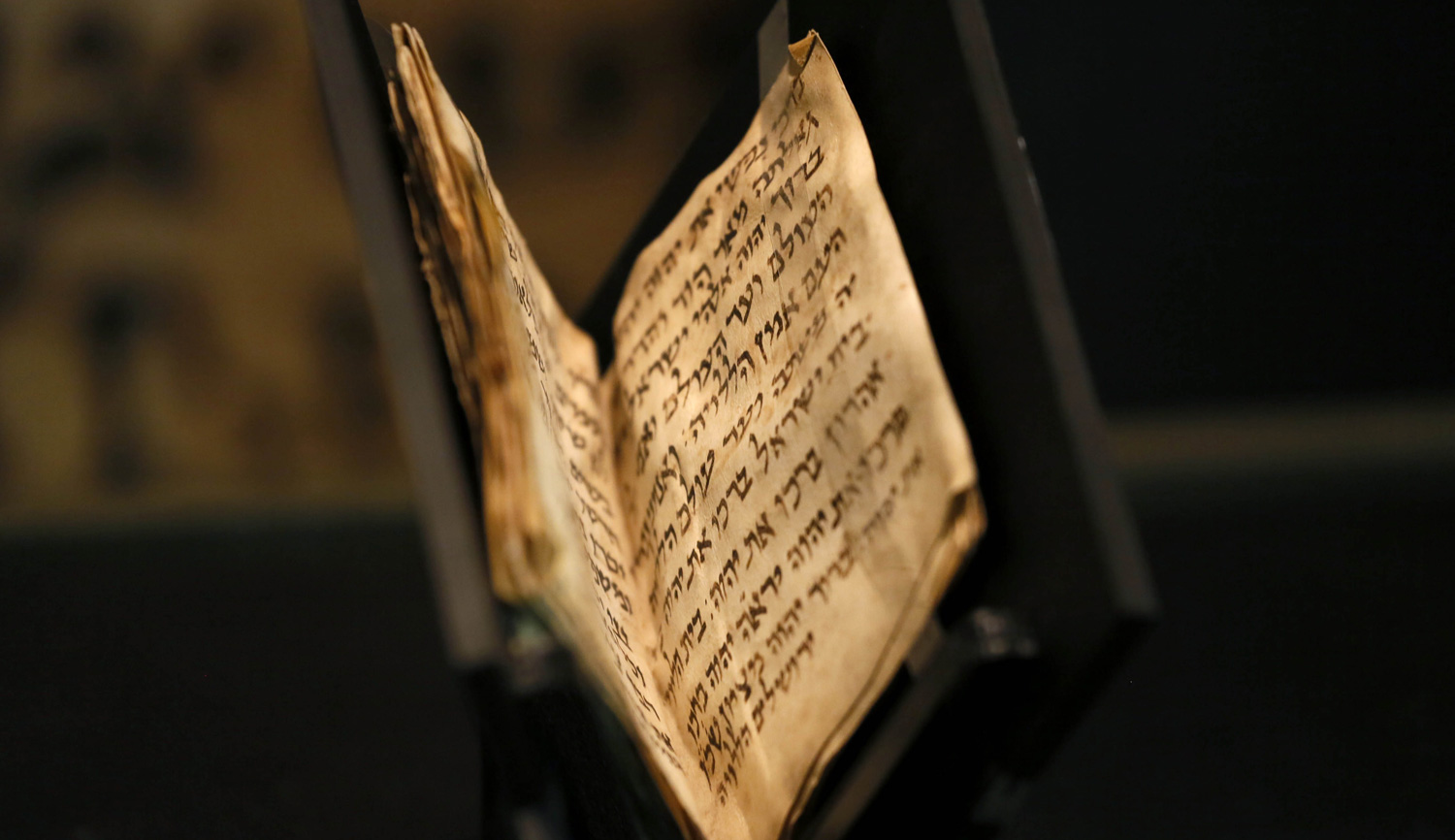 A 1,200-year-old siddur, the oldest known copy in existence, is displayed at the Bible Lands Museum in Jerusalem. GALI TIBBON/AFP/Getty Images.

The casual reader of the siddur, the Jewish prayer book, does not exist—it’s not a book you’re likely to pick up at the airport, read halfway through, and then abandon because you’ve lost interest in the plot or sympathy with the leading character. Even if you wander into a strange synagogue for a bar mitzvah, your relationship to the siddur that comes to your hand is intensely practical and intimate as you find your way through it to the passage the people around you are reciting. It is a book with a public face and a private face, a sort of literary equivalent to Dr. Who’s Tardis, the time machine that looks small from the outside but contains infinite space within.

But at least the casual reader who doesn’t exist can reasonably expect the siddur to be a stable entity: aside from minor concessions to denominational variations, editorial caprice, or ideological bent, the siddur seems a done deal, a fixed canon, a slice of daily bread whose nutritional content is beyond debate and wholly constant—the one part of the religion you can regularly lay your hands on and breathe from.

Or is it? As I started investigating particular prayers and how they came to be included in the siddur, I was struck by the extent to which this supposedly canonical work is actually a battleground, marked with the imprints of wave upon wave of Jewish sects, movements, and constituencies, some of which have long since faded away. The ancient priesthood, the Pharisees, the kabbalists, the Ḥasidim—each has made a stand in those pages for what it thinks Judaism should be, often in the face of what Judaism had been until that point; in the process, the contribution of each has been partly absorbed and partly neutralized.

Take the service known as Kabbalat Shabbat (“welcoming the Sabbath”), today a standard feature at nearly any synagogue, of any denomination, you might walk into. This brief assortment of psalms and occasional hymns is recited or sung at dusk on Fridays, in the interval between the afternoon prayer of minḥah and the evening prayer of maariv. The service reaches its climax with L’khah dodi (“Let us go, my sweet”), a poem that has been set to innumerable melodies over the years. Surely Moses must have hummed one of them on that first Sabbath eve in the desert, no?

Apparently not. The Talmud does tell us that on Sabbath eve Rabbi Ḥaninah used to stand up, wrap himself, and say: “Come let us go out toward the Sabbath queen.” Rabbi Yannai, for his part, would put on his best clothes and say: “Come, bride. Come, bride” (Tractate Shabbat). But any such prayer is absent from medieval liturgies.

The more immediate origins of the Sabbath-eve service as a whole lie in the 16th century. At that time the Galilean town of Safed had attracted many if not most of the leading Jewish mystics of the day, many of whom were exiles from Spain or their descendants. The kabbalists of Safed, taking the ritual literally, would go out of the city to welcome the Sabbath and there in the heart of nature sing a number of the prayers still preserved in the Kabbalat Shabbat liturgy.

Also in circulation at the time were several different versions of a song called L’khah dodi, until one by Rabbi Shlomo Alkebetz won the endorsement of the group’s preeminent member, Isaac Luria (1534-1572). From there it spread to other congregations—although not without objections, to which we shall return.

The ceremony of Kabbalat Shabbat was not the only innovation developed by the Lurianic mystics, adopted by fellow kabbalists from Persia to Lorraine, and then, to one degree or another, absorbed into general custom. But it is one of the very few to gain near-universal acceptance. Although elements of it may vary from place to place, all variants contain L’khah dodi and conclude with the congregation and prayer leader turning to face the entrance of the synagogue, in memory of those kabbalists who went out from the city and into the fields to welcome the Sabbath Queen.

Keep and remember, in one command,
This we heard from our only Lord.
The Lord is one and His name is one—
To name and to extol and to adore.

And here come the objections. I don’t know about you, but so far I’ve found nothing in the poem to outrage my sense of decency. In 17th-century Frankfurt, however, they saw things differently. Sefer Yosif Omets reports: “It’s not my custom to say in Kabbalat Shabbat the first couplet of L’khah dodi, because it is not our custom to go out from place to place to greet the Sabbath as is the custom in the land of Israel; there at the least they go out to the synagogue courtyard.” Still today, across the centuries, you can hear the sniff of disapproval.

A later book about the same community by Shlomo Zalman Geiger, Divrei K’hillot, paints a picture of intracommunal division over the issue. In Frankfurt there were two synagogues, located side by side and (as was often the case) sharing a courtyard. At one, the Kabbalat Shabbat service would be recited, but the cantor would not wear a prayer shawl as he would if leading a regular service. Nor would he stand at the lectern at the front but rather on the elevated platform in the middle of the sanctuary, usually reserved for the Torah reading, “in order to indicate that this was not an essential prayer.” Once the singing of L’khah dodi concluded, the beadle would go out to the courtyard and knock on the doors of both synagogues, “to let everyone know that it was now time to welcome the Sabbath.”

In other words, some Frankfurt Jews would recite the psalms and hymns of Kabbalat Shabbat but only in a mode that tacitly acknowledged their exceptional status, outside the regular order of the liturgy. Others would not participate at all but wait for the first group to finish before starting the evening service proper. The historical reasons for this have to do with Frankfurt’s own unique history, with its general resistance to liturgical change, and with an eventual anti-kabbalist backlash there.

But why, once you’ve accepted Kabbalat Shabbat in one form or another, put your foot down at the “Let us go” of L’khah dodi, as does the author of Yosif Omets? As implied, his objection relates to the idea of leaving the synagogue in emulation of the mystics of Safed, but might the real objection lie elsewhere—perhaps in some fear of being seen and mocked by non-Jews while thus traipsing about? To me, at any rate, what’s interesting is the way in which almost all customs around L’khah dodi do try, however partially or obliquely, to preserve that physical sense of the journey out of Safed to welcome the night, to welcome the Sabbath coming over the horizon as you can do in a hilly place where what you see from one spot is not the same as what you see from another.

But perhaps there’s also a lingering deep reservation about those wild kabbalists and their antics. I once prayed with a community of dyed-in-the-wool Litvaks in North Manchester—British Jews of Lithuanian origin who preserved the cerebral, unemotional, and anti-ḥasidic traditions of their ancestors. They rushed impassively through the stanzas of L’khah dodi, but between each stanza they hummed an elongated tune luxuriant with longing.

So, in the end, L’khah dodi may function for each community as a vehicle through which to give voice to its own individuality at this in-between, holding-your-breath moment of the week—just as L’khah dodi itself slips in between the business-like weekday prayers and the more relaxed Sabbath liturgy. Is it any wonder that, to some, its naked yearning needs to be kept in check?

To greet the Sabbath—come, let us go on.
She is the spring of the blessings, each one.
From before all time, the anointed one,
The story’s end foreseen just as begun.

Royal Temple, royal capital,
Rise and emerge from all this reversal.
Too long you’ve sat in the vale of toil.
In grace He’ll grant you His acquittal.

Bestir yourself, from the dust arise
Put on your glad clothes of glory, my tribe,
By the hand of Jesse’s son, the Bethlehemite,
Deliverance approaches for my life.

I live on the brow of a hill, and usually sing the Kabbalat Shabbat service in my front room. My son, however, likes to go out into the dark and look at the last light fading over the horizon and night coming in over the fields, holding Sabbath in the folds of its cloak. They’re not the fields of Safed, but he’s doing more than merely mouthing the words of the old tune. So long as it isn’t raining, I don’t discourage him, and at the end of the song I, too, turn around and face out, as they have done since Safed.

Wake yourself up, rise upright
For your light is come; rise with the light!
Awake, awake, sing in rhyme,
The glory of the Lord upon you shines.

You shall not be humbled; you shall not be cast down.
Why are you downcast? Why do you groan?
In you will find shelter all the poor of my kin
And the city be built up on its ruin.

And all your looters in turn be looted,
Far away all who devoured your pride!
Your Lord will revel by your side
As a bridegroom revels by his bride.

East and West you shall burst forth
And the Lord you shall enthrone.
Saved at the hand of one of Peretz born
We’ll rejoice and let out song.

Come in peace, crown of her husband,
Both in joy and in delight,
Into the faithful ones of the people chosen,
Come, bride. Come, bride.