Who or what was Azazel? 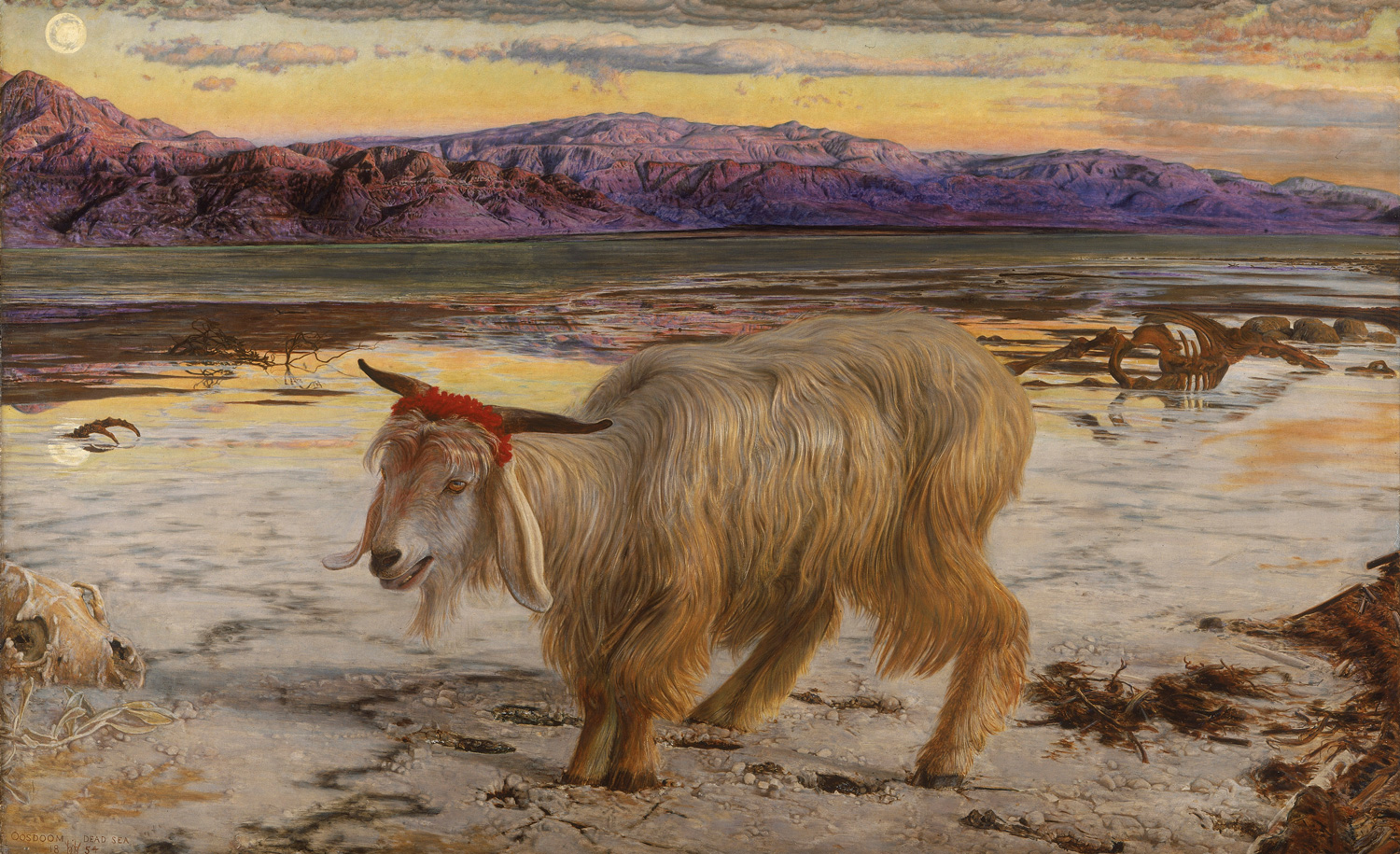 From The Scapegoat, 1854, by William Holman Hunt. Wikipedia.

A key moment in the dramatic rites of the Day of Atonement in the ancient Temple was the expulsion into the wilderness of the scapegoat—the sa’ir l’azazel or “goat for Azazel,” as Leviticus 16 calls it—to “bear upon him all [the] iniquities” of the people of Israel. The Bible itself says nothing about what then happened to this goat, whose double was sacrificed upon the altar as a sin-offering. Yet in Tractate Yoma, the Mishnah (dating to the late 2nd century CE) makes its fate clear, at least as enacted in late-Second Temple times. Driven into the badlands between Jerusalem and the Dead Sea, it was pushed off an escarpment while tied to a heavy rock and tumbled helplessly to its death.

Such was the practice. But who or what was Azazel or azazel? This mysterious word occurs nowhere else in the Hebrew Bible. Is it a descriptive term? The name of a place? Of a supernatural being? Each of these alternatives has had its backers. Bible translations have disagreed about them. So have Jewish tradition and the commentaries of the rabbis.

The English word “scapegoat” (“scape” being an abbreviation of “escape”) has ancient, pre-English roots. These go back to two early Bible translations, the 2nd-century-BCE Greek Septuagint and the 4th-century-CE Latin Vulgate, both of which interpreted azazel as a word composed of ez, goat, and azal, to diminish, depart, or vanish. In the Latin Bible this is rendered as capro emissario, “the goat [that is] sent away,” and the 17th-century King James Version’s “scapegoat” is in turn a translation of the Latin. However, this is a dubious reading, in part because ez in the Bible denotes a female goat and should be accompanied by the verbal form azelah, not azel. A he-goat is a sa’ir, the word used by Leviticus, which is clearly talking about a male animal.

This was recognized by the early rabbis, who declined on grammatical grounds to adopt such an interpretation even though it was a tempting one, since what they did not want to accept was the possibility that Azazel might be a supernatural being of some kind. As stated in a passage in the Gemara (dating to somewhere between the 4th and 6th centuries), they preferred the explanation that the word was a compound of az, “fierce,” and el in its rare but attested-to sense of “strength”—that is, a harsh or wild place. Yet this etymology, too, is a forced one, as is acknowledged in the same passage by Rabbi Yishma’el, who offers a speculation of his own: namely, that the scapegoat meets its death in a place called Azazel “because this atones for the deeds of Uza and Aza’el.”

Who were Uza and Aza’el? If we were to rely on other rabbinic sources, we would know nothing about Uza, while Aza’el would be familiar to us only from a medieval compilation of exegetical lore called Midrash Avkir. There, in commenting on the verse in Genesis that relates how, before the Flood, “The sons of God saw the daughters of men that they were fair, and they took them wives of all which they chose,” Midrash Avkir relates that two of these “sons of God” were named Shamḥazai and Aza’el. Both sinned in lusting for mortal women, but whereas Shamḥazai repented, “Aza’el did not and still continues in his debased ways.”

From where did the anonymous author of Midrash Avkir get this story? Whether directly or through mediating sources, it came to him from the apocryphal book of Enoch I, a visionary Jewish text, probably written in the 1st century CE, that lists Aza’el or (as Enoch calls him) Azazel among the leaders of the fallen angels who descended from heaven to take human wives. In punishment, Enoch I tells us, “The Lord said to [the archangel] Raphael, ‘Bind Azazel hand in foot and throw him into the darkness!’ And [Raphael] made a hole in the desert . . . and cast him there and threw on top of him sharp, rugged rocks.”

It was to this story in Enoch I, or some version of it, that Rabbi Yishma’el was obviously referring—and just as obviously, the story itself alludes to the scapegoat of Leviticus and the “sharp, rugged rocks” it was cast from. Yet why would pushing a goat to its death atone for Azazel’s sin, and why was this a sin that the people of Israel, who had nothing to do with it, were called upon to atone for? Rabbi Yishma’el’s explanation, too, is far from satisfactory, a fact remarked on by the 12th-century biblical exegete Abraham ibn Ezra when he wrote, while commenting on Leviticus 16, that the scapegoat could not have been a sacrifice of atonement because it was not slaughtered as a sacrificed animal must be. “If you understood the secret that follows the word Azazel, you would understand it and its secret, too,” ibn Ezra wrote cryptically. “Here, I will only give you a hint: when you turn thirty-three, you will know it [all].”

As pointed out by the Bible scholar Aron Pinker in an article on Azazel in the Journal of Hebrew Scriptures, ibn Ezra was posing a clever riddle. To solve it, one has to count 33 verses from Leviticus 16:8, where Azazel is first mentioned, to arrive at Leviticus 17:7, which reads: “And they shall no more offer their sacrifices unto devils, after whom they have gone whoring.” The Hebrew word more or less correctly translated by the King James Version as “devils” is se’irim—which also, as we have seen, means he-goats. (The word derives from se’ar, “hair,” and can have the additional sense of hairy or shaggy.) What ibn Ezra, rather shockingly (hence his cryptic manner), appears to be saying is that the scapegoat was an offering not to God but to a devil named Azazel.

Moses Naḥmanides, who lived a century after ibn Ezra, tried to put this surmise in a theologically acceptable light. Azazel, he wrote, was another name for Samael, the chief of the demons, and the scapegoat was a bribe to ensure that he behaved himself on the Day of Atonement and refrained from sabotaging Israel’s prayers and acts of contrition. Although the Torah, Naḥmanides observed, strictly forbade worshiping any being beside God, God could, if He wished, order men to placate potentially harmful powers. On the Day of Atonement, “He orders us to send a he-goat to the spirit of ruin and destruction. . . . The intention is not, God forbid, to offer a sacrifice to this spirit, but to obey the will of our Creator.”

In this, it must be said, Naḥmanides’ conclusions are surprisingly close to those of modern scholars, most of whom, though disputing the details, agree that Azazel or Aza’el was an ancient Semitic deity demoted by the monotheistic Israelite religion to the status of a demon or evil spirit whose abode was the wilderness. His name is thus to be understood as a combination of az or aziz, “fierce,” “strong,” or “powerful,” and el, “god,” a common ending in Hebrew names, especially those of angels (think of Raphael, Gabriel, etc.) , while the story about him in Enoch I is a distant echo of his demotion.

Is Azazel to be identified with Mot, the Canaanite ruler of the underworld (compare the biblical name Azmavet), with the Assyrian god Abdiazuzi, or with the Phoenician deity Bel-Aziz? Was he originally a goat-deity like the Greek god Pan? Was his existence still believed in at the time Leviticus was written, or was he by then but a personified representation of evil that was understood to be no more than symbolic? Was he perhaps even a doppelganger of the Israelite God himself, an older, anarchic, desert-dwelling version of the law-giving God of Sinai who later came to dwell in the Temple in Jerusalem?

About these and other things, the scholars continue to argue. Yet in doing so they are merely elaborating on ibn Ezra’s and Naḥmanides’ bold insight that Azazel was not a word or a place but a demonic figure whom the ritual of the scapegoat was designed to appease.