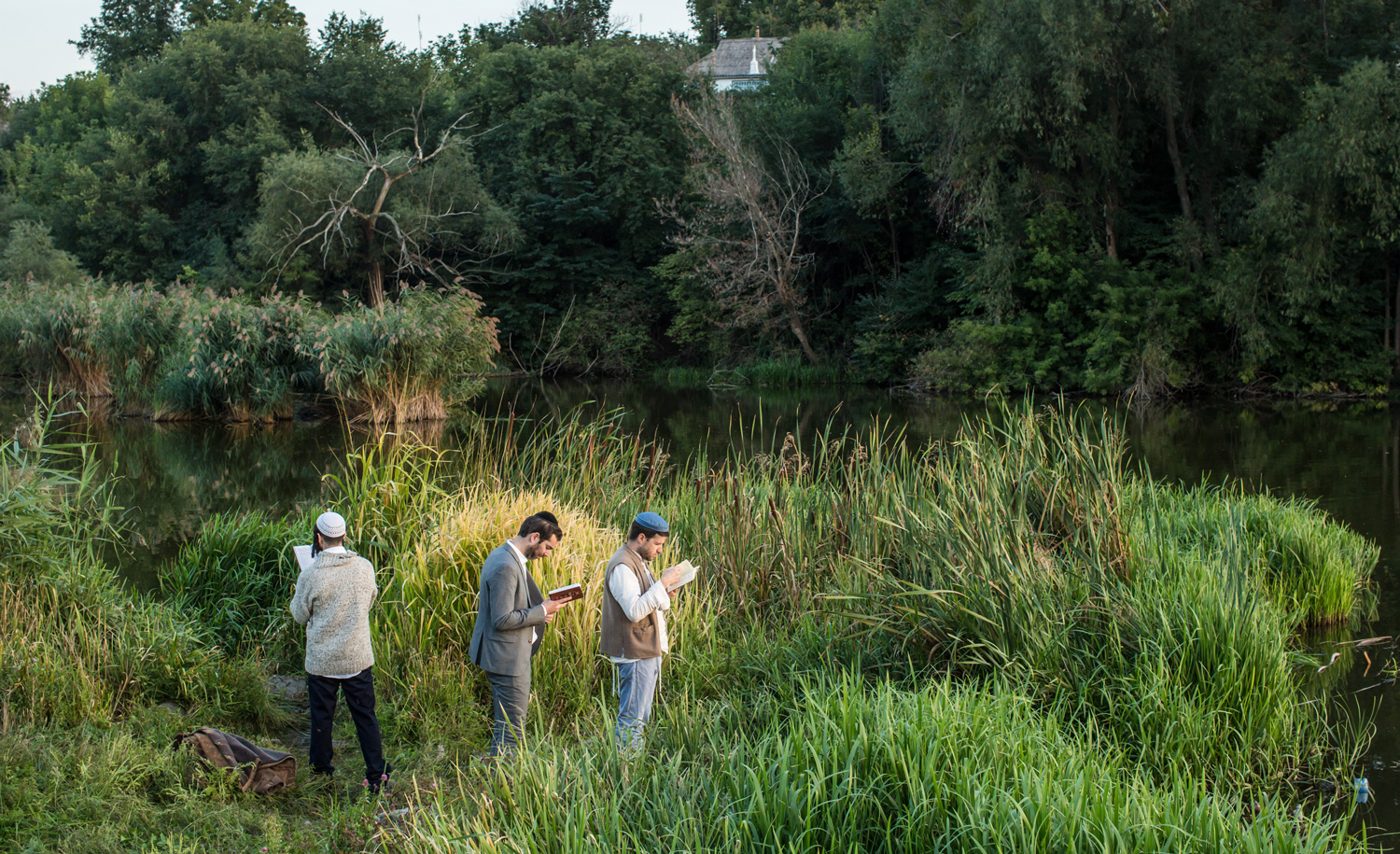 Hasidic pilgrims pray along a river near the burial site of Rabbi Nachman of Breslov in Uman, Ukraine. Brendan Hoffman/Getty Images.

One of the most spectacular songs of praise in the Jewish liturgy is the prayer known as Nishmat (“Soul of”), after the first word of its opening line: “The soul of all that lives shall bless Your name.” (My attempt at a translation of the poem appears at the end of this essay.) Reserved for Sabbaths and major holidays, it culminates the series of psalms and praises of God with which the morning service begins, and concludes with a blessing that marks the transition to the next part of the service. Interestingly, it also makes an appearance at a parallel juncture in the Passover seder.

The major disagreement concerning this poetic gem regards the identity of its author. Throughout the Middle Ages it was commonly (and startlingly) attributed to Rabbi Shimon Keyfah, also known as Simon the Rock—as in, “this is the rock [in Greek, petra] on which you shall build my church”—also known as the apostle Peter. Seder Avodat Yisrael, a 19th-century critical edition of the prayer book, cites a handwritten manuscript from 1406 CE that reports two different attributions, one to Shimon Keyfah and the other to Shimon ben Shetakh (120-40 BCE), a leading Pharisee of his day.

This dual attribution is rather like ascribing Walt Whitman’s “Song of Myself” to both Abraham Lincoln and Stephen Douglas; not only do the two Shimons come from radically different ends of the ideological spectrum, but neither was noted for his lyrical contributions. At any rate, Rashi’s student Simḥah ben Samuel of Vitry (d. 1105), in his compendium of prayers, responsa, and customs, sharply protested this rumor:

The attribution to Peter was possible because, as with many ancient prayers, there’s no hard evidence as to who really wrote it. But the theory makes a certain sense in the context of other legends about “Shimon Keyfah,” who seems to be a conflation of the apostle Peter, the apostle Paul, and the 5th-century Syrian saint Simeon Stylites. The 1915 collection Otsar Midrashim (“Midrashic Treasury”) by Julius Eisenstein includes no fewer than three variant tales of Shimon Keyfah’s attempt to save Judaism by creating Christianity as a distinct religion. According to these stories, Shimon was a sort of rabbinic mole in the early Church who prevented a schism within Judaism by convincing Jesus’ followers to see themselves not as a Jewish sect but as a new faith with a mission to evangelize pagans. He also convinced his new coreligionists to deal kindly with Jews, observe Easter rather than Passover to emphasize their religion’s distinctiveness, and so forth.

One of the stories concludes with the fairy-tale ending that Peter composed many liturgical poems to attain the forgiveness of the Almighty for outwardly practicing Christianity and lived out his days in a tower that stands to this day in Rome. Which goes to suggest that attributing the prayer to Shimon Keyfah had little to do with evaluations of him as an individual but was instead a kind of Jewish just-so story that managed simultaneously to belittle Christianity and find a way to accept its domination.

Of course, if we think of the story this way, we’re still left to wonder: why Nishmat, and not another liturgical poem? I’ll come back to that question, but let’s first look at other disagreements surrounding Nishmat.

In Tractate P’saḥim, the Talmud instructs that the series of psalms (collectively known as Hallel) recited at the very end of the Passover seder should be followed by something called “the blessing of song.” Rabbi Yehudah asserts that this is the same blessing that would follow Hallel in the holiday synagogue service, but Rabbi Yoḥanan says that it is in fact Nishmat. Later authorities resolved the dispute by simply requiring that the two prayers be recited sequentially.

But a parallel disagreement between Yehudah and Yoḥanan crops up in Tractate B’rakhot, where the two debate the proper blessing over the first heavy rainfall of the year. Rabbi Yehudah again gives a predictable answer: “We thank You for each and every drop that You brought down for us.” But Rabbi Yoḥanan holds that one should say, in a segment from Nishmat: “Were our mouths as full of song as the sea . . . we still would not be able to requite You, Lord our God.” This has led some scholars to conclude that the prayer originated as a way to thank God for rainfall, later inserted into the regular liturgy and duly expanded.

Be that as it may, Yoḥanan clearly wants to use Nishmat as much as possible—bringing it into the seder and the thanksgiving prayer for rain—while Yehudah seems to want to keep it in its one particular place.

Another theory about the origin and meaning of Nishmat can be found in a commentary to the M’khilta (an ancient rabbinic commentary on Exodus) by Rabbi Nissim of Gerona (1320-1376) and may be taken as a less polemically-charged expression of the same impulse that sought to ascribe its authorship to Peter:

Not only Jews uttered songs but also the nations of the world. Because it was heard, they all denied their idol worship and said, “Who is like You?” . . . And even in this very poem it is written at the beginning, “The soul of every living thing and spirit of all flesh” and so it’s written after that intention: “God of all creations, Master of all generations.”

This poem, in short, which Jews recite toward the end of the first section of the morning service on Sabbath and holidays and after the meal on Passover, bursts all boundaries in its aspirations and its repercussions. Its language soars with the boldest aspiration to assess and celebrate the Lord’s due. Starting with the wide-open sky and the wings of eagles, it ends deep inside the recesses of the body, in the very vital organs of what Shakespeare’s King Lear calls “the poor, bare, forked animal.” All of this sings the Lord’s praise, and it is what accounts for the impulse to share this poem with all mankind, perhaps most especially with the poor man and the sufferer whom it places momentarily within reach of an exchange with the divine, on earth as in the windy heavens.

The soul of all that lives shall bless
Your name, Lord our God,
And spirit of all flesh shall glorify and raise on high Your mark,
Our King. Always, since before all time and for all time
You are God
And without You we have no King to redeem and rescue,
Ransom and reprieve, succor and take pity
In all times of trouble and catastrophe.
We have no King apart from you,
God of the first and of the last,
God of all creations,
Master of all generations,
Extolled in myriad songs of praise,
Who conducts His universe with kindness,
And His creations with compassion;
The Lord will not sleep or slumber.
The stirrer of sleepers and waker of those who nod,
Who moves the dumb to speak and prisoners to be freed,
Who supports the stumbler and straightens the stooped—
To You alone we give gratitude.
Were our mouths as full of song as the sea,
Our tongues of prayer like the welter of its waves,
Our lips full of praise as the spread of the sky
And our eyes lit like the sun and moon,
Our hands outstretched like the hawks of heaven
And our feet as nimble as does,
We still would not be able to requite You
Lord our God and God of our fathers
And to bless Your name
For one of the thousands of thousands of thousands
And hundreds of millions of good turns
You’ve done our forefathers and us.
Out of Egypt You rescued us, Lord our God,
From the house of slavery redeemed us.
In hunger You fed us, in fullness sustained us, from the sword delivered us,
From pestilence You prised us; from vile and constant ills You raised us.
Thus far have Your mercies helped us and Your gifts not let us down,
But don’t abandon us, Lord our God, for all time.
That’s why the limbs You distinguished in us, and spirit and soul You blew into our nose
And tongues You placed into our mouths,
Those very things will thank and bless and praise,
Extol, exalt, admire, sanctify, and crown Your name,
Our King.
For every mouth to You gives thanks,
Every tongue to You shall swear,
And every knee to You be bent,
Every body to You bow
And all hearts shall fear You
And every gut and kidney sing to Your great name
As the word that is written, all my bones shall say:
Lord who is like Thee,
Who saves the pauper from the mighty,
And the pauper and beggar from the thief?
Who resembles You and who compares to You
And who measures up to You?
The great God,
The mighty and terrible,
God above, framer of heaven and earth.
We’ll carol You and praise You, glorify and bless Your holy name
As was said by David, “Let my soul praise
The Lord and all my insides His holy name.”