The great song marking the Israelites’ safe crossing of the Sea of Reeds is the Hebrew Bible’s only full-length poem recited collectively by the people as a whole. What is it really about? 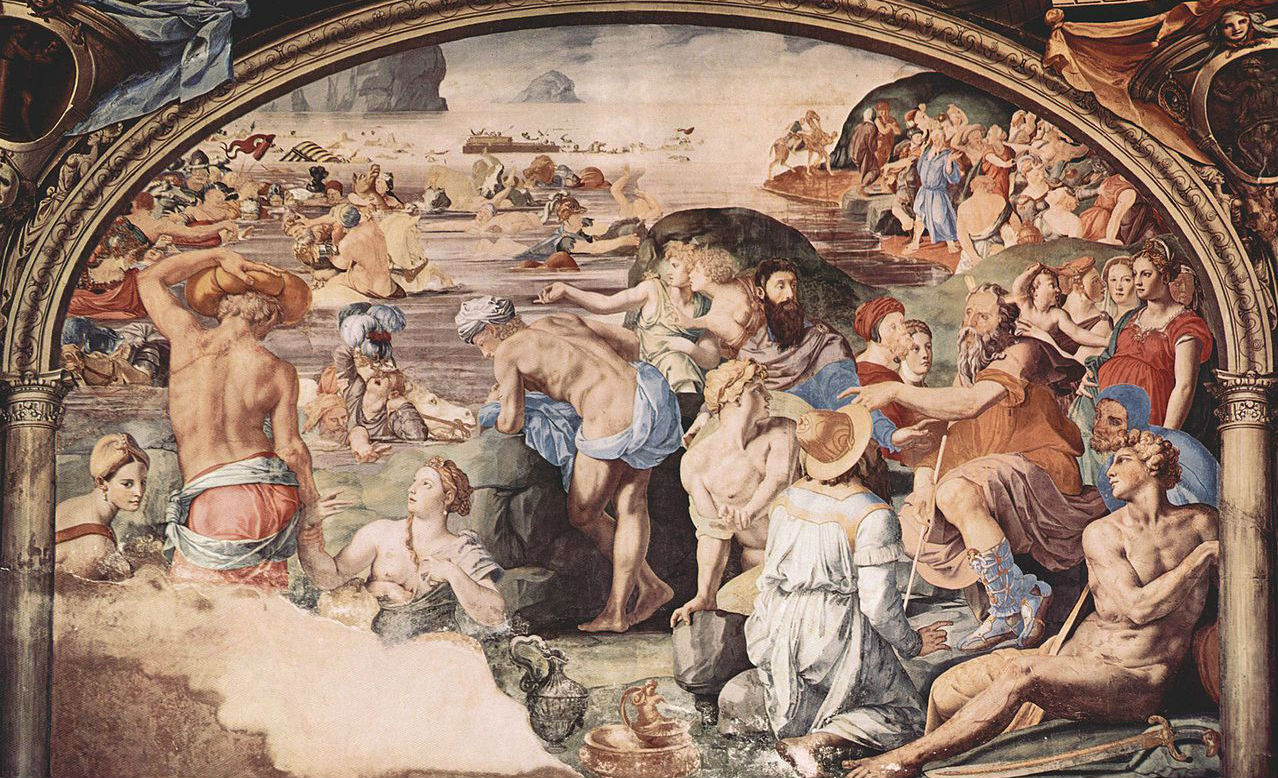 From Crossing of the Red Sea by Bronzino, 1542. Wikimedia.

A climactic moment in the Exodus narrative comes in this week’s Torah reading of B’shalaḥ (Exodus 13:17-17:16). Just after God finally and definitively saves the Israelites from their Egyptian oppressors at the Sea of Reeds, Moses leads the people in a song of thanksgiving. This is the first of two or three such poems in the Pentateuch; indeed, in the narrative portion of the Hebrew Bible that extends from Genesis through the second book of Kings, it is one of only a handful of passages where the authors abandon prose. Like the other instances, the Song at the Sea presents an alternate version of a story that has already been relayed in prose. In doing so, it raises new perspectives, both literary and religious, that the biblical text as a whole might otherwise lack.

To put the song in context: Moses and the Israelites have finally been expelled from slavery in Egypt amid miracles and wonders. Pharaoh, however, has a change of heart and sends his troops and chariots after the now-terrified Jews. In a magnificent display of His power, God parts the Sea of Reeds so that the Israelites may pass through on dry land. The Egyptian troops, in their futile attempt at pursuit, are subsequently drowned in the waters of the sea.

This seems, then, a natural place to burst into song—until one asks why exactly the Israelites sing here and here only. No other full-length biblical poem is recited collectively by the nation as a whole. Why don’t the people sing as they depart from Egypt? Or while sacrificing the paschal lamb, or at the theophany at Sinai? And what is the perspective that the content of the Song introduces? By seeking an answer to this last question, I think we can come to answer the others.

Let’s look at the Song itself, keeping in mind that in biblical Hebrew, as in other ancient languages, the terms for “poem” and “song” are the same:

Then Moses and the children of Israel sang this song to the Lord, and they said:
Let us sing to the Lord, for he has triumphed;
Horse and driver He has hurled into the sea.
The Lord is my strength and my might,
He is become my deliverance.

The word rendered here (and in most translations) as “might” derives from the Hebrew root z-m-r, which usually refers to music, and thus should perhaps itself be translated as “song,” or “praise,” as the ancient Aramaic translation of Onkelos has it. Not only are the Israelites extolling God through the medium of song, they are incorporating song into their very conception of Him and of their relationship with the Divine. Indeed, the song continues in this vein:

The focus thus remains on what the exodus from Egypt is really about: God. And this emphasis on God as object of praise and worship, as opposed to God as savior from bodily suffering and servitude, marks a significant shift within the book of Exodus. With but a few brief exceptions (e.g., the commandment to sacrifice the paschal lamb), the book’s first fourteen chapters present the political and physical liberation of the Israelites as the primary goal, with the people learning to appreciate God’s role in bringing it about. The Song at the Sea, by contrast, makes God Himself the ultimate goal toward which Israel is moving. It is at this point that the Torah turns from a story of “freedom from” to a story of “freedom for.”

In Your love [ḥesed] You lead the people you redeemed
In Your strength You guide them to Your holy abode.

The first stich still speaks of redemption, but now the people are being led in a particular direction; the second tells us to where: God’s “holy abode,” most likely referring either to the tabernacle—the construction of which consumes thirteen of Exodus’ 25 remaining chapters—or to the Temple to be built in Jerusalem. These are places where the people Israel are to serve and glorify God: the ultimate purpose of their redemption.

The subsequent verses are likewise future-oriented, describing the fear that now grips the Philistines, Moabites, Edomites, and Canaanites whom Israel will confront in the years and centuries to come, thus calling our attention to the journey toward, and settlement of, the Promised Land. (There is also a stark contrast here to the Israelites’ former fears of the Egyptians, which predominate in the previous chapter.) The song concludes:

You will bring them and plant them in Your own mountain,
The place You made, to dwell in, O Lord,
The sanctuary, O Lord, which Your hands established.
The Lord will reign for ever and ever!

By the end of the poem, which collapses time and history, the miraculous events at the sea are but a distant memory and we are firmly ensconced in the mountain of God (presumably the Temple Mount) and His worship in the tabernacle/Temple. While the dramatic events of the Exodus 14 story are located in a specific historical moment, the poetry of Exodus 15 takes these events out of history and affixes them to a set of enduring religious ideas.

In truth, the Song at the Sea offers but an optimistic interlude before many more years of wandering and confusion for the Israelites. Those years are the main subject of the following three books of the Pentateuch, which are narrated almost exclusively in prose. Even once planted in the land of Israel, the Jewish people will struggle with some of the challenges of faith and cohesion they faced during their desert travels, not to mention the new challenges that will arise in the context of national sovereignty. Deliberately ignoring all of this—what we might call prosaic reality—the Song transforms it in a poetic statement of the triumphant ideal.

I find it appropriate here to note another way in which the Song at the Sea both builds on and transforms the events described earlier in prose: it imbues the Israelites’ salvation from the Egyptian military with a decidedly feminine dimension. Both traditional and modern commentators have noted the strong feminine and birth imagery already present at the beginning of the book of Exodus: from the abundant fecundity of the Israelites in Egypt, to the heroic action of two Hebrew midwives in saving condemned Israelite male infants, to, in the case of the baby Moses, the salvific interventions of his mother, his sister Miriam, and Pharaoh’s own daughter.

Some scholars have tied this nurturing theme to the book’s larger theme: the birth of a nation. In this reading, the splitting of the Sea of Reeds creates a kind of birth canal, through which the nation enters the world as it emerges onto dry land. Similarly, the Song at the Sea depicts not only the victory of one party over another but also the coming-into-being of something entirely new.

This reading may also help explain the curious addendum to the Song in which the prophetess Miriam leads the dancing Israelite women in what appears to be another rendition of the same song we have just heard. As the medieval exegete Rashi suggests in his commentary to 15:3, the Song as a whole reminds us that God is both a “warrior” who strikes the Egyptians and a source of mercy (raḥamim) who tenderly guides His people in safety to the promised land. Poetry, and not prose, has the capacity to unite male and female, punishment and redemption, and indeed the two halves of the book Exodus into one glorious moment of harmony.

By marking not just liberation from Egyptian bondage but Israel’s birth as a nation, by celebrating not merely freedom but Israel’s national purpose of serving God, and by looking forward to a future in the promised land, the Song can be seen as a kind of national anthem, one that continues to offer a taste of the animating ideal of the Jewish people. This ideal is nurtured by the contributions of all citizens, both male and female. It mingles strength and song, power and loving-kindness. It leverages a strong foundation and a sense of rootedness in time and place in order to develop the people’s moral and spiritual potential. And from the very outset this national identity has something about it that is by nature poetic.

In the preface to his grand American poem Leaves of Grass, Walt Whitman famously asserts that “the United States themselves are essentially the greatest poem.” For Whitman, there is something profoundly lyrical and transcendent about the American national character. Poetry thus becomes his means of conveying what would ostensibly be difficult or even impossible to capture in prose. More than 2,000 years before Whitman, a similar claim was made on the banks of the Sea of Reeds, as a mass of newly freed slaves took their first steps toward nationhood and burst rhapsodically into song.