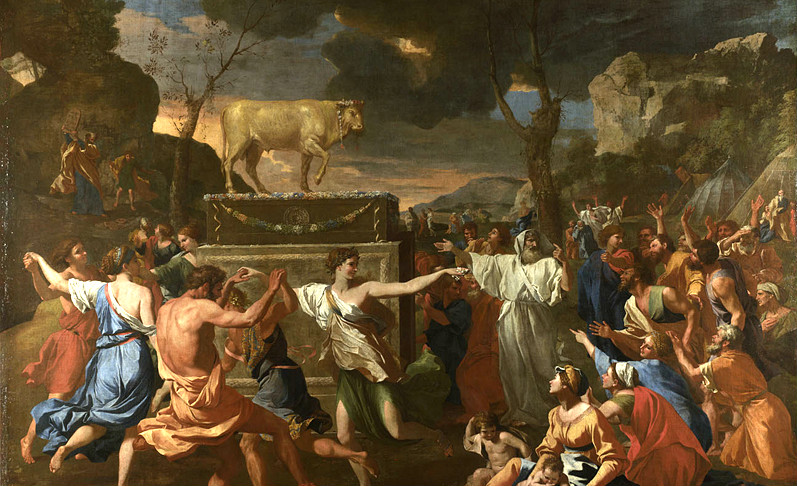 From The Adoration of the Golden Calf by Nicolas Poussin, 1633. National Gallery.

This week’s Torah reading of Ki Tissa (Exodus 30:11-34:35) is built around the story of the sin of the Golden Calf, which represents either the heart of darkness or an inspirational example of childrearing through trial and error. I once compared the relationship between the Almighty and Moses with that of a comedy team in which Moses plays the straight man. Here, however, they seem not so much a comic duo as a married couple who, when they have to discuss something in considerable depth, leave the children in the care of Uncle Aaron.

But let’s start at the beginning. The parashah, which takes place not long after the revelation at Sinai, starts with a census-cum-poll tax to fund the service of the meeting tent, the proto-Temple whose construction has been described in the previous chapters:

The rich shall not add and the poor not detract from the half-shekel in giving the Lord’s donation
To atone for your lives. You’ll take the atonement money From the children of Israel
And put it toward the service of the meeting tent.

In other words, all adult taxpayers are equal in the Lord’s eyes—and the money they’re paying is a ransom for their souls, which are also equal. Then He instructs Moses to build a sink outside the meeting tent, which Aaron and his sons must use to wash before entering to perform their priestly service. In short, only specific individuals can go in and out of the tent, and they must purify themselves first. They’ll also have to be anointed with a special mixture of oils and herbs, as the following verses explain—so special that “a man who’ll concoct the like and put it on a foreigner shall be cut off from his people.”

After these instructions are transmitted, Moses goes back up Mount Sinai to have a chat with the Lord, and then things below get out of hand.

But the people saw that Moses dilly-dallied coming down from the mountain,
And the people crowded around Aaron
And told him, “Get up! Make us a god
That’ll go before us,
Because this one, Moses, the man who raised us from the land of Egypt,
We don’t know what became of him.”
So Aaron said to them, “Break the gold rings in the ears of your wives, sons, and daughters
And bring them to me.”

Traditional commentators have made various attempts to exonerate Aaron for his part in what is about to happen. The first exhibit for the defense is precisely this request that the insurgent idolaters go home to their wives and children and deprive them of their favorite ornaments—clearly a stalling technique, and perhaps a deterrent. Who would really want to worship an idol if it meant giving up your silver and gold?

Fair enough. But why is there no argument on Aaron’s part? Not a word. His defenders cite a midrash stating that when Hur, whom Moses left in charge of the camp alongside Aaron, tried to protest, the mob killed him, and Aaron feared for his life. But the text gives no hint of this.

In any case, the stalling is ineffective; the Israelites return with the loot right away:

And he took it from their hands and engraved it, and made it into a forged calf
And they said, “These are your gods, Israel,
That raised you from the land of Egypt.”
But Aaron was afraid and built an altar before it
And Aaron called out and said: “a feast for the Lord tomorrow.”

Whatever merit there may be in the commentators’ defenses, how can we possibly justify, or even explain, the impulse to connect the Lord and the emerging religious practice of Israel with this huge trinket? Even if you say that Aaron is basically a religious functionary—not a leader or pastor or theologian—and that he’s only trying to regularize and legitimize what they’re asking of him, why does he lend his imprimatur to this travesty, a mere few weeks after hearing the divine voice declare, “You shall have no other gods before Me”?

And why make a desecration into an official festival? Even if you excuse him (as some commentators do) by pointing out that he scheduled this festival for the next day, and for the Lord, in the hope that Moses would arrive in time to put an end to the idolatry, he was, alas, mistaken:

They rose early next day and raised sacrifices and brought feast-offerings.
And the people sat down to eat and drink
And got up to fool around.

Aaron’s intent aside, the result was to institutionalize the calf-worship. The people, now given a tangible, old-fashioned idol to bow down to, proceed to treat it as they did the Lord Himself during their previous encounter with Him at Sinai (Exodus 24:4-11): they bring sacrifices, eat the meat, and wash it down with wine. But this time, as a consequence of Aaron’s authorization and the absence of Moses’ forceful moral guidance, they proceed to act with the license provided by such unbridled eating and drinking.

But the Lord spoke to Moses, “Go! Get down!
For your people that you raised from the land of Egypt messed up.”

This is where we most clearly see God and Moses acting like parents. It’s one of those moments where Dad tells Mom, in tones bound to provoke a quarrel, “Your daughter came back from school today with a nose ring.” It’s also the clear sound of a distinctly irked Lord who has heard every word the people were saying down below about how “this Moses”—and not He—had done the hard work of taking them out of Egypt.

And the Lord said to Moses, “I’ve looked over this people
And look, it’s a people whose necks won’t bow.
But now let Me be and I’ll vent My anger on them and destroy them
And make you into a great nation.”

But Moses is having none of it:

But Moses started before the Lord his God
And said, “Why, Lord, shall You vent Your anger at Your people
Whom You brought out of the land of Egypt
With awesome power and a mighty hand?
Why should the Egyptians talk, saying:
‘He took them out for no good, to kill them in the mountains
And consume them from the face of the earth’?
Repent of Your wrath, and reconsider the wrong to Your people.
Remember Abraham, Isaac, and Israel Your servants
To whom You swore by Your name. . . .”

You can practically hear the wife saying, “She’s no daughter of mine. Who showed her those nose rings anyway?” But the Lord here is in no mood to put up with any more nonsense, and it’s only by reminding Him of His promises to the patriarchs, and of what the neighbors will say, that Moses cools His wrath: “And the Lord reconsidered the wrong he’d talked of doing to His people.” Then Moses hurries down the mountain, and it becomes his turn to lose his temper. After smashing the two tablets of the covenant, he destroys the calf itself before turning to his brother:

And Moses said to Aaron, “What did this people do to you
That you brought this great sin on it?”
And Aaron said, “Let not milord be angry at me; you know the people, how they’re in the wrong. . . .
So I told them, ‘Whoever has gold let him take it off.’
And they gave it to me and I threw it in the fire and this calf came out.”
But Moses saw that the people were loose,
For Aaron had loosed them to the laughter of their enemies.

Aaron’s version of what happened imputes a magical quality to the calf, implying that it came out of the flames by itself. But the Torah undercuts this lyrical account by switching to Moses’ point of view, in which Aaron’s weakness of character has brought a moral and public disaster to the emerging monotheist nation. Something must be done—and this is where we get to the heart of darkness.

Moses stood at the camp gate and said: “Whoever is for the Lord, to me.”
And every son of Levi gathered to him.

Here the Levites—the tribe of Moses and Aaron, of which the priests are one clan—become the heroes. But despite what the text says, I suspect there was one “son of Levi,” Aaron, who stood out of the way, and we know why.

And he told them, “So says the Lord, the God of Israel:
Put each man his sword on his thigh, crisscross from gate to gate in the camp,
And kill each man his brother, each man his friend, and each man his kin.”
And the sons of Levi did as Moses said
And around 3,000 men fell from the people that day.

The heart of darkness is fratricide. This may be the darkest day in the history of Judaism.

And Moses said, “Take office today for the Lord
For each man did for his son and brother
And put on you today a blessing.”

The phrase I’ve rendered here as “take office” is the same used in Leviticus to describe the inauguration ceremony in which the Levites and priests are inducted into the divine service. This scene is thus a counterpoint to the description of the sink in which Aaron and his sons are to wash their hands. Instead of purity, Aaron has become the author of impurity, and all the other sons of Levi have had to wash their hands in blood. This washing is what has made them fit for office, and the sacrifice has been a human sacrifice.

And the sacrifice is insufficient. Not all the words of the exegetes who seek to excuse Aaron can wipe away the Torah’s final verdict. Even after Moses re-climbs the mountain and prays for forgiveness, the Lord abandons the camp, refuses to travel in it, and sends a plague, not against the idol-worshippers themselves (they’re dead) but against the people as a whole. And who is the one responsible for their actions? The person who made the idol.

We now finally come to the uplifting part, about learning to parent through trial and error. The parashah that follows this one, Vayakhel, starts in an exactly parallel fashion with Ki Tissa, as if nothing has happened, but with one or two key differences:

And Moses gathered all the community of the sons of Israel in a crowd
And said to them, . . .
“Take from among you the donation of the Lord. Each one whose heart is generous shall bring
The donation of the Lord—gold and silver and brass. . . .
And everyone who is wise at heart among you
Shall come and make all that the Lord commanded.”

What’s changed? The Lord and Moses together have learned that the children are not ready for monotheism in the abstract; they still like things that are golden and shiny. So the two start over by letting the people invest themselves as much as they want to in a big golden structure. You want to rejoice before something?, you can hear the Lord saying, fine: I’ll give you the Tabernacle, its walls overlaid with gold. But as for Aaron the high priest, once he starts to offer up sacrifices for Me, he’ll be constantly reminded that his true office is the exceedingly lowly one of the nation’s chief atoner, and that he has everything to atone for.