The Great Book of Grievance

There’s a reason the Torah refers to the endlessly complaining Israelites, who need a golden calf to comfort them, as “the children of Israel.” 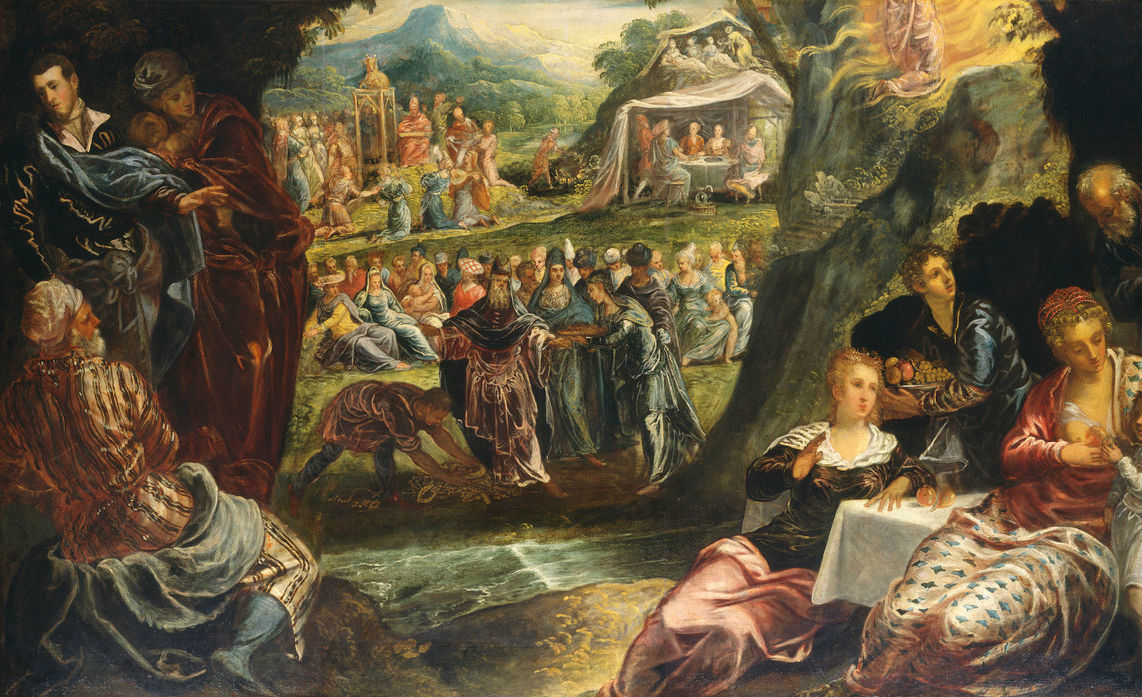 From The Worship of the Golden Calf by Jacopo Tintoretto; c. 1560. NGA.

Two of the Torah’s central lessons became clear to me only when I read Anti-Memoirs, the autobiography of the French writer, adventurer, and critic André Malraux. From fighting on the Republican side in the Spanish civil war, to being captured by the Gestapo in World War II, to serving in the government of Charles de Gaulle, to writing prize-winning novels, Malraux had a colorful career. His “anti-memoirs” begin with a very pointed story.

During the war, Malraux once escaped the Germans in the company of a parish priest. When the two cross paths years later, Malraux asks his former companion what he has learned about human nature from a decade and more of hearing personal confessions. Two things, the priest replies. First, that people are much unhappier than one would think; second, “the fundamental fact is that there is no such thing as a grownup.”

With this in mind, let’s look at the first verse of the book of Numbers, which synagogues begin reading this Saturday: “The Lord spoke to Moses in the wilderness of Sinai.” In giving the book its Hebrew name, Bamidbar (in the wilderness), this opening sentence reminds us of something readers too easily forget: the Torah is a tale of the wilderness.

The Israelites enter that desert wilderness in the middle of the book of Exodus, just after leaving Egypt, and never step out of it for the duration of the Pentateuch. The final verses of Deuteronomy, which conclude that biblical unit, leave us on the far side of the Jordan. Only in the book of Joshua do the Israelites enter the land of Israel, and that book belongs to the Hebrew Bible’s second division, the Prophets.

It is no coincidence that the better part of the Torah takes place in so inhospitable an environment, or that this is the location chosen by God to instruct Israel in His laws. The setting conveys the first lesson of Malraux’s priest, that the world is itself often a place of unhappiness. The Almighty demonstratively does not choose to deliver the Torah to His people in a state of ease, because Judaism is meant to be lived and observed amid all of life’s difficulties and harshness. Even when the Israelites enter the land, they won’t find a perfect, blissful environment but struggle and further difficulty. They must be prepared.

In the course of their wanderings, the Israelites will complain of the lack of meat, water, and vegetables and ask to be returned to Egypt, the site of their enslavement. The book of Numbers might indeed be considered the great book of grievance: Moses complains about having to deal with the complaints of the people (chapter 11), Miriam and Aaron criticize Moses’ treatment of his wife (chapter 12), the spies complain about the fearsomeness of Canaan’s inhabitants, thus causing the Israelites to weep and complain in turn (chapters 13-14), Koraḥ incites a rebellion by complaining about the unfairness of Moses’ having anointed his own brother as high priest (chapters 16-17). Even God Himself gets in on the action, complaining of the people’s idolatry and licentiousness (chapter 25). Moses’ frustrations with the Israelites’ complaints lead him to strike rather than speak to a rock (chapter 20), thereby forfeiting the reward—entry into the land of Israel—that seemed the foreordained culmination of his efforts.

Despite many mitigations of the harshness of the desert—manna from heaven, divine clouds that cover and protect the people, and so forth—the Torah is making a powerful point about the natural order of things. In the immortal refrain of every Israeli cabdriver, life is no picnic (“Haḥayim, zeh lo piknik”).

One might respond that to this geographical problem of the wilderness, Jewish tradition offers a geographical solution. On Passover, don’t Jews conclude the seder with the words, “Next year in Jerusalem”? The Temple in Jerusalem, after all, is the ultimate destination of the desert wanderings; it is “the place where I will let My name dwell,” in the Deuteronomic formulation. But while the land of Israel is pivotal to Jewish history and destiny, it is not a panacea; living there does not cause the difficulties of the human condition to disappear—as the following biblical books make so abundantly clear. And even in Jerusalem, seders conclude not by proclaiming “next year—here!” but “next year in a rebuilt Jerusalem.” Next year, may the harshness of the desert finally give way to the green pastures of the messianic age.

In the meantime we are all, always, in the wilderness.

What should we do with this knowledge? If the ancient Israelites, who experienced God’s redeeming presence at first hand, didn’t perform especially well under the conditions of the wilderness, how is anyone today supposed to do better? Here we come to the second lesson of Malraux’s priest: there are no grownups.

The language of Scripture testifies to this message by consistently calling the people “the children of Israel.” That is true in a literal sense: they are the descendants of Jacob, who is also called Israel. But other terms are available in biblical Hebrew: “the people of Israel,” “the house of Israel,” “Hebrews,” “Israelites.” The Torah, however, uses this particular phrase to draw attention to the fact that they act like children: rebelling, refusing, ungrateful, self-centered, often immature—and thus constantly in need of education and moral guidance.

This “stiff-necked people,” having been infantilized by slavery, has grown accustomed to being treated like a group of children, and when they encounter disappointment and frustration they react childishly. In the book of Exodus, when Moses fails to return from the mountain the moment they expect him to, they build a golden calf—less for theological reasons than for self-reassurance in the face of his seeming disappearance. Like children, they need a stuffed—or, in this case, molten—animal to comfort them in their parent’s absence. They also demonstrate their lack of what developmental psychologists call “object permanence”; once Moses is out of sight, they can’t believe he’ll ever come back.

Of course, a baby eventually learns that when you hide an object behind your back, you can pull it out and produce it again. Children learn not to cry every time mommy leaves the house without them. They learn not to scream and stomp when they don’t get their way. Some of this they learn on their own, much because their parents teach them.

In focusing on the infancy of Israel’s collective history, the Torah tells us that all human beings are children of the wilderness. Seen in this light, the book of Numbers is a story of moral education, and one whose lessons can be applied to anyone’s quest for self-betterment.

The first such lesson is that if you are in the wilderness, you need a map. In the Bible, and in Judaism writ large, that map is the Torah itself, which the Midrash calls nothing less than a blueprint for creation—a poetic way of saying that if you need to find how to move through the world, the Torah has mapped its coordinates.

Bamidbar maps this progress. All through the book there are hints of how God is preparing this people for the land. Balaam, the pagan prophet, blesses them: part of growing up is becoming aware of how one appears to others. A census is taken, and instructions are given for distributing the land, all done “according to the tribe and the father’s house”: family, clan, and inheritance are the way older members of a group provide physically and spiritually for the next generation. Joshua is appointed as Moses’ successor: no one and nothing is indispensable, and losing the parental figure is a painful but necessary step toward maturity.

Indeed, from the moment humanity steps out of Eden, the Torah makes clear its unremitting realism about our condition, telling us time and again that pain is inevitable and that growth is at once demanding and essential. In the book of Numbers we are also shown the conditions that make the journey bearable and ultimately fruitful: the existence of a map through the wilderness and a Guide to point the way.

The Great Book of Grievance