The One Time When Moses Speaks in His Own Words

Deuteronomy erases the separation between leader and led; for better or for worse, they’re yoked together. 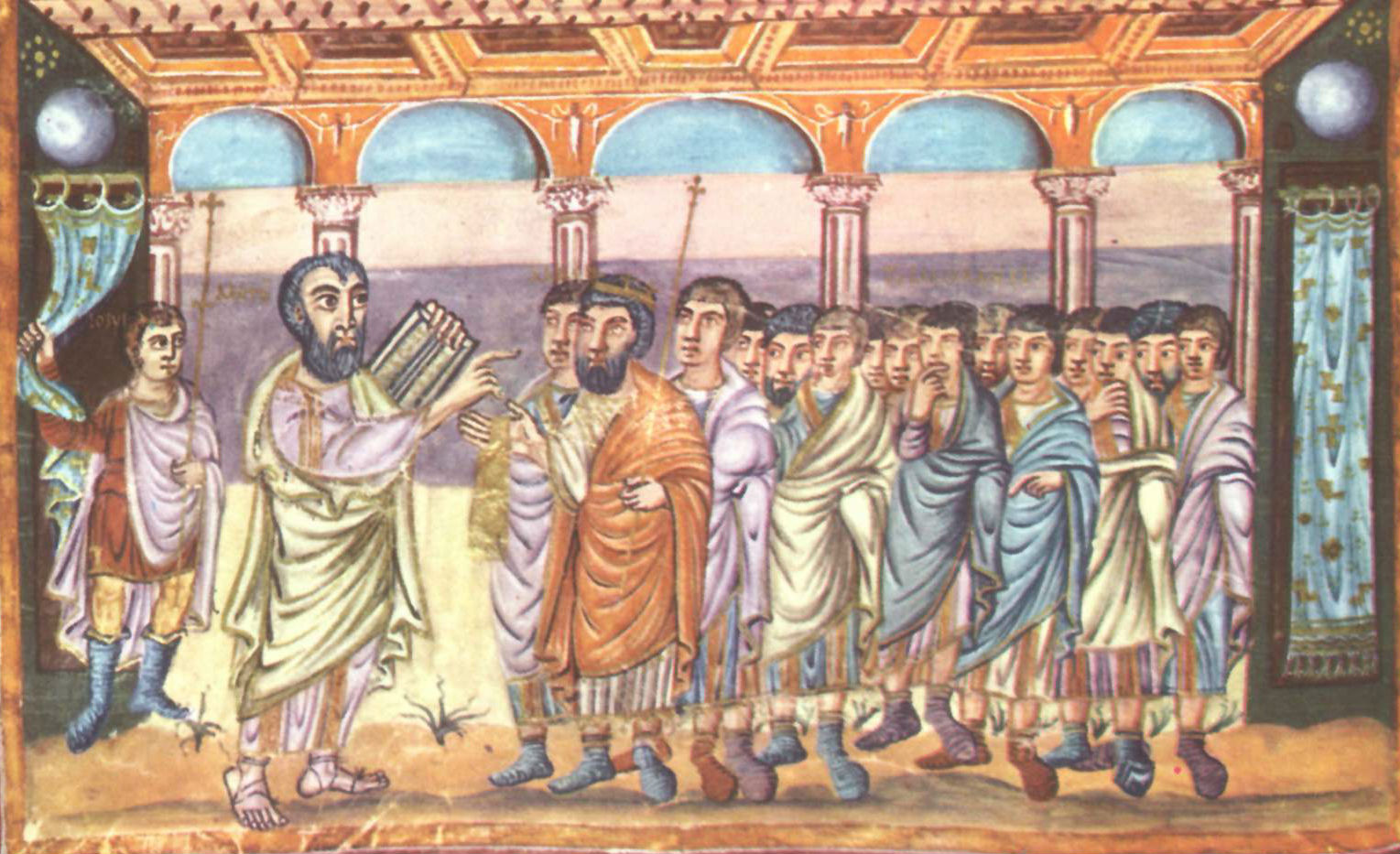 Moses and the Israelites depicted in the Bible of Moutier-Grandval, 835 AD. Wikimedia.

Moses, we are told at the very beginning of the last book of the Torah, spoke “these words” to the people Israel (Deuteronomy 1:1). Unlike the words in the other four books, which are presumed to be the words of God as conveyed through Moses, Deuteronomy consists explicitly of the words of the prophet himself.

Many commentators have marked this difference—and the difference that it makes. For example, the Talmud rules that the long rebuke of the Israelites in Leviticus (26: 14-43) may not be interrupted when read as part of the synagogue service, but the rebuke in Deuteronomy (28: 15-68) may be interrupted—on the grounds that the former, although written by Moses, was dictated by God, while the latter (and longer one) was said only by Moses. Among other such repetitions-with-variations in Deuteronomy, the most famous may be its slightly altered version of the Ten Commandments (5: 1-21). Another is the story of the formation of Israel itself as told by Moses in the book’s opening chapters, which betrays some striking differences from the story as presented to us in previous books.

What message does Moses wish to convey in both repeating and changing the same information? Of course there is no single answer to this question, but from a few of the revisions at the very beginning we can identify one important message that he means to communicate to Israel. It has to do with responsibility and leadership. Thus:

Some psychologically-attuned commentators have attributed these differences to the simple vagaries of memory. We’re all familiar with the syndrome. Indeed, research has shown that the more times you recall an incident, the more likely you are to diverge from the original recollection. Or perhaps, facing death, Moses was simply unable to give an exact recounting of his experience, especially as it might be seen to touch upon possible failings.

Another interpretation views Moses’ soliloquy as the angry rant of a disappointed man. After a lifetime of leading the people toward the land, he was keenly stung by the sheer unfairness of being prevented from entering it himself. Perhaps that was why he held the people to blame for his own sin of hitting the rock. Yet this doesn’t accord with what we know about Moses, of whose character the only description given in the Torah is that he was “a very humble man—more than any person on the face of the earth” (Numbers 12:3). Nor does it track with the other elements of his testimony in Deuteronomy. If he was so angry with the people, why relate that the spies reported good things about the land when we know perfectly well that they did not? Why assign responsibility for the spies’ mission to the nation and not to God?

Here, tentatively, is another explanation. If examined carefully, each of the changes made from the earlier narrative has the effect of tying the fate of Moses and the fate of the people more closely together. In the new version, it was not Jethro who proposed the appointment of judges; it was Moses and the people. It was not God who suggested sending the spies, but the people. Nor was God moved to anger because of their negative report; rather, Moses had approved the people’s suggestion and found the report to be positive. In punishing Moses, moreover, God was reacting not to Moses’ sin at the rock but to the people’s faithlessness, a dereliction in which He judged Moses to be implicated.

All of these revisions eliminate the intermediaries: whether Jethro in one instance or God in all of the others. In each case, Moses subtly reminds Israel that the polity cannot be separated from the leadership it has chosen. As he approaches death, Moses, who has stood throughout as an intermediary between the people and God, now weaves himself into the collective memory of Israel and makes them forever conjoined.

This may also explain the startling omission from the Deuteronomy narrative of one major event: the rebellion of Koraḥ. Unlike in the other rebellions and complaints against authority that permeated the Israelites’ trek through the wilderness, which Moses does recount, Koraḥ was revolting not against God but against Moses himself. That may be why, in Moses’ insistence here on the essential kinship of the people and their leader, Koraḥ, who strikes a dissonant note, must be simply ignored.

And what is the purpose of Moses’ tying himself so closely to Israel? Before anything else, I’d point to the overall mission of Deuteronomy, a book dominated by the theme of listening. The great Sh’ma (“Hear, Israel”), which appears in chapter 6 (4-9), is preceded by numerous occurrences—ten in the fifth and sixth chapters alone—of the Hebrew word meaning to hear or hearken. Moses wants his words to ring through the generations. Acutely conscious that the people are prone to forget, God’s emissary on earth aims to reinforce the divine message by encouraging the people to remember this message as conveyed to them repeatedly in his own words, somewhat in the manner that the words of Lincoln have been engraved on the hearts and in the memories of Americans to this day.

Yet Moses, who passes on his authority to Joshua before the eyes of the people, is also aware that a nation must take responsibility for its leaders. Time and again, ever since God first chose Moses, the Israelites showed just how prepared they were to disavow him: in the incident of the golden calf, in the Koraḥ rebellion, and in sundry other ways throughout the books of the Torah starting in Exodus. After all, it seemed to them, Moses was God’s choice, not theirs. Now he reminds them that a leader and his people are not so easily separable. Their fates are intertwined.

Indeed, the lesson taught by Moses will be enacted repeatedly throughout the subsequent history of Israel—from the judges, to David, and beyond. For better and sometimes for worse, the people and their leader are yoked together. They have traveled together, suffered together, fought together. Deuteronomy retells history in order to erase the separation between them, along with the pretense that the leader is not the people’s emissary but someone, or Someone, else’s. Facing death, Moses rewrites the score so that, in the resultant symphony, orchestra and conductor become one.

The One Time When Moses Speaks in His Own Words