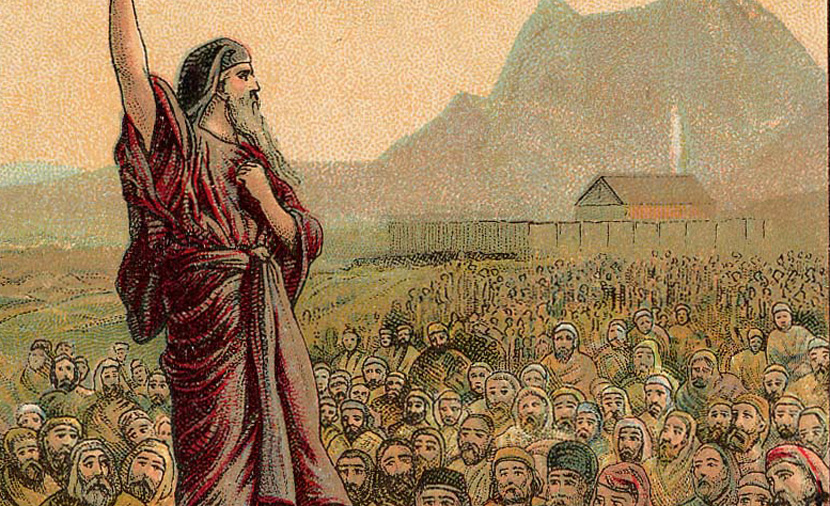 There is an elegiac quality to this week’s reading of Va’etḥanan (Deuteronomy 3:23 – 7:11). It begins, as David Wolpe noted here last week, with Moses having to accept that he won’t be receiving what he was promised, and won’t be crossing over with his people into the land. And then it gets worse. Moses is deeply worried that without him, when the Israelites are left to their own devices, all will be lost.

In this light, the Sh’ma and all the instructions that surround it, which are at the heart of Va’etḥanan, and which like many other passages in this reading have made their way into the siddur, turn out to be instances of Moses warning the Israelites of trouble ahead and thus protecting his investment in them. Do this, he exhorts them, don’t do that, watch out:

In case you hadn’t noticed, Moses now says to the Israelites, I’m dying out here in the desert: your God is not always reasonable to deal with, and I know what I’m talking about. Whatever you do, don’t get Him mad. But also remember: if things turn really bad between you, there’s an out:

When you are in dire straits and all these things
Have come upon you in those distant days
Just return to the Lord your God and listen to Him.

He even offers the Israelites a little rueful flashback to happier times, recounting the moment when he and the Lord exchanged a little banter about the children in their care and the Lord assented to their desire not to hear anything other than His voice booming the Ten Commandments (repeated in full, with variations, in this parsahah) out of the thunder and lightning at Sinai. They’d asked for Moses to go and act as intermediary, and the Lord thought that was a good idea. But He also shared Moses’ skepticism about just how long this devotion would last:

Would that they had this heart about them to fear Me
And keep My commandments all the days
So it would be good for them and their children for all time. . . .

And that skepticism, Moses reminds them, was well founded. And so the Lord has proceeded to dictate a message, the Sh’ma, that the Jews can carry away with them on their travels into the land of Israel and beyond:

Listen, Jews, the Lord is our God, the Lord is one;
But you’ll love the Lord your God
With all your heart and with all you wish and with all your wealth.
And let these words that I’m instructing you be on your mind
And quiz your sons about them and talk them through
When you sit in your house and walk about your way,
When you lie down and get up.
And tie them for a symbol on your hand
And they’ll be a diadem between your eyes
And write them on the lintel of your house
And at your gates.

This is no kindly advice, however—no reassurance that, one of these days when you get into trouble, everything will be OK because as long as you look for Him, the Lord will take you back. Not so easy. As Rabbi Yitzḥak ben Pazi of Yeshivat Maaleh Gilboa once suggested, the Sh’ma, far from being a triumphal declaration of faith, is instead an acknowledgment that the return to the land of Israel and the brave attempt at monotheism are bound to go wrong.

Against that day, Moses is giving the Jews a kind of safety net. When those nations that they’re going to drive out of the land nevertheless manage to lead them astray into idol-worship, when the much-anticipated Temple is built and then falls, when the land is lost again and the Jews are scattered to the winds, the Sh’ma will be there for them to turn to and try, with its help, to put the pieces back together again.

I have been deliberately ignoring the second and third paragraphs of the Sh’ma as it is presented in the prayer book, passages taken from other places in Deuteronomy and Numbers, because the halakhic literature views the first paragraph as the most essential element. Actually, in the opinion of the Mishnah you don’t even have to mean every word of the whole paragraph:

The rabbis taught: “Hear O Israel, the Lord is our God, the Lord is one.” Up to here, the heart’s concentration is required, according to Rabbi Meir. Rabba said the halakhah accords with the words of Rabbi Meir. (Tractate Brakhot 13b)

Following this view, Maimonides, in a ruling taken up centuries later by Joseph Karo in the Shulḥan Arukh, elaborates as follows:

So there are two more paragraphs but they either recapitulate or add incentives to fulfill the terms of the first. Even the promise in the second paragraph that rainfall itself—vital to survival in the promised land—will be contingent upon worshipping the Lord seems to assume that worship will lapse and the Jews will weaken in the face of idolatry. That’s what the fringes on your garment in the third paragraph are meant to combat, as a physical reminder much like the words tied to your hand and between your eyes.

But these are all rear-guard actions. The essential commandment Moses tries to instill as he stands on the doorstep to say goodbye is to love the Lord, and that is a tall enough order. Just how tall, Maimonides makes very clear:

One who worships out of love busies himself in the Torah and commandments and walks the paths of wisdom—not for anything in this world, not for fear of evil and not to inherit the good, but rather he does what’s true because it’s true, and an eventual good will come because of it. And this virtue is a very great virtue and not every wise man merits it. It is the virtue of our forefather Abraham whom the Holy One Blessed be He called “My friend” (Isaiah 41:8), because he didn’t worship except out of love. And it is the virtue the Holy One Blessed be He instructed us through Moses, for it says, “But you shall love the Lord your God”—and at the moment a man loves the Lord with an appropriate love he will instantly perform all the commandments out of love.

I have always thought of the first paragraph of the Sh’ma as a radical document, not unlike the Declaration of Independence with its wonderfully stirring invocation of “life, liberty, and the pursuit of happiness.” The second paragraph of the Sh’ma is more like the Constitution, a conservative document trying to foresee complicating eventualities and introducing checks and balances.

But that first paragraph with its glorious vision of an endless love of the Lord, a radical love that takes in all parts of your earthly existence—that is the vision offered by Moses as he waves his children off and hopes for the best. The Sh’ma is the Lord’s telephone number. As Moses looks out over the land from the mountaintop, something tells him that they’re going to need it.