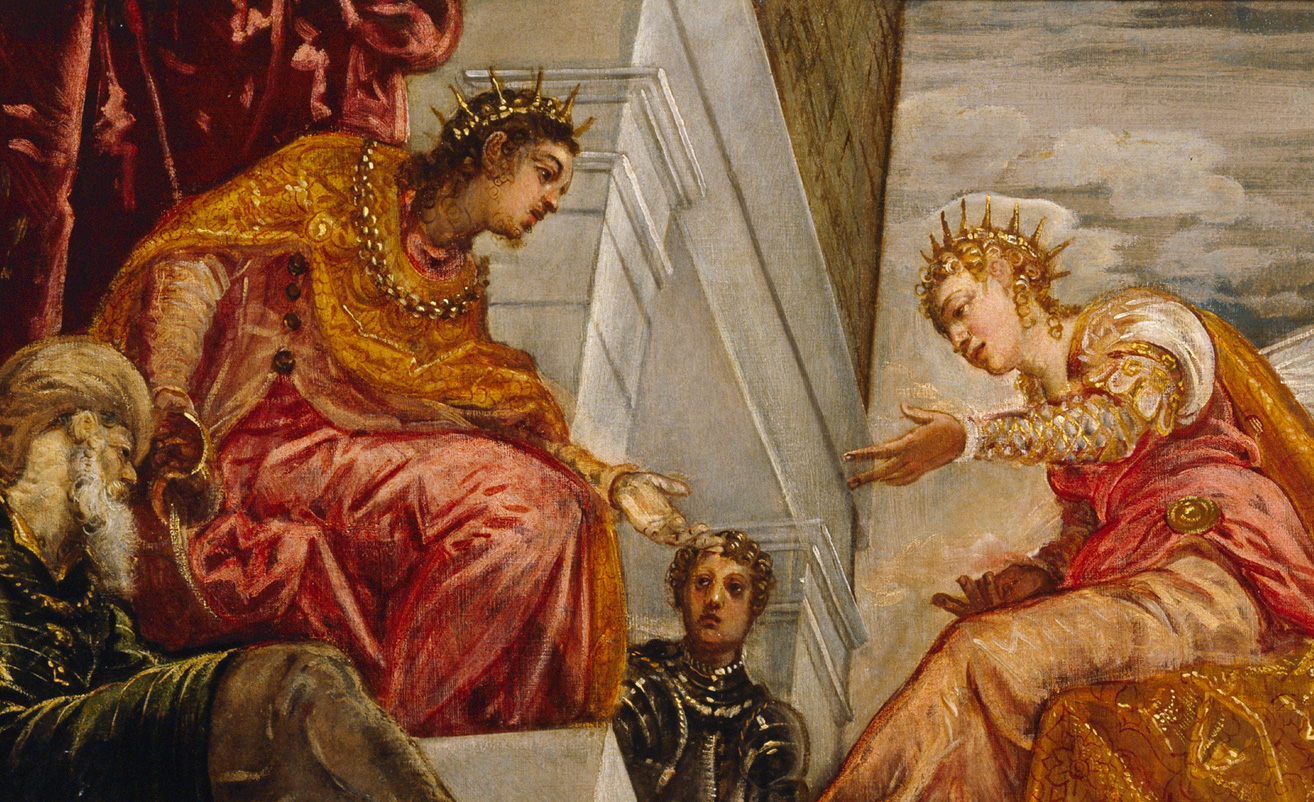 From Solomon Receives the Queen of Sheba, Tintoretto, 1555. Wikimedia.

This week’s Torah reading of Shoftim (Deuteronomy 16:18-21:9) concerns itself, more than any other, with political matters. It begins with the commandment to appoint “judges and officers in all your gates,” and ends with the laws of war. As is true throughout Deuteronomy, many of the precepts found in Shoftim are repetitions or elaborations of injunctions from previous books of the Torah. But one passage stands out both for its significance and for its novelty:

Most surprising about this verse is its ambiguity: is appointing a king a requirement, or simply an option? And that’s not all: to the modern Western reader, accustomed to constitutions, the setup appears counterintuitive. One would have thought the Torah would prescribe a particular regime, and that the people would have some say regarding who, exactly, should rule. Instead, the people are to choose the form of government—evidently a monarchy—but the monarch himself is chosen by God. Similarly unclear is how God will make His choice known.

To add to the ambiguity, the Torah, without any elaboration of the king’s powers, immediately begins explaining what he may not do. In particular, he may not have “too many horses,” “too many wives,” or “too much silver,” since an abundance of possessions can lead to misbehavior. To hold him in check, the king is also commanded to keep a copy of Deuteronomy itself (or perhaps the whole Torah), written for him by the priests, and to read from it daily “lest his heart grow haughty over his brethren, and lest he stray from [God’s] command.” In other words, rather than instructing the Israelites in the prerogatives and perquisites of monarchy, let alone its benefits, the Torah issues an almost Madisonian warning about how to keep the monarch out of trouble.

The Talmud frankly acknowledges the perplexing quality of this passage:

Rabbi Yehudah said, “Three commandments were given to Israel [to fulfill] upon their entry into the land: appointing a king, destroying Amalek, and building the Temple.”

Rabbi Nehorai said, “The passage [about appointing a king] was given only in response to [the Israelites’] murmurings, as it is written, ‘And you shall say, Let us appoint over ourselves a king. . . .’” (Deuteronomy 17:14)

The debate between Rabbis Yehudah and Nehorai boils down to a question of whether the monarchy is a positive commandment—like celebrating Passover, or circumcision—or a choice that can be pursued if necessary and only as a concession to human weakness. Is it an ideal, or a compromise? While most medieval authorities, Maimonides included, accept Rabbi Yehudah’s opinion that a king was mandatory, descriptions of the monarchy found in the Bible itself, notably in the books of Samuel and Kings, would appear to support Rabbi Nehorai’s opinion.

Take this inaugurating passage in 1Samuel:

All the elders of Israel assembled and came to [the judge and prophet] Samuel at Ramah, and they said to him, “You have grown old, and your sons have not followed your ways. Therefore appoint a king for us, to govern us [literally, “judge us”] like all nations.” Samuel was displeased that they said, “Give us a king to govern us.” (8:4)

This is precisely the scenario envisioned in Deuteronomy, down to the phrase “like all the nations.” Samuel, who had served as the Israelites’ ad-hoc ruler for many years, is disappointed with their request, perhaps because it appears to be an affront to God’s own kingship or an indictment of Samuel’s leadership. Yet God affirms their right to make it:

Here ambiguity gives way to irony and complexity: according to God, the people should have a king even though this entails nothing less than a rejection of Himself—and Samuel shouldn’t take it personally.

The story will get even more complex. Later in the Bible, the reigns of David and Solomon—especially the latter’s construction of the Holy Temple—are exalted as great and glorious goods in themselves; the book of Lamentations refers to the king as nothing less than “the breath in our nostrils.” These texts assume the potential of a king to unify and elevate a nation in the service of God in a way that other kinds of leaders cannot realize. So, too, we might say, Deuteronomy’s image of the Jewish king, chosen directly by God and with a copy of the guiding text of His people perpetually at his side, suggests a lofty ideal rather than a compromise.

I think we can put these pieces together by looking more carefully at the context of the passages in Deuteronomy and 1Samuel. This week’s Torah reading of Shoftim mentions not only the king but also three other sources of political authority: the judge, the priest, and the prophet. As we see not just in this reading but elsewhere as well, each has a particular role to play.

Thus, the judge acts not only as a judge in the modern sense but also as a kind of local or regional leader (think for example of Gideon), intervening in specific conflicts and even leading the people into battle. In Leviticus, we hear most about the priests, who oversee the ritual life of the nation and its cultic center, and are the primary teachers of the Torah. The prophet takes his cues directly from God Himself and acts as a spiritual adviser to sovereign and nation alike.

Finally, and in contrast to any of these other leaders, the king enjoys greater power but also appears most prone to pitfalls. To be sure, all four types will appear in the Bible in both their ideal and their corrupted versions.

If Shoftim clarifies the nature and role of each type of leader, in the first book of Samuel we see all four on display. Samuel himself is born long after the last of the judges who were able to unify some or all of the tribes; instead, Eli, the high priest, is now the greatest political authority. But Samuel, while still a youth, discovers himself to be a prophet, chosen by God to succeed Eli as the leader of the people, and later in his life he is also described as a judge (1Samuel 7:15-17).

Yet the Israelites want still more. This desire is, in part, political and practical: the message of the book of Judges, directly preceding Samuel, is that judges have failed to secure anything but temporary relief for Israel. Likewise, both Eli and (even more so) Samuel, although great leaders, have sons unworthy of succeeding them. Understandably, the people desire a more stable and less transitory system.

And there’s more to it than that. The Israelites’ desire for a king is seen as expressing a kind of primal spiritual longing. As Samuel says to Saul (9:20), “And for whom is all Israel yearning, if not for you and all your ancestral house?” God’s response to the people’s request for a king—that it is a rejection of His own sovereignty as the “King of Kings”—acknowledges this yearning even as it tells us something about its problematic nature. When the long-kingless people demand a king from Samuel, they are at heart asking for a kind of spiritual revolution.

If this request is problematic, however, it is also potentially transformative. Chosen by God, the Jewish people have at times flourished under a political system very different from that of other nations—one lacking a central sovereign who might tread on God’s sovereignty. Now its chosenness will be manifested in a more dramatic way: through the institution of a normal regime (“a king . . . like all the nations”) whose authority can yet be harnessed to propel the Jewish national-religious culture to greater heights. If politics can serve as a dangerous substitute for God, it can also be conducted in the service of God.

In this light, it is noteworthy that the monarchy begins twice. Saul, the first king, has tremendous potential as a leader but ultimately represents something of a false start. David, despite his flaws, is blessed by God and promised by divine decree that his “throne will be established forever.” And remember, the Temple is built only after the monarchy has been firmly established under David.

Some modern biblical critics have seized on the dual selection of Saul and then David, as well as on Samuel’s mercurial responses toward the institution of kingship more broadly, as evidence of an internal debate between pro- and anti-kingship worldviews in a much later period of Jewish history, retrojected by the Bible’s compilers to an earlier time. A closer examination of Deuteronomy 17 and 1Samuel suggests a more sophisticated conception. Kingship can indeed be a stumbling block, and the lows to which a central political authority could bring the nation are lower than they might be under a different system. But then, against this, there is the promise of monarchy redeemed: the right king has the potential to bring the Jewish people much closer to their true King, and to the fulfillment of their national destiny.