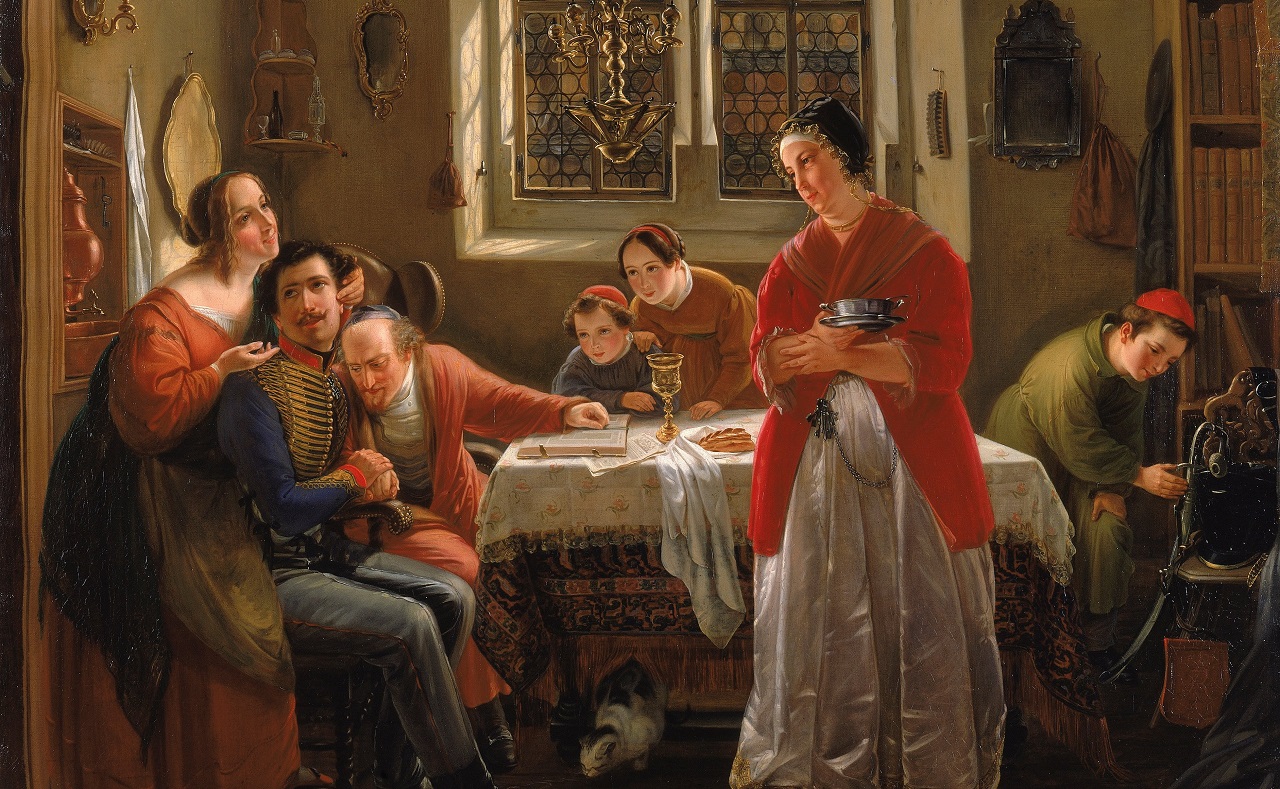 Detail from Moritz Oppenheim, The Return of the Volunteer from the Wars of Liberation to His Family Still Living in Accordance with Old Customs, 1834. Wikimedia.

After the invitation to the angels to bless the household, and before kiddush is recited and the family sits down to the Friday-night meal, the prayer book offers a song praising the ideal woman. Known as Eyshet Ḥayil, or “woman of valor,” the song is organized as an alphabetical acrostic (i.e., each verse starts with a new letter, in alphabetical order), and is in fact the concluding passage of the biblical book of Proverbs (31:10-31).

But why should the woman of the house be serenaded on Friday night—if that’s whom the song is really addressed to?

The scholar and educator Rabbi Issachar Jacobson (1901-1972) begins his magisterial discussion of this poem with a quotation from an earlier commentary on Jewish liturgy by the German Orthodox scholar Abraham Berliner (1833-1915). According to Berliner, “the poem was not placed in the prayer book—as is today erroneously supposed—to greet the housewife who governs the home with a Sabbath blessing.” Instead, Berliner endorses the opinion of the kabbalists, who believe the poem to be addressed to the Divine Presence, the Sh’khinah—conceived as God’s feminine aspect.

Supporting and elaborating on Berliner’s view is another work cited by Jacobson, Zmirot Shel Shabbat (Hymns of the Sabbath, 1949), by Naftali Ben-Menaḥem. Rather than referring to “the housewife who’s labored all week in the household,” Ben-Menaḥem writes, the song’s 22 verses (one for each letter of the Hebrew alphabet) represent the 22 channels that are opened on the Sabbath to allow divine blessings to flow into the world from the supernal realms.

After citing these kabbalistic interpretations, Jacobson then abruptly veers off in a different direction, noting the great number of sages who insist on reading the poem according to its plain sense. These include such heavy hitters as Abraham ibn Ezra (1089–1167) and Meir Leybush ben Yeḥiel Mikhl Wisser, known as the Malbim (1809-1879).

But before returning to this difference of opinion and to Jacobson, let’s have a look at the poem itself:

Who shall find a woman of spirit,

For her price is far above pearls.

A husband’s heart that trusts in her

Shall not want long for spoils.

She’ll requite him good and not ill, all the days of her life.

She’ll seek out wool and fustian

And want to keep her hands employed.

Bringing her bread from afar.

She’ll rise in the dark to give her household food, her maids their daily bread;

She’ll spy a field and acquire it, plant a vineyard for the fruit of her own hands.

She’ll gird her loins with might and strain with both her arms.

Her taste is fine for she’s a trader, at night her candle’s never snuffed,

Her hand she puts to the bobbin and her palm to the woven cloth;

Her palm is open to the needy, and she’ll stretch out her hand to give alms,

She’ll not fear for her house in snowfall, for all are dressed in scarlet wool fine.

Rugs she’s made by her own hand, she’s dressed in linen and purple,

Her husband is known at the city gates, for he sits with the local council;

She fashioned a sheet and sold it, and a purse to give to the merchant,

She’s bravely and splendidly decked out and laughs on the last day.

Her mouth she opens with wisdom, and learned kindness on her tongue.

(Malbim in his exquisite commentary dwells on the connection between this line and the preceding phrase “laughs on the last day”: it’s not, he writes, that she’ll have the last laugh but rather that “she’ll open her mouth on the day of judgment regarding the wise laws she followed, and on her tongue will be learned kindness—what she did beyond the letter of the law—and that will be her counsel for the defense on judgment day.”)

She’s watchful over her household’s ways and won’t eat the bread of idle hands.

Let her sons stand and praise her, her husband sing her renown—

Many girls have done splendidly but you have outshone them all.

Charm is trickery and beauty a melting mist,

A woman who fears God is who deserves eulogy.

Giver her what her own hands have made

And praise her at the city gates.

Is there anything here to support the mystical interpretation of these verses? Speaking for myself, I’ve never imagined the Divine Presence as in need of rugs, since it has no body to keep warm, but perhaps I’m incurably literal. In any event, let’s now see what the less kabbalistically inclined rabbis have to say, starting with the talmudic sages themselves.

Rabbi Isaac bar Nehemiah said: Just as the Holy One Blessed be He gave the Torah to Israel in 22 letters, so too He praises fitting women in 22 letters.

That is to say, the A-Z alphabetical acrostic represents a sort of totality of written language, which makes Eyshet Ḥayil a hymn in praise not so much of as by the Divine Spirit.

In his commentary on the book of Psalms, which also frequently employs alphabetical acrostics, David Kimḥi (1160–1235) similarly claims that every psalm written with that device “appears, by its greatness and the important things said in it, to have been spoken with the Divine Spirit.” This certainly concurs with Isaac bar Nehemiah’s implication that Eyshet Ḥayil is not a meditation by King Solomon—traditionally taken to be the author of the book of Proverbs—but praise spoken by God Himself for the ideal human woman.

Now consider this, from the midrash on Proverbs:

Rabbi Yossi bar Rabbi Jeremiah said: why do we say prophets are like women? As much as this woman is not ashamed to demand her household needs from her husband, just so prophets are not ashamed of demanding the needs of the Jews from their Father who is in heaven.

You might see Yossi as trying to have his cake and eat it. That is, first he equates the woman of spirit with a prophet, then he asserts that the demands she places on her husband are admirable only because they are like the demands the prophets place on the Lord. But here lies the entire crux that Jacobson’s argument will turn upon. Is it the glory of a woman of spirit that she secures justice and bread from her husband, as the prophets did from the Almighty, or, to the contrary, that she takes such concerns entirely off her husband’s hands?

David Rozin, best known for his critical edition of the 12th-century Torah commentary of Shmuel ben Meir, wrote a penetrating analysis of the song that detects the darker hues amid the Breughelian picture of housewifely bustle. To Rozin, the poem traces the life of the ideal woman from youth to death. The first fifteen verses “depict the nimbleness and vigor of a young woman at the height of her energies.” The next few reflect a woman whose vigor has begun to diminish and who’s now mostly concerned with supervising household activities and imparting wisdom. The part where her husband and children rise to praise her, alas, actually refers to the eulogies they deliver at her grave.

And the final verses, about the trickery of charm and melting mist of beauty?

She was the speediest of the speedy, but all her charm and beauty were as naught next to her kindliness and righteousness. Hence the listeners are enjoined to set aside for the future some of the good will and admiration she acquired in the course of her life, because her deeds are what will sing her praise.

As if this were not enough of a damper on anyone’s mystical inclinations, Jacobson himself then ventures an opinion (a rare occurrence in his book).  Turning away from Berliner’s mystical approach, he notes that all of the virtues attributed to the woman require her to have money, or at least a comfortably middle-class life:

What does Solomon come to tell us by choosing a woman of solid economic standing and not of the class of most people, where the husband is the breadwinner? In my view, Solomon wanted to show us how far a woman’s power may extend if she’s endowed with positive and admirable qualities and faces no economic obstacles.

So far, so good. These verses, in effect, speak of a liberated woman who can enter the workplace and the public sphere if she’s so inclined and circumstances permit. But then Jacobson cautiously suggests that if the husband is indeed “sitting at the gate,” then the woman might actually be the family breadwinner:

Perhaps . . . we shall not miss the mark if we note that the great moral which the song “Woman of Spirit” seeks to impart to future generations is that the ideal woman should relieve her husband with all her might from the burden of earning a living so he can devote himself to studying Torah, just so long . . . as the financial position is . . . stable and the woman is burdened merely with the worry of preserving and maximizing the family’s already existing assets.

Here Jacobson seems to be supporting the practice—extinct in his native Germany, sporadic in Eastern Europe, but commonplace among today’s Israeli ultra-Orthodox—in which the wife works and the husband “sits and learns.” But the uniqueness of Jacobson’s intervention and the curiously sociological veneer of his argument make me suspect that something more is going on here, especially since I have my doubts that King Solomon was all that acquainted with the middle classes.

Why did Jacobson feel so strongly about this song, and phrase his argument so artfully? A hint may be found in the fourth of the five volumes of his commentary on the siddur, which also contains a biographical sketch of Jacobson himself by one Ephraim Yair. In this essay, Yair wonders how such a sickly, frail man, whose ordination certificate from Germany had uniquely identified him as a rabbi fit for teaching but not for the strenuous physical challenges of pounding sense into the heads of a congregation, could have written so many books, not to mention his tireless work as a teacher both in a school and at the open house he kept every Friday night.

After ascribing Jacobson’s supernatural abilities to the spiritual inspiration drawn from the sacred texts, Yair writes:

The wife of a friend is like your friend; there is no telling stories about Rabbi Issachar Jacobson without mentioning his partner and wife, Hannah Edith neé Weisberg, may she merit a good long life. Jacobson himself never concerned himself in his life with business matters—the very concept of “money” was not in any way, shape, or form within the scope of his interests. . . . Therefore, we must acknowledge the importance of his “fitting helpmeet” [Genesis 2:20], who managed his household. . . . She [also] proofread his books, making sure every word, large or small, was in its proper place. She conducted negotiations with the publisher. Without her Jacobson would not have merited accomplishing what he accomplished. It was she who enabled him to do his literary work in spiritual peace and quiet.

So if you ask, after welcoming the Sabbath angels, are we next singing to the Divine Presence or to the lady of the house, you have two prevailing views: the view of the kabbalists and the view of the earthbound reckoners of the way life is conducted and the costs of wisdom. Rabbi Jacobson, for one, seems to have known on his own flesh, so to speak, that nothing gets done at home on its own, and that if you want to pursue something other than laboring in the marketplace, you’d better have support. Does that support come from the 22 channels above that are open on Friday night—or from her? You tell me.