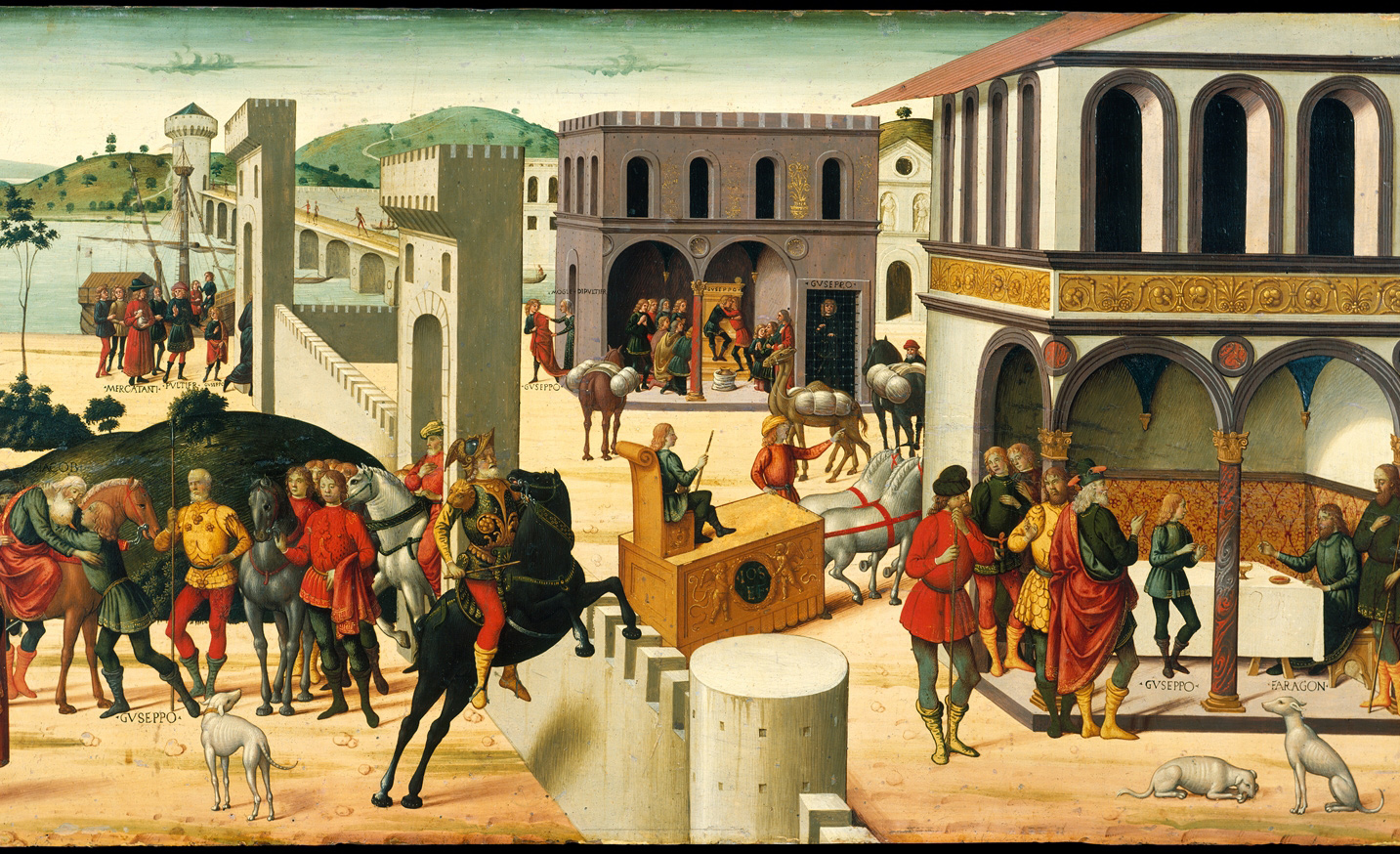 From The Story of Joseph by Biagio d’Antonio, 15th century. The Metropolitan Museum of Art.

This week’s Torah reading of Sh’mot is the first of the book of Exodus, and in a sense it marks the great leap from Genesis and the story of Creation to the story of slavery and redemption. But I’d like to hark back to the conclusion of Genesis, specifically for the purpose of comparing Joseph, the protagonist of the book’s last fourteen chapters who leads the Jews down to Egypt, with Moses—introduced in our parashah—who takes them out. Which characteristics distinguish them as leaders? Why did God choose them for their respective tasks?

Let’s look first at the Joseph story, which begins thus:

These are the generations of Jacob: Joseph at seventeen years old
Was shepherding his brothers with the flock, and he was a boy
With the sons of Bilhah and sons of Zilpah, his father’s wives,
And Joseph brought their ill report to their father.

This passage lays out, front and center, the vital element of Joseph’s career: he is the fulcrum of his father’s life. Jacob has vast wealth, many sons, and three wives, but the “generations of Jacob” amount to only the one son whom he loves to distraction: Joseph. And that son therefore has tremendous power right from the start and no idea of how to use it; he is just a boy. When sent by his father to supervise the older brothers, who are clearly treated as of lesser standing because they were not born of the beloved wife Rachel, Joseph sows the seeds of his own enslavement by becoming a tattletale. And later he goes on at length about his dreams, so privileged as to be entirely unaware that this will compound his brothers’ jealousy and resentment.

Of course, the mature Joseph, the one we see in the very last chapter of Genesis, is savvier; he has by this point become Pharaoh’s vizier and the second most powerful man in Egypt. But he is never more and never less than Jacob’s son—and when Jacob dies, Joseph first “crouched over his father’s face and wept over him and kissed him” and then uses his authority to preserve him and hold onto him a little longer: 40 days to embalm him, Egypt-style, then another 30 to mourn. Only then does Joseph accede to Jacob’s dying command that he be buried in Canaan.

Where Joseph has changed is in his ability to talk to his brothers. After Jacob’s death, they are quaking in their boots, certain that they will finally earn their just deserts for having thrown their brother in a pit to die. But vengeance is the last thing on Joseph’s mind. And here we see the unique ability to convince and win the trust of others that has served him so well. He is never more adept than when speaking to or wielding power, all the while acknowledging God’s implacable purposes and being ready to manage the resources at his disposal. He tells his worried brothers:

“Do not fear—for am I in place of God? . . .
I myself shall provide for you and your little ones.”
And he changed their minds and communed with their hearts.

In our final encounter with Joseph—indeed, the final scene in the book of Genesis—we see another conversation between him and his brothers, this time at his own deathbed:

Joseph told his brothers: “I am dying,
But God shall visit a visitation upon you,
And raise you from this land
To the land he promised to Abraham, Isaac, and Jacob.
And Joseph made the sons of Israel swear, saying: God will visit a visitation upon you,
And you shall raise my bones from this place.
And Joseph died at a hundred and twenty years old
And they embalmed him and he was put in a coffin in Egypt.

This is the image with which the book of Genesis concludes: Joseph, the leader of the Jewish family, embalmed—mummified, perhaps, as was the Egyptian way—and then placed in an aron. Usually translated as “coffin,” the word aron literally denotes a box. For all his demand that they swear an oath to get him out one day, Joseph has led the Jews into a box.

Now let’s look at Moses, whom we first meet in the second chapter of Exodus:

A man from the house of Levi went and took a daughter of Levi.
And the woman conceived and bore a son and she looked him over that he was good.

Note that the as-yet-unnamed Moses is the first significant character in the Bible—excepting Adam and Eve—to be introduced with the name of his father unstated. (We find out his father’s identity only in 6:20.)

In the ensuing story of this nameless, unpedigreed baby, the prime mover is his mother; the father has no role whatsoever. She hides the baby, puts him in a basket of reeds, and sets it on the river, saving him from the new Pharaoh, who has commanded that all male Israelite infants be thrown into the Nile. In her rescue of Moses she is joined by various female surrogates: the midwives who disobey Pharaoh’s order and its attempt at ethnic cleansing, the baby’s sister who keeps an eye on the basket and arranges for his care, and the Egyptian princess who retrieves and adopts him. Moses’ father is out of the picture.

We next confront Moses in adulthood—given a name not by his father, mother, or God but by Pharaoh’s daughter—and we start to learn something of his character:

And it got to be the time when Moses had grown and he went out to his brothers
And looked over their sufferings.
And he looked over at an Egyptian man beating a Hebrew man, one of his brothers,
And he turned this way and that and looked that there was no man there
And he struck the Egyptian and hid him in the sand.
But he went out a second day and here were two Hebrews scuffling
And he said to the wicked one: “Why are you beating your friend?”
And he said, “Who set you up as a bigshot, minister, and judge over us?
Are you talking about killing me as you killed the Egyptian?”
And Moses was rattled and said, “There’s no denying the business has been discovered.”

This is our first view of Moses as an adult, the equivalent of the scene with Joseph at seventeen. Unlike Joseph, Moses is much more self-aware and sensitive to his surroundings. Joseph grew up in a world where his father’s love, expressed in such material goods as a splendid coat that everyone envied, was so palpable a presence that he didn’t need to pay attention to anything around him. He’s too naïve to realize that his dreams will further aggravate his brothers’ jealousy, and thus he walks unsuspecting into an ambush and gets thrown into a pit. It’s as if he’s so secure in Daddy’s love that he’s never had to contemplate danger, resentment, or enmity.

By contrast, when Moses goes out into the field to see how his brothers—not his literal brothers but his fellow Israelites—are living, he is acutely aware of the hostile surroundings. Witnessing injustice, he instinctively looks behind him to check what the repercussions will be if he takes action. He knows Pharaoh will punish him if he steps out of line; he lives in the palace only as a tolerated guest.

But combined with this awareness is a decisive and independent-minded drive to do good at any cost. He sees the Egyptian beating the Hebrew, scans the horizon for witnesses, and kills the Egyptian.

Here is our first inkling that Moses will not be a wooing-and-communicating kind of leader, the kind who seeks to change hearts and minds, but rather a force for implacable justice. But then again, as he discovers the very next day, there are no hearts and minds available for changing. The Jews are squabbling among themselves and not amenable to being given moral direction. He flees for the desert, where he becomes a shepherd and meets his future wife Zipporah, daughter of a Midianite priest.

In Midian, Moses has a son whom he names Gershom—literally “a stranger there”—“For he said, I was a stranger in an alien land.” Contrast this, too, with Joseph, who instead of fleeing Egypt to live among the Midianites is sold by Midianites into Egyptian slavery—where he, too, marries the daughter of a pagan priest. But unlike Moses, who recognizes that he is a perpetual outsider, Joseph names his first son Menashe (from a word meaning “to cause to forget”), declaring, “for God has made me forget completely my hardship and my father’s home.” Moses, whether living in the palace or in the wilderness, recognizes that he is just passing through, and that the world around him is hostile.

And Moses was shepherding the flock of his father-in-law Jethro, a priest of Midian,
And he was leading the flock through the desert
And he came to God’s mountain, toward Horeb.
But the Lord’s messenger revealed himself to him in a flame inside a thistle
And he looked over
And here was the thistle burning with fire but the thistle was not being eaten up
And Moses said, “Let me turn and see this great sight: Why does the thistle not burn?”

At this final moment before the meeting of Moses and the main protagonist of Exodus (who is not Moses, and not human), we see exactly what he brings to the table that Joseph, the favorite son, does not. Joseph seems drawn to material things: we read of his beautiful coat, his golden chariot, and his silver goblet; Moses appears perfectly comfortable in the desert. Joseph did not need to be aware of his surroundings, and would never have noticed a flame burning in a thistle in the middle of the desert; Moses is always alert. If one particular thistle in the vast emptiness is behaving unnaturally, he notices and investigates.

And then what happens?

And the Lord saw that he had turned aside to look,
And God called to him from out of the thistle
And He said, “Moses, Moses,”
And he said, “I am here.”

Now, suddenly, we have the Lord speaking to Moses the way He spoke to Abraham at the binding of Isaac, calling him by name twice, and Moses responds as Abraham did: “I am here.”

And here we see another great difference in leadership. Joseph could give the Lord credit for his power to interpret dreams and to woo and change the minds of others. But he never hears the Lord’s voice or addresses Him; his dialogue is with those others. By contrast, I can think of no occasion in which Moses successfully changes the minds of his charges. There are times he is angry and times he is placating, but there is never a dialogue. His dialogue is with the Almighty. We are back to that unique conversation between God and a Jew that will produce the Torah itself.

And He said, “Do not come any nearer; shed the shoes from your feet.
For the place you’re standing on his holy ground.” And He said,
“I am the God of your father—the God of Abraham, Isaac, and Jacob.”

The last we hear about Joseph is that he is placed in a coffin, an aron, in Egypt. Moses will be the one who takes this aron through the desert to re-inter it in Canaan. But Moses also is responsible for taking another box through the desert: the Ark (in Hebrew, also an aron) of the Covenant, which contains the word of God. And he will end his career as he began it, attending to the hostile world and listening to God’s word, not the people. Moses is nobody’s son and he is beholden to nobody.