A Look at Some of the Most Striking Haggadahs Ever Produced

A sumptuous new book collects 100 examples of decorated and illuminated haggadahs from across Europe, Israel, America, and beyond. 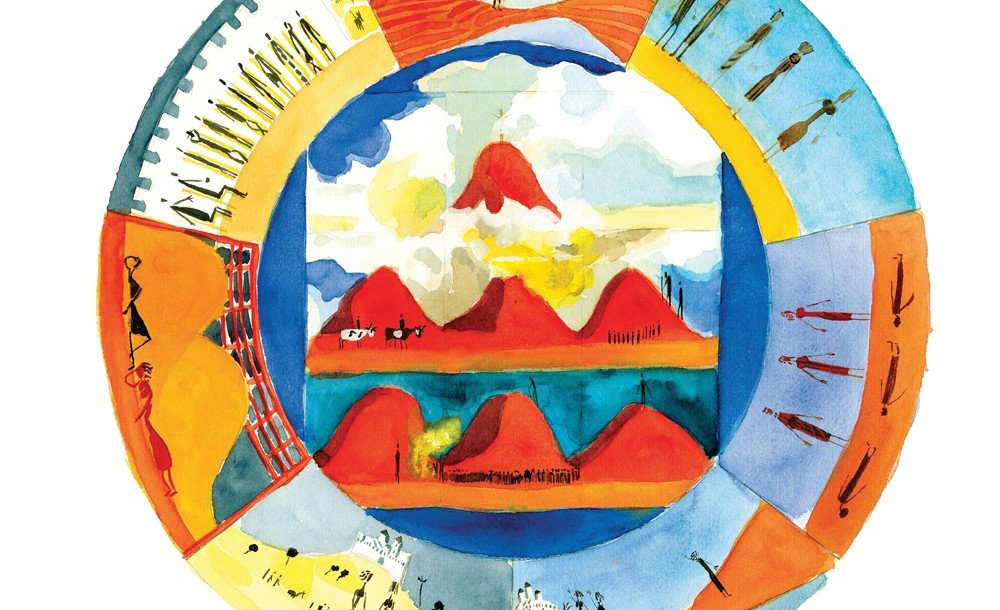 From the cover of Signs and Wonders: 100 Haggadah Masterpieces by Adam Cohen. The Toby Press.


Marc Michael Epstein is professor of religion and visual culture and director of Jewish studies at Vassar College. He is the author of, among other books, The Medieval Haggadah: Art, Narrative, and Religious Imagination (2011) and Skies of Parchment, Seas of Ink: Jewish Illuminated Manuscripts (2015).

Among the customs of the Passover seder is the practice, early on, of breaking the matzah that occupies the middle position in the ritual stack of three on the seder plate. As if the participants were slaves, unsure of when they will find their next meal, the larger of the two “halves” is hidden away, to be consumed after the meal, while the smaller piece is first raised and then put back in place but remains exposed while the account of the Exodus is recited.

And what a rich account it is. Still, it is a story told only in, as it were, chapter headings, a tantalizing potpourri of hints, suggestions, and allusions—pieces of a larger puzzle that, around many a table, provide launching pads for further rehashings and recountings that can and sometimes do extend late into the night. And when that happens, it is regarded, in the words of the haggadah, as “all the more praiseworthy.”

Which brings me to the bread that Adam Cohen offers up in Signs and Wonders: 100 Haggadah Masterpieces—a sumptuous new book, leavened with all manner of delights, that rises to the occasion of this most interactive of Jewish holidays. Picking up from where Yosef Hayyim Yerushalmi left off in his magisterial Haggadah and History, Cohen leads us on a visual journey through some of the most striking examples of decorated and illuminated haggadahs produced in Europe, Israel, America, and places farther afield ever since the dawn of the genre with the Griffins’ Head Haggadah (ca. 1300, also known as the Birds’ Head Haggadah) in what is now Germany.

Cohen’s work differs from that of Yerushalmi in that the latter focused exclusively on printed haggadahs held in the collections of Harvard University and the Jewish Theological Seminary of America. These are enormous resources, but the majority of wonderful manuscripts of the haggadah reside elsewhere in the libraries of the world. Frequently omitted from previous surveys of the genre, they are expertly curated here by Cohen, a bona-fide art historian (and a very good one at that) who knows both where to look and what to look for.

The fact that I myself would not judge every one of these 100 works to be a “masterpiece,” as promised in the book’s title, is clearly a matter of taste. But what can be said about Cohen’s selections is that they have been made not only on the basis of beauty or sophistication of design but also (and primarily, I think) on the basis of intrinsic interest. They hit a chord; each stands out aesthetically, or organizationally, or politically, or intellectually, or in one or more combinations of these. The art ranges from folksy to consummately sophisticated and elegant—and that is as it should be, representing as it does the diversity of the experience of Jewish visual culture.

The book’s layout is such that readers are typically confronted with two-page spreads, with, on the left-hand page, a block of explanatory text broken up by the enlarged image of a salient detail from the full-page illustration opposite. Cohen’s love of the material, like mine, sometimes makes it difficult for him to limit his elucidations to a single page, or even to a single detail. In the entry on the Griffins’ Head Haggadah, for instance, he chooses also to highlight a contemporary version of the medieval manuscript—in this case, a charming pop-up version created in 2006. Likewise, the discussion of the Barcelona Haggadah extends over several pages with disquisitions both on the work’s ostensibly realistic domestic scenes and on the phantasmagorical hybrid monsters that inhabit the margins. The astute observer will note that the “realistic” scenes contain some fanciful elements, while the “whimsical” margins can be read as commenting on realpolitik.

In brief, this book will not fail to entrance even those not especially interested in the history of the haggadah. To the contrary: it constantly charms with its revelations of little-known or little-considered examples and—even better—with its cogent insights into works we’ve all seen visually “quoted” time and time again. From the charming Bruegel-like detail of the two boys sneaking matzah hot from the oven in the Second Nuremberg Haggadah of 1450-75, to the amazingly intricate (and Orientalizing) details of the Bouton Haggadah (ca. 1870), to the Moss Haggadah’s “scientific” yet also quintessentially medieval reduction of ḥamets (leaven) to its DNA (1983), to the marriage of the literal, the abstract, and the symbolic in Barbara Wolff’s magnificent Rose Haggadah (2014), Cohen’s eye is consistently on the lookout for details that both surprise and edify.

A word about production values: Signs and Wonders has been beautifully, if a bit glossily, packaged by Koren, a Jerusalem publishing house that has justly earned a reputation for superlatively handsome books. The illustrations are true to color, and the highlighted details are not only appropriate but actually illuminating (no pun intended). Complementing Cohen’s consistently deft and engaging prose, the design and layout provide generous space without ever losing the images or the text in a sea of white. This is a volume that would be equally at home on the proverbial coffee table and in libraries, academic and popular. If I had my druthers, copies would be given at all life-cycle celebrations and provided to all Jewish community-center libraries.

But why should I, myself a scholar of the haggadah, be advocating the wide diffusion of a work that, while admittedly beautiful and certainly erudite, does not present a deep study of each and every example, complete with footnotes and bibliographical references? Answer: for the same reason that the smaller piece of the matzah is held up for the telling of the story of the Exodus. In just this way, Adam Cohen’s Signs and Wonders: 100 Haggadah Masterpieces, aside from its many intrinsic virtues, is a palate-teaser, an appetizer, an invitation to further delvings into art made by and for Jews.

Let all of you who are hungry, then, come and join the feast. And if the experience impels you, as no doubt it will, not only to expound further upon that story yourself but also to intensify your interest in Jewish art—well, that, too, is all the more praiseworthy. Besides, Passover is coming again in less than a year, and it’s never too soon to start getting ready.

A Look at Some of the Most Striking Haggadahs Ever Produced