On Holocaust Remembrance Day, We Should Also Recall Those Who Destroyed the Nazi Regime

Limiting observance to expressions of grief and mourning, failing to take account of the valor that defeated Hitler, is untrue to the full meaning of the day. 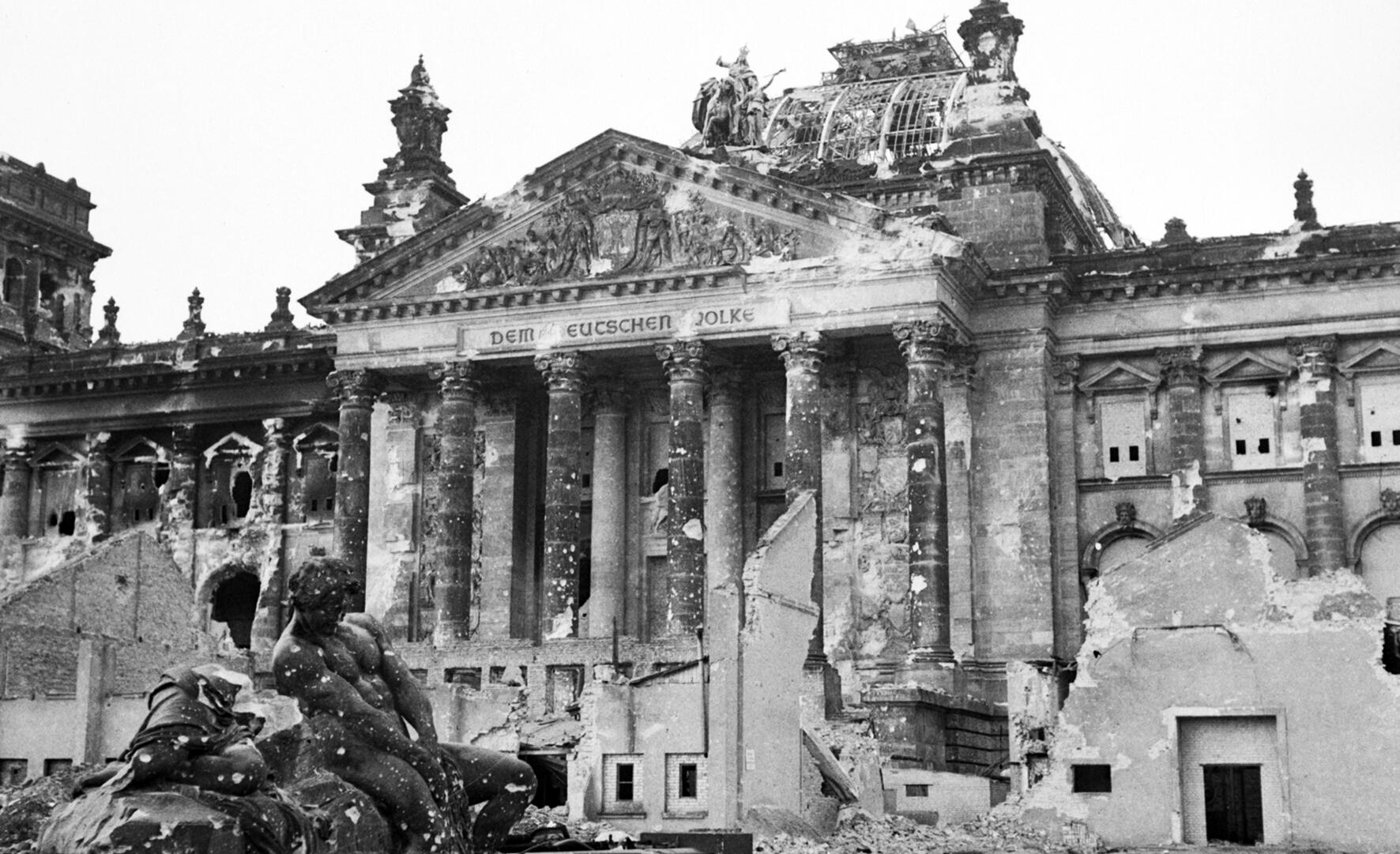 The Reichstag after the bombing of Berlin, June 1945. Wikipedia.


Michael W. Schwartz is of counsel to Wachtell, Lipton, Rosen & Katz and a former president of Congregation Or Zarua in New York City.

Today is Yom Hashoah, commonly known as Holocaust Remembrance Day. Increasingly, as this day approaches each year, my thoughts have turned to the biblical prophet Nahum.

Why Nahum? That’s a long story. As I wrote in an earlier essay in Mosaic, I believe his brief book, which predicts and celebrates the downfall of the Assyrian empire in the late-7th century BCE, has been wrongly neglected by Jewish tradition. Indeed, Nahum is obscure to the point of invisibility. No part of his book, itself a mere three chapters long, is ever read in the synagogue, or in Christian churches, and even theologians who recognize his high literary merit evince an acute discomfort with the content of his message.

And yet, there is much to be learned from Nahum. His eloquent, impassioned writing honors the divine attribute of vengeance. In expressing satisfaction and even joy at the downfall of those who destroyed the ancient northern kingdom of Israel and nearly succeeded in destroying the southern kingdom of Judah as well, the prophet rehearses the classical Jewish teaching that even a merciful and patient God will ultimately wreak powerful, unanswerable retribution upon the enemies of His chosen people. Nahum’s intense focus on an aspect of the divinity that seems dissonant to modern sensibilities reminds us that the Bible presents a God who is many-sided—and that “without this frightening side,” as one thoughtful reader of Nahum has written, “one could misread the portrait of the loving God as that of a passionless, doting, and undemanding dispenser of cheap grace.”

For these reasons, as I argued in my earlier article, I believe Nahum’s book should be rehabilitated and given a place in the order of Jewish worship. In my previous essay I proposed that that place should be in the liturgy for Yom Kippur afternoon, following the traditional reading of the book of Jonah. But now I’m convinced otherwise. Following a suggestion by my friend Johanna Kaplan, I think the time and place to read and learn from Nahum is in the observance of Yom Hashoah.

There is no fixed liturgy for Yom Hashoah. Over the decades since the Israeli Knesset established the day in 1951, it has been marked predominantly in a variety of secular forms: reading out the names of the murdered, participating in the youth-oriented “March of the Living” to Auschwitz and other Holocaust sites, observing the two minutes of silence held at 11:00 a.m. all over the land of Israel, and so forth. Attempts to create a specifically religious liturgy—like, for example, the Conservative movement’s initiative to propagate a “Holocaust Scroll” (Megillat Hashoah)—have been notably unsuccessful. To the extent that religious observance informs any part of the day, it lies in reciting the mourners’ kaddish and other solemn prayers.

As for the day’s secular observances, I have noticed one commonality among them: while we mourn the victims of the Nazi genocide, we do not mark the justly ignominious end of the victimizers and perpetrators, let alone rejoice and take comfort in the fact that these monsters lie in the dustbin of history while the Jewish people continues to grow and thrive. In particular, so far as I can determine, no observance of the day includes a celebration of the victory of the Allies in World War II—a victory that brought the Holocaust to an end, destroyed the Nazi regime, punished its infamous leaders with death, and wrought physical and economic devastation on Germany.

This omission strikes me as another grievous error, ignoring not only a crucial part of the history of the Holocaust itself but also a critical facet of the day’s specifically religious significance: the vindication in our own time of the traditional Jewish belief in the God who wreaks vengeance on the wicked, the same aspect of God glorified for all time in the book of Nahum.

Of course, that the Holocaust poses grave difficulties for religious faith, and for Jewish theology, is a major understatement. For many, the murder of millions makes a mockery of the claim that the Jews have a special place in God’s affections; for some, it has led to a loss of belief altogether. Even among the observant, the fact of the Holocaust inevitably complicates one’s relationship to the tradition and one’s understanding of God’s purposes. In that shadow, the absence of any consensus on a liturgy appropriate for the day comes to seem less surprising.

And yet, without claiming the prophet Nahum as an all-purpose remedy for this rightly unnerving condition, I persist in thinking that reading and studying his text, recalling the circumstances that led to its creation, and considering its lessons for our own time would greatly enrich the observance of Yom Hashoah.

How so? The book of Nahum reminds us that nearly three millennia before the Holocaust, the Jews came within a hairsbreadth of total destruction—and lived. The northern kingdom, representing ten of the twelve tribes, vanished from history; the southern kingdom avoided the same grisly fate only when the Assyrian army, on the brink of conquering Jerusalem, was forced by a deadly plague to abandon its nearly fatal siege of the city. And yet, less than a century after these devastating blows to his people, Nahum expressed unalloyed confidence that God would avenge the victims—as soon happened when Assyria fell first to the Babylonians and then to the Persians.

Thus, consideration of Nahum on Yom Hashoah would focus our attention not only on the dark significance of the day but on the fact that the Holocaust was ended short of achieving its full murderous goal and that its perpetrators were brought to ruin.

In this case, too, vengeance came about through a sequence of unpredictable and seemingly miraculous turning points marked by razor-thin margins of chance. These included Winston Churchill’s success in rallying the British War Cabinet during five days in May 1940 (recently depicted in the movie Darkest Hour); the massive feat of the Russian army and citizenry in resisting and repelling a three-million-man Nazi onslaught in June 1941—this, despite Joseph Stalin’s feckless dealings with Hitler, his murderous evisceration of the Red Army leadership, and his refusals to act on credible warnings that Hitler planned to invade; the fact that a few bombs out of the hundreds dropped by U.S. planes at Midway in June 1942 managed to find their targets and decimate the Japanese carrier fleet; the eleventh-hour deployment of a handful of very long range bombers by the RAF in April and May 1943 that won the “battle of the Atlantic,” enabling American supply shipments to reach Britain and the Continent; the turns in the weather that capriciously favored the Allies at Normandy in June 1944 and ultimately disfavored the Nazis at Bastogne in December of that year; and on and on.

In sum, as Richard Overy writes in Why the Allies Won, “It is hardly surprising that Churchill thought at the end of the war that Providence had brought the Allies through.”

Yes, assuredly, victory came too late to save the lives of millions of Jews. But it no less assuredly saved millions of others. A Nazi victory would have spread Hitlerian genocide across the entire Soviet Union and who knows how far beyond. The fate of the Jews of North Africa, the Levant, and Mandatory Palestine would have lain in the power of Hitler’s acolyte Amin al-Husseini, the grand mufti of Jerusalem. The words of George Orwell’s arch-inquisitor in 1984 come to mind: “If you want a picture of the future, imagine a boot stamping on a human face—forever.” Instead, those Russian and Middle Eastern Jews survived, and many wound up living in the reborn nation of Israel.

The full name given by the Knesset to Yom Hashoah was “Yom Hashoah v’Hagvurah.” The additional word, denoting courage or heroism, refers specifically to those Jews who (like the fighters in the April 1943 Warsaw Ghetto Uprising) participated in armed resistance against the Nazis. The full name is still in common use in Israel and is eminently worth recovering in the diaspora. In light of it, limiting observance of the day to expressions of grief and mourning, and failing to take account of the valor and might that achieved the downfall of the Nazis, is not really true to the purposes of the day’s creators. At the time, as it happens, there was serious opposition in Israel to the notion of setting aside a separate day in the Jewish calendar for memorializing the Shoah, precisely because doing so, by reinforcing what the historian Salo Baron referred to caustically as the “lachrymose theory of Jewish history,” could betray the moral messages of Zionism, of biblical teachings, and of Jewish history seen in the round.

Finally, there is this: in remembering the millions who perished, Nahum’s full-throated praise of the God who takes vengeance on the enemies of His people, written in the aftermath of an earlier historical disaster, offers its own priceless species of consolation. (Indeed, the name Nahum derives from the Hebrew root meaning to comfort or console.) Like the so-called precatory psalms that similarly celebrate the power of divine vengeance, the book of Nahum, expresses (in the approving words of a Catholic theologian) “a longing that evil, and evil people, may not have the last word in history.”

Surely, Yom Hashoah is an occasion when that longing should be given voice, and there is no more eloquent, assertive, and unforgettable voice, or one more directly addressed across the millennia to the monstrous architect of the Holocaust, than the voice of the prophet who wrote:

The Lord is a passionate avenging God, the Lord is vengeful and fierce in wrath. The Lord takes vengeance on His enemies, He rages against His foes. The Lord is slow to anger and of great forbearance, but the Lord will not acquit the wicked. . . .

Your shepherds slumber, O king of Assyria: your nobles lie inert: your people are scattered upon the mountains, and no man gathers them in. There is no healing for your injury, your wound is grievous: all that hear the report of you clap their hands over you. For upon whom has not your wickedness continually passed?

On Holocaust Remembrance Day, We Should Also Recall Those Who Destroyed the Nazi Regime