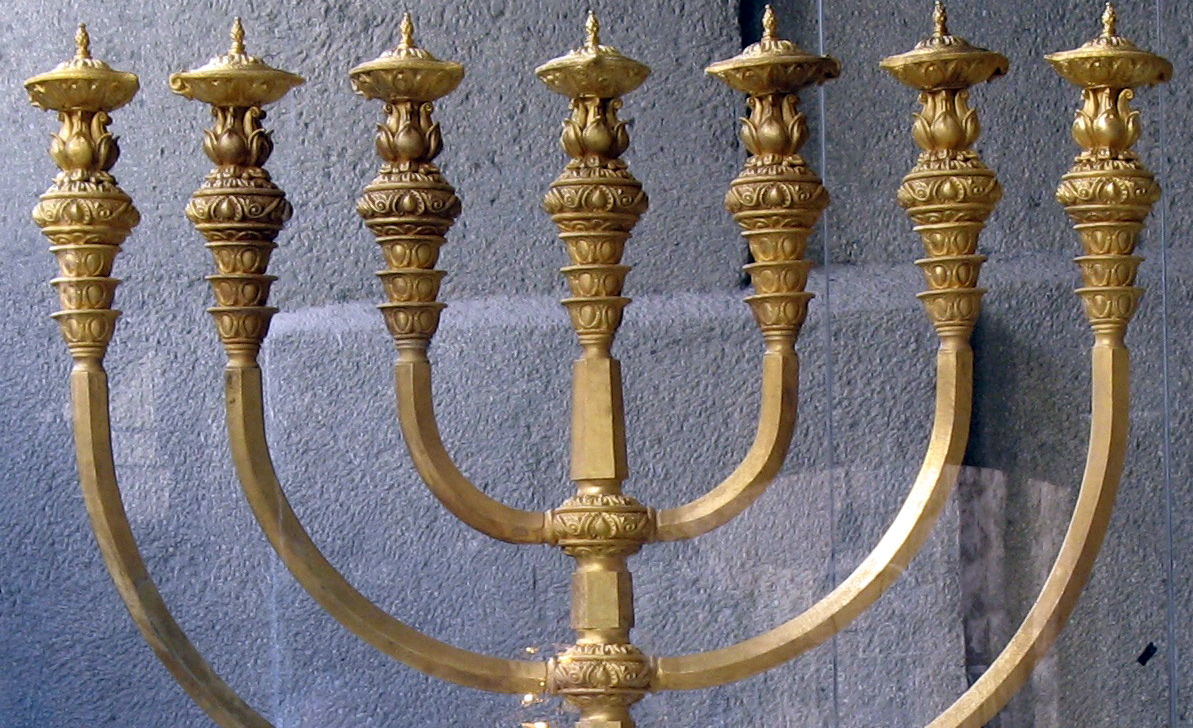 A replica of the original Temple menorah. Wikipedia.

At the beginning of this week’s Torah reading of B’ha’alotkha (Numbers 8-12), the Bible gives instructions for the daily kindling of the menorah.

The menorah has long occupied a prominent place in the Jewish imagination. From the time of its placement in the inner courtyard of the Tabernacle in the desert and later of the Temple in Jerusalem, to its rekindling after the Maccabees’ defeat of the Seleucids, to its central position on the Arch of Titus in Rome, to its modern repurposing as the emblem of Jewish revival by the state of Israel, few Jewish symbols have been as familiar or as evocative.

And yet the Bible leaves unstated the significance of the menorah and its seven branches, its importance to the Temple, or its meaning and purpose with respect to the relationship between God and His chosen nation and perhaps beyond. On these matters, an examination of five key scriptural passages can shed light.

We first learn about the menorah in Exodus 25, where God prescribes the crafting of the Tabernacle and all its accoutrements:

Most striking about these verses is their richly botanical imagery. Neither the image of the menorah on the Arch of Titus, nor that used on the seal of the state of Israel, nor menorahs used on Hanukkah (at least not any I have seen) come with this sort of floral detail. This aspect of the menorah’s design begins to make sense, however, in light of ancient rabbinic commentaries that connect the creation of the Tabernacle to God’s creation of the world in Genesis. Although, to my knowledge, the midrash does not point to this explicitly, it is hardly a stretch to see a garden lurking in the passage’s flowers and blossoms, bringing to mind in turn the Garden of Eden. If Adam and Eve were exiled from that garden because of their sins, the Tabernacle—and the menorah especially—suggests the possibility of recreating that garden and repairing the frayed relationship between humanity and God in a new sacred space (as many kabbalistic works indeed point out).

The second noteworthy element of the menorah’s design is its physical integrity and wholeness, which the text repeats for emphasis. Rather than fashioning the branches separately and then attaching them to the base, Moses is commanded to make the entire object from “a single hammered piece of pure gold,” beaten into the proper form. The midrash states that, unlike all of the Tabernacle’s other implements, the menorah was so difficult to produce according to specification that it emerged wholly formed from a heavenly fire.

Thus, whereas the Tabernacle represents the best of Israelite art channeled toward the service of God, the menorah suggests unified, untarnished, and unsullied nature—a prelapsarian state of purity to which the Tabernacle’s rites can, if not return us, at least reconnect us.

After another passing mention of the menorah in Exodus, the third substantive detail appears in Leviticus and concerns not its construction but its kindling, now emphasizing human rather than divine agency. While the Tabernacle, and consequently the Temple, is the domain of the priestly caste, the responsibility for providing the oil rests on the people as a whole: “The Lord spoke to Moses, saying: Command the children of Israel to bring you clear oil of crushed olives for lighting, for kindling an eternal lamp” (Lev. 24:1-2). This, the next verse states, is “a law for all time throughout the ages.” In fact, the word tamid, meaning “eternal,” “constant,” or “regularly,” appears no fewer than three times in this four-verse passage.

There is something particular, then, about this object that both requires national involvement and has a certain timelessness about it.

And that brings us to B’ha’alotkha and the fourth key passage. As in the previous three, the Torah here describes the aspect of the menorah most relevant to the theme of the surrounding chapters. While in Exodus the emphasis is on the menorah’s construction, and in Leviticus on the relevant procedures, in Numbers it is on its very first actual lighting, a procedure that serves as a capstone for the inauguration of the Tabernacle itself.

Yet the situating of these additional instructions in the biblical text is anomalous. They could have come earlier, for instance in Numbers 4-6 along with the discussion of other Tabernacle rites. Instead, they are wedged between the twelve-day inauguration ceremony and God’s command to purify the Levites, disconnected from any discussion of the Tabernacle’s operation.

But this positioning, too, seems to stress the menorah’s importance, making it the final step that must be taken before the Tabernacle—and the Jewish people—can leave the foot of Mount Sinai for their trek through the wilderness to the promised land. Perhaps the implication is that the menorah functions like a flashlight or beacon, lighting the way on the journey ahead until the Israelites arrive at the place where they will be charged with re-creating the sacred space of the Garden of Eden on a national level.

And then there is the fifth key passage about the menorah, which is not found in the Pentateuch at all but in the book of the prophet Zechariah, and which, appropriately, serves as this week’s haftarah (as well as that of the Sabbath that falls during Hanukkah). Set during the 6th century BCE, when the Persian emperor allowed a number of Jewish exiles to return to the Land of Israel and to rebuild their Temple, the book of Zechariah relates a number of the prophet’s visions anticipating the return to Jerusalem. One vividly features a golden menorah with seven lamps:

I see a lampstand all of gold, with a bowl above it. The lamps on it are seven in number, and the lamps above it have seven pipes; and by it are two olive trees, one on the right of the bowl and one on its left. (Zechariah 4:2-3)

Given the menorah’s importance, this vision is by no means difficult to decipher—yet Zechariah himself is not sure what to make of it:

“Do you not know what those things mean?” asked the angel who talked with [Zechariah]; and [Zechariah] said “No my lord.”

While the shape of the menorah is surely familiar, its significance eludes him, and he seeks God’s explanation. The answer: “‘Not by might, nor by power, but by My spirit’—said the Lord of Hosts.”

These words have come to signify many aspects of the Jewish people’s relationship to history and their sacred mission. The 11th-century exegete Rashi, in an interpretation that brings to mind the heavenly aspect of the menorah found in Exodus, understands “Not by might, nor by power” to mean: “just as the olives and the oil are complete by themselves in all respects, so you will not build My house by your [own] power or with your [own] strength.” In other words, olives grow on trees and olive oil, once squeezed out in a press, needs no further human preparation before it can be used as food or fuel; the human role is secondary. So, too, the menorah emerges complete from the gold ingot, or from the miraculous flame.

But human agency also looms large. The two olive trees that tower over the menorah symbolize, so the prophet learns, the two human emissaries: Zerubbabel, a descendant of David given political authority over the returnees, and the high priest Joshua who will assist in the return of Israel to its ancestral homeland. Just as the olive trees are planted, tended, and harvested by humans, who also coax the oil from their fruit, and just as even a menorah created by God must be lit by humans, redemption cannot come without some human agency. The presence of both trees—one representing worldly political leadership and the other spiritual, ritual leadership—harks back to Leviticus’ emphasis on the role of both nation and priests in the menorah’s lighting.

The angel also presents Zechariah with something not found anywhere else in scripture: an explicit explanation, albeit a partial one, of the menorah’s symbolism: “Those seven [branches] are the eyes of the Lord, ranging over the whole earth.” God’s sovereignty applies not just in the land of Israel, but even in exile—as evidenced by His ability to bring His people back to their land. Furthermore, the building of the Temple in Jerusalem, the return to a sacred space, will be a process initiated and accelerated by God’s chosen nation but also a product of natural and divinely inspired forces meant to redeem all of humanity.

The menorah thus symbolizes the meeting point of nature, human autonomy, and the power of God, the whole lighting the way toward the fulfillment of human potential throughout God’s world. In light of these associations, it is more than fitting for the menorah to grace the coat of arms of a nascent state of Israel.

And in this connection a final aspect of the menorah bears emphasizing. As we saw earlier, Exodus states that the menorah will be lit “as a law for all time throughout the ages.” The midrash on our parashah of B’ha’alotkha elaborates this thought:

The sacrifices are brought only so long as the Temple stands; the lamps, however, are forever before the menorah. And none of the blessings which I have given you to bless My children will ever be nullified.

Nearly every other Tabernacle fixture is specific to Temple worship. But the function of the menorah does not cease when the Jewish people no longer possess a Temple. In fact, its role as a spiritual beacon may become even more important.

In sum: the menorah is a permanent symbol of a multitude of things pertinent to the health and welfare of the Jewish people. It is a sign of the presence of light during their long years in the wilderness, and simultaneously of a better future in the promised land with the accompanying potential of a return to communion with God. It is an element of the priestly service in which not just the priests but the entire people have a role to play. And analogously it represents the need for human in addition to divine agency in the progress toward redemption.

Indeed, as Gershom Scholem has noted, it may very well be not the ubiquitous Star of David but the menorah that rightly holds the crown as the most enduring of all Jewish symbols.