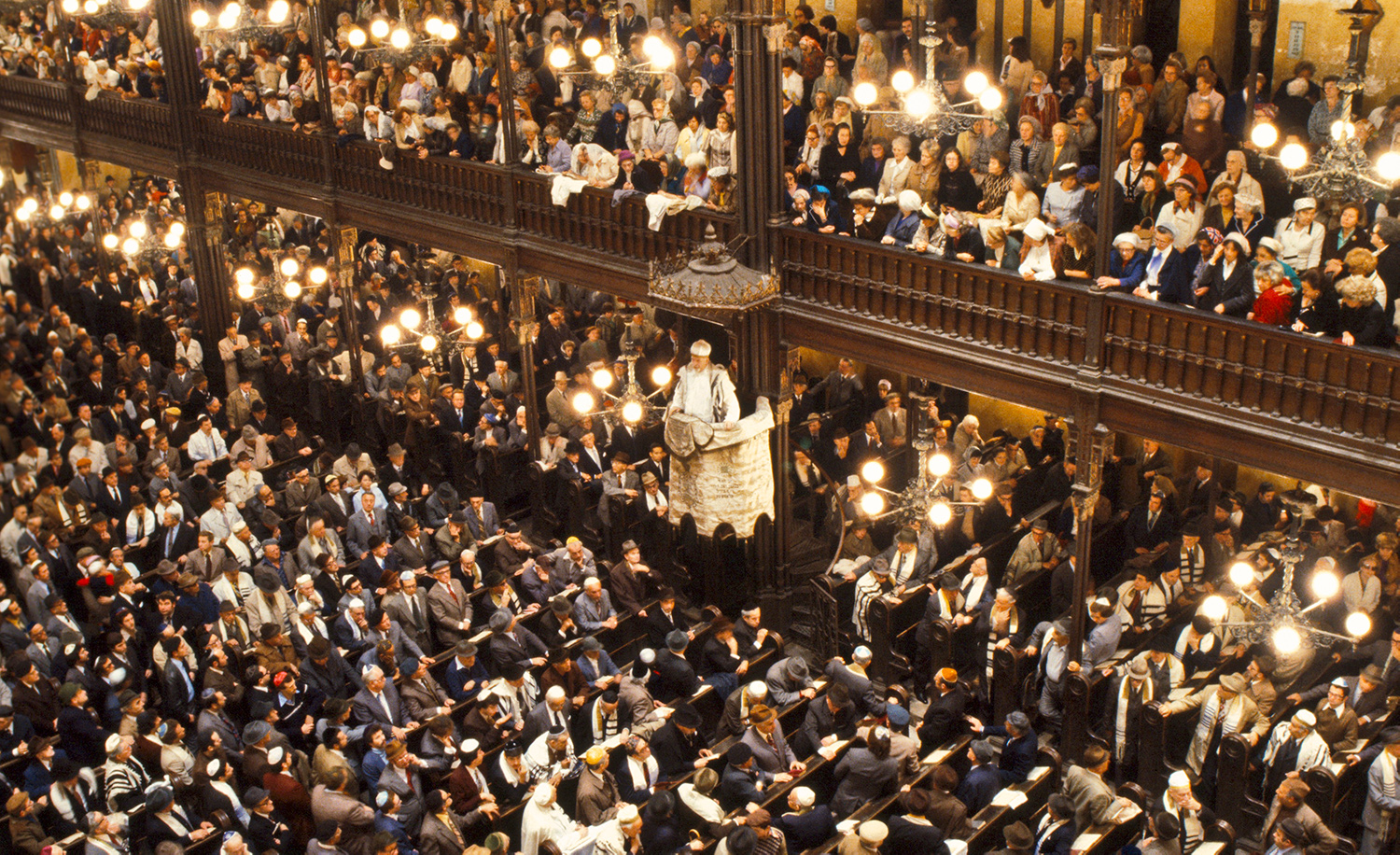 In many Ashkenazi synagogues, the concluding portions of the Sabbath morning service include the rhymed poem An’im Zmirot, known formally as “The Song of Glory,” a work distinguished by its ornate Hebrew and its shocking anthropomorphism.

The song’s theological nub derives from a uniquely explicit description in Exodus 33 of an encounter between man and the Almighty; in it, Moses asks God to show Himself to him, and the Lord obliges. This revelation occurs after the Lord—although He’s forgiven the sin of the golden calf—decides He needs some space from the constantly backsliding rabble He’s taken out of Egypt. He therefore declares that He will withdraw His presence from the Israelites and instead send an angel to travel with them to the promised land. But Moses starts to argue with Him about this, bringing us to the crux of the matter, which is also the crux of this song: how much of God can human beings actually touch?

Moses insists to the Lord that if His panim—a word usually translated as “presence” in this particular passage—won’t travel with the Israelites, then He will have ceased to treat them as His chosen people. On the other hand, were He to accompany them, then they would indeed be unlike any other people on the planet. The Lord grudgingly acquiesces. It is then that Moses asks to see God’s glory, and a conversation ensues about whether he can really be allowed to see the Lord’s panim, rendered here in its usual meaning of “face.”

There is much theological complexity packed into this passage. First, since God has no body (at least according to most Jewish theologians), He cannot have a face. Second, in the Pentateuch it is typically the Lord who drives the hard bargain, imposing a host of regulations, strictures, and demands upon His people if they are to fulfill their goal of becoming “a nation of priests.” But here we see the roles reversed: Moses is asking for greater intimacy, and the responsibility that comes along with it, and the Lord is resisting. It’s not that He wants an open relationship or to see other nations; He’s just not ready to move in.

Moses will have none of it. These are Your people, he insists; if You don’t want to move in—“to dwell among them”—let’s call the whole thing off. And then the business of the face comes to a point:

And [Moses] said: Please show me Your glory.
But He said: I will pass the best of Me over your face
And I will call the name of the Lord before your face.
But I will favor whomever I will favor and I will absolve whomever I’ll absolve.
And He said: You’re not able to see My face. Because a man won’t see Me and live.
Then the Lord said, Here’s a place with Me. But you stand still on the rock.
And so when My glory passes by, I’ll put you in the crevice of the rock
And cup My hand over you till I pass by,
And I’ll remove My hand and you shall see My back, but My face cannot be seen.

So the Lord has no face that you can see, but He has a hand? How exactly does this incorporeality work? How you can get to know a God like this is the question Moses asks, and it is the question that An’im Zmirot grapples with. Or, more precisely, it asks: “Is that as close as we can get?”

With this scriptural backdrop in mind, we can now turn to the song itself.

The poem is attributed to Rabbi Judah the Pious (1150-1217), who as a young man was better known for playing with a bow and arrow than for studying, but who nevertheless developed into a renowned religious teacher. This particular attribution to him strikes to the heart of our question because, as the historian Ephraim Urbach notes,

One of the main innovations in the theory of divinity of Judah the Pious is an approach according to which the glory that is revealed to man is not the Creator but rather the first of all created things, for the Creator cannot be known by the prophet, because He is infinite and has no appearance.

Thus the song, whose Hebrew couplets proceed in alphabetical order, opens with a sort of apologia, or seeking-of-permission, for describing God at all:

I’ll sweeten my songs and plait my tune
Because for You my being’s long yearned.
My being desires the shadow of Your hand
To know every riddle of Your secret heart.
Even as I speak in Your regard
My heart overflows for Your warmth.
Therefore I’ll speak of You with respect
And honor Your name with songs from the heart.
I’ll tell Your glory although I’ve never seen You,
I’ll liken and describe You although I’ve not known You.
In Your prophets’ hands and Your servants’ counsel
You’ve given form to the glory of Your mantle.
Your greatness and might have lent fame to Your acts.
The prophets imagined You not as You are, comparing You with Your deeds.
They’ve made parables of You in many a vision;
You are One in all imaginations.
They see You as both young and old
And Your head’s hair both white and gold.

From here the poem goes on to describe various physical attributes until we get to this couplet, which is the key to the rest:

He showed the back of His head to the humblest of men
When he wanted to see the Lord’s image before his face.

The Hebrew, drawing on a famous passage from the talmudic tractate of Brakhot, says that what the Lord showed Moses (“the humblest man on earth,” Numbers 12:3) was the back knot of His t’filin, the twin set of phylacteries, worn in daily prayer, that are fastened with leather straps, one on the head (as here) and the other on the hand and arm.

It’s worth pausing here to note that the great halakhic scholar Rabbi Joel Sirkis (1561-1640) quotes this very couplet to justify the recitation of An’im Zmirot—a composition that many other rabbinic authorities rejected outright for its anthropomorphism—not just once a week but daily:

I am told that the sages of old appointed the Song of Glory to be said every day, . . . because it contains the teaching: “The knot of His t’filin He showed the humble one. . . .”

In other words, Sirkis believes, first, that this one verse makes the whole poem worth reciting and, second, that if God Himself dons t’filin every day, obviously we humans should recite the song with equal frequency. By contrast, other admirers of the song argued that frequent recitation cheapened the song’s sublimity. Thus, another Polish halakhist, Rabbi Mordechai Yaffe (1530-1612), wrote:

It appears to me you should not say [An’im Zmirot] every day, not because of its defects—heaven forfend!—but because of its graces. [Instead], it should be said . . . at intervals, such as on the Sabbath and festivals, . . . because it is not the righteous way to recount the great praises of even a king of flesh and blood daily [lest it detract from his royal greatness].

Traditionally, to add to this sense of the song’s holiness, the synagogue ark containing the scrolls of the Torah is opened for its recital and closed immediately afterward—a task I’ve often been assigned to perform and have found demanding since I can rarely remember the song without a prayer book in my hand.

Here is how the song ends:

Let the many lay my songs upon You
And let my jubilation throng You.
May my praise be a diadem for Your brow
And my prayer be an incense cloud,
May the pauper’s offering be precious in your eyes,
As a song that was sung over offerings raised high.
May my blessing arise to the Provider’s head,
Who performs and gives birth, righteous and great.
And to my blessing may You nod,
And take for Yourself the sweet savor’s scent.
May my speech be sweet to You
For my being longs for You.

Here the poet implies, and more than implies, that he intends his song not as an esoteric prayer for mystics alone but as something recited publicly by the masses. And this leads us to another peculiarity: in most congregations where it is recited, the singing is led by a child. As each verse of the song’s couplets itself contains two rhymed half-lines, the whole lends itself to responsive reading; the child sings one verse, the congregation the next to complete the couplet, and so forth.

Does it not seem odd that a poem at once so suggestive and so abstruse—standing by the open ark, I’m often not entirely sure that I understand what I’m singing—should be put into the mouth of a child? In his commentary on the liturgy, the late Rabbi Issachar Jacobson answers that a child leads the song because of his innocence:

One may assume that aside from the desire to involve children actively in the service, there is here a consideration that this deep piece, which has so much longing for closeness to the divine presence in it, should be said by “those who have yet to sin.”

That is a profound thought—to which I’d add that, because the song is sung in call-and-response mode, it becomes a dialogue between “those yet to sin” and precisely that same community of sinners among whom the Lord refused to keep His abode all those centuries ago in the desert. So the innocence of the child isn’t really the crux of the matter. Rather, this song, which in its own way is quite a knowing work of art, makes a striking contribution to the perennial struggle with the question we began with: what is the Lord’s physical reality, and how can we poor fleshly creatures approach it?

I think we sing this song in this way because we’re supposed to see His presence in that child leading us. We don’t have Moses’ clarity of vision; we don’t even have the holy tabernacle in our midst. Seeing your child leading a declaration of faith at the place of your choosing is as much of the infinite as you’re going to get. So the psalmist describes the reward of a righteous man (128:6): “See sons born to your sons, peace upon Israel.” The child calling to the community and bidding them respond is as close to God as we will ever come this side of the grave.