In his rendering of the banishment of Ishmael, the Torah reading for Rosh Hashanah, Rembrandt reminds us of the bond between Jews and humanity at large. 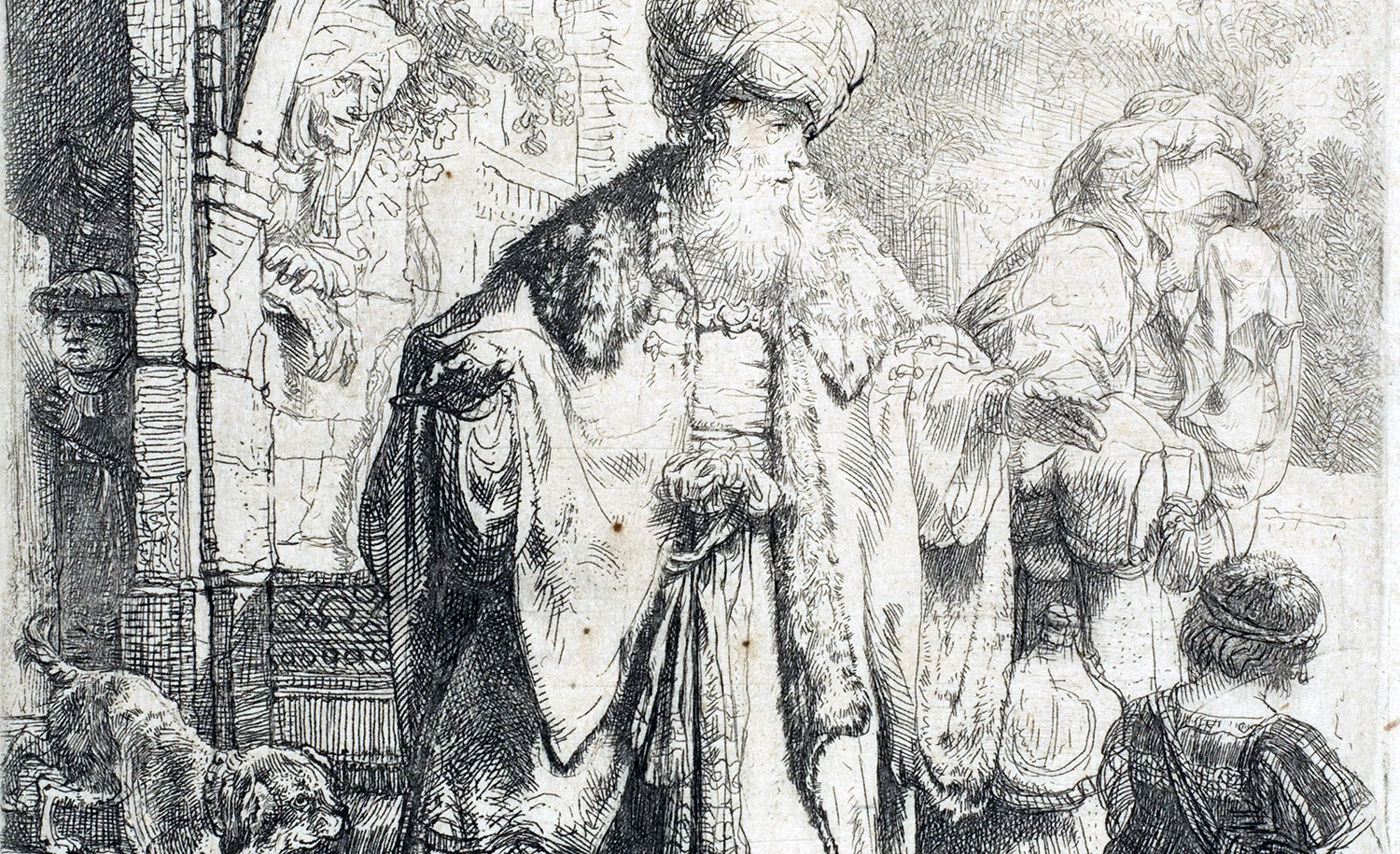 From Abraham Casting out Hagar and Ishmael, Rembrandt, etching with touches of drypoint, 1637. Met Museum.

For Rembrandt enthusiasts, few experiences are as exciting as visiting the great artist’s home in Amsterdam. Bought in the flush of youthful success, it was later relinquished when Rembrandt found himself on the brink of bankruptcy; the building is thus an emblem both of his earthly ups and downs and of his enduring fame.

Today the home functions as a museum. The art displayed in the former living room and bedroom is largely the work not of Rembrandt but of other, mainly contemporary Dutch artists. One painting, by Jan Pynas, is The Expulsion of Hagar, a subject of much interest to artists in Holland; a version of the same scene created by Rembrandt’s own teacher, Pieter Lastman, hangs in the Kunsthalle in Vienna.

The story depicted by these artists is told in Genesis 21, in a passage read publicly in synagogues all over the world on the first day of Rosh Hashanah. Following the miraculous birth of her son Isaac, the elderly Sarah has decided that Abraham’s firstborn child Ishmael must be expelled from the household with his mother Hagar. Abraham is aghast, but is ordered by the Almighty to comply:

And Sarah saw the son of Hagar the Egyptian, whom she had borne unto Abraham, making sport. Wherefore she said unto Abraham: “Cast out this bondwoman and her son; for the son of this bondwoman shall not be heir with my son, even with Isaac.” And the thing was very grievous in Abraham’s sight on account of his son. And God said unto Abraham: “Let it not be grievous in thy sight because of the lad, and because of thy bondwoman; in all that Sarah saith unto thee, hearken unto her voice; for in Isaac shall seed be called to thee. And also of the son of the bondwoman will I make a nation, because he is thy seed.” And Abraham arose early in the morning, and took bread and a bottle of water, and gave it unto Hagar, putting it on her shoulder, and the child, and sent her away; and she departed, and strayed in the wilderness of Beersheba. [21:9-14]

Visitors to Rembrandt’s home ultimately ascend to the top floor, devoted to a gallery of the great artist’s etchings and prints. Among these is a 1637 etching of this very scene of the banishment of Hagar and Ishmael. Much smaller than a painting—a scant five inches high by three-and-three-quarters inches wide—it features all of the central characters and more. Abraham is depicted ruefully ushering the weeping Hagar from the house; young Ishmael, dressed in finery, is standing with his back to the viewer, leaving his facial expression only to be guessed at; Sarah, watching from the window, sneers, unperturbed by her rival’s sobs. A dog emerges from the doorway, perhaps a symbol of the home Hagar leaves behind.

It is a scene painted by many an artist, but, as is so often the case with Rembrandt, it includes an element found nowhere else and easily overlooked by the casual viewer. The door to Abraham’s home stands slightly ajar, just wide enough for the dog to pass through—and to reveal, peering out from the shadowy interior, the figure of a small boy.

It is Isaac, a child who—assuming the expulsion of Hagar and Ishmael takes place, as Genesis seems to imply, immediately after he has been weaned—can be no more than three or four years old. He stands, squinting slightly, with an expression on his face the very opposite of his mother Sarah’s; he looks utterly forlorn.

That the tale of Abraham, Sarah, Hagar, and Ishmael has attracted so much artistic interest is hardly surprising. The dramatic potential is obvious: a banished concubine, a matriarch suffused with hatred for a rival, a father torn between two of his children but ordered by the Almighty to banish his firstborn.

Many artists have pondered and tried to capture what is going through Abraham’s mind, or Hagar’s, or Sarah’s, or even Ishmael’s. That Rembrandt has taken pains not only to place Isaac in the story but to imbue him with a specific emotion is noteworthy in itself. Moreover, while choosing to show us the face of Isaac, he has deliberately occluded the face of his brother Ishmael—as if there is no need to guess his feelings, let alone to depict them, as we know all too well what they must be. By this double move, Rembrandt raises a question that seems to have occurred to no one else: what is it to see your older brother, whom you have known since birth, expelled from your home never to return, and to sense that he is being banished because of you?

In staging this scene, Rembrandt provokes us into considering the relationship between the two boys. We are informed by the Bible of Ishmael’s transgression, the fact that he was “making sport” and thereby incited Sarah’s demand that he and his mother be sent away. The term in Hebrew, m’tsaḥek, is ambiguous, and it is not clear what precise sin it connotes. The Midrash assumes that it refers to an unforgivable act like idolatry. This may indeed be so, yet the text could simply mean that Ishmael was engaged either in mockery or in some lewd form of adolescent behavior that prefigured his career as a “pere’ adam,” a wild or unchecked individual, to cite the prophetic words of God’s angel to the pregnant Hagar (Genesis 16:11-12).

Read this way, Ishmael is indeed an inappropriate influence on Isaac but not egregiously evil. Perhaps that is why his banishment seems so wrong to Abraham. In correcting him by insisting that “in Isaac shall seed be called to thee,” God reminds the patriarch not only that Isaac will inherit his estate but also that Isaac is the sole appointed carrier of his mission. For the future of the covenant, there is no other way: Ishmael must be banished.

Which does not mitigate, for us or evidently for Rembrandt, the intense pain that this sudden parting from his older brother, reprobate or not, must have caused the child Isaac. In speculating how the artist might have been led to his unique visualization of the scene, it is useful to bear in mind his close attention in general to the biblical text. For, later in Genesis, the two siblings are suddenly brought together again, and on a no less momentous occasion:

And Abraham expired, and died in a good old age, an old man, and full of years; and was gathered to his people. And Isaac and Ishmael his sons buried him in the cave of Machpelah, in the field of Ephron the son of Zohar the Hittite, which is before Mamre, the field which Abraham purchased of the children of Heth; there was Abraham buried, and Sarah his wife. [Genesis 25:8-11]

Why is Ishmael there? How did he even know that Abraham had died? Isaac, we know, is Abraham’s sole and official heir, and in the fullness of time he alone will be buried in the cave of Machpelah adjacent to his father. Moreover, we’ve learned by now that Abraham has had several more children by a third woman, who, unlike Hagar, is an actual wife to the patriarch. Yet none of these other children is present at Abraham’s burial. Ishmael’s standing in the family is certainly no stronger than theirs—so what would he be doing at this ceremony had Isaac not wished him to be there, welcomed as a true child of Abraham?

In short, it seems possible that the connection between Isaac and Ishmael was never fully broken. Ishmael the dangerous influence was removed, and the brothers’ separate paths, mandated by the Almighty, were maintained; but not only, perhaps, did little if any enmity exist between them, but they might well have been tied by a bond going all the way back to childhood. Such, at any rate, is the reading hinted at by Rembrandt in this etching.

Rembrandt’s choices, finally, also offer insight into why this story is read on Rosh Hashanah.

It is a fascinating fact that the liturgy of what is commonly referred to as the Jewish New Year has so little to do with the Jews. Instead, the prayers on these days abound in invocations of God as creator and ruler of all existence, of humanity standing before Him in judgment, and of humankind’s mortality and God’s eternal nature. And there is a reason for this: rightly understood, Rosh Hashanah is not the Jewish new year at all; instead, the Jewish calendar marks two separate new years.

With the month of Nisan and the festival of Passover in the spring, Jews commemorate the exodus from Egypt and the birth of the Jewish people; this is actually the Jewish new year. Six months later, in Tishrei, Rosh Hashanah commemorates God’s far-earlier creation of the universe, and it is therefore on that day, every year, that the world stands in judgment, and that prayers focus not so much on Israel as on all mankind.

The calendar thus reveals a dialectic that lies at the heart of Jewish identity. To be a Jew is to be what the first Jew, Abraham, was: at once “a stranger and a neighbor” in the world, simultaneously a part of, and apart from, humanity as a whole.

With this in mind, one can better appreciate why the main Torah reading on the first day of Rosh Hashanah centers less on the ancestors of the Jewish people than on Ishmael, and not only on Ishmael’s banishment but also on God’s mercy to him in the desert. A story about Israel’s covenantal apartness captures in the same breath Israel’s ineluctable connectedness.

On Rosh Hashanah, indeed, Jews have always invoked the bond between them and the rest of humanity. No matter how persecuted over the centuries, they have prayed for that bond to grow closer, for the moment when yei’asu khulam agudah aḥat, when “all humankind will form one brotherhood,” in the sense not of all becoming Jews but of all recognizing the truth of Abraham’s creed.

In reciting these prayers every year during the High Holy Day period, Jews have been, curiously, not unlike that little boy peering out of the doorway in our etching, at once called to their destiny as a “nation that dwells alone” and pained by human separateness and disunity, longing for the day “when God will be one and His name one.”

Of this, too, Rembrandt’s genius reminds us.