Where Do the Names of the Shofar Calls Come From?

At least one of them might stem from the days when Jews ululated. 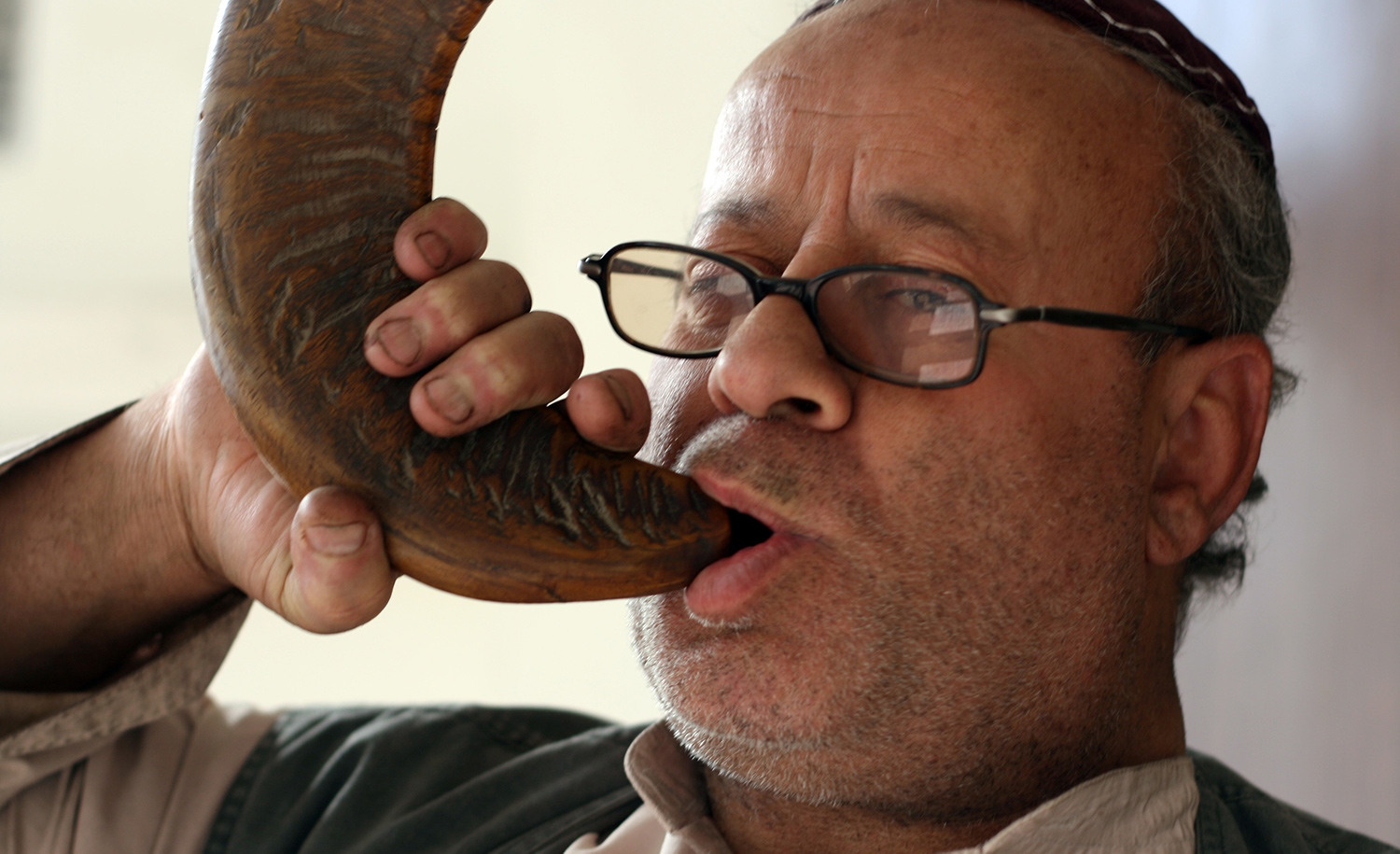 Afghanistan’s only known Jew, Zebulon Simantov, blowing a shofar in his home in Kabul. Getty Images.

The words for Rosh Hashanah’s three shofar calls—the t’ki’ah, the sh’varim, and the tru’ah—are all ancient. Where do they and the sounds denoted by them come from?

The t’ki’ah, linguistically and acoustically, is the simplest. The biblical verb taka’, followed by the preposition b’, means to play or blow into a wind instrument, and a t’ki’ah is a single long breath blown into the shofar, usually lasting three or four seconds and ending on an emphatic note. Unlike the noun, the verb occurs in many places in the Bible, in which blowing one or more blasts on a ram’s horn or trumpet sounds an alert or signals a solemn occasion.

Such blasts were associated by the rabbis with Rosh Hashanah because of the verse in the book of Psalms, “Blow ye [tik’u] the shofar at the time of the new moon, at its covering [ba-keseh] on our feast day.” Since Rosh Hashanah is the only major biblical holiday to fall at the beginning of the lunar month, when the barely visible or invisible moon is “covered,” this verse was taken to refer to it, and every sequence of shofar calls in the Rosh Hashanah service starts and ends with a t’ki’ah.

Sh’varim, next, is the plural of the biblical noun shever, which comes from the verb shavar, to break or fracture, and it means “fractures.” In this plural form, it is a rabbinic word not found in the Bible, and the shofar call it designates, consisting of three short pairs of equal notes, may have originated in rabbinic times as well. One might represent it as ah-ah, ah-ah, ah-ah, and it was compared by the rabbis with sobs or groans. It may owe its name to this comparison no less than to its “fractured” sound, because the word shever in the Bible can signify a state of broken-heartedness or devastation.

But it’s tru’ah that’s the most interesting. The word is related to the verb heyri’a, and both noun and verb occur many times in the Bible, where they can refer to a cheer, battle cry, military command, or outburst of jubilation. Thus, we have verses like 1Samuel 10:24, “And all the people cheered [va-yari’u kol ha’am] and said, ‘Long live the king!’”; 1Samuel 1:52, “And the men of Israel and of Judah arose and cried [va-yari’u] and pursued the Philistines”; Numbers 10:5, “And ye shall blow a command [tru’ah] and the eastward camp shall move forward”; and Psalms 33:3, “Sing unto Him a new song, play the tru’ah well.”

A biblical tru’ah can be produced either by the human voice or by a wind instrument. In Rosh Hashanah services in Jewish communities all over the world, it is sounded as a series of rapid staccato blasts, generally nine in number, all having the same pitch, although the last is sometimes slightly higher: tuh-tuh-tuh-tuh-tuh-tuh-tuh-tuh-tuh! (In Sephardi synagogues, the staccato form can be replaced by a gentle and wavelike legato.)

Curiously, however, there are a few places in the Bible where the same verb and noun can indicate a wail, dirge, or lament, or the sounding of one. Thus, we have Micah 4:9, “Now why dost thou [Jerusalem] cry aloud [tari’i re’a] . . . for pangs have taken thee like a woman in travail,” and Jeremiah 20:15-16, “Cursed be the man who brought tidings to my father saying, ‘A man child is born unto thee;’ . . . let him hear the cry of pain in the morning and the lament [tru’ah] in the afternoon.” Is this tru’ah a different sound from the tru’ah of battle and rejoicing? But why, if it is, should the same word be used for it?

In the Bible, the connection between the tru’ah and Rosh Hashanah is explicit. Thus, in Numbers 29:1, the Israelites in the desert are told, “In the seventh month, on the first day of the month, ye shall have a day of holy convocation. No work shall ye do on it; it shall be a day of tru’ah to you.” The seventh month is Tishrei, the first month of the year in biblical times having been Nisan, the month of Passover. Only later was the counting of the months shifted to begin with Tishrei, at which point the “holy convocation” of the seventh month decreed by the Bible became the rabbinic rosh ha-shanah, “the start of the [new] year.”

Yet the rabbis had a problem with the tru’ah of Rosh Hashanah, because they weren’t sure what the right sound for it was. The question is discussed in the talmudic tractate of Rosh Hashanah in a passage that begins:

In Caesarea [of whose academy he was rector in the early 4th century CE], Rabbi Abbahu established the order of the shofar calls as follows: t’ki’ah, three sh’varim, tru’ah, and [a second] t’ki’ah. What was his reasoning? If [the middle shofar call] is supposed to sound like a y’lalah, he should have made the order t’ki’ah, tru’ah, t’ki’ah. And if it’s supposed to sound like a g’niḥah, he should have made it t’ki’ah, three sh’varim, t’ki’ah. . . . What did Rabbi Abbahu do? In case it’s a g’niḥah, he included it. And in case it’s a y’lalah, he included it as well.

What is the issue here? Normally, we are given to understand by this passage, a tru’ah is a y’lalah—a word whose meaning I’ll get to in a moment. On Rosh Hashanah, however, on which the shofar is meant to sound not a cheer or battle cry but a call to repentance, some rabbis thought that it should resemble a g’niḥah, a sob or moan, caused by the thought of one’s sins and the punishment they deserve. Since such an expression of emotion is better represented by a sh’varim, they ruled that this is what the shofar call following the t’ki’ah should be. Yet, since no one was certain if such a ruling was correct, Rabbi Abbahu ordered that both the g’niḥah and the y’lalah be sounded and that the shofar-blowing begin with the sequence t’ki’ah, sh’varim, tru’ah, t’ki’ah. Jews in the end settled on a three-way compromise, alternating among using just truah, using just sh’varim, and—following Rabbi Abbahu—using a single shofar call known as sh’varim-tru’ah.

But what exactly is a y’lalah? In modern Hebrew this noun means a wail or a howl, which is how its two appearances in the Bible have been traditionally translated. There are many more occurrences in the Bible of its associated verb heylil, whose meaning is also to wail with grief, as in Jeremiah 4:8, “For this, dress in sackcloth and mourn and wail [heylilu].” And yet if this is a y’lalah, and if a tru’ah is also a y’lalah, two questions arise. The first: how can a sound that is a cheer, battle cry, or cry of jubilation also be a wail? The second: if a tru’ah sounded like a wail of grief, why did those rabbis who sought to substitute a sh’varim for it not consider it an appropriate expression of contrition?

Permit me to propose an answer to these two questions—and if, in the vast body of biblical scholarship with which I’m not familiar, the same answer has already been given, you’ll forgive me for reinventing the wheel.

In biblical and rabbinic times, I would suggest, a y’lalah was a ululation—and if it was, so was a tru’ah.

Ululating is a practice common throughout the Arab Middle East to this day, as well as in parts of Africa and western Asia to which it has spread. (It also may have existed in ancient Greece. Our English “ululation” comes from the onomatopoeic Latin ululatus, which derives in turn from Greek olulugé.) Performed in Arab society mostly by women, though sometimes by men, too, ululations are produced by a rapid flapping of the tongue against the roof or side of the mouth, with the la-la-la-la-la-la-la-la-la projected in a shrill, high-pitched voice. It’s hard to do without training, but you can make a reasonable imitation of it by breathing out in a high tone while quickly covering and uncovering your mouth with your hand.

Emotionally powerful, ululations are most often heard at celebrations, but they also are performed at funerals and sorrowful occasions and traditionally accompanied men into battle; the difference between their use in different situations is one of minor modulations. And, most relevantly for our discussion, their sound, making allowances for the transposition from human vocal chords to a ram’s horn, is almost exactly the same as that of the tru’ah of the shofar. If you don’t care to take my word for it, there are YouTube recordings of both ululations and shofar calls that can be listened to.

Jews in the ancient Middle East must have ululated, too. (Indeed, Jewish women from Arab countries still sometimes ululate both in Israel and in the diaspora, and can be heard doing it at weddings, circumcisions, bar mitzvahs, and the like.) The sound of the word y’lalah itself strongly suggests that it once meant a ululation, especially since it has cognates in other Semitic languages, such as Arabic wulul and Amharic ulilta, which have the same meaning. And if a y’lalah was a ululation, the tru’ah, the cheer and battle cry of ancient Israel, must have been one as well, whether voiced or played on an instrument. The ancient Israelites certainly didn’t shout “Yay!” when sounding a cheer, or “Hurrah!” when charging an enemy.

It may be that y’lalah was the biblical word for a lamenting ululation, and that tru’ah generally (although not always, as we have seen) denoted a martial or celebratory one. And if this theory is correct, it answers our two questions. In the form of a ululation, an intended wail might also be interpreted as a cheer, a battle cry, or a cry of jubilation—and while some ancient rabbis thought this was how the shofar should be sounded on Rosh Hashanah after the opening t’ki’ah, others were of the opinion that so ambiguous a sound was inappropriate and should be replaced by a sh’varim.

And so Rabbi Abbahu, seeking to make peace between the two camps, came up with the sh’varim-tru’ah that is in use to this day.

Where Do the Names of the Shofar Calls Come From?