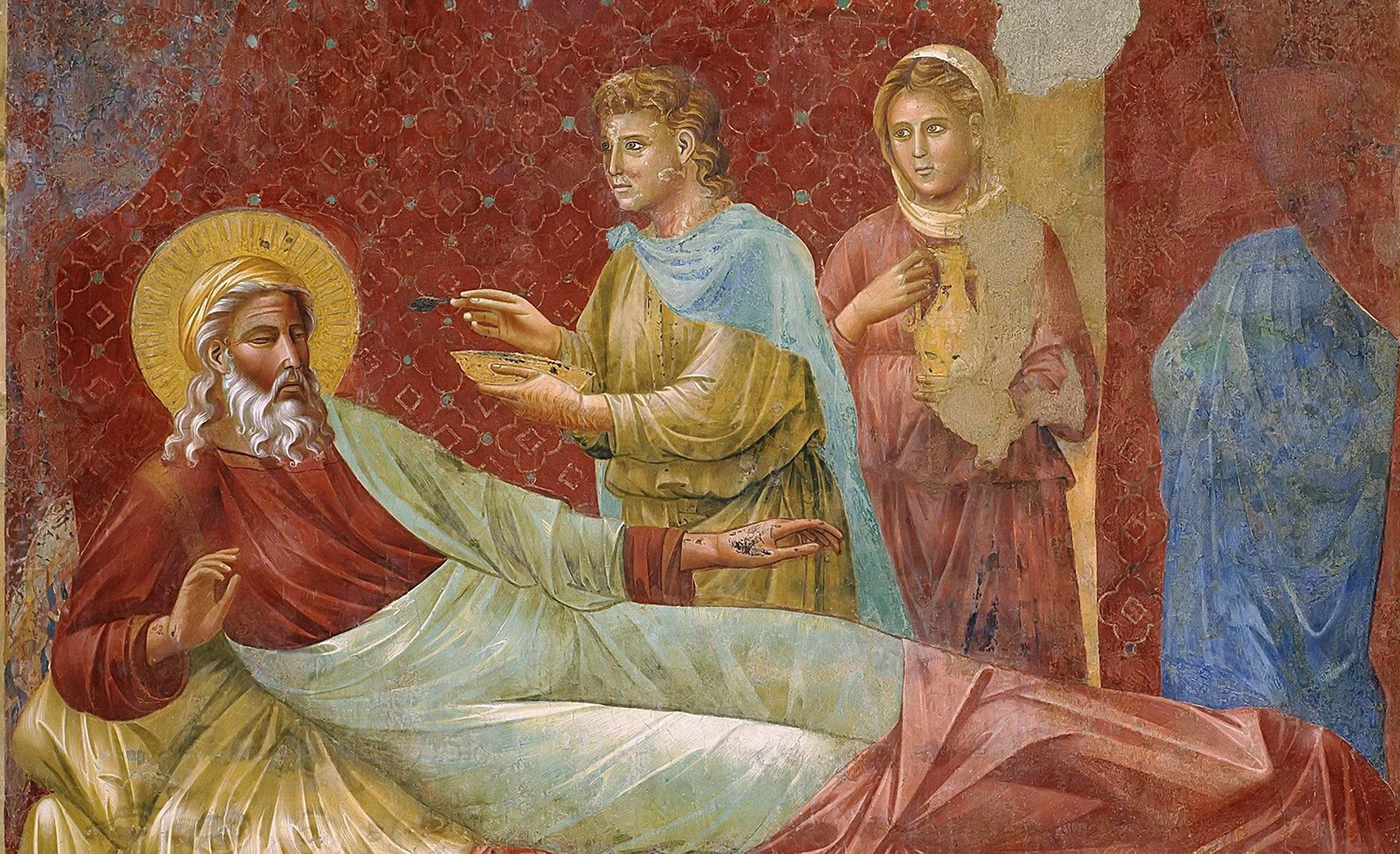 Isaac blessing his son, as painted by Giotto di Bondone, circa 1292-1294. Wikipedia.

Last week’s Torah reading of Lekh-L’kha (Genesis 12-17) tells the story of the birth of Abraham’s elder son Ishmael. By contrast, this week’s reading of Vayera (Genesis 18-22) has at its center the birth of his younger son Isaac. I say “by contrast” because, from the very start, beginning with the circumstances of their birth and their respective names, the text makes the difference between the two boys especially stark. Nor are these differences just a matter of literary curiosity; rather, they present divergent ways of relating to God.

The story begins when Sarah, despairing of her infertility, gives her maidservant Hagar to Abraham, hoping “to be built up through her.” Yet Hagar, once pregnant, ceases to treat her mistress with respect, and Sarah drives her from her home. At a desert oasis, an angel appears to Hagar and reassures her that she will bear a son whom she will name Ishmael—literally, “God listened”—“because the Lord has listened to your affliction.” The name Ishmael thus signifies to Hagar that God has taken note of her suffering and answered her prayers.

Naming is altogether an important motif in Genesis, but Ishmael and Isaac are the only two figures whose names are foreordained by divine decree. In Hebrew, “Ishmael” rhymes almost perfectly with “Israel,” the name of the Jewish people, containing the same number of syllables and ending with the same name of God (“El”). Indeed, the name Ishmael seems ideal for a biblical patriarch and would logically have fit the much-awaited birth of Isaac, whose father quite openly pleads with God to remedy his lack of an heir. Paradoxically, however, Isaac will instead be given, and again by divine decree, the wholly irreverent name of Yitzḥak—it simply means “he will laugh.”

Isaac’s birth, like Ishmael’s, is preceded by an annunciation or, more precisely, two annunciations. First, God tells Abraham (Genesis 17:19) that he will have a son borne to him by Sarah. By this time, he has reached the age of one-hundred and she of ninety; Ishmael is already thirteen years old. When Abraham laughs at the improbability, indeed the absurdity, of this forecast, God reassures him of its coming to pass and ordains the child’s name: Yitzḥak.

Sarah, to whom the news is delivered in the next chapter via an angel, likewise responds with laughter: “Now that I’m withered, am I to have enjoyment—with my husband so old?” But unlike Abraham’s laughter—which God seems to validate with His choice of name—her laughter earns rebuke, as it suggests a lack of faith. “Why,” God asks Abraham, “did Sarah laugh, saying ‘Shall I in truth bear a child, old as I am?’ Is anything too wondrous for the Lord?”

In response to this charge, Sarah, perhaps frightened, denies that she laughed, but God insists, “you did laugh,” in a manner that may not necessarily point to specific consequence or punishment but demands that Sarah take responsibility for her skepticism. Indeed, Sarah’s behavior here reminds us of her fiercely independent spirit, which, for better or for worse, contrasts sharply with the passive Hagar’s vision in the desert of utter dependence on God’s mercy for her and Ishmael’s survival.

The ambivalence of the biblical attitude toward laughter will become even more pronounced in subsequent instances of the word’s appearance, and most notably in this week’s reading. After Isaac’s birth, Sarah observes Ishmael m’tsaḥek, laughing or playing—from the same root as yitsḥak—and immediately decides he must be expelled from her home. We are left to infer that Ishmael was in fact taunting or harassing her son—plausible meanings of the word not only here but also when it reappears in Exodus to describe the Israelites’ behavior while worshipping the Golden Calf.

So it would seem that Isaac and Ishmael’s names should be reversed. Ishmael is a name for someone whose birth represents a fulfillment of God’s promise, whose life will be distinguished by prayer and faith. Ishmael, like so many biblical names, contains a name of God; Isaac’s does not. Isaac is a name for a troublemaker—one who might become, like Ishmael, a “wild ass of a man, whose hand will be on everyone and everyone’s hand will be on him” (Genesis 16:12), and who like Ishmael will ultimately be banished from the story of the Jewish people.

To make sense of this paradox, we must look to the third mention of laughter in the story of Isaac’s arrival on the scene. After giving birth to her son, Sarah proclaims: “God has made laughter for me; whoever hears will laugh for me.” This time, her laugh suggests not skepticism toward God’s promises but joy at their fulfilment. Moreover, Sarah no longer laughs alone. Rather, she laughs along with everyone who hears her glad tidings. A midrash teaches that at the moment Isaac was born, all women struggling with infertility were given the blessing of children.

That is to say, Sarah’s laughter now marks a point where individual will and universal destiny merge. While the birth of Ishmael is undoubtedly a product of God’s beneficence—He listens to the cries of Hagar and answers her prayers—the birth of Isaac is something more. Rather than being mere recipients of God’s blessings, Sarah and Abraham become conduits of His greater plan. Their wonderment at the miracle of Isaac’s birth is not just appreciation for what they have received—for which humble thanksgiving might be more appropriate than laughter—but a particular sort of awe at God’s execution of His design.

There’s another element here as well. Isaac, the designated heir, is born not to one-dimensional religious heroes but to real people with dynamic inner lives who question and doubt, even where God is concerned. And God seems to take pleasure in the independence of His creations. Laughter is a spontaneous expression, one that can’t easily be feigned or imitated. Where “Ishmael” suggests a kind of reactive obedience, “Isaac” evokes the freedom and joy of a life in partnership with God.

Jewish history has not always been characterized by laughter; neither, for that matter, was Isaac’s own life. Indeed, the end of Vayera features the binding of Isaac, a terrifying event in which not personal autonomy but obedience is demanded above all. Yet, even there, God does not ultimately require the ultimate sacrifice, and Abraham and his beloved son are left with the gift of life and laughter.

As the patriarchal narratives unfold, the nature of the relationship between God and the forebears of the Jewish nation evolves in its complexity as it dances between submitting to divine command and fulfilling the role of God’s independent partners. Abraham and Sarah’s vivid and multilayered reactions to the birth of Isaac, in contrast to the pathos-laden but monochromatic birth of Ishmael, mark key moments in that development.