It sounds less mercenary—which is probably also why real coins eventually gave way to chocolate ones. 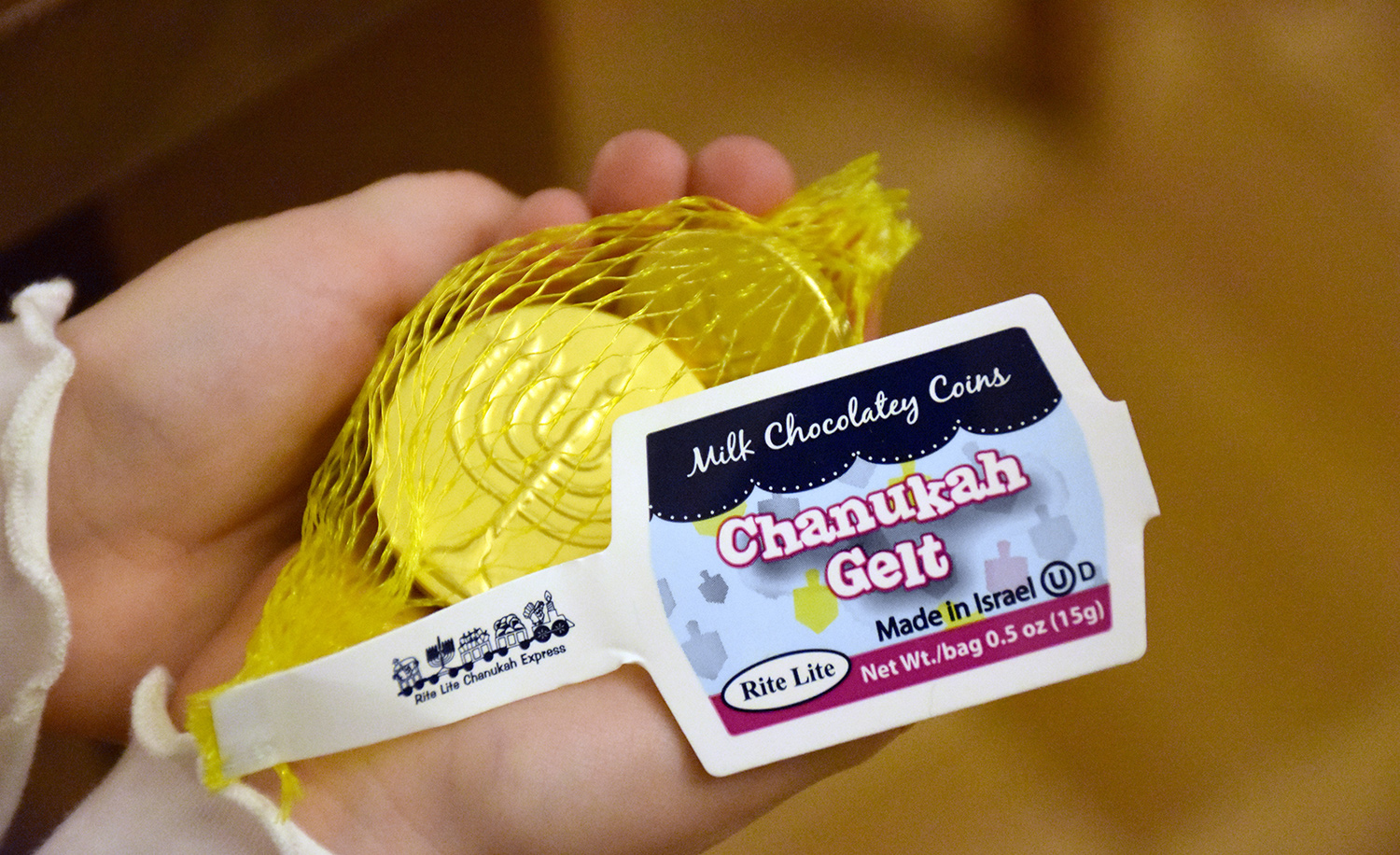 “Hanukkah gelt” is an unusual expression in American Jewish speech. Apart from the Orthodox, such Yiddishisms aren’t commonly employed in English for Jewish religious practices and customs. Orthodox Jews may go to “shul,” but most other Jews go to synagogue or temple. The former “daven,” the latter pray. The more punctiliously observant speak of “Likhtbentshn”; for the less rigorous, it’s candle lighting. Yet who says “Hanukkah money”?

Apparently, no one. That’s the conclusion to be drawn from an op-ed column published by Michael David Lukas this week in the New York Times under the title “The Hypocrisy of Hanukkah.” In explaining why he celebrates Hanukkah with his family, Lukas, who describes himself as an “assimilated” Jew and a “product of intermarriage,” speaks of “the version of Hanukkah that I grew up with: presents and chocolate gelt.” And at the end of the column, the gist of which is that, for the author, celebrating Hanukkah is basically a way of not celebrating Christmas, he writes about how, after lighting the Hanukkah candles, “I’m going to sneak my daughter an extra piece of chocolate gelt and break out the presents. Because at the end of the day, it’s all about beating Santa.”

Indeed, since the Times presumably has a few non-Jewish readers alongside its Jewish ones, it would seem that both Lukas and the paper’s editors expect them, too, to know what Hanukkah gelt is, at least when it comes wrapped in gold tinsel. And perhaps, in New York City if not in Iowa City, they do.

It may be that even assimilated American Jews speak of “Hannukah gelt” instead of “Hanukkah money” for the same reason that the coins once given on the holiday by Jewish parents to their children have become chocolate ones—that is, because “Hanukkah money,” let alone Hanukkah money that is actually money, is a bit embarrassing. It’s bad enough that Jews are reputed by Gentiles to be money-obsessed; must they confirm it by turning their version of Christmas into a financial transaction in which their children, as Lukas puts it, are paid in legal tender to “[eat] latkes with sour cream and apple sauce [and sing] a few somber, off-key songs that no one fully remember[s] about Judah Maccabee”? “Hanukkah gelt” sounds so much less mercenary.

And anyway, what are actual coins now worth? The shiny quarters and half-dollars that I and perhaps some of you received as children on Hanukkah, and that could buy armfuls of five-cent candy bars or ten-cent comic books, are today the equivalent of those days’ pennies. Better chocolate gelt and the same presents that Santa brings.

There was a time, before Hanukkah was called upon to compete with Christmas, when money was the only present Jewish children were given on the holiday. And there was a time before that when they weren’t given money at all, but gave it. There’s a good discussion of the subject in Itzhok Rivkind’s 1960 Yiddishe Gelt, a scholarly study that examines, in alphabetical order, every Yiddish term ending with gelt, from abonement-gelt (subscription money to a magazine or periodical) to tatsil-gelt (money lent by a group of card players to one of their number who has gambled away his last cent). Halfway through it, you’ll find khanikeh-gelt.

The custom of giving money on Hanukkah, Rivkind writes, goes back to at least the 18th century. The earliest attestation of it is in Ḥemdat Yamim, a well-known Hebrew work, first published in Izmir, Turkey in 1731, that compiles and discusses the customs of the Jewish year. In stressing the need to give financial assistance to poor Torah scholars, Ḥemdat Yamim’s unknown author relates how, as a boy, “I went from house to house on every day of the eight days of Hanukkah to collect money for pious students.” He continues:

Today, the custom has spread to different places of having children bring [gifts of] money to their teachers on Hanukkah and of the poor soliciting alms from door to door, although the main recipients, as I have said, are indigent scholars.

The Yiddish term khanikeh-gelt first turns up in Eastern Europe about a half-century later. Originally, it had nothing to do with children. Its earliest usage refers to a custom whereby rabbis and other religious functionaries—cantors, itinerant preachers, synagogue beadles, etc.—traveled on Hanukkah to outlying villages in order to ask for donations from the small Jewish populations there that did not normally contribute to communal institutions.

In the course of time, going from door to door to request money on Hanukkah also became an accepted practice for Jewish beggars, whose intrusions were not tolerated during the rest of the year, and eventually children joined in, too. A 19th-century jingle went, Di vokh fun khanikeh iz a velt/ Ven ale geyn kleybn khanikeh-gelt, which is freely translatable as “Hanukkah week is one big ball/ With Hanukkah money for one and all.”

In the end, only the children were left. Yet unlike later generations of them to whom Hanukkah gelt was handed out only at home by parents, they continued to make the rounds from door to door—not to every door, as American children do when trick-or-treating on Halloween, but to the doors of all of their relatives in their East European shtetl. Sholem Aleichem has a humorous story called “Hanukkah Gelt” in which two brothers visit their Uncle Moyshe-Aron, their Uncle Itzi and Aunt Dvoyre, their Uncle Beynish, and their married sister Eydel to get what they can from each.

The story concludes with the brothers wishing there still were Hanukkah beggars, because they don’t know what to do with the antiquated currency that Moyshe-Aron has handed them: “discontinued five-kopeck coins, ancient thruppences, and ponderous Austrian groschens.” They try giving it to their mother, who refuses to take it and asks, “Who palmed this stuff off on you?”

The story’s last lines are:

We stood there too embarrassed to answer.

“You know what?” said my brother Motl. “Let’s hide it in the oven, or throw it outside in the snow where no one can find it.”

But as though especially to spite us, there wasn’t a poor person in sight. What had happened to all the beggars who grabbed you by the coat and wheedled, scolded, and cursed? Just when you need someone, they’re never there. There wasn’t one single beggar! Not one!

You can bet those two kids would have liked some chocolate.