The (Shockingly Low) Literacy Rate of Jews in Eastern Europe

There were many more illiterate Jews in the Tsarist empire than we tend to think there were. 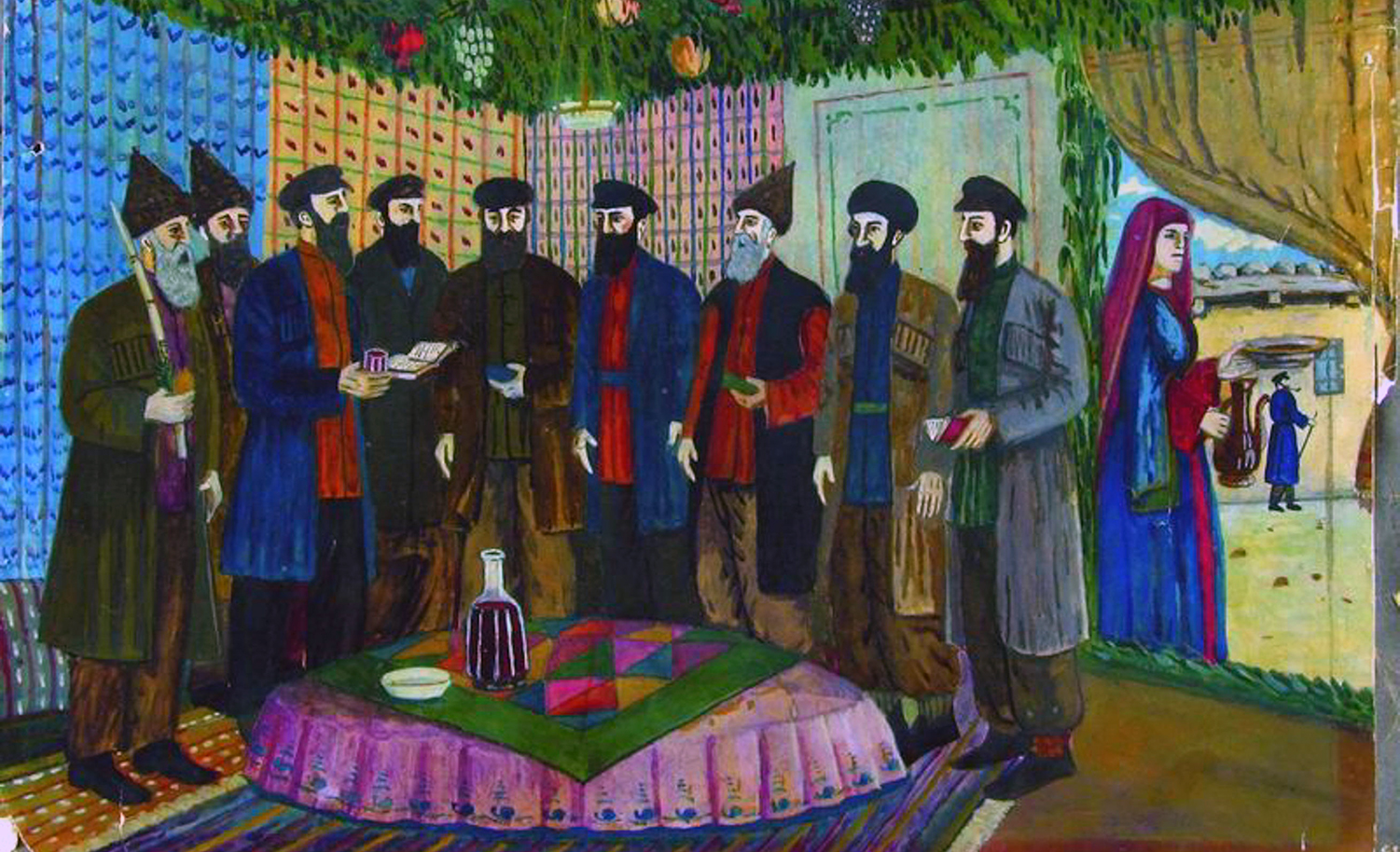 From The Feast of Sukkot by Shalom Koboshvili. Alamy.

In my last column, I had occasion to mention Ts’enah u-R’enah, a book I called “the most popular . . . of Yiddish Bible translations,” and one having “a large amount of Midrash and rabbinic commentary” woven into it. I also observed that the book was “intended primarily for use by women . . . as indicated by its name, taken from the Song of Songs.”

In response to this, Mosaic reader Leonard Berkowitz has sent me a copy of a recent article by Rabbi Moses Faierstein, the author of an annotated English translation of Ts’enah u-R’enah. Entitled “A Guide to the Ze’enah U-’Re’enah: Correcting Some Misconceptions,” the article discusses a number of commonly held but wrong ideas about the book that my column was guilty of restating. The two major ones are, first, that Ts’enah u-R’enah is a translation-plus-commentary when it is in fact a pure commentary that “does not translate or paraphrase” the biblical text at all; and, second, that it was intended only for women rather than for women and men alike.

I’m happy to stand corrected on both points. Even though my description of Ts’enah u-R’enah as “intended for use by women” was qualified by “primarily,” I had no idea that the book—which, Rabbi Faierstein points out, has gone through an incredible 275 or more printings since it first appearance in 1622—was written with both sexes equally in mind and that its Hebrew title page explicitly says that it is meant for anashim v’nashim, “men and women.”

Rabbi Faierstein blames the mistaken notion about Ts’enah u’R’enah’s intended audience on the “conventional wisdom that considers early-modern Yiddish literature, and especially religious literature, to be for women, girls, and some ignorant men.” This bias he attributes to the anti-Yiddish prejudice of many 19th- and early 20th-century Jewish scholars and historians, and to the anti-religious prejudice of “secular Yiddishists, Bundists, and Communists.”

He is no doubt right about this. I would, however, add one more factor, namely, the widespread assumption that most male Jews in Yiddish-speaking Eastern Europe had enough education to read the Bible and its simpler commentaries in Hebrew and had no need of the Yiddish aids required by females.

This assumption is largely based on the fact that attendance in a ḥeder, the Jewish schoolroom of Eastern Europe, was traditionally mandatory for small boys, and that most larger Jewish communities had communally-funded schools for poor children whose families could not afford a private one. Ḥeder education was divided into three stages, the first two of which, usually beginning at the age of four or five and ending at seven or eight, involved mastering the Hebrew alphabet, learning to read the words of the Hebrew prayer book with an approximate understanding of what they meant, and studying some or all of the Hebrew text of the Ḥumash or Five Books of Moses. Since, it is commonly thought, most boys finished these two stages, such basic knowledge accompanied them for the rest of their lives.

The problem is that virtually no statistics exist with regard to any of this, so that we have no way of knowing, apart from undependable anecdotal evidence, how true it is. How many children never went to ḥeder at all? How many dropped out after a year or two, when their reading skills, let alone their ability to parse a biblical verse, were still minimal? How many were taught by incompetent teachers from whom they learned next to nothing? How many forgot what they did learn after leaving the ḥeder at a young age?

Although there were clearly cases of all these things, we have no idea of their frequency. Similarly, while we know there were poor Jews with only basic ḥeder educations who participated as adults in religious study groups, we don’t know their numbers. And while it was customary for Jewish men in the shtetl to attend synagogue services on at least Sabbaths and Jewish holidays, we can’t say how often this duty was either shirked or fulfilled with no ability to read the prayers or to read them with any understanding.

Interestingly, the most relevant statistical study in our possession shows some surprising results. This is the Russian census of 1897, the only one ever undertaken in Tsarist times. On the subject of basic literacy, those polled were divided into age cohorts and asked whether they could read and write Russian, and if not, whether they could read and write any other language.

These figures have been analyzed by the American Jewish sociologist Joel Perlmann, who makes the following observations about them.

(1) Since 97 percent of all Jews in the census reported Yiddish as their mother tongue, Yiddish must have been the “other language” that they claimed literacy in.

(2) Whereas many Jews literate in Yiddish were not literate in Russian, the reverse was extremely rare, since any Jew who learned to read and write Russian was almost certain to have learned to read and write Yiddish first. Thus, the total percentage of Jews literate in Yiddish would have been the joint sum of the “yes” answers for Russian and “another language.” For the male cohort aged ten to nineteen, this was 60 percent (and 44 percent for females), rising to 71 percent (46 percent for females) in the age bracket of twenty to twenty-nine and gradually decreasing from there to a low of 54 percent (15 percent for females) in the sixty-plus bracket.

(3) The reason that the highest literacy rate, for men and women alike, was found in the group aged twenty to twenty-nine was that this cohort was the most affected by the modernization increasingly changing Jewish life in the late-19th century. (The group aged ten to nineteen had a lower rate because it included youngsters not yet literate who would become so as they grew older.) By the same token, the lowest literacy rate was in the sixty-plus group, whose members were born no later than 1837, when Jewish society in Eastern Europe was still highly traditional and hardly affected by modernization at all.

(4) Although the census figures for “another language” do not distinguish between Yiddish and Hebrew, they do give us a theoretical ceiling for Hebrew, since almost no one literate in Hebrew would not also have been literate in Yiddish, which uses the Hebrew alphabet. In practice, of course, literacy in Hebrew would have been far lower than in Yiddish.

Altogether, these figures are shockingly low for anyone wishing to think that there was something approaching universal male literacy in Jewish Eastern Europe: approximately a third of all male Jews, according to the 1897 census, could read and write no language at all! Therefore, some have attempted to question the figures’ validity. Yet by comparing them with other results—including U.S. Bureau of Immigration statistics of literacy rates among Jewish immigrants in the early 20th century, and the comprehensive Soviet census of 1926—Perlmann demonstrates convincingly that they are accurate. There were, in short, many more illiterate Jewish men in the Tsarist empire than we tend to think there were.

What does this mean for books like Ts’enah u-R’enah? From an 1897 Russian census we can’t, of course, draw too many conclusions about Jewish literacy in the 17th century, when Ts’enah u-R’enah was written, or in the 18th and 19th centuries, when it went through hundreds of editions. But there are some things we can say.

One of them is that since Jewish ḥeder education in the first half of the 19th century probably reached at least as many Jewish children as it had in previous generations, the 54-percent literacy rate shown in the 1897 census for male Jews born before 1837 would probably not have been exceeded in 1622 when Ts’enah u-R’enah was published. To put this in other words, at the time of Ts’enah u-R’enah’s publication, nearly half of the male Jewish population of Eastern Europe would not have received enough of a ḥeder education to be able even to read Yiddish, much less to have mastered a knowledge of biblical Hebrew.

What percentage of East European Jewish men in those days could have read the Bible in Hebrew? It’s anyone’s guess. Whatever it was, it would have left a large number of Yiddish-reading men who couldn’t. Ts’enah u-R’enah, as Rabbi Faierstein asserts, would have been written for them, too.

The (Shockingly Low) Literacy Rate of Jews in Eastern Europe