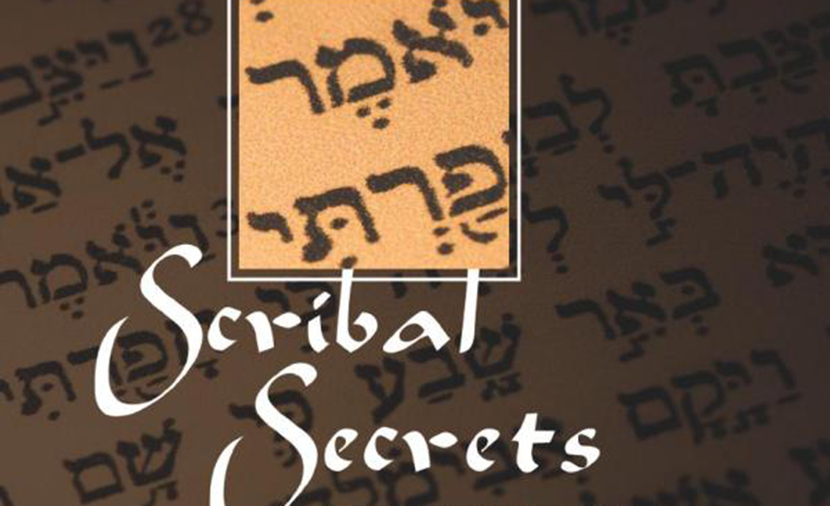 It’s something I’ve noticed many times in the Bible without ever stopping to wonder about it.

What are they doing there?

This question is the subject of a new, posthumously published book by Rabbi James Diamond, prepared from a manuscript left after his death in 2013 by two fellow scholars in the field of Jewish studies, Robert Goldenberg of Stony Brook University and Gary Rendsburg of Rutgers. Entitled Scribal Secrets: Extraordinary Texts in the Torah and Their Implications, Diamond’s study also deals with a second, closely related set of graphemes (to use a word denoting written notations that are not necessarily spellings of anything): namely, those Hebrew letters in the Torah that, though their pronunciation remains the same, are either larger than their normal size (in which case, they are called majuscules) or smaller (these are called minuscules).

But let’s stick to the dots—all in all, they appear in ten verses—and leave the majuscules and minuscules for another time.

There is a considerable body of literature on the use of dots in the Torah scroll. Some of it is rabbinic and some the work of modern scholarship. As Diamond shows, the ancient rabbis and the modern scholars agree about two things.

First, the dots sometimes indicate that the words or letters marked by them are considered to be of doubtful provenance and may not belong in the text. Here I must say that, having always subscribed to the conventional notion that rabbinic tradition holds every last word in the Torah to be God-given at Sinai, I was surprised to learn of biblical verses that were thought in ancient times to contain possible scribal errors. Yet, as Diamond points out, a rabbinic legend from the early centuries of the Common Era, found in a number of midrashic sources, states as much. Here is a version of it:

Ezra [according to rabbinic tradition, the canonical Torah scribe] reasoned thus: if the prophet Elijah comes and asks me, “Why have you written these letters and words and passages?” I will reply: “That is why I have put dots over them.” And if he says to me, “You have done well to write them,” then I shall erase the dots over them.

The dots, in other words, were a nota bene—a “mark well”—to the reader. Ezra inserted them not because he was certain that the words or letters beneath them were spurious—in that case, he wouldn’t have included them—but because he wasn’t certain and wanted to make that clear.

Interestingly, modern scholars have pointed out that the same dotted notation, called a diplē, was used by Greek manuscript copiers of the Hellenistic period to mark questionable parts of a text. The custom first developed in Alexandria, the great cultural center of the Hellenistic world that had a large Jewish population, and there can be little doubt that it was borrowed from the Greeks by Jewish Torah scribes—who did not, however, go quite so far back as Ezra. I might add that the diplē has survived to this day in the profession of copy-editing, though it is now placed beneath the line rather than above and has a different meaning. Called a “stet mark” from the Latin for “let stand,” it overrules a previous editor’s suggested deletion.

Let’s take the smallest case of a diplē in the Torah, one involving a single letter. The ninth verse of the tenth chapter of the book of Numbers, in speaking of those who cannot attend the Passover sacrifice because they are ritually impure or unable to reach the Temple in Jerusalem, reads:

[And God said to Moses:] speak unto the people of Israel saying, “Any person [ish-ish] of your posterity who is defiled by a corpse or is on a far road and would offer a Passover sacrifice to the Lord can perform it [a month later] on the fourteenth day of the second month.”

In the Hebrew, “on a far road” is b’derekh r’ḥokah, בדרך רחוקה, and there is a dot over the heh, the final letter of r’ḥokah, to indicate that it may represent a Torah scribe’s mistake that was then perpetuated by other scribes.

Why might such a mistake have been made? Probably because in the Bible the noun derekh, way or road, is sometimes masculine (in which case it would take the adjective raḥok without the final heh) and sometimes feminine (in which case the adjective would be r’ḥokah). Since there were conflicting opinions as to which gender the word should be in Numbers 9:19, where the feminine form ultimately prevailed, scribal tradition kept the heh but dotted it.

And yet not all ancient rabbis were willing to accept the possible existence of a scribal error in the Torah, In illustration, Diamond cites a discussion of Numbers 9:10 in the mishnaic tractate of P’saḥim, which deals with the laws of Passover:

What is a far road? According to Rabbi Akiva it is the distance [from Jerusalem] to Modi’in [a town some ten miles away] in any direction. Rabbi Eliezer says it is [the distance] from inside the gallery [of the Temple, from which the Passover sacrifice could be viewed] to outside. Rabbi Yosi says: hence there is a dot over the heh—to tell us that the distance need be no farther than a step from the gallery.

All three rabbis, Akiva, Eliezer, and Yosi, agree that the dotted heh in r’ḥokah is not meant to indicate a possible error. Rather, it is an intrinsic part of the Torah revealed at Sinai and has exegetical significance. For Akiva, this is to emphasize that the adjective is feminine and modifies derekh and not the masculine ish-ish, “any person”: what matters in determining one’s eligibility for a second sacrifice in the Temple is whether or not one was too far away to get to it in time for the first sacrifice.

Rabbi Eliezer, whose position is explained by Rabbi Yosi, disagrees. The heh is dotted to stress that the adjective r’ḥokah can also be read as raḥok and thus modify ish-ish, so that any person who is even a step away from the Temple gallery and is prevented from taking that step (say, by an accident or emergency) is also eligible for the second sacrifice. (Such a construction has little justification in terms of the syntax of the verse, but never mind.)

And that is the second thing on which the rabbis and the modern scholars agree: namely, that the diplē in the Torah scroll was occasionally used to make an exegetical point of just this sort. As the great Talmud scholar Saul Lieberman observed in his Hellenism in Jewish Palestine (1950), dots were sometimes used by Greek copyists not to question the authenticity of something in a text but to tell the reader to pay special attention to it, much as we might use italics or a bracketed exclamation point today.

Dots that function in this way in the Torah can be most clearly seen in Genesis 33:4, which tells of Jacob’s meeting with his brother Esau after a long and hostile estrangement. “And Esau ran to him and embraced him and fell on his neck and kissed him and they wept,” the text reads, while dotting “and kissed him,” vay’shakeyhu. It does this because, though there was no dispute over vay’shakeyhu’s belonging in the text, the rabbis disagreed over whether Esau’s kiss was sincere or duplicitous. “Pay especially close attention,” the dots say here, “because this word needs to be thought about very carefully.”

Although Diamond accepts modern scholarship’s conclusions regarding the historical origin of the dots in the Torah scroll, he urges us to pursue the exegetical approach to them, too, and he does so himself. In his own, 21st-century midrash on the dotted heh of r’ḥokah, he writes:

The issues of belonging and being far away from Jewish life and its institutions are very much with us in our time, especially in view of the extreme mobility of our society and the process of suburbanization and exurbanization. Like the [ancient] rabbis, we, too, struggle with how spatial distance affects belonging to the Jewish community and its institutions and participating in the key moments of Jewish time. . . . Is distance a physical matter determined by how far one lives from a synagogue or from areas where the Jewish community is concentrated? Or is distance a function of the subjective state of the individual in question, a matter measured not by the odometer but by the intensity of feelings of alienation or connection?

That’s a lot to extract from a single dot that’s thousands of years old—and yet it’s the way the Torah has always been read by its rabbinic commentators.