It's Time to Talk About Moons and Months

Why the words for both are so similar in so many languages, and why Hebrew has turned out to be the rare exception. 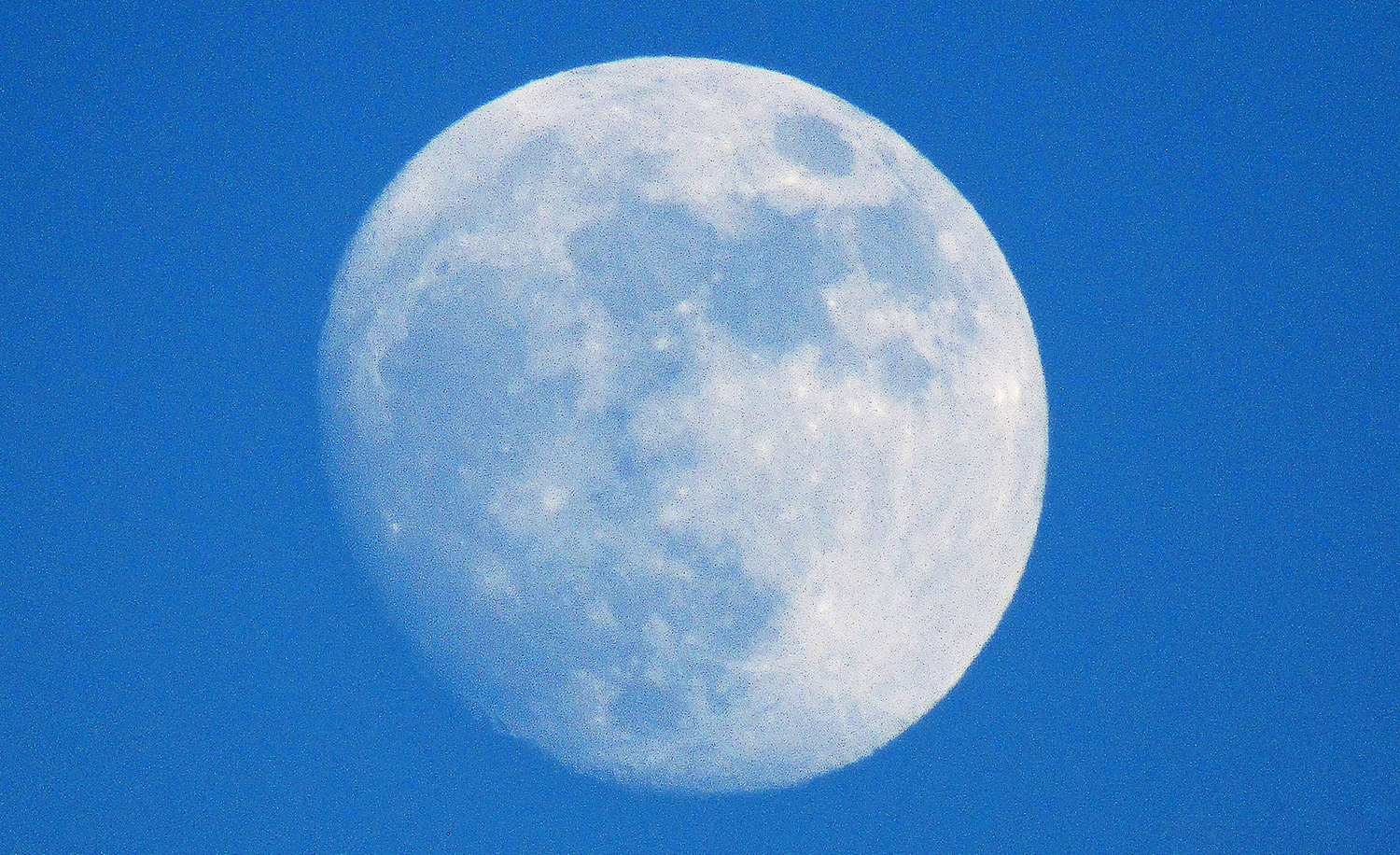 With the Hebrew lunar month of Elul now in its third quarter, and the lunar month of Tishrei approaching, it’s a good time to talk about moons and months.

The similarity or identity of the words for moon and month in a high percentage of the world’s languages attests to the lunar cycle’s having been a basic measurement of time from the earliest stages of human history. Our English words “moon” and “month” are themselves an example. So, looking now at a few widely divergent tongues, are Swedish måne and månad; Polish miesiąc and miesiąc; Lithuanian mėnuo and mėnulis; Finnish kuu and kuukousi; Turkish ay and ay; Japanese tsuki and tsuki; Chinese yuè and yuèliang; Indonesian bulan and bulan; Swahili mwezi and mwezi; and Mohawk ehnita and ehnita.

In the case of the Indo-European languages on that list (English, Swedish, Polish, and Lithuanian), the words for moon and month ultimately derive from the proto-Indo-European noun mėhns, which in turn comes from the conjectured verb meh, to measure. The root of meh also appears in a lunar context in some Indo-European languages in which the words for moon and month are not etymologically related. Thus, “moon” in Latin is luna, which goes back to the Indo-European root lewk, “bright” or “shining” (as in Greek leuko, “white,” whence leucocytes or white blood cells); hence, Spanish and Italian luna, French lune, and Portuguese lua.

Yet the Latin word for month is mensis, which gives us Spanish mes, Italian mesa, French mois, and Portuguese mês. Welsh similarly has lleuad for “moon” and mis for “month.” Most likely, then, the original word for moon in proto-Indo-European derived from the lewk root, which was then wholly or partially displaced by mėhns-root words.

In Hebrew, the opposite happened. Once, the words for moon and month were either almost or completely identical. “Moon” in biblical (as well as modern) Hebrew is yare’aḥ, a word with cognates in the name of the Phoenician moon-god Yarikh, in ancient Akkadian warḥu, and modern Tigrinya (a Semitic language spoken in Ethiopia) werhi.

Another biblical word for month is yeraḥ—or so the dictionaries say. But since yeraḥ is nearly always found in the Bible in the construct case, in the sense of “the [or “a”] month of” something (as in yeraḥ bul, “the [Canaanite] month of Bul,” in I Kings 6:38), it may be that it is simply the construct form of yare’aḥ and not a separate word in its own right.

Be that as it may, yeraḥ/yare’aḥ was the original Hebrew word for month. Already in early biblical times, however, a second word began to compete with it and would eventually replace it, just as happened with lewk-root words in Indo-European languages. That word was ḥodesh, a nominal form of the Hebrew adjective ḥadash, “new,” which designated the day of the new moon.

That this day was one of celebration and worship in biblical times we know from a number of places in the Bible, such as the next-to-last verse of the book of Isaiah, in which God speaks to the prophet of “all people coming to bow down before me . . . on every Sabbath and every new moon” (midey ḥodesh b’ḥodsho) and the account in the book of Samuel of a festive meal at which King Saul hosted his court every month at the new moon (ba-ḥodesh).

But while ḥodesh continued to mean “day of the new moon” throughout most of the biblical period, it also came to mean “month,” as it does in rabbinic and modern Hebrew. There, the day of the new moon is rosh ḥodesh, “the start of the month,” just as rosh ha-shanah is the start of the year. And indeed, of all the Jewish holidays. Rosh Hashanah alone falls on rosh ḥodesh, when the moon appears as a tiny sliver in the dawn sky.

This is a fitting time for a holy day that is accompanied by all the hopes and fears of the start of another year. In the words of the noted Judaica scholar Morris Jastrow, whose 1914 book Hebrew and Babylonian Traditions is still well-worth reading:

Periods of transition are naturally associated with a certain element of uncertainty. . . . The coming of something new turns men’s thoughts to the future—unknown and mysterious. There is in festivals celebrated at periods of transition an undercurrent of anxiety and uncertainty, often disguised under an artificial jollification. . . . In the case of the moon, it was natural that this element of uncertainty would have a special force at the end of the month, when the moon entirely disappears.

It was from or in Babylonia, probably at the time of the Babylonian exile following the destruction of the First Temple in 586 BCE, that the months of the Jewish calendar received the names by which they are known, of which Elul (the Babylonian Ululu) and Tishrei (the Babylonian Tashritu) are two. Prior to that, the biblical Hebrews, unlike the Canaanites, did not have names for their months and simply referred to them by numbers as “the first month” (i.e., Nisan, the month of Passover), “the second month,” and so on. Thus, the book of Leviticus says of Rosh Hashanah, “In the seventh month, on the first day of the month, you shall have a great day of rest [shabbaton], a memorial of clarion calls [of the shofar] and a holy convocation.”

Tashritu was the seventh month of the Babylonian year, too. Yet in Akkadian, the ancient Semitic language of Babylonia, the word tashrit means “beginning” and comes from the verb shurru, to begin. This was because, like the Hebrew Tishrei, Tashritu was the month of a new year’s celebration. And if one asks how a new year can begin in a year’s seventh month, the answer is that the ancient Babylonian religion had two new year’s days, one celebrated in the first, spring month of Nisanu and one in Tashritu.

Here, too, the parallel with biblical religion is close. There is ample evidence in the Bible and rabbinic tradition that Nisan, counted as the year’s first month, once featured a new year’s celebration, too. (Parenthetically: the Talmud also lists 15 Sh’vat and 1 Elul as new years.) This is not entirely surprising when one considers that both the autumn and the spring are turning points of the year, though of a different kind in the Middle East from elsewhere.

Whereas, in regions like Europe and North America, spring and summer are the time of vegetative growth and winter the time of nature’s hibernation, in the Middle East it is the opposite: the green time of the year is the winter, when rain falls and plants and crops grow, reaching their climax in spring, after which they die off or go into quiescence during the long, dry summer.

Tashritu was the month in which the agricultural cycle began anew. Nor is it a coincidence that the Hebrew word for summer, kayits, is closely related to the word kets, “end”—that is, the end of the year. In Israel, the rains usually begin again in late September or October, which is when nature comes back to life. (The first light autumn rain actually fell in Israel a few days ago.)

In terms of both the annual solar and the monthly lunar cycle, therefore, Rosh Hashanah, on which Jewish tradition tells us that we are judged for the past year and assigned a reckoning for the future one, comes at the end of the end and the beginning of the beginning. And that’s the first day of Tishrei.

It's Time to Talk About Moons and Months