Some end-of-year remarks on the path of life, spoken in honor of those who do end-of-life work. 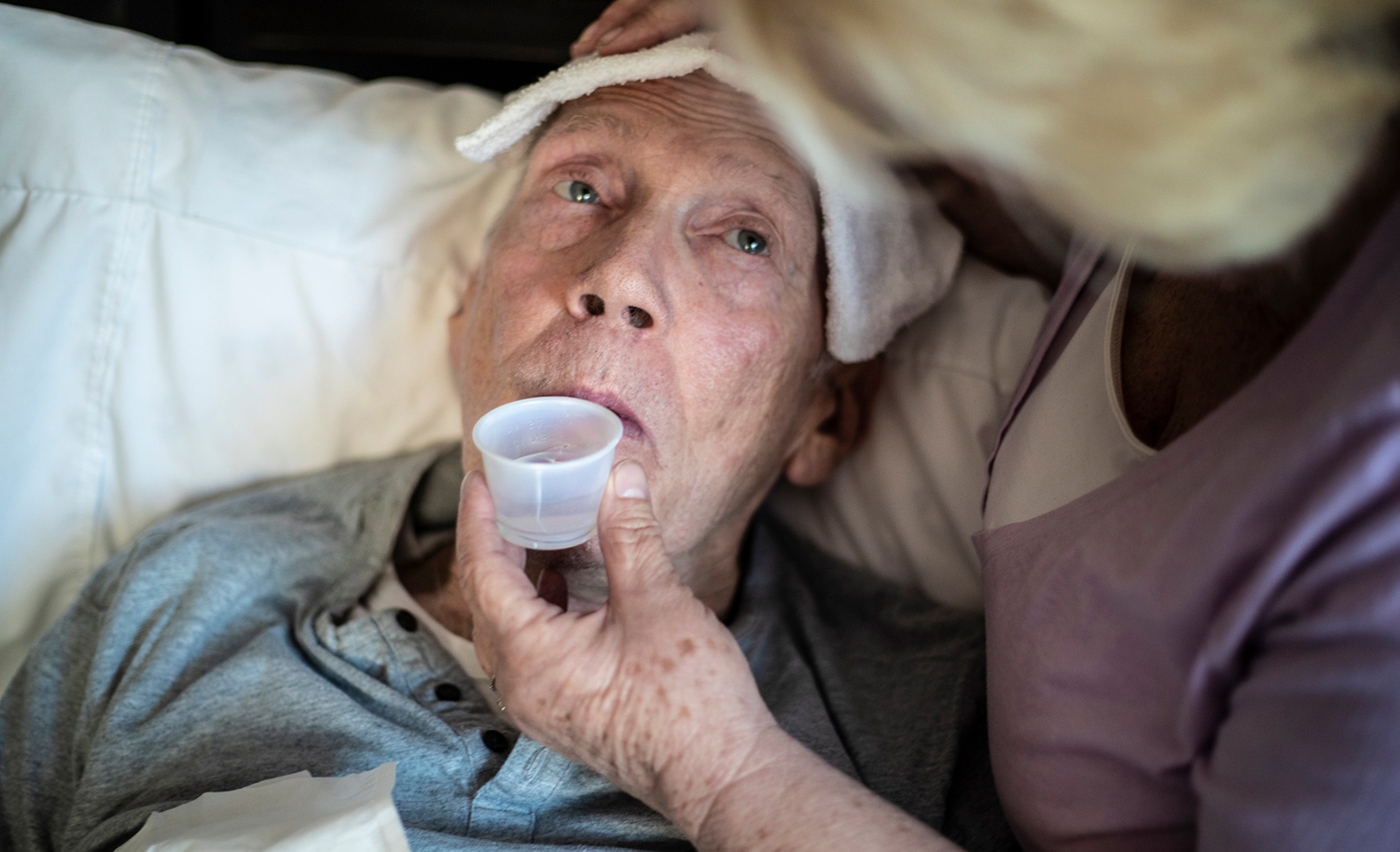 Observation
Alan Rubenstein
About the author


Alan Rubenstein, director of university programs at the Tikvah Fund, teaches a great-books seminar, “Windows on the Good Life,” at Carleton College in Northfield, Minnesota.

In the small American town where I live (population 20,000), there are only a few Jewish homes in which, on Friday evenings, candles are being lit and blessings recited over wine and challah. In our own home, where the Sabbath is welcomed each week, the day’s special character is customarily augmented by the presence of guests. These dinner guests are almost always of Christian descent, if not confession, and are often witnessing the Sabbath-table ritual for the first time. For our children and us, it is an amazing opportunity, week after week, to share this treasure with our kind American neighbors.

By virtue of the connections we’ve made, people have come to think of me as a person with something to teach about Judaism, about Israel, about similarities and differences between Judaism and Christianity, and about other related topics. Occasionally I’ve taken a place in rotation with the pastors and priests contributing “Faith Matters” columns to the local newspaper. In partnership with the nearest Chabad community, located 50 or so miles away, I’ve also brought to town the annual lighting of a large Hanukkah menorah in the town square.

It was in this same role of mine as an unelected and unsupervised ambassador of the Jewish people that I recently received a surprising invitation. The chaplain at the hospital—there’s only one in town—asked me to serve as guest speaker at the annual holiday event honoring the volunteers who run the local hospice and the families who benefit from its services. This was daunting: to speak to a room full of mourners, still feeling the keen edge of their grief and, it must be added, without their actually having requested to be educated about or exposed to anything related to Judaism.

Accepting the invitation despite my reservations, I looked for suggestive passages in an ancient text that both Jews and Christians cherish and about which I might be able to speak in a way that each could recognize as valid: namely, the book of Psalms, to which I would add one or two other Jewish sources. What follows is a lightly edited version of my remarks.

I want to begin by thanking Julia and Sara for inviting me to speak. These two women—and really all of you who staff the hospice—do holy work, providing comfort and love to those in their final days of life.

What can I say to honor this occasion? My offering tonight will take the form of some gleanings from the tradition I belong to—that of the Jewish people. I hope to inspect, question, and interpret these passages with you. I’ll start with this one:

The whole world—all of it—
is a very narrow bridge.
The important thing
is not to fear: not at all.

This bit of verse is ascribed to Naḥman of Breslov, a rabbi who lived in Eastern Europe in the late-18th and early-19th centuries. As it happens, the first time I heard it was on September 11, 2001, in direct relation to the terrible, fright-inducing events of that day. But it has returned to me many times since. What does it teach?

It teaches that the world—the world in truth—is not the safe and stable place, the predictable place, that we often let ourselves believe it to be. We walk along in blissful ignorance, taking each day, with its share of joy and trouble, as it comes to us. Then the pattern is broken; a car accident, a fire, an illness. A loved one is stricken; death tears away something infinitely precious. At such moments, the truth of life’s precariousness breaks forth from behind the curtain. That path we were walking along—all that time, we realize, it was a very narrow bridge. How can we keep walking on it when so vast an expanse of terror stretches beneath?

In a way, the brief poem by Rabbi Naḥman is similar to the 23rd psalm of David. What is the mood of that famous piece of biblical poetry? Peaceful pastures, still waters, a table prepared. But in the midst of this psalm—almost at the exact middle in fact—we hear: “Yea though I walk through the valley of the shadow of death I will fear no evil.”

When do we walk through that dread valley? Always.

What’s more, the precarious world that I’ve been describing so far is only the world of external threat. Any of us can be unsettled from without: maybe you today, maybe me tomorrow. Shakespeare’s Hamlet conveys as much when he complains of “the thousand natural shocks that flesh is heir to.”

But there are also forces of unsettling from within. Psalm 30, like Psalm 23, hands us an envelope marked Joy and Gratitude, but harbors within it a dark cloud. The line that haunts me is verse 8, because I know all too well the vacillation of which it speaks.

Lord, by Thy favor thou hast made my mountain to stand strong. Thou didst hide Thy face, and I was troubled.

Here we don’t learn about the impermanence of the good things that the Lord both giveth and taketh away. Here we learn, rather, about the impermanence of our own inner strength. One moment, we feel that we dwell in God’s pleasure—His face is shining on us, and we are at our best, mountain-strong. In a breath, unaccountably, God’s face is hidden, and our inner fortitude is stricken down.

The Hebrew word that the King James translators render in this verse as “troubled” is nivhal. It means to lose one’s bearings. To experience the vertigo-of-existence. Do I belong anywhere? Am I loved? Can I go on? For those who recall the story of King Saul’s visit to the necromancer of En-dor, it is Saul lying on the floor of her abode. It is the narrow bridge of our own fragile psyche.

This is a gloomy picture, I confess. I draw it for you because I want to honor the pain of loss that I imagine so many of you feel and have felt. You have been on the very narrow bridge. Maybe you are there now, watching over someone you love in their final moments, facing the rest of your life without them. But if the valley and the bridge are the truth—the very truth that we divert ourselves from with our workaday cares and distractions—can we really conquer our fear?

We can and we do. Indeed, precisely because there is so much to fear, we are commanded to assert our fearlessness. “I will fear no evil,” says the Psalmist, unequivocally. “The important thing is not to fear: not at all!,” says Rabbi Naḥman. And that is why, in honoring the pain and the fear, I also want to honor your own powers of fearlessness and of courage, the same fearlessness embodied and expressed in these poems, these songs, these Psalms.

You who are now walking the narrow path with those you love are also beautiful, as are you who personify the philosophy of care that is hospice: a philosophy whose defining feature is courage in the face of death.

“Teach us to number our days, that we may apply our hearts to wisdom,” says the book of Psalms (90:12). I think these words were written for your holy work. If I may ask something of each of you, I ask that you make a special point of joining, fearlessly, in the singing that is so loud and so full during this holiday season, so that the Psalmist’s words will be true for you as well in the coming year:

Thou hast turned for me my mourning into dancing.
Thou hast put off my sackcloth, and girded me with gladness.

And there is one more biblical passage to keep in mind here as I close: a famous blessing that occurs in the book of Numbers. Marvelously, its words also happen to constitute the oldest physical piece of Hebrew writing ever discovered. They were found in 2010, by archaeologists digging in Jerusalem, incised in two tiny silver scrolls dated to the 7th century BCE. They are most appropriate for this occasion; they apply to all of you; and I suspect that many of you know them: