English is a language notorious for its strange spellings, and its speakers are more willing to tolerate aberrations than are speakers of other languages. 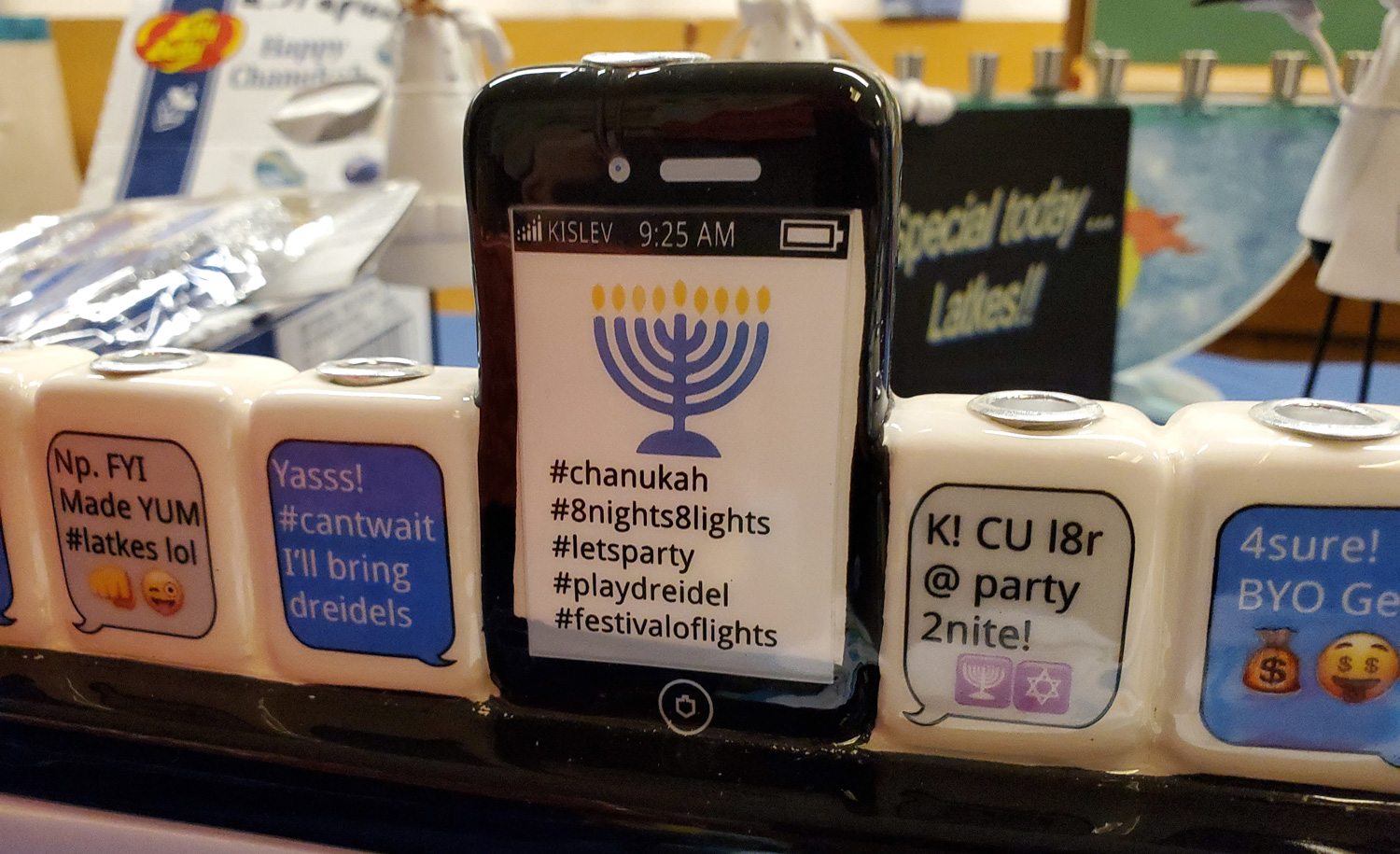 A menorah made up of various hashtags and references to social media. Smith Collection/Gado/Getty Images.

Are we celebrating Hanukkah or Chanukah this week? Neither the English language nor American Jews would seem to have decided which way to spell the word. One sees it in both its H- and Ch-forms, and while it’s my impression that the former is steadily gaining, the contest shows no sign of ending soon.

The problem lies in the English transliteration of the first letter of the Hebrew word חנוכה. The name of this letter is usually spelled het in English—unless it’s spelled chet—although sometimes it’s ḥet—except if the Hebrew in question is that of Ashkenazi (Central and East European) Jewry, when it’s often khes. And the sound the letter stands for has been a subject of contention, too.

While the arguments over it now belong to the past, it’s with the past that we need to begin.

Biblical Hebrew, like Arabic and other Semitic languages, had several sounds, or phonemes to use the linguistic term, that most English speakers have trouble with. One of these is what linguists call a voiceless uvular fricative. Produced at the rear of the oral cavity by contact between the uvula and the root of the tongue, it is a scraping sound similar to that made when clearing the throat of phlegm.

This phoneme—as well as its close cousin, the voiceless velar fricative (a softer sound, made slightly closer to the front of the mouth)—exists in many European languages, once existed in English, and still exists in the Scots pronunciation of a word like loch, a lake or inlet. One hears it in the “ch” of German Dach, roof, and Polish chɫop, peasant; in the Russian letter “х” or kha, as in khorosho, good; in the Greek χ or Chi of χρονος, time; in the “g” of Dutch gebak, pastry; in the “j” of Spanish jardin, garden; and in still other languages. One of these is Yiddish, in which it is ordinarily represented by the Hebrew letter כ, known as khaf and usually transliterated in English as “kh.” (In professional linguistic discourse, this is often replaced by χ.)

But biblical Hebrew also had another phoneme: a voiceless pharyngeal fricative not found in any European language. Its symbol is the ח or Ḥet, and it is articulated by tightening the pharynx, the muscular tissue at the top of the throat behind the uvula, so as to constrict the flow of air exhaled through it. (When unconstricted, this flow produces an ordinary “h.”) The result is a breathy rasp that might cause one to think the speaker is choking were it not that it lasts but a fraction of a second.

And it is with this rasp that, in ancient times, the Hebrew word ḥanukah began. In linguistic notation it is commonly represented, as I have just spelled it, by an “h” with a dot under it, a usage you have often seen in this column.

Nor is it just a matter of ancient times. The “ḥ” phoneme is found to this day in all dialects of Arabic—and for that reason it continued to exist in the Hebrew of all Jews living in Arabic-speaking lands, including the over 600,000 of them who immigrated to Israel in the years after 1948. Jews from Iraq, Yemen, Egypt, Algeria, Morocco, and elsewhere pronounced the ḥet—and thus, the word Hanukkah—with the same voiceless pharyngeal fricative used by their biblical ancestors.

In Europe, however, this was not the case. No European language has such a phoneme, and therefore it was lost by European Jews, whose Hebrew pronunciation was affected by the languages of the countries they lived in. In nearly all cases, the “ḥ” was assimilated in Europe to the voiceless uvular fricative—that is, to the khaf. Thus, for example, if one takes the Hebrew word for “wise,” its first two consonants were kept distinct by Middle Eastern and North African Jews, who said ḥakhám, but were pronounced identically by European Jews, whether as khakhám in southern Europe or khokhόm in Eastern Europe, which in Yiddish became khόkhem.

We’re now in a better position to understand what happened with H(Ch)anukkah. Though spelled with a ḥet, the name of this holiday was pronounced with a khaf by the Ashkenazim who constituted the overwhelming majority of Jewish immigrants to the United States from the mid-19th century on. And because, in languages known to these immigrants like German and Polish, the khaf phoneme was represented by “ch,” they adopted the spelling of Chanukah in English, which then became general usage.

But this posed an obvious problem. “Ch” in English is pronounced “tsh,” and while American Jews knew better than to say “Tshanukah,” non-Jews often embarrassingly did not. By the mid-20th century, therefore, Chanukah was increasingly being replaced by Hanukkah. True, Hanukkah, when pronounced with an initial “h,” is not the way Jews say it, either, but the “h” phoneme is far closer in sound to “kh” than it is to “tsh,” and “Hanukkah” does not sound laughable or absurd to a Jewish ear in the same way that “Tshanukah” does.

In Israel no one says hanukah, but one hears ḥanukah less and less frequently, too. Khanukah is the norm. The biblical voiceless pharyngeal fricative, which survived in the Hebrew of Middle Eastern and North African Jews for thousands of years, has all but disappeared as their Israeli-born descendants have switched to the voiceless uvular fricative of standard Israeli speech, whose phonetic rules were laid down by European Jews arriving in Palestine in the first waves of Zionist immigration in the late 19th and early 20th centuries.

For a while after Israel’s establishment, a coalition of language purists and anti-Ashkenazi ideologists fought to keep the “ḥ” alive, and as late as the 1970s it still could be heard, not only from immigrants from Arab lands and some of their children but also from radio newscasters and occasional public speakers. Those days, however, are now gone.

A happy H(Ch)anukkah to all!

More about: Hanukkah, So many ways to spell Hanukkah