What Ruth Bader Ginsburg’s Online Mourners Got Right and Wrong about Jews, Death, and the Afterlife

When news of the Jewish justice’s death spread last week, so did a lot of weird claims about how Jews should mourn and what they believe. It’s time to clear things up. 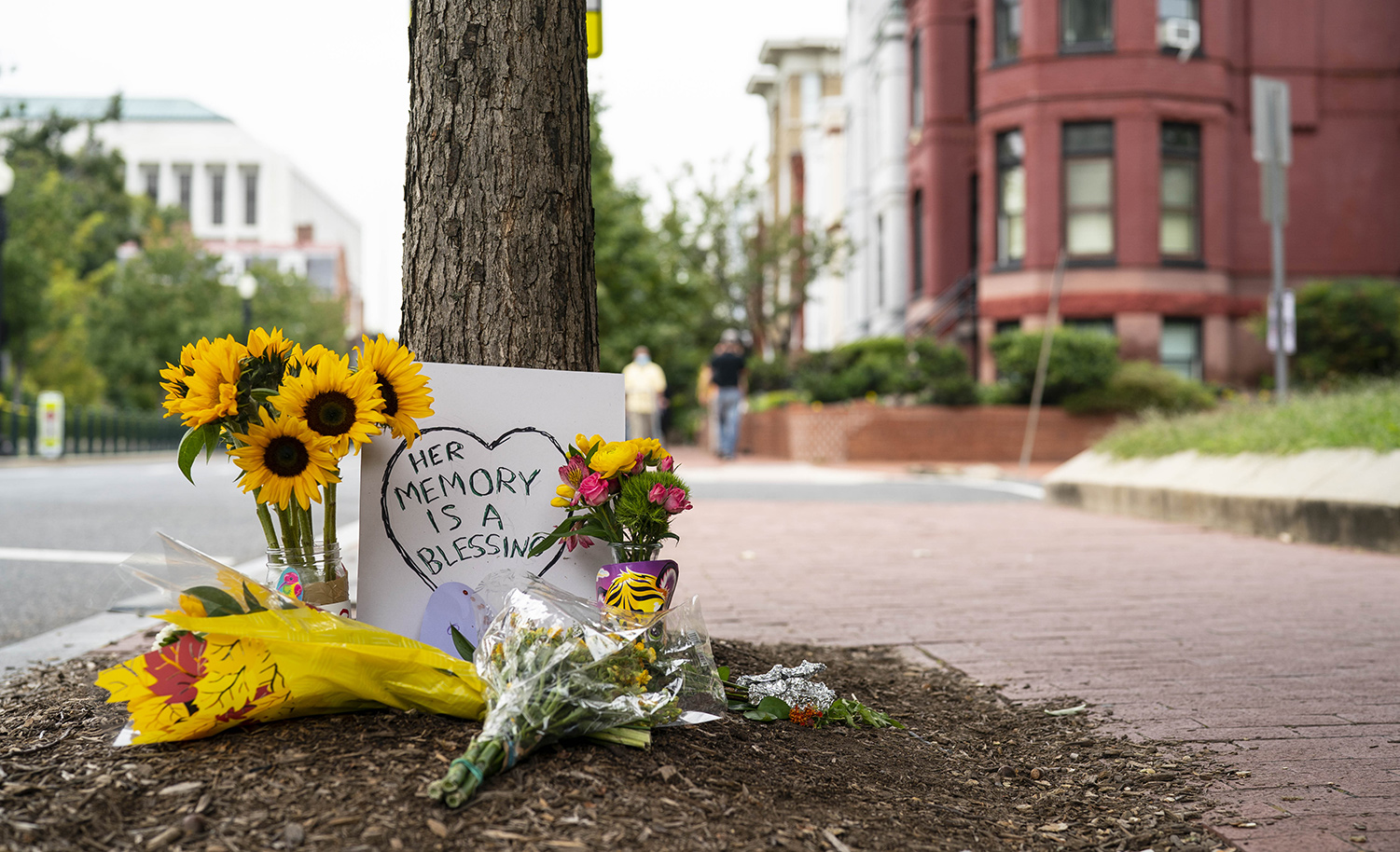 A memorial outside the Supreme Court where Justice Ruth Bader Ginsburg lies in repose on Thursday, Sept. 24, 2020. Sarah Silbiger/Bloomberg via Getty Images.

Opening my computer after the end of Rosh Hashanah this past Sunday, having seen a headline about her death on a newspaper on the street over the holiday, I expected to find tributes to Ruth Bader Ginsburg’s accomplishments and legacy, as well as projections about the political battle I knew must be brewing in its wake. All this I found and more, much of which I was not expecting, namely the bevy of questionable claims on behalf of “Judaism” that had gone viral while I was logged off. A high-profile Jewish person had passed away—one of the most powerful Jewish people in the country—on one of the most significant days on the Jewish calendar. So it makes sense that those spending Rosh Hashanah on their computers would spread Jewish ideas in connection with her passing.

The nature and accuracy of those ideas were also hotly debated; indeed, they still are. And this debate in turn shows us several things about the vibrant but little-examined Jewish life that sprouts up on social media, about what Jews believe death means, and about well-meaning American Jews, often eager to assert their identity, even as they may be ill-informed of their own tradition, as well as the overactive instinct to censure them among those who know—or think they know—better.

Let’s start by saying that some of the material on Ginsburg’s death was helpful, like the many annoyed objections to the recitation of the hymn “Amazing Grace” outside the Supreme Court by some of Ginsburg’s admirers. The use of such an explicitly Christian prayer to honor a proud Jew like her would seem to be offensive, or at least tasteless, these objectors pointed out. Here we can say that “clap-backs” like these—as such posts are sometimes known—are valuable in asserting Jewish tradition in the face of those who threaten to elide it, whether by intent or by negligence (even if we can also acknowledge that the singers of “Amazing Grace” were giving voice, in their own language, to a sentiment that is meant to be sympathetic rather than antagonistic).

But some of the other things people howled about seemed a bit more perplexing, and this is what I mean to focus on. Some objected to the use of the felicitous phrase “RIP RBG,” or other invocations of the term “rest in peace” with regard to the departed justice. Wrote one outraged Tweeter: “PSA: For those mourning the loss of RBG, be mindful that she was Jewish, so instead of saying ‘rip’ or ‘heaven gained another angel’, say ‘may her memory be a blessing.’ Jews don’t believe in the Christian afterlife. We really lost a legend on erev Rosh Hashanah. ברוך דיין האמת.” (The last phrase, barukh dayan ha-emet, or “blessed is the true judge,” is traditionally said on hearing news of a death, but has also in this case been used to refer playfully to the judicial chops of the departed.)

I’m not sure there’s anything actually wrong with what this person is criticizing. While “may her memory be a blessing” is indeed the more traditional phrase, one that Justice Elena Kagan expressed in her own note of condolence, there is nothing Jewishly objectionable in offering wishes that Ginsburg “rest in peace.” Indeed, the Jewish prayer traditionally recited for those who have passed, El Maley Raḥamim, explicitly wishes that the departed yanuḥu v’shalom al mishkavam, “rest in peace on their bed,” an echo of Isaiah 57:2. Even if you grant that the term “rest in peace” does have a long history of being used on Christian and particularly Catholic gravestones (presumably based on its biblical resonance), it has lately taken on a much more generic and non-theological use in contemporary English. So it’s hard to call the phrase “rest in peace” offensive or anti-Jewish, given both the presumably secular intentions of the speaker and the clearly Jewish resonances of the term.

While some people were objecting strongly to claims about what Ginsburg might have been doing at the moment—resting—others were griping about claims as to the next putative stage of her posthumous journey—namely, heaven. “(again, seeing a LOT of posts about ruth bader ginsburg [sic] arriving in heaven, a concept that she as a jewish [sic] person would not have believed to exist),” went one widely liked example. Leaving aside the certainty with which this person intuited the dead Ginsburg’s personal views about theology: sure, Judaism definitely does not reflect a perspective identical to the Christian notions of Heaven and Hell, but there are at the same time many sources in Jewish tradition that discuss the experience of the soul after death, and how it might be rewarded or punished based on how a person lived her life. Let’s spend a minute on this subject, because it’s one that also implicates popular but shallow notions about Judaism’s focus on life over death.

While in the modern period some Jewish philosophers and denominations have questioned the idea of the existence of the soul after death, the main thrust of Jewish theology from the Talmud on has been to accept some idea of postmortem existence. It is hard to ignore talmudic sources as explicit as Rosh Hashanah 17a: “The rebellious Jews who have sinned with their bodies and also the rebellious people of the nations of the world who have sinned with their bodies descend to Gehenna and are judged there for twelve months. After twelve months, their bodies are consumed, their souls are burned, and a wind scatters them under the soles of the feet of the righteous.” And although there are creative reinterpretations of some sources, and debates about whether the “World to Come” is physical or only spiritual, the traditional Jewish view on heaven is very clear: Kabbalists and rationalist philosophers alike agree that the soul lives on in the next world, luxuriating in the presence of the Divine.

With that history in mind, “reminders” that “Jewish tradition does not believe in Heaven” can only be true if one rewrites Jewish tradition so as to erase nearly all pre-modern sources. One might say that these clap-backs have gone a bit too far in their zeal to honor Jewish tradition. Even a more modest assertion some have made, that “Judaism does not focus on the afterlife,” is also overly sweeping in purporting to speak for all of the religion. Whether Judaism’s primary focus is on the afterlife or on life in this world is actually one the great debates across Jewish thought. Representative of one view is the 18th-century Italian rabbi Moshe Ḥayyim Luzatto’s channeling of the talmudic idea that “this world is but an antechamber” to the true living of the world to come; representative of another is the great 20th-century rabbi Joseph B. Soloveitchik’s claim that when a man’s “soul yearns for God, he immerses himself in reality” rather than yearning for the world to come. Needless to say, the many views on both sides of this issue are too complex to boil down into Tweet-length theology.

Perhaps the most perplexing bit of Jewish wisdom shared in the wake of Ginsburg’s passing, which was announced at the outset of Rosh Hashanah, is the purported teaching that a person who passes on Rosh Hashanah is a tsadik/tsadeket, “a good and righteous person.” Despite the fact that many otherwise reasonably knowledgeable Jews have asserted this “teaching” of “Jewish tradition,” its basis is far from clear. One writer cited to this effect the Torah T’mimah, a major 20th-century commentary, then later redefined his citation as a “creative (mis)reading,” helpfully demonstrating how the interest in finding a Jewish source for emotionally validating material outstrips any such source’s actual existence.

Maybe the closest thing to a successful source identification was the assertion that those who die on the eve of Rosh Hashanah are righteous. This was made in light of the talmudic teaching (Rosh Hashanah 16b) that on this holiday God judges everyone to life or death for the year to come. Without stretching things too much, one might reasonably speculate—although no source was actually provided for this interpretive move—that God holds on to those who are righteous but are nevertheless destined to die in a particular year until the very last moment. Of course, this would mean that Ginsburg had been judged the previous Rosh Hashanah; it would also require that Ginsburg’s passing had occurred prior to this year’s Rosh Hashanah rather than on the holy day itself (the exact timing of her death has not been publicly announced), which is the opposite of the primary “teaching”—to judge at least by the number of likes, shares, and retweets, the metrics of any social-media theology—that dying on Rosh Hashanah itself is a sign of righteousness.

Ironically, the seeming serendipity of a Rosh Hashanah passing may have led the Jewish Twitterati to overlook a far clearer and more basic source attesting to her righteousness: The Talmud’s assertion at Tractate K’tubot 103b that those who die on the eve of Shabbat are righteous, a teaching that has drawn far less attention than the ersatz source about the righteous passing away on Rosh Hashanah.

So, while it would be nice to have the timing of the death of a leading Jew be meaningful in some way, it doesn’t help anyone to invent Jewish teachings out of whole cloth, or to misrepresent sources in the interests of honoring them. Conversely, while Twitter clap-backs might be some peoples’ idea of Rosh Hashanah fun, let’s save our objections for when there is something truly objectionable. Or, as one Facebooker put it, let’s try not to be weird when a famous Jew dies. In the meantime, may RBG’s memory be for a blessing, may she rest in peace, and may she see her good deeds rewarded in heaven, in whatever precise form that takes.

What Ruth Bader Ginsburg’s Online Mourners Got Right and Wrong about Jews, Death, and the Afterlife