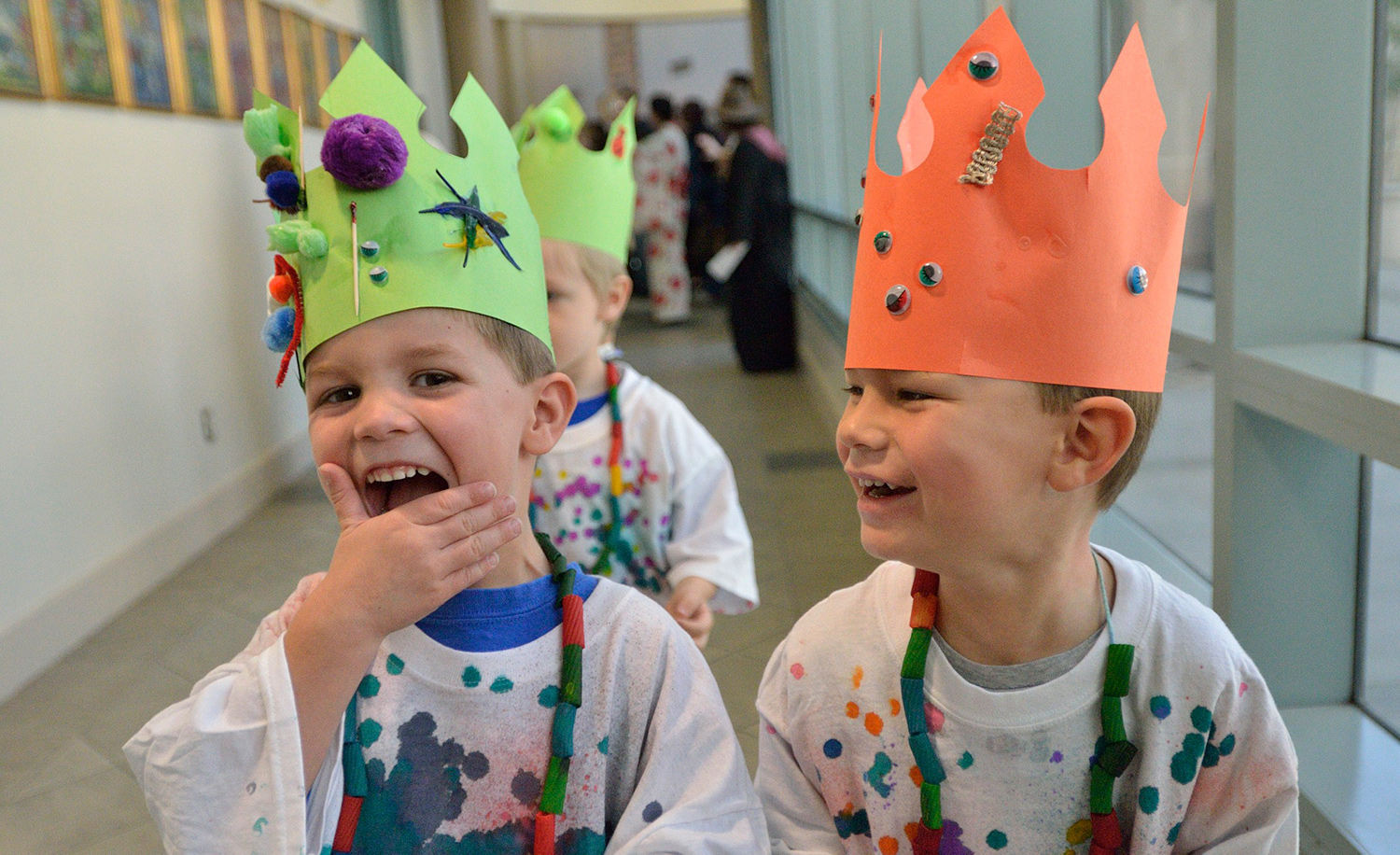 Two boys share a laugh at the end of a Purim parade at the Alpert Jewish Community Center in Long Beach, Calif., on March 9, 2012. Jeff Gritchen/Digital First Media/Orange County Register via Getty Images.

My father, a Judaic scholar and a stickler for correct Hebrew, always scolded anyone who greeted him with ḥag same’aḥ, “happy holiday”—or as American Jews more commonly spell it, chag sameach—during ḥol ha-mo’ed, the intermediate days of Passover and Sukkot. The right expression, he told the greeter, was mo’adim l’simḥah, “[May] Sacred times [be] for happiness.” Only the first and last days of the holiday, he insisted, were true ḥagim, days whose customs of lighting candles, reciting the Kiddush, and abstaining from travel, work, and commerce resembled the Sabbath’s, and ḥag same’ah should be reserved for them alone.

Ḥol in Hebrew means “non-sacred” and a mo’ed is a sacred time, so that the two words when joined yield the seemingly oxymoronic “non-sacred sacred time.” Yet this has been the term for the middle days of Sukkot and Passover since the early rabbinic period, and though my father’s strictures—or at least such is my impression—are more widely hearkened to today than they were when I was young, many American Jews and most secular Israelis continue to say ḥag same’aḥ not just on the holiday’s opening and closing days but on ḥol ha-mo’ed as well.

I was thus surprised not long ago to come across a 2013 communiqué of Israel’s Hebrew Academy of Language from which I learned that not only did the ignorant ḥag same’aḥ sayers (as my father thought of them) lack the backing of Jewish tradition; my father did, too. As a holiday greeting, it turns out, ḥag same’aḥ is barely 100 years old! In illustration of this, the communiqué referred its readers to a 1928 leaflet issued by the Academy’s forerunner, the Hebrew Language Committee of the Palestinian Yishuv, on the subject of “[Hebrew] Greetings and Polite Expressions.”

I managed to find the 1928 leaflet. In the 1920s, the spoken Hebrew revival was only several decades old. The Hebrew-speaking public, so it was felt, still needed close guidelines, and the Hebrew Language Committee, an august body boasting intellectual and literary luminaries like Ahad Ha’am, Ḥayyim Naḥman Bialik, and Shmuel Yosef Agnon, sought to provide them. Those it laid down for greetings and their appropriate responses were divided into such categories as everyday encounters; mealtimes, weddings, and funerals; Jewish holidays, and the like. For the three major holidays of Passover, Shavuot, and Sukkot, the Committee recommended two acceptable sets of greeting-and-response. One was:

The other set was:

Greeting: Tizku l’shanim rabot, “May you be granted many years!”

Response: Tizku v’tiḥyu v’ta’arikhu yamim! “May you [too] be granted [them] and may you live a long life.”

Alternate response: N’imot v’tovot! “[May they be] Good and pleasurable ones!”

The first of these two exchanges was traditionally Ashkenazi; the second, Sephardi-Middle Eastern. Ḥag same’aḥ was part of neither. Why not? Because, further research established, it was a relatively new expression that had entered Palestinian speech as the Hebrew equivalent of the traditional Yiddish holiday greeting of gut yuntif. (Itself an oddly redundant expression, this combines Yiddish gut, “good,” with yuntif, a Yiddishized form of rabbinic Hebrew yom tov, a “good day” or holiday, so that the combination literally means “a good good day.”) Although ḥag same’aḥ must already have been in use in the 1920s, the Hebrew Language Committee chose to ignore it, just as it ignored other Yiddish-derived expressions that it frowned upon for being un-Hebraic in spirit. By then, for example, Palestinian Jews had long been saying “good morning” by means of boker tov, the translation of Yiddish gut morgn universally used by Israelis today. Yet Ahad Ha’am, Bialik, Agnon, and their colleagues decided to overlook it and to recommend the supposedly more authentic but stilted barukh yomkha (“Blessed be your day!”), which may never have crossed an actual Hebrew speaker’s lips in either antiquity or any other time.

Yiddish’s yuntif is Hebrew’s ḥag, Sukkot and Passover’s first and last days that are called by the Bible mikra’ei kodesh, “holy convocations.” On ḥol ha-mo’ed Yiddish has a different greeting: a gutn moyed. And yet in the past, neither a gutn moyed nor mo’adim l’simḥa seem to have been widely used on ḥol ha-mo’ed. This can be seen from Ḥemdat Yamim, a popular and oft-reprinted book dealing with the Jewish ritual year, first published anonymously in Izmir in 1731, that has been variously attributed to its publisher, the kabbalist Yisrael Yaakov al-Ghazi, to Nathan of Gaza, the chief apostle of the false messiah Shabtai Tsvi, and to other authors. In a chapter on Sukkot, Ḥemdat Yamim enjoins the worshiper returning from synagogue on ḥol ha-mo’ed:

When one enters one’s home, one should hasten to say mo’adim l’simḥa in a loud voice just as one does on the first day [yom tov} of the holiday. Moreover, one should say this to family and friends whenever meeting them by day or by night, for these days [of ḥol ha-mo’ed] are sacred days of the Lord and those who greet each other on them as if they were ordinary days of the year hold the sacred times [ha-mo’adot] in contempt.

Izmir was at the center of the Sephardi Jewish world and had close contacts with both Ashkenazi Europe and the Jewry of the Middle East, so that the author or publisher of Ḥemdat Yamim was familiar with the customs of all three of these communities. It is reasonable to assume, therefore, firstly, that it was far from the general practice in any of them to use a special greeting for the days of ḥol ha-mo’ed, and secondly, that the greeting of mo’adim l’simḥa, which is today reserved for ḥol ha-mo’ed, was once used throughout the holiday with no distinction between its first, last, and middle days, just as ḥag same’aḥ is by many Jews today.

I suppose my father would have said that while every ḥag is a mo’ed, not every mo’ed is a ḥag. Mo’adim l’simḥa for the first and last days of Sukkot? Nothing wrong with it. Ḥag same’aḥ for ḥol ha-mo’ed? Out of the question! I’m not going to argue with that.