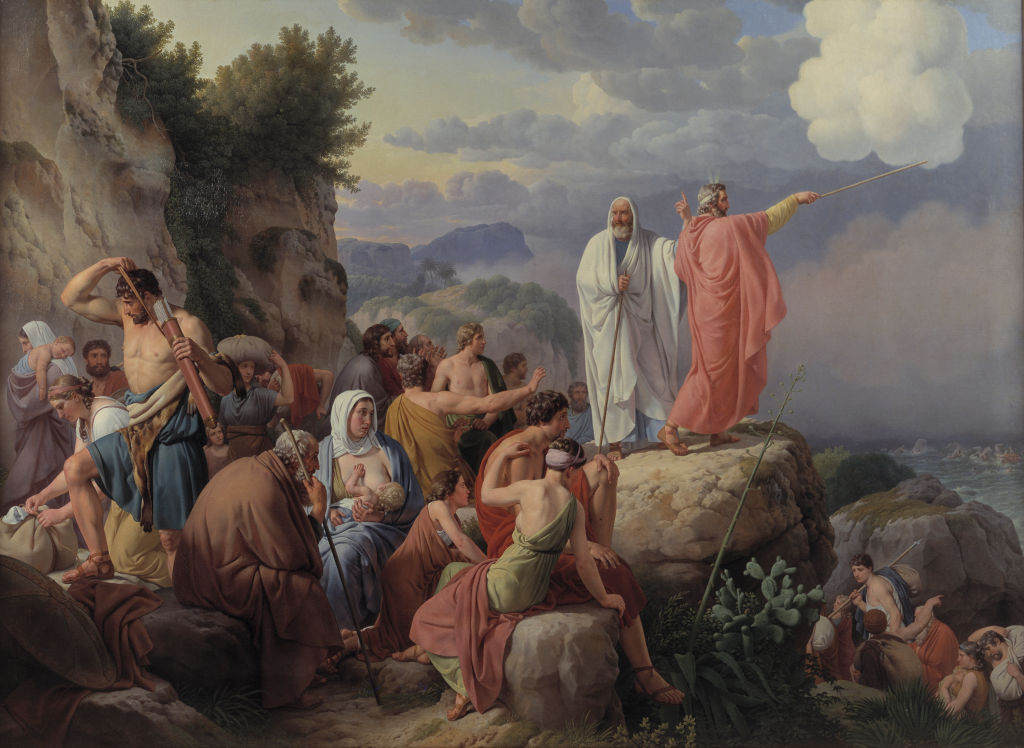 The Israelites Resting After the Crossing of the Red Sea, 1816, by the Danish artist Christopher-Wilhelm Eckersberg. Fine Art Images/Heritage Images/Getty Images.

That raises the question: is it even possible to learn from the Hebrew Bible without imposing one’s prior political and moral commitments upon it? The rabbi Shlomo Brody believes it is, and, in a recent essay for the new journal Sapir, he seeks to reclaim the Bible’s principles of social justice. In conversation with Mosaic‘s editor Jonathan Silver, he describes those principles, and then explains how a discerning reader can understand the Hebrew Bible’s intended meaning, and avoid imposing his own prior commitments upon it.

Tikkun olam can mean all sorts of things in contemporary discourse. A lot of times it can be something like “mending the world” or “repairing civilization,” some lofty overachieving goal, or sometimes it’s really equated with social justice. I think that tikkun olam is a very important concept and we should embrace it, but we really have to understand and define it the way that the sages utilized it. What they had in mind was something which is pretty different but quite important: the law always has to be looked at and examined in ways that ensure that the legal norms and the general norms and practices of society are able to implement the principles that the Bible cares a lot about. And so there are going to be times when we have to tinker with some of the laws, or sometimes we’re going to have to make more important or bigger or radical innovations in order to achieve these values, there are many different examples of both types in talmudic literature. But the point is that we’re going to always try to have our eye be keen towards what we can change to make things a little bit better in implementing these principles.

I think where people go wrong in the tikkun olam discourse today is that they assume that it has some particular orientation or notion of what justice is, one that’s a part of the contemporary parlance, and therefore needs to be implemented in a certain direction. But if you look in the Talmud, you’ll see that there are all sorts of debates on given examples of what tikkun olam is in some circumstance, what actually will make things better. People can disagree and should disagree about what policies are going to help us implement the principles that we want to build into our society. That’s why I think it’s very important to identify what the principles are that we’re trying to achieve, that we’re trying to live by as a society, and then we can disagree about how exactly we’re going to get to that. So tikkun olam doesn’t have some form of inherent content. Frequently it’s associated with the progressive left, but it just doesn’t mean that.