The Jewish Background of the Pentecostal Practice of Speaking in Tongues

According to the Talmud, when God handed down the commandments, he handed them down in every language at once. 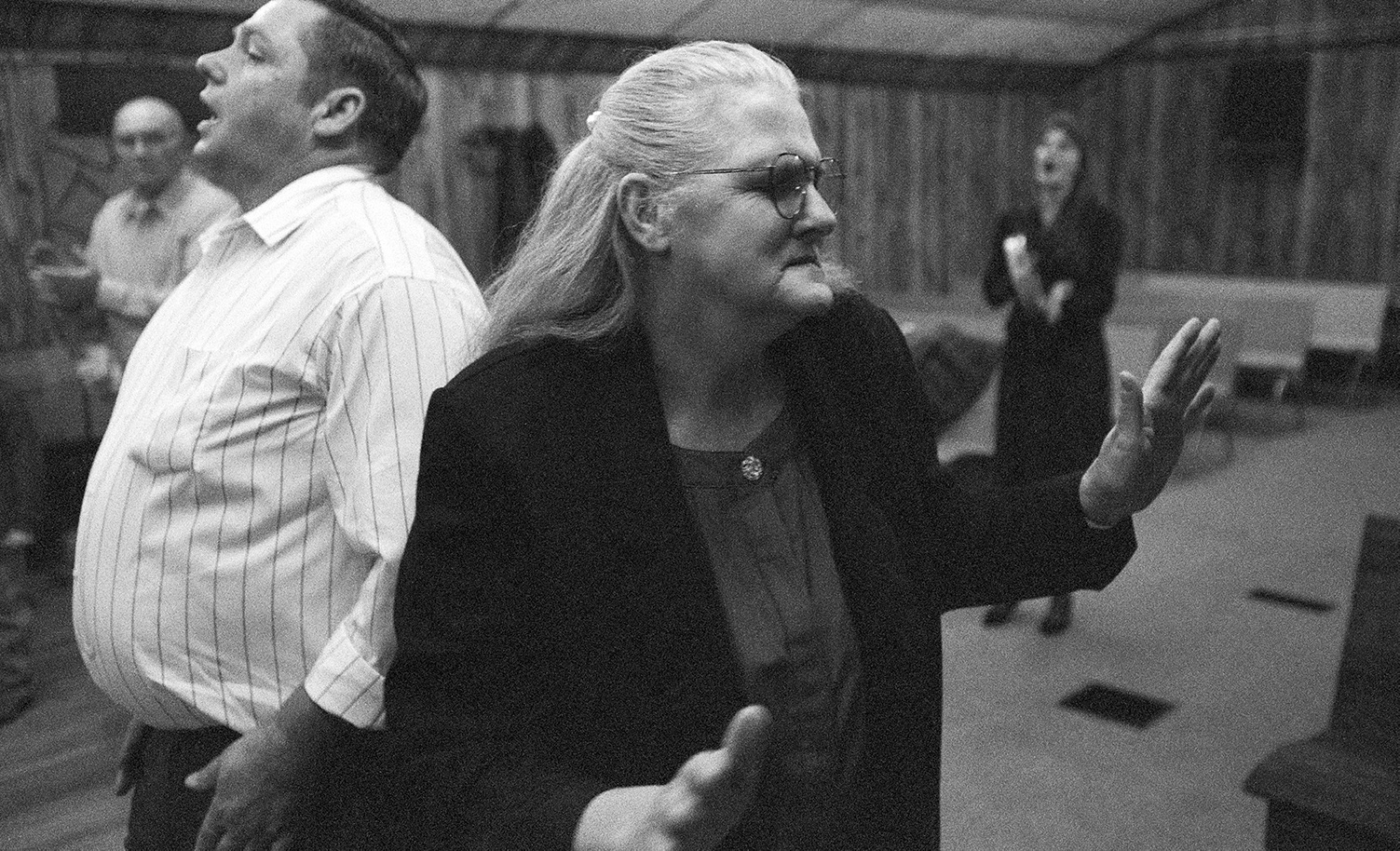 Worshiper at the Church of the Lord Jesus in Jolo, West Virginia in 1996. ANDREW HOLBROOKE/Corbis via Getty Images.

Last week was Shavuot, and this past Sunday was the Christian holiday of Pentecost that is linked to Shavuot. The word Pentecost, which is often used to denote Shavuot itself, comes from Greek pentecoste, “fiftieth” a reference to the commandment in the book of Leviticus to count seven weeks (shavu’ot) or 49 days from the second day of Passover and hold a “holy convocation” (mikra kodesh) on the 50th day. In Christianity, the 50 days ending with Pentecost are counted from Easter Sunday.

The English word “Pentecostal,” however, does not refer primarily to either the Jewish or the Christian holiday. Rather, it signifies any one of various Christian churches or denominations characterized by highly emotional prayer, ecstatic singing, dancing, and drumming, trance states, and what known as “speaking in tongues”—or to linguists, as “glossolalia” (from Greek glossa, tongue, and laleo, to talk or babble). Speaking in tongues is a practice that goes back to Chapter 2 of the New Testament book of Acts of the Apostles, which tells of the first Pentecost or Shavuot celebrated in Jerusalem by Jesus’ disciples, all Jews and Aramaic-speaking Jews from the Galilee, shortly after their teacher’s death. In the translation of the King James Version:

And when the day of Pentecost was fully come, they were all with one accord in one place. And suddenly, there came a sound from heaven as of a rushing, mighty wind, and it filled all the house where they were sitting. And there appeared unto them cloven tongues like as of fire, and it sat upon each of them. And they were all filled with the Holy Spirit, and began to speak with other tongues, as the Spirit gave them utterance. And there were dwelling at Jerusalem Jews, devout men, out of every nation under heaven. . . . And they were all amazed and marveled, saying one to another, Behold, are not all these which speak Galileans? And how hear we every man in our own tongue, wherein we were born?

The passage then relates how Jesus’ disciples spontaneously broke into comprehensible Persian, Phrygian, Coptic, Berber, Latin, Arabic, and still other languages, even though they themselves did not understand a word of what they were saying. When asked for an explanation of this, the group’s leader, Peter, is said by Acts to have quoted the verse from the prophet Joel, “And it shall come pass in the last days, saith God, I will pour out of my Spirit upon all flesh; and your sons and daughters shall prophesy, and your young men shall see visions, and your old men shall dram dreams.” The “last days,” Peter was saying, have arrived.

Yet in having Peter invoke a not terribly relevant biblical verse, Acts was, whether deliberately or not, overlooking the true background of what happened in Jerusalem. This was the rabbinic belief, of which Peter himself, an observant Jew, would surely have been aware, that when the Torah was given at Sinai—which was, according to Jewish tradition, on Shavuot—it was not just given in Hebrew. This belief was based on a midrashic interpretation of the plural noun kolot, “sounds” or “voices,” which, we are told by the book of Exodus, were heard amid the thunder and lightning that accompanied Sinai’s revelation. As stated by the talmudic tractate of P’saḥim:

Every commandment spoken from God’s mouth [mi-pi ha-g’vurah] was divided into 70 languages—so says the school of Rabbi Yishma’el, [who quoted the words of Jeremiah]: ‘As the hammer shatters the rock’—just as a hammer gives off many sparks [when striking a rock], so each commandment spoken by God was given in 70 languages.

“Seventy languages” is a rabbinic way of saying “all the languages of the world.” Clearly, this midrash is what lies behind the apostles’ alleged ability to speak all these languages at their Shavuot gathering (presumably, for holiday prayer) in Jerusalem; no less clearly, too, the “tongues of fire” and “sound from heaven of a rushing, mighty wind” are allusions to the lightning and thunder by which Sinai, according to the account in the book of Exodus, was enveloped. The Shavuot in Jerusalem, in other words, is seen by the New Testament as a symbolic restatement of the theophany at Sinai, one in which the new Christian gospel was revealed to the entire world as the Torah, according to the midrash, was at the time of the exodus.

True, such an interpretation can be challenged on chronological grounds. Acts of the Apostles was written in the 1st century CE, while the passage in P’saḥim dates to the 4th or 5th, and it can be claimed that its exegetical reading of Exodus was unknown hundreds of years earlier. Yet Rabbi Yishma’el, whose students are quoted by P’saḥim, lived in the early 2nd century and could well have been reflecting an even older exegetical tradition. Obviously, there is a connection between the midrash in P’saḥim and the story in Acts, and it is far more plausible to assume that the former influenced the latter than vice versa.

Although there is evidence of glossolalia being practiced in ancient pagan religions as a way of letting the divine speak through human throats, it has been primarily associated in history with Christianity—and not with all Christianity, either, because after early Christian times there is little indication of its existence until the Protestant Reformation, some denominations of which revived it until it became widespread among Pentecostals in the 20th century. In many Pentecostal churches, speaking in tongues or “the gift of tongues,” as it also is called, is considered an ultimate sign of divine grace. Those to whom it is granted are not viewed as engaged in an act of their own volition. They are thought to be possessed by the Spirit of God, which is speaking through them

Linguistic research on glossolalia, of which there has been a fair amount, shows that its involuntary nature is only partial. While those speaking in tongues can emit rapid-fire sequences of sounds that have all the intonations of actual speech and may sound remarkably like it, none has ever been recorded talking in a real language previously unknown to him; all true glossolalia is gibberish. Moreover, its speakers never utter sounds that do not already exist in the languages they do know; in creating what may seem on first hearing to be a genuinely unfamiliar tongue, they are drawing entirely on phonetic options that are familiar. And finally, the latest neuroscience has shown that the “languages” they converse in are not produced in the language centers of the brain but in a part of the left frontal lobe associated with willed activity and multitasking.

This is not to say that speakers in tongues are necessarily faking it, although many may be. Genuine trance states that manifest themselves in glossolalia are real. Yet those subjected to them are stringing together mere sounds that have no discernible vocabulary or grammatical structure. Once, many years ago, my then nine-month-old daughter astonished some dinner guests by delivering a lengthy lecture in baby talk that sounded for all the world as though she were talking in a language all her own. Poetically speaking, she may have been, but it was really just amazingly fluent babble. So no doubt were the Persian, Phrygian, Coptic, Berber, and Arabic spoken by Peter and his fellows in Jerusalem.

The Jewish Background of the Pentecostal Practice of Speaking in Tongues