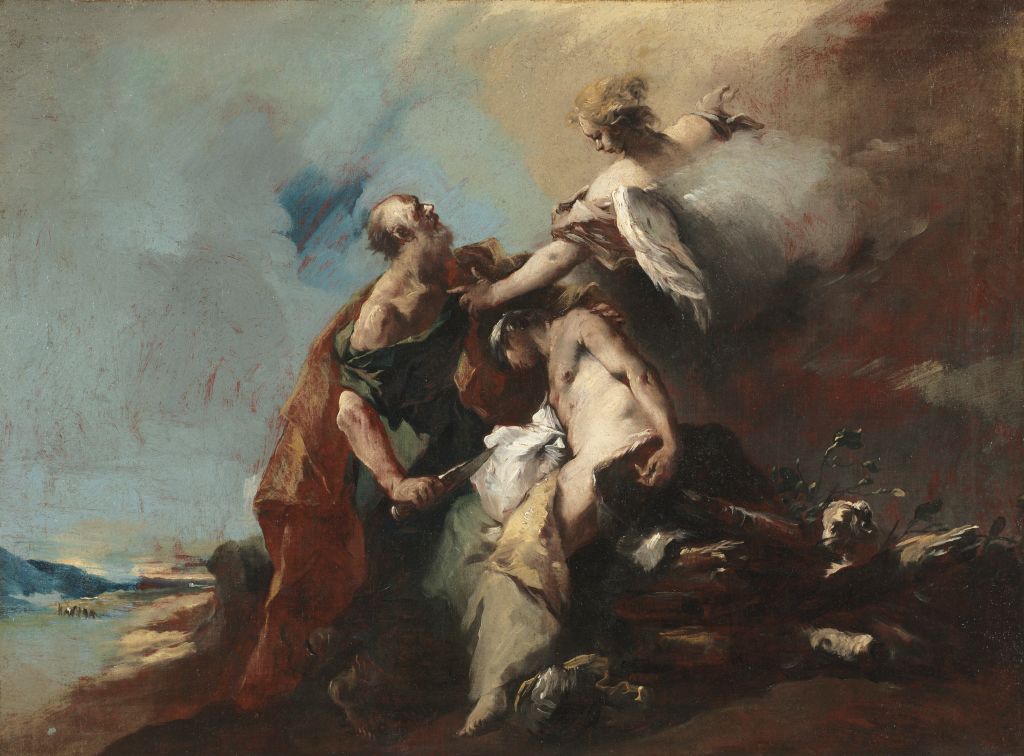 The Sacrifice of Isaac, 1750s, by the Italian artist Andrea del Sarto. Photo by Heritage Arts/Heritage Images via Getty Images.

There’s a distinction often made between two common approaches to the human longing for wisdom. The first approach, philosophy, is considered the unassisted search for wisdom and truth, one that requires boldness, curiosity, and perhaps even impiety; it requires the philosopher to ask questions that can unsettle the customs and social habits on which any decent society depends. The second approach, biblical religion, on the other hand, is the product of revelation, of God’s disclosure to Moses and mankind the ways of creation and righteous living. The biblical desire to know requires submission and deference to an authority beyond all human pretensions, an authority that knows the human heart better than humans themselves do. Philosophy appeals to human reason; scripture appeals to divine revelation. They’re two fundamentally different modes of understanding, learning, and living.

This week’s podcast guest argues that this oft-drawn distinction between reason and revelation is all wrong. Dru Johnson is a professor at The Kings’s College in New York City, director of the Center for Hebraic Thought, and the author of a new book, Biblical Philosophy: A Hebraic Approach to the Old and New Testaments. In the book, Johnson argues that, beginning in the Hebrew Bible and extending even through the Christian New Testament, the Bible has a coherent manner of seeking out wisdom that bears all the distinguishing characteristics of a text with philosophical depth. Just like the Greek tradition, biblical philosophy is a distinct intellectual tradition that has its own answers to a great many of the pressing questions of mankind. Curious? Join him and Mosaic’s editor Jonathan Silver to learn more.

If you say the word faith in New York City and you go down the street and ask people what faith means, they’re going to say closing your eyes and stepping off a cliff or believing in things when you have no reason to believe in them. I ask that even of my freshman classes when we’re reading the Hebrew Bible, they’ll say very similar things, and I’ll say OK but get ready: we’re going to read story after story after story where people don’t trust God and He keeps coming back to them and giving them reasons to trust Him, and even then they still push back sometimes.

If you think about the call of Abraham―Abram at that point―or Moses or Gideon, these very famous figures, God comes to them, they say, “No God, I’m not your guy,” but He comes back again and again and gives them reason after reason. There’s nothing like that in ancient tradition where you have a God who has that power and perspective and plan who comes down and flat-out reasons like He’s a fellow human being. That God takes our need for voracious trusting as a part of our thinking in the world, as shown in Genesis 15, where God says He’s going to give Abraham the land to possess, and he says, “How can I know that I shall possess it?” And God says, “OK bring some animals,” and He says, knowingly, “you shall know that I’m going to give this land for your children to possess it,” and then He makes a covenant with him on that day.

I was just talking to a systematic theologian. In Christian theology they typically call this accommodation, that God is accommodating us―he’s infinite, we’re finite. I don’t think that’s quite right. He [the theologian] gave me this other word he’s been using, that it’s fitting that we’re His creation, this is how He’s made us, He’s made us to be reasoned with, and it’s fitting that He reasons with us. I still can’t find anywhere in Scripture where God just demands, out of the blue, no context, do this, jump, and he just expects people to say how high. It just doesn’t exist. So I think the nature of God-human interactions is already in the realm of what the Greeks are doing―it’s like a Socratic dialogue of sorts between God and humans. The personalizing of God in this context makes it feel like philosophy out of the gates.