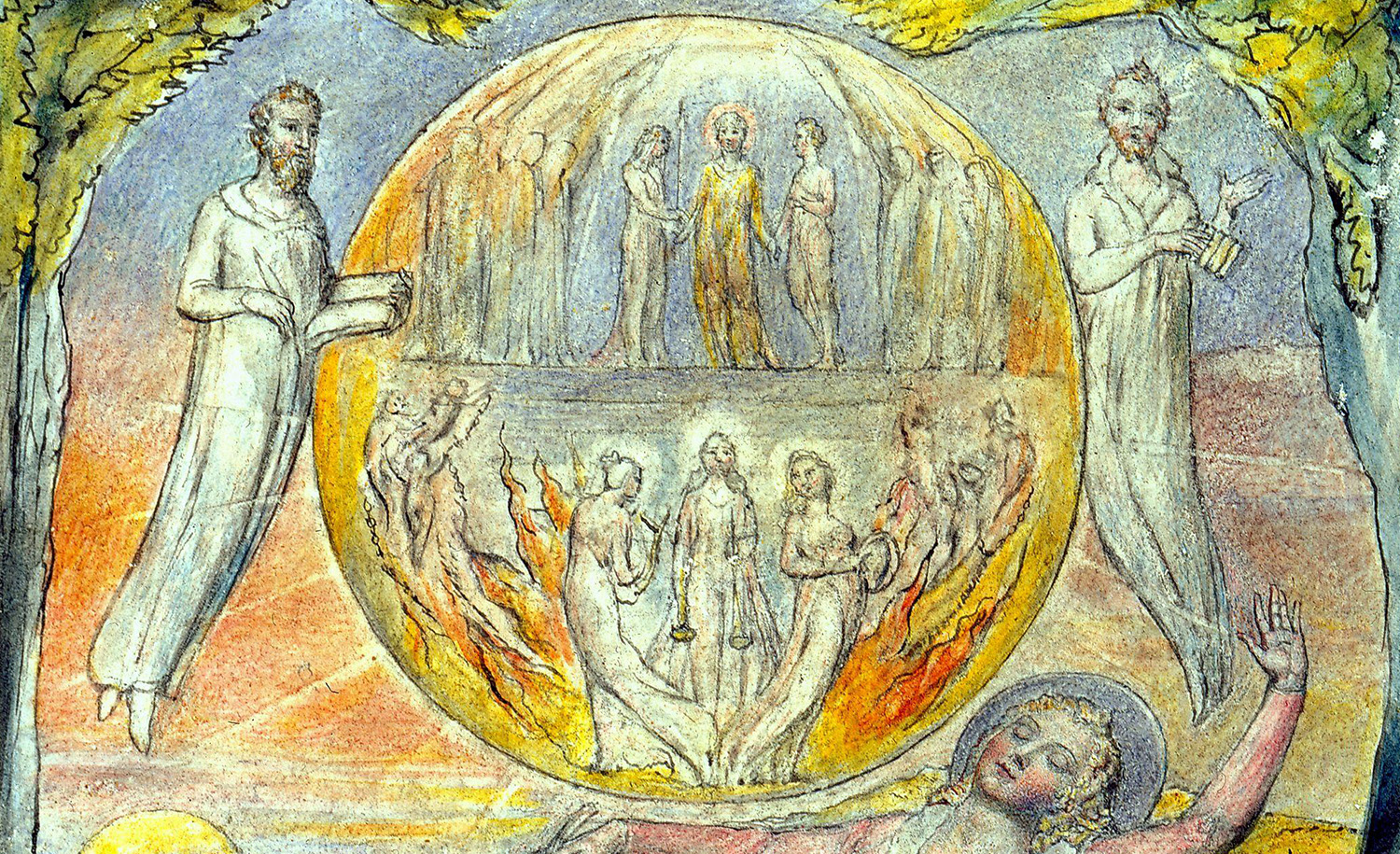 From “The Youthful Poet’s Dream” by William Blake. Wikimedia.

The Jewish calendar tells us that this Rosh Hashanah we’ll be celebrating our world’s 5,782nd birthday. What it doesn’t say, though, is precisely at what hour our world was born. Will its exact anniversary be this coming Monday night or this coming Tuesday morning?

The Bible is not very clear about this. Here are the opening verses of Genesis:

In the beginning God created heaven (shamayim) and earth (arets). And the earth was without form and void; and darkness (ḥoshekh) was upon the face of the deep. And the spirit of God moved upon the face of the waters (mayim). And God said, let there be light: and there was light. And God saw the light that it was good, and God divided the light from the darkness. And God called the light day (yom), and the darkness he called night (laylah). And it was evening (erev), and it was morning (boker), one day (yom eḥad).

On the one hand, since God’s first creative proclamation was “Let there be light,” it might seem that the first day preceded the first night. Yet on the other hand, the Hebrew Bible’s account says vay’hi erev vay’hi voker, “and it was evening and it was morning,” thus implying that the first night preceded the first day. Moreover, Jewish tradition, which rules that all Jewish holidays—indeed, all days of the Jewish year—start with sunset rather than with sunrise, would appear to agree with this.

Nor, ostensibly, is this a difficult position to reconcile with the biblical text. After all, we are told by the Bible that before God’s “Let there be light” came the creation of a heaven and an earth in which there was “darkness” (ḥoshekh). Shouldn’t this darkness be taken to be the first evening, which was then followed by the first “morning,” when God created light?

Read more closely, though, this isn’t quite what the Bible is telling us. Even after light’s creation, the Bible states, it and darkness were mixed, so that God had to separate them for day and night to come into existence. Is it then this mixture of light and darkness that should be thought of as the first erev or evening, which was followed by the first night or laylah and then by the first morning or boker? But the Bible doesn’t say vay’hi erev vay’hi laylah but vay’hi erev vay’hi voker—which sounds as though the first evening were followed by the first day without night intervening at all! And to complicate matters further, how could day and night have even existed at this stage, since Genesis also tells us that the sun did not shine in the sky until Creation’s fourth day?

This last question is one that the rabbis of the Talmud were well aware of and gave two answers to, both in the same passage in the tractate of Ḥagigah. There, we are told, Rabbi Ya’akov proposed that the light of Creation’s first three days was a divine light not dependent on the sun in which “one could see from one end of the world to the other” and which God “stored away” for messianic times after He created the sun. The more common opinion, says Ḥagigah, was that, although the sun was indeed created on the first day and was the source of its light, God waited for the fourth day to place it in the firmament.

The rabbis of the talmudic period thought in terms of narrative. Those of the Middle Ages often thought philosophically and sought to harmonize the Bible with the philosophical beliefs of their age. Thus, in his commentary on Genesis, Rabbi Moses ben Naḥman (1194-1270), also known as Naḥmanides or the Ramban, finds three of the four elements of medieval physics in the opening verses of the book—air (shamayim), earth (erets), and water (mayim)—and adds the fourth by interpreting the ḥoshekh of the “darkness upon the face of the deep” as a dark fire. This fiery ḥoshekh, Naḥmanides stressed, was not the same as the ḥoshekh of “and the darkness He called night,” which was simply the absence of light. (In assigning to the word a double meaning in a single passage, he could have cited the creation story’s similar use of yom, which refers in one verse to the daylight half of the 24-hour diurnal cycle and in the next verse to the entire cycle.)

According to Naḥmanides, therefore, the evening or erev of the biblical account cannot refer to the mixture of the first ḥoshekh and light. How, then, to explain vay’hi erev vay’hi voker? Naḥmanides cites two possible ways of doing it. One, which he proceeds to dismiss, is to argue that the light created by the fiat of “Let there be light” was the waning light of a day’s end that was immediately followed by evening, so that it did not count as a day. The explanation endorsed by him is not unlike Ḥagigah’s—namely, that the light separated from the darkness on the first day did not shine on the phenomenological world of the four elements until the sun was formed on the fourth day, prior to which it existed in a divine realm to which the material world was not exposed. The evening of vay’hi erev thus actually lasted three days. Faced with the question of how there could have been days at all if there was not yet a sun-based diurnal cycle, Naḥmanides argued that Time itself came into being with the creation of heaven and earth and did not need the sun’s movements to exist.

But although it was the prevalent rabbinic view that the first night preceded the first day, it was not a universally accepted one. The most prominent rabbi who rejected it was Shmuel ben Meir (1085-1158), a grandson of Rashi and one of the great Tosafists or early talmudic commentators. Known as the Rashbam, he wrote in his own commentary on Genesis:

Light always precedes darkness. Vay’hi erev vay’hi voker—the Bible does not say vay’hi laylah vay’hi yom, because [what happened was that] the first day turned to evening and the light vanished, so that when then dawn broke and morning followed night, the first day was completed and the second day began.

Although the Rashbam was careful to stress that this did not mean that the Sabbath and Jewish holidays should start with the break of day rather than with the fall of night, their onset being determined by halakhic principles that were not up for debate, there with those who felt that his position undermined the basic rationale of the Jewish calendar and were shocked by it. One of them was Rashbam’s contemporary, the poet and exegete Abraham ibn Ezra (1089-1164), who had, or claimed to have had, a dream-vision in the year 1154 in which he received a Sabbath-day missive from the Day of Rest itself, scolding him for not actively polemicizing against the Rashbam’s view.

“I, the Sabbath, the crown of our precious faith as declared in the Ten Commandments, and a sign of the eternal covenant between God and His people,” said this dream rebuke, “find fault with you in your old age, though you were faithful to me in your youth, for being silent when books were brought you in which it was written to desecrate the seventh day.”

The “books brought” to Ibn Ezra were clearly the Rashbam’s commentary on Genesis, for he continued:

And when I awoke in a great fright, I took the books and went outside to read them in the moonlight—and behold, in them was a commentary on vay’hi erev vay’hi voker in which it said that the first day [of Creation] ended with the dawning of the second day, because night always follows day. I almost tore my clothes [in mourning], and I did tear up these writings and vowed that I wouldn’t sleep a wink once the Sabbath was over before I finished writing an epistle of my own to explain the matter of [the commencement of] the day in the Torah.

To the best of my knowledge, Ibn Ezra never kept his vow. This is a shame because, being also an astrologer and astronomer, he might have had things to say about Creation that others didn’t. Even had he written such a work, however, we would still be unlikely to know whether the first night followed the first day or vice versa.

Whichever it was, a happy and healthy 5782 to you all!