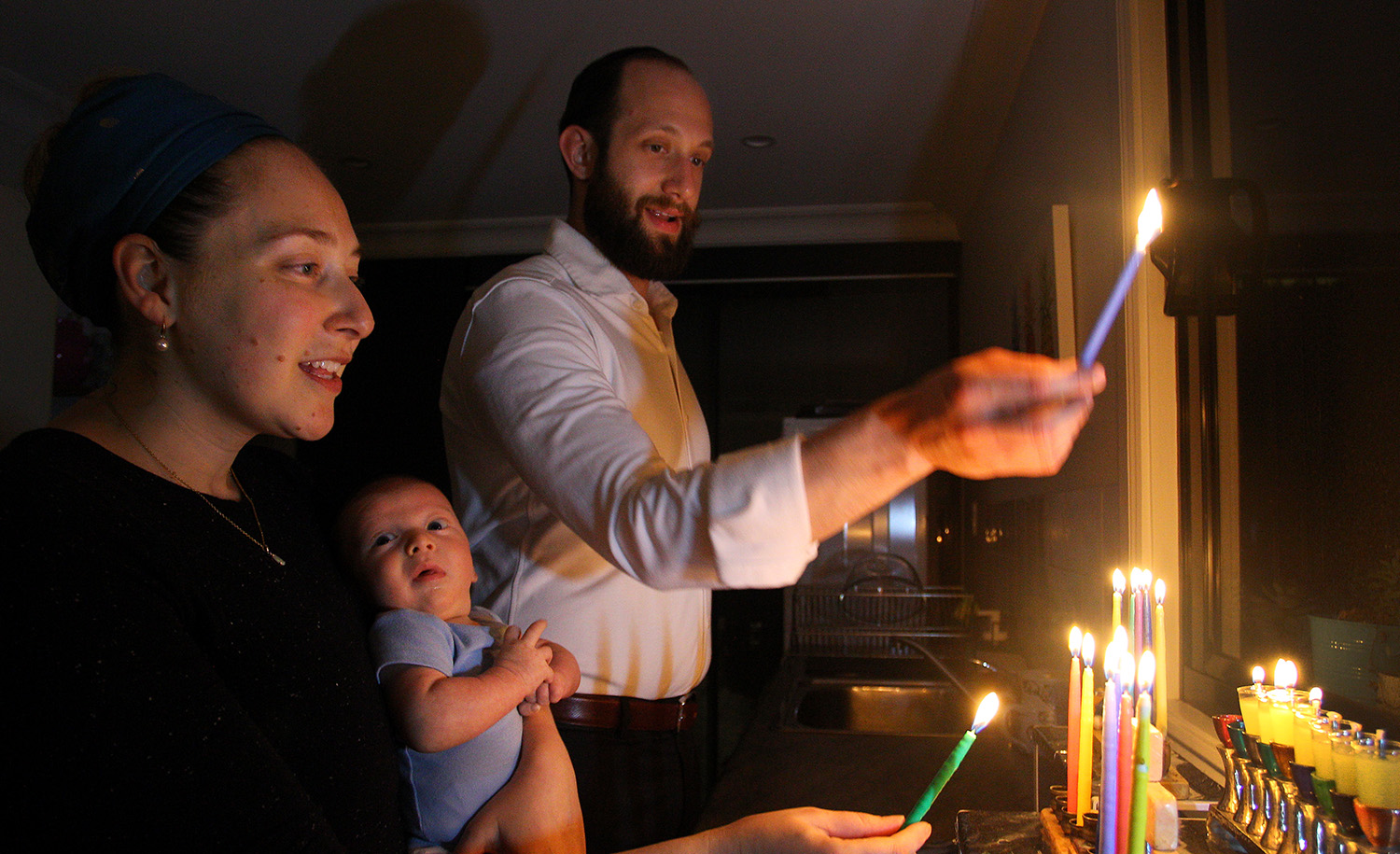 A family light their menorah at home on December 15, 2020 in Sydney, Australia. Lisa Maree Williams/Getty Images.

How many stanzas of the candle-lighting song Ma’oz Tsur Y’shu’ati are you familiar with? If you’re like most people who light Hanukkah candles, the answer is one. If you grew up in a home like mine, it’s two. If you’ve seen Ma’oz Tsur as it is generally printed in a non-Orthodox siddur, or some older Orthodox ones, it’s five. If you know its full story, it’s six—and it’s the sixth that is the most interesting.

But let’s start with the first, the one we all know. The late Rabbi Jonathan Sacks’s rendering of it in the compendious Koren Siddur (2009) that he edited and translated reads: “Refuge, Rock of my salvation,/ to You it is a delight to give praise./ Restore my house of prayer,/ so that there I may offer You thanksgiving./ When You silence the loud-mouthed foe,/ Then will I complete, with song and psalm, the altar’s dedication.”

Sacks’s version is not singable, since it lacks the metrics of the Hebrew stanza, which has four lines as opposed to Sacks’s six. Moreover, all four of these lines rhyme with one another, and the last of them—az egmor b’shir mizmor ḥanukkat ha-mizbeaḥ—has an internal rhyme as well, a pattern that is followed by the subsequent stanzas.

When, where, and by whom was Ma’oz Tsur written? The literary evidence dates its composition to late 12th-century Europe. (The melody to which most Jews of Ashkenazi descent sing it is old, too, and probably had Christian origins, although when compared with that of the Christian hymn it most resembles, Martin Luther’s Nun freut euch, lieben Christen g’mein, which can be heard on YouTube, it is similar only in its odd-numbered lines.) As for Ma’oz Tsur’s author, he wove his name into it as medieval Hebrew poets often did. Thus, the initial letter of the first stanza is mem, מ; of the second, resh, ר; of the third, dalet, ד; of the fourth, khaf, כ; and of the fifth, yod, י, together yielding מרדכי or Mordekhai.

Just who this Mordekhai was, however, remains conjectural, for the ח or ḥet with which the sixth stanza begins stands not for a last name or epithet but for the word ḥazak, “be strong.” Taken from the phrase ḥazak, ḥazak, v’nitḥazek, “be strong, be strong, and let us get stronger,” which is traditionally chanted by congregations upon finishing the last portion of a book of the Torah, ḥazak’s initial letter was sometimes used in medieval times to commence a poem’s last part.

This sixth stanza differs from the preceding ones in two other respects as well. One is that it is not found in the earliest surviving versions of Ma’oz Tsur and first appears in Jewish prayer books from the early 18th century. The other is that it does not tell of divine deliverance from a historical episode of oppression as do stanzas 2 through 5—stanza 2 of the liberation from enslavement in Egypt, stanza 3 of the return from exile in Babylonia, stanza 4 of the thwarting of Haman’s plot against the Jews, and stanza 5 of the Maccabees’ successful revolt that we celebrate on Hanukkah. (The last is the second stanza that was sung in my family, as it is in many others.) Stanza 6, on the other hand, expresses the hope for a future deliverance: in Sacks’s translation it reads: “Bare Your holy arm [ḥasof z’ro’a kodsh’kha] and hasten the time of salvation./ Take retribution against the evil nation/ on behalf of Your servants./ For the hour has been too long delayed; there seems no end to the evil days./ Thrust the enemy into the darkness of death/ and establish for us the Seven Shepherds.”

The image of “the Seven Shepherds” who will redeem Israel is taken from a prophecy in the book of Micah. But who is the “evil nation” from whose grip they will redeem it? The answer to this question is given in a kind of code.

This encryption is in the phrase that Sacks translated as “Thrust the enemy into the darkness of death.” In Hebrew this reads: D’ḥey admon b’tsel tsalmon. Yet while d’ḥey is indeed an imperative verb meaning “repel” or “thrust,” admon means not “the enemy” but “the red one.” (The word is constructed from the adjective adom, “red,” plus the nominalizing suffix –on.) Moreover, the alliterative combination of tsel tsalmon, whose literal meaning is something like “the shadow of dark death,” has in it a strong hint of the word tselem, “image,” which in the Bible often refers to a worshiped idol, and in post-biblical Hebrew, to the Christian cross. And if we also take into account that the kingdom of Edom, a word closely related to adom, came to refer in post-biblical Hebrew to the domain of Christianity, it becomes clear that the “evil nation” from which deliverance is hoped for is none other than the world of Christendom.

Given that the 11th and 12th centuries were a period in which Jewish fortunes in Christian Europe declined sharply and the Catholic Church assumed an increasingly anti-Jewish stance, the anti-Christian sentiment of stanza 6 is not surprising. Nor is the fact that this stanza, which was almost certainly part of the original Ma’oz Tsur, disappeared from the siddur and only surfaced—and even then in but a few editions—in the 18th century, at the time of the European Enlightenment. Even in its encrypted form, which was meant to prevent Christians from noticing it, it was dangerous, since the Church had baptized ex-Jews who were well-aware of the content of Jewish books. A degree of self-censorship had to be practiced, as it was with other texts, too. Indeed, even after stanza 6’s 18th-century publication it continued to be omitted even from most inclusive Siddurim, which concluded Ma’oz Tsur with stanza 5.

And here we encounter an irony, for Jonathan Sacks, in editing and translating a 21st-century siddur, found himself in a dilemma. On the one hand, he wished to do justice to the historical record and publish the long-omitted sixth stanza of Ma’oz Tsur. Yet on the other hand, although 21st-century Jews needn’t fear 12th-century persecutions, Sacks, a chief rabbi who was knighted and awarded a peerage by the British Crown, found this stanza embarrassing. His solution was not very different from Ma’oz Tsur’s: to publish and conceal simultaneously. Our Mordekhai did this by encryption, Sacks by deliberately fudging his translation. In effect, he was de-bowdlerizing and re-bowdlerizing the text at one and the same time. What is 21 if not 12 backwards?

Happy Hanukkah to you all!