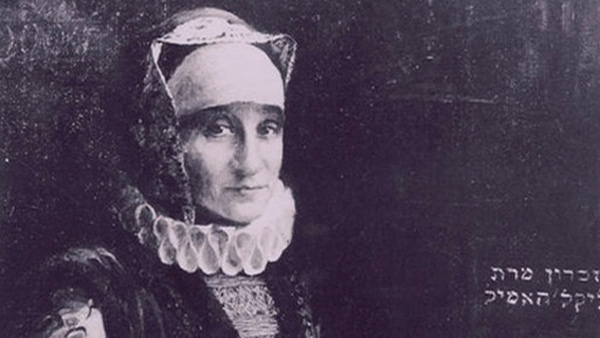 Gluckel of Hameln—not actually from Hameln.
Observation
Dara Horn
About the author


Dara Horn is the author of five novels, most recently Eternal Life.

Why, O Internet, do you keep doing this to me?

By “this,” I mean turning unsubstantiated nonsense into articles that are then smeared across the globe. And when the fun-filled piece-of-the-week concerns something related to Jewish culture—about which a few million Americans feel a sense of ownership, and millions more feel an intense curiosity, but remarkably few have any substantial knowledge—the phenomenon can multiply exponentially.

The latest in this genre is “Jewish Surnames Explained,” an article by Bennett Muraskin that appeared last November in the online magazine Jewish Currents, was picked up and further popularized a couple of weeks ago by Slate, and even found a spot among Mosaic’s daily listings of noteworthy items from around the web. According to Jewish Currents, not exactly a mass medium, the original piece attracted no fewer than 200,000 visitors; Slate’s posting has already garnered 79,000 “shares” on Facebook; and a quick Google search yields no fewer than 200,000 results for the title alone. All this, for an article that purports to explain the origins of a large number of common Ashkenazi family names.

If you are an American Jew who uses the Internet, I suspect that you, too, have already seen this article, and I even know how you found it or, rather, how it found you. It was sent by your friend, or your mom, or your friend’s mom, or you saw it on Facebook, or retweeted it on Twitter, or came across it republished elsewhere. I myself have been exposed to it at least three dozen times in the past six days, often accompanied by a tag or header: “Dara, you’ll love this!”

Actually, I don’t. Not because there’s anything illegitimate about the subject of Jewish names, or because linguistic and genealogical inquiry is a pointless endeavor. To the contrary: the immense attention paid to this article reveals the degree to which many American Jews are still fascinated to learn where they came from. Unfortunately, it also reveals how the members of a group so highly educated in other respects know so little about their own history that they will swallow any “fact” from the Jewish past that comes flitting across their screens.

What’s wrong, exactly, with “Jewish Surnames Explained”? In a sentence: despite its quotient of accurate information, its errors are legion. Yes, I know, everyone makes mistakes. Just yesterday, for instance, I unintentionally put a cat in my microwave. He’s dead now, and I won’t do that to him again. But the mistakes here aren’t of that one-off variety. They’re of the underlying-premise variety, and they are sufficient to place the whole enterprise under suspicion.

The first underlying premise is that one need not actually know Yiddish, Hebrew, German, or Slavic languages, or consult with anyone who does, in order to translate words from those languages and present the resulting fun-filled facts to a new audience. This leads to a symphony of errors, so many that it’s hard to know where to begin or to end. But here are a few.

Consider the name Kagan, which according to the article is derived from the Khazars, a Central Asian people who, according to legend, converted en masse to Judaism in the Middle Ages. Any mention of Khazars and Jews in the same sentence ought to raise a red flag, if only because the mythic Khazar “history” has become a favorite trope of anti-Semites, who use it to negate the Middle Eastern origins of the Jews—archaeology and genetic studies be damned. But to notice the mistake here, you need only know that h’s in other languages can become g’s in Russian. The name Kagan and its variants derive from the Hebrew word kohen, denoting descendants of the biblical high priests.

“Lieb means lion in Yiddish,” we are told. Actually, leyb means lion in Yiddish (with the vowel sound ey as in “hey”), while lib (the word that sounds like the German word lieb) is a verb form for “love”—as it is in German; this error requires an ignorance of two languages. We are told that Berliner means “husband of Berl,” despite the fact that Berl is a man’s name in Yiddish and Berliner is more recognizably derived from Berlin. We are told that Lieberman means “loverman”; it is actually a term of formal address, as in “dear sir.” We learn that Mendel is derived from Emanuel, when a rudimentary knowledge of Yiddish makes it clear that it is a diminutive of Menahem. There are more like this, but I needn’t bore you.

Take the Memoirs of Gluckel of Hameln, an autobiography by a 17th-century German Jewish businesswoman and a classic of early modern Yiddish literature, written well before the advent of official surnames among Ashkenazi Jews. In this memoir, Gluckel frequently identifies the people with whom she interacts by means of place names. Glikl Hamel, as she is known in Yiddish, married a man from Hameln (“Hamel” to Yiddish speakers). In her memoirs, she refers to her husband and her in-laws by that place name (which isn’t a surname) even though she and her husband spent most of their married life in Hamburg where she was born. In fact, they stayed in Hameln, which she describes as “a dull shabby hole,” only for the first year of their very young marriage—which for her husband meant only until he was fifteen. Yet the book isn’t called Memoirs of Gluckel of Hamburg. Similarly, Gluckel refers to a man with whom she has business ties as Judah Berlin since, yes, he lives in Berlin. But she does that because she lives in Hamburg. Did Judah’s neighbors in Berlin call him Judah Berlin? Unlikely.

Another big problem here is the utter lack of sources. Many of the article’s derivations amount to just one among several possibilities; the lack of substantiation makes it impossible to judge. Koenig, we are told, refers to a “Purim king, in reality a poor wretch.” I’d venture that Koenig is probably a place name based on Koenigsberg. Nor does the name Hirschhorn strike me as an animal name referring to deer antlers; it’s likely a simple reference to the German town of Hirschhorn—which does mean deer antler, but so what? When we say people are from Buffalo, are we saying they have meaningful associations with buffalos?

More: while I guess the name Kessler could, in theory, be a patronymic for the (rather unusual) name Kesl, it is more likely derived from kestler, a Yiddish word denoting a married man who lives with his in-laws. The name Zaks or Saks may or may not be a Hebrew acronym for zera k’doshim sh’mo (“his name descends from martyrs”); I’ve heard a similar story about its derivation from zikhron k’doshey shtendal (“memorial of the martyrs of Stendal”), referring to a medieval massacre in that German city. But the Hebrew doesn’t quite fit; in both cases, the final consonant would have to be a “sh,” and I’ve never met a Zaksh. It would make much more sense if the name were simply a reference to Saxony.

Not being a scholar of linguistics, or a historian, I could of course be wrong about all of this. But so could the author of this already suspect list of names. Without a single citation or a single explanation of where any of his information comes from, there is no way for me or anyone else to know.

“Jewish Surnames Explained” concludes, tellingly, with a perennial myth about American Jewish surnames: “Finally, there may have been Jewish names changed or shortened by immigration inspectors (though this is disputed).” This is like saying: “Finally, the lunar landing may have been faked to impress the Soviets (though this is disputed).” The idea that immigration officers at Ellis Island were a bunch of rent-a-cops scribbling down whatever names struck their fancy falls into the same category as Washington chopping down the cherry tree or the CIA killing Kennedy. Immigration officers at Ellis Island (and its precursor, Castle Garden) were accompanied by interpreters who were required to know at least three languages, while ancillary interpreters with knowledge of more obscure languages circulated to ensure competency—and in this context, Yiddish, German, Russian, and Polish were far from obscure.

None of this even matters, though, because immigration officers at Ellis Island never wrote down immigrants’ names. They obtained those names from ships’ manifests, compiled at the port of origin. Nor is it possible that the same mythic scenario was enacted on the European end. Ships’ manifests were recorded from passports and other travel papers, and the shipping companies were very careful not to make errors, because errors cost them money: inaccuracies were grounds for deporting improperly documented or unqualified people back to Europe at company expense.

True, European Jewish immigrants did have to render their names into Latin or Cyrillic letters to create passports, and yes, passports were sometimes forged—but those forgeries or name changes would have been generated by the immigrants themselves. It is also true that many immigrants chose new names for themselves in America, whether for expediency or to avoid discrimination. But that was after they left Ellis Island. I am not revealing state secrets here, or arcane information. Any school child who has been on a field trip to Ellis Island knows all this. But why use facts when rumors will do?

We all know that the Internet is full of unintended errors, not-entirely-unintended distortions, and outright malevolent lies. It has that in common with all human discourse. As Jewish content goes, moreover, “Jewish Surnames Explained” is benign compared with what you’ll find if you Google, say, “Jewish lobby.” (Hint: not the reception area of the King David Hotel.) Amid a sea of mendacity and hatred, complaining about this one article feels a bit like clubbing a baby seal.

And yet it is precisely that toxic sea that makes it all the more important to get Jewish history right. When so many, online and off, are hellbent on denigrating Jews, denying their history, and discrediting their traditions and their culture, mindless gullibility about these matters is in itself distressing. It shames me to think that American Jews, 49 percent of whom claimed in the recent Pew survey that an “essential part of being Jewish” was “being intellectually curious,” are so ignorant of their own heritage as to lay eager claim to the most questionable and transparently dubious fluff, and celebrate it as fact. This, to me, is almost as depressing as when someone tells you he’s sent his banking details to Nigeria.

In the end, and despite the number of true facts it contains, “Jewish Surnames Explained” explains little, and that badly. It is really nothing but a bobe-mayse—which, incidentally, does not mean “grandma story” but is rather a reference to the Bove Bukh, a wildly popular Yiddish romance of the early modern period whose hero, Bove, gets drawn into fantastic and utterly implausible adventures.

But don’t get me started.

Dara Horn is the author of four novels. The most recent, A Guide for the Perplexed, was published in September.