Suppose the president never intended to roll back Iran’s nuclear program. How then would he proceed? 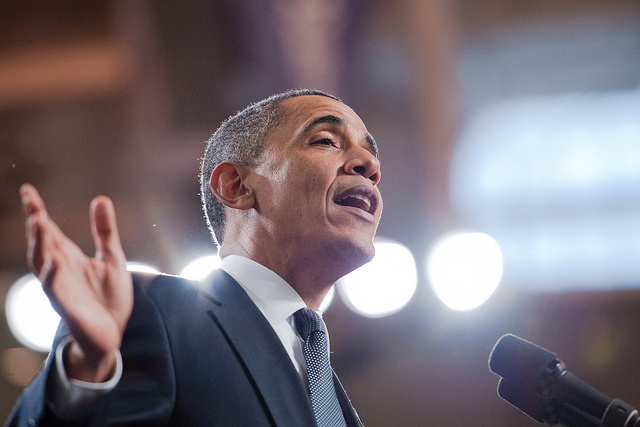 President Obama has repeatedly promised to do whatever it takes to prevent Iran from acquiring a nuclear bomb. If there is no other choice, he says, he will resort to force. In a March 2012 interview with Jeffrey Goldberg, the president famously rejected the alternative policy, namely, allowing Iran to go nuclear and then trying to contain it. He emphasized the point dramatically: “[A]s president of the United States,” he said, “I don’t bluff.”

Really? Suppose this statement was just a show of toughness, timed to keep supporters of Israel on his side during the 2012 campaign season. Suppose that, when it came to Iran, in his heart of hearts, the president actually preferred a strategy of containment to a strategy of prevention. Suppose that was actually his policy aim from the outset—but, for obvious reasons, he couldn’t say so. How would he proceed?

He would proceed exactly as he has been proceeding—trumpeting his intention to roll back the Iranian nuclear program while actually avoiding confrontation at all costs.

To gain a sense of the president’s methods, consider first the saga of Syria’s use of chemical weapons that developed in 2013. Each time the situation called for a tough response, Obama telegraphed a punch—his famous “red line”—but then never actually delivered the blow.

The White House first realized that Bashar al-Assad had employed chemical weapons in the spring of last year. Its immediate reaction, however, was anything but a rush to enforce the president’s announced red line. On the contrary, it stalled for time. When the political pressure to respond became unbearable, the White House announced, in June, an intention to increase aid to the Syrian opposition. The president, it now seemed clear, was going to force Assad to pay a price for his barbarity. But the announcement soon revealed itself as a ploy to buy still further time, the diplomatic equivalent of “the check is in the mail.” The aid never arrived.

Then came the August 21, 2013 chemical attack that killed around 1,500 Syrian civilians. This time, the administration reacted quickly. Within days it appeared absolutely determined to punish Assad. Any doubts about its resolve were dispelled on August 30, when Secretary of State John Kerry stood before the television cameras and delivered a Churchillian speech justifying immediate missile strikes against the regime. But then, instead of ordering military action, the president decided to seek congressional authorization for the use of force, knowing full well that such a bill had little chance of passing. In short, he punted.

Call it the case of the vanishing reprisal. It is a pattern that reflects the president’s deep aversion toward U.S. involvement in open-ended conflict in the Middle East. His legacy, he has made abundantly clear, is to end such involvement. And just as that dictated doing nothing to stop Assad, it has dictated a posture of complacency toward Iran.

Indeed, the failure—or, better, the refusal—to stand up to Assad in Syria was also a failure to contain the Iranian Revolutionary Guards and their proxy, Hizballah. After all, these two actors did the most to turn the tide of the Syrian civil war. It was their direct intervention that broke the momentum of the insurgency and rescued the Assad regime from destruction.

Here, too, the same pattern is at work. Few have noticed the degree to which, in dealing with Iran’s aggressive behavior in the Middle East, Obama has broken ranks with his predecessors in the White House. For the last 35 years, every other American president has defined countering Iran’s malign influence as a vital American interest. To be sure, Obama still pays lip service to this traditional policy. “We are clear-eyed about Iran’s support for terrorist organizations like Hizballah, which threaten our allies,” he assured us again in this year’s State of the Union address. But the gap between word and deed has been glaring.

Recently, Obama went so far as to envision Iran as a constructive force in regional security. “[I]f we were able to get Iran to operate in a responsible fashion,” he told David Remnick, the editor of the New Yorker, “you could see an equilibrium developing between . . . [Sunni] Gulf states and [Shiite] Iran in which there’s competition, perhaps suspicion, but not an active or proxy warfare.”

In poker terms, this would be known as a “tell,” a behavioral tic that inadvertently reveals a player’s bluff. In the case of Iran, as in the case of Syria, the president is looking for an exit.

Nowhere is this more evident than in the nuclear negotiations with Tehran that resulted in the interim deal reached in Geneva in November. Even strong supporters of the president’s policy are now publicly expressing doubts about that deal. Thus, Fareed Zakaria, the former managing editor of Foreign Affairs and former editor of Newsweek International, came away flabbergasted from an interview that he conducted for CNN with Iranian President Hassan Rouhani at the recent World Economic Forum in Davos. So impressed was Zakaria by the yawning gulf between the American and the Iranian positions that he called the interim deal “a train wreck.”

Even more startling is the skepticism of Dennis Ross, who, until late 2011, was a senior official in the Obama White House with responsibility for the greater Middle East. A study group recently chaired by Ross assessed the interim deal as so “deeply flawed” as to “undermine the effort to prevent a nuclear Iran.”

Obama himself has let it be known that he is not optimistic about the prospects of the next round of negotiations. In his interview with Remnick, he put the chance of success “at less than even.” These are low odds. But does that mean that the president has already worked up a tough Plan B? Is he preparing a response that will leave the Iranians in no doubt that they will be worse off if they fail to satisfy the minimum requirements of the United States and its partners? Or will we witness yet another instance of the vanishing reprisal?

The questions have already answered themselves. The outline of the real Plan B is fully visible in the Joint Plan of Action (JPOA) that emerged from Geneva. Technically, that deal lasts six months, but it can be extended indefinitely by mutual consent. While the parties to the agreement express the “aim” of reaching a comprehensive agreement within a year, they are also careful not to commit themselves in any way. The deal, in other words, is less interim than interminable.

Obama’s surrogates are already telling us to expect a very long negotiation. “I think it’s extremely unlikely that it will be possible to reach a comprehensive agreement in the next six months,” says Gary Samore. He ought to know; until last year, he served as the top arms control official in the White House. Samore thus spoke with authority when he concluded: “We’re in for a rolling series of extensions.” In short: endless process, no endpoint.

And consider where we’re already at in this process. Despite claims to the contrary, the JPOA does not “dismantle” any part of the Iranian nuclear program. It pauses some aspects, while others proceed apace. A “research” loophole allows the Iranians to continue work on advanced centrifuges. In short, Iran gets to have it both ways: to enjoy sanctions relief (the West’s part of the deal) while continuing to build up its nuclear program (Iran’s part of the deal).

Much energy on the part of the White House has been invested in painting a contrary picture. We are assured that real progress has been made; we are even told that Iran has embarked on a historic reconciliation with the West. The president, even as he admits to doubts about the prospects of success, deftly encourages exaggerated hopes for the ongoing negotiations in order to seize the moral high ground from skeptics. The White House has even taken to branding its critics as warmongers seeking to sabotage the chances for peace. “If certain members of Congress want the United States to take military action, they should be upfront with the American public and say so,” warned Bernadette Meehan, a White House staffer.

Thus the interim deal allows the president, too, to have it both ways. He makes concrete concessions to Iran in the present while promising get-tough policies in the future—at, that is, some very distant point in the future, which, as it draws nearer, will assuredly vanish in turn like a mirage in the desert.

Continuing to profess an unshakable resolve to roll back the Iranian nuclear program, the president has blunted every argument for a tougher policy and found plausible-sounding excuses to resist all calls for increased pressure on Tehran. While denying it vehemently, he has put the United States on a glide path to accepting a nuclear Iran—bluffing all the way.