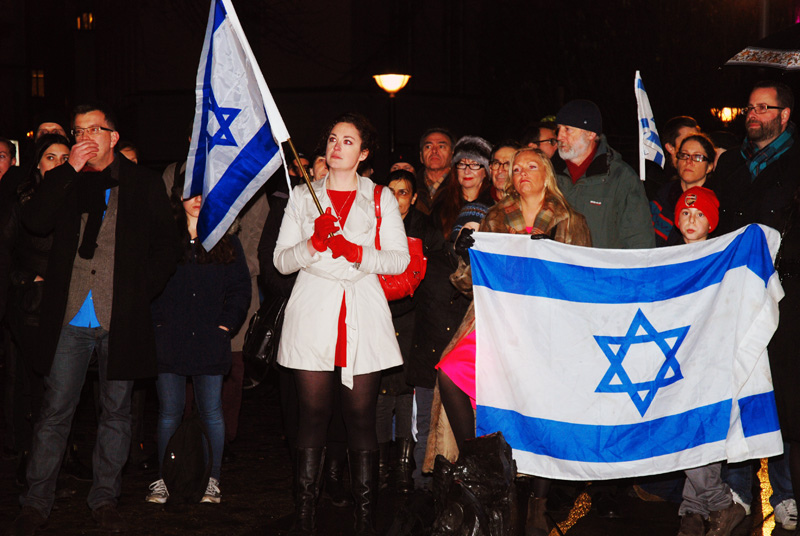 “The Jews in this country are suffering from peace damage, you know.”

I was having lunch in Stockholm with my eighty-five-year-old friend Kuba. This was in November of last year, soon after the story broke that I had applied for asylum in my own country on grounds of religious persecution. My argument, as I explained in Mosaic, was that when it came to the basic human right of Swedish Jews to conduct their religious lives freely and safely, our government was in breach of its obligations under the Universal Declaration of Human Rights and the Swedish constitution.

Of course, I was perfectly aware that filing for refugee status in one’s own country might seem like only a stunt, and that my application would be promptly dismissed, as indeed it was. But I had been watching for years as the incidence of Swedish anti-Semitism rose steadily, as violent hate crimes against Jews increased, as moves were initiated in parliament and elsewhere to curtail or ban core Jewish ritual practices like circumcision and kosher slaughter (shehita)—and as nothing was done to counter or reverse these trends, either by the government, by politicians and human-rights activists, or by the Jewish community.

The final item in that list—the passivity of the Jewish community—was what triggered my friend Kuba’s remark about peace damage. “Swedish Jewry,” he elaborated, “is addicted to living in peace, we have nursed it for so long and been so thankful for it that we can no longer recognize when the time has come to fight.” Exactly so. And this, in a nutshell, is why I jumped through all the legal hoops of applying for asylum just for the sake of having my petition immediately turned down. The dire situation of Swedish Jewry was hardly new, but it merited a new form of action.

And to that extent, I did succeed. The story of my application made news around the world even before it did in Sweden. Over the course of a few days I was blessed to receive over 500 emails, there were thousands of “shares” in social media, and by the end of the week I had spoken about religious freedom as a basic human right to media outlets in Russia, Poland, Israel, Germany, Great Britain, the U.S.—and finally even in Sweden.

True, the power of social media in an ever-shrinking world is not all to the good. My name could already be found on various anti-Semitic websites in Sweden, and now overnight it became a global magnet. On one jihadist site I found not only my name and picture but also my address, together with a colorful description of what needed to be done to me and to those I love. I am sure there was and is much more where that came from, but after two days I stopped checking and stopped reading as the exercise was getting under my skin and into my dreams.

One of the most touching reactions came in a letter from a fourteen-year-old Swedish boy who wrote to tell me that I had opened his eyes. As a child, he had been beaten up more than once for wearing ritual fringes (tzizit), and had assumed he had only himself to blame for being so careless as to leave them visible. As a result, he had slowly tried to alter his appearance, assuming that this was the only thing to do and also part of his responsibility as a Jew. The article in Mosaic changed his mind; along with other Jewish youngsters his age, he was now organizing a letter-writing campaign to protest the government’s violation of their human rights.

I would be overjoyed to report that my actions resulted in major political change or that I helped turn the tide. Needless to say, that did not happen. A few legal experts contacted me, kindly offering their services if I wanted to pursue matters. A few politicians also got in touch to profess their sympathy. I met with one of them, a member of the liberal party. Along with the obligatory coffee, he served up plenty of beautiful words, but no proposals and no solutions.

As for the organized Jewish community, the reaction from those quarters was a mix of dismissal and dismay. I was labeled a fear-monger. I was warned that I was putting my fellow Jews in harm’s way by crying wolf and making us look like a community of trouble-makers. Can’t you see we’re doing fine, one woman asked me impatiently? Look, when President Obama was here a few months ago, he went out of his way to visit our synagogue. He takes an interest in us; what is that if not assurance for the future?

Her words did not make sense to me then, and they still don’t. I fail to understand how Swedish Jewry is any less vulnerable because one world leader has stopped by our synagogue to memorialize Raul Wallenberg, the courageous Swedish diplomat who helped save Jews during the Holocaust. There has never been a lack of memorials in our history, or any shortage of dignitaries willing to commiserate with our losses.

But what about the day after? When the motorcade leaves and the president is off to shake someone else’s hand? Who is for us then? Does Barack Obama’s visit insure that we’ll be able to eat kosher food, pray in peace, or walk the streets without fearing verbal abuse or physical harm? Sometimes it seems to me that Swedish Jews, and maybe European Jews in general, are so dependent on non-Jews to fight for our rights that, when they fail to oblige, we assume those rights were never worth fighting for in the first place.

In 2002, the Swedish government proclaimed it was cracking down on anti-Semitism and the surge in hate crimes against the Jewish minority. It did so by allotting the national Jewish council $500,000 for added security needs. This was my country’s answer to our plight: bullet-proof windows for our children’s schools and higher walls for us to hide behind. We ask to live freely, and they build us a ghetto. It is not only inadequate, it is an insult. When I expressed my disappointment in this “effort,” I was called ungrateful, even by my fellow Jews. And that makes me think that Kuba was right. Busy being thankful for freedom, we fail to see that what we are helping achieve is freedom from us, not freedom for us.

So what now? In the comments section on Mosaic, many readers asked me a simple question: Why insist on living in a country that is not yours, and that obviously does not want you? Why not just pack up and move to Israel?

I get the point. I’m certainly not against aliya to Israel, and I may even resort to it myself. But many in my community will not, and, whatever they think of me, I feel a responsibility toward them. In my small synagogue alone, there are eight men and women over the age of seventy who walk to services on the Sabbath, who keep kosher homes, who live traditional Jewish lives. They deserve to be able to walk safely, buy their meat, attend a grandson’s bris. Am I to regard them as so much unavoidable collateral damage, and just abandon them? They did for me. Now I must do for them.

Besides, Sweden is my country, and for me the issue is uncomplicated: the government promised to protect us, and it doesn’t; therefore, we have to stick up for ourselves. Many don’t know that the Sami people, Sweden’s indigenous population, are allowed to perform shehita on their reindeer; it’s just not called shehita. The Sami are protected under Sweden’s minorities law, and they enjoy widespread support for their right to preserve their practices and their culture. Even fewer know that the Jewish population is also included under the same law, having been added to the list in 1999.

My next step, then, will be to challenge the 1937 ban on kosher slaughter through legal and political action, taking my petition to the Council of Europe.

I know that many think that this is a war that cannot be won, and maybe that’s true. But it’s not over yet. Kuba said that we Jews do not recognize the time to fight. I’m here to say that this is it. If the experts and scholars are correct, and if not just Sweden but Europe is over for the Jews, I at least want to help make the world aware of the long train of broken promises that have brought us to this point, and to make sure that we Jews—European born, bred, and betrayed—go down fighting.

Annika Hernroth-Rothstein is a Swedish writer and political adviser and an activist in support of Israel.