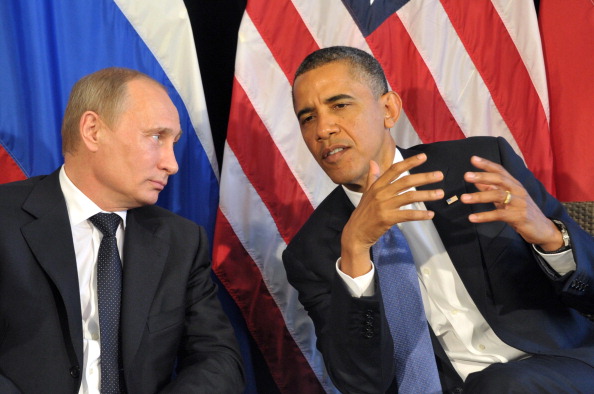 Vladimir Putin and Barack Obama discuss the situation in Syria at the 2012 G20 Summit in Mexico. Photo credit: ALEXEI NIKOLSKY/AFP/GettyImages

The day before Russian President Vladimir Putin flexed his muscles in Ukraine, the columnist Jeffrey Goldberg asked President Obama whether, given his failure to police his own “red line” in Syria, countries like Russia and Iran still believed he was capable of using force to advance American interests. Repudiating the inference, the president pointed to his threat last fall to intervene militarily with targeted strikes in Syria. That threat, he averred, was directly linked with the support subsequently given by both Russia and Iran to the agreement stripping the Assad regime of its chemical weapons:

We’ve now seen 15 to 20 percent of those chemical weapons on their way out of Syria with a very concrete schedule to get rid of the rest. That would not have happened had the Iranians said, “Obama’s bluffing, he’s not actually really willing to take a strike. . . .” Of course they took it seriously!

In three ways, this rendition of events is illusory. First, the Syrians are not, in fact, sticking to the chemical-weapons agreement. Assad has repeatedly dragged his feet, delaying the process of removing the weapons in order to keep Washington and the Europeans dickering with him; in the meantime, Syrian security forces continue to enjoy a free hand slaughtering people by means of conventional arms. Second, and more important, Obama’s stated goal in Syria was to establish a process that would force Assad to step aside and make way for a transitional government capable of ending the civil war. Touting his “success” with Assad’s chemical weapons is a sleight of hand, deflecting attention from the abject failure of that larger aim.

Which brings us, third, to that larger aim, an aim vehemently opposed by both the Russians and the Iranians and whose relinquishment was decisively—and handily—abetted by them. In fact, both Putin and Ali Khamenei, Iran’s Supreme Leader, understood something very well back in the fall: Obama’s threat of force was half-hearted at best, and he was looking for a path of retreat. In coming to his rescue, Putin in particular expected a quid pro quo. In return for Russia’s agreeing to help with the chemical-weapons deal, the U.S. would back off from any pursuit of regime change.

Putin was not disappointed, and neither were the Iranians. Time and again, Obama has since made it clear that he does not intend to help the Syrian opposition topple Assad. Meanwhile, the Russians and the Iranians have redoubled their efforts in the opposite direction: training and equipping Syrian government forces and, on Iran’s part, sending detachments of the Qods Force and Iranian-trained foreign militias like Hizballah.

Contrary to what he boasted to Jeffrey Goldberg, then, Obama’s true message to Assad, Putin, and Khamenei was not, “Negotiate with me or face military action” but “Hand me a fig leaf and I will retreat.”

To judge by events now unfolding on both the Russian and the Iranian fronts, that message has been heard loud and clear. In the former case, it is undoubtedly true that many factors of a purely domestic nature have gone into determining Putin’s well-documented belligerence toward Ukraine and other countries bordering Russia. Still, the Russian leader’s decision to act forcibly must have been eased by Obama’s flaccid performance in the Middle East. As Scott Wilson of the Washington Post noted about the president’s warning to Putin to keep his hands off Crimea, “[r]arely has a threat from a U.S. president been dismissed as quickly — and comprehensively.”

But the real consequences of the Syria debacle can be seen with respect to Iran.

If the Iranians understand one thing, the president assured Jeffrey Goldberg, it’s that, if cornered, he will resort to military force to stop them from acquiring a nuclear weapon. But, just as in Syria, Obama’s primary goal in Iran is to avoid ever being cornered. Gary Samore, a former Obama White House official, has expressed it with admirable clarity: “Our strategy is to buy time.”

Unfortunately, time does not come cheap. Although the president insists that a policy of delaying the arrival of an Iranian nuclear bomb is perfectly consistent with a policy of preventing its arrival altogether, in fact the two aims are largely incompatible. Delay comes at the cost of prevention.

Stopping Iran’s march toward nuclear capability would require instilling in Ali Khamenei the certain knowledge that if he fails to drop his program, he will suffer economic ruin, or a devastating military attack, or both. To be successful, therefore, the interim diplomacy must be carried out under a hard deadline. The Iranians must be left in no doubt whatsoever that failure to reach a deal by a date certain will leave them in a much worse position than before the negotiations ever started.

Obama’s diplomacy fails this elementary test. Rather than forcing Khamenei to make a hard choice, the “interim deal” struck in Geneva last November explicitly offers him an escape route: endless negotiations. According to the terms of that deal, diplomacy can be extended indefinitely. Although defenders of the administration downplay the significance of this fact, claiming that the Iranian program is “frozen” during the period of negotiations, that claim is false. The program advances even as the diplomats haggle.

For one thing, the interim deal is silent on ballistic missiles and warheads, two key components of any nuclear program. For another thing, although the deal does extract concessions on centrifuges and enrichment, even in these areas the Iranians are still moving forward. In recent congressional testimony, David Albright, a leading expert on counter-proliferation, pointed to a major loophole in the agreement that allows continued “research and development” on second-generation centrifuges. Since, he explains, these so-called IR-2Ms are more efficient than the first-generation machines currently in operation, “At the end of the interim period Iran is likely to be far better positioned to deploy reliable IR-2m centrifuges on a mass scale at its enrichment plants. This gain would allow Iran to make up for time lost more quickly.”

Over the next months, we can expect Khamenei’s negotiators to test Obama’s red lines. What then? If the president finds himself compelled to assume a firm posture, as he did with Syria last fall, the Iranians might present him with a fig leaf in the form of a revamped interim deal. For example, they might agree to dismantle first-generation centrifuges in return for the right to replace them with IR-2Ms, thereby increasing the program’s overall capacity to enrich uranium with a decreased number of centrifuges.

Would Obama reject such a deal and launch a military strike, or would he embrace it in order to buy more time? Odds are, he’d embrace it. Congress would certainly balk, but the big showdown between Capitol Hill and the White House would not come, if ever, until after this year’s mid-term elections, by which time the president will be less constrained by domestic critics. In addition, he could deal with those critics as his staffers did when November’s interim deal was first announced, painting dissenters in Congress as warmongers and subtly suggesting that they are dancing to the tune of a foreign power (i.e., Israel). At the same time, the president could turn to the American people and proclaim, “Just as I forced Assad to give up chemical weapons, I have now compelled Iran to destroy nuclear infrastructure.”

In brief, it is undoubtedly the case that Obama’s policies have weakened the deterrent credibility of the United States everywhere. While many are now decrying the results of that weakness in the case of Ukraine, its effects are even more directly visible, and more alarming, in the case of Iran. Maybe, just maybe, the president will keep his promise to prevent Iran from going nuclear on his watch. But the emphasis is entirely on the last phrase—on his watch. That’s very different from a policy aimed at preventing Iran from going nuclear, period. Meanwhile, interim deal or no interim deal, Tehran, as aware of American election cycles as is Barack Obama himself, steadily moves toward a point within a hair’s breadth of an undetectable breakout capability.