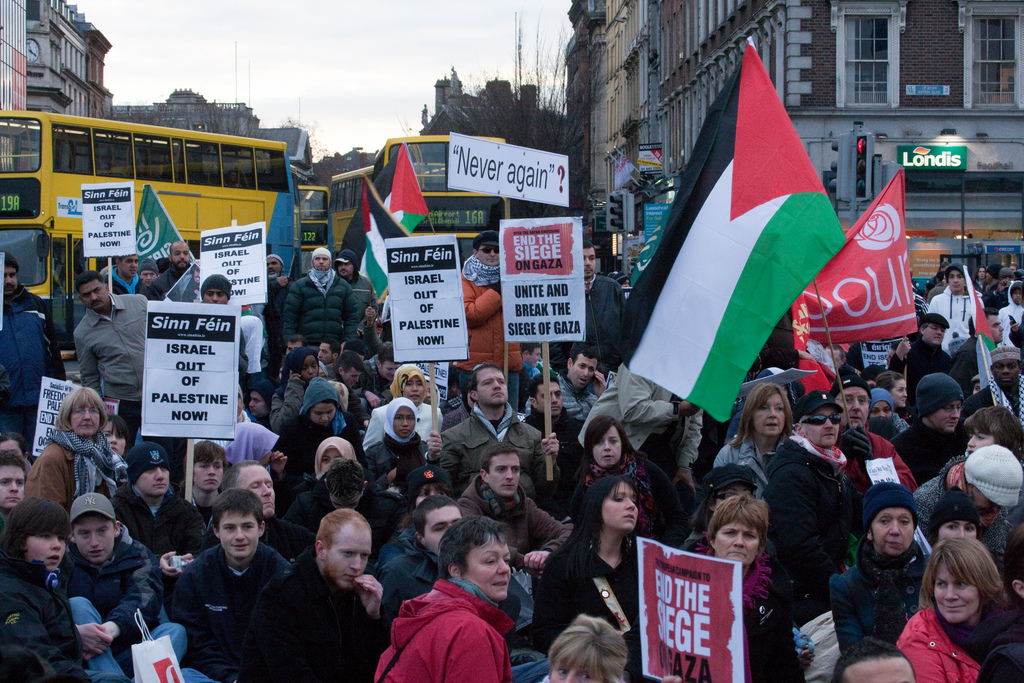 Anti-Israel protestors in Ireland in January 2009. Photo by William Murphy via Flickr.

The Middle East is exploding in mayhem and savagery. The region’s system of nation states is disappearing before our eyes, perhaps to be replaced by one or more jihadist movements pledged to the destruction of Western civilization. In the upheavals to come, only one civilizational force, one stable democracy, has the will and the means to fight back and to defend the values of the liberal West. It is the tiny nation state of Israel.

Since this is indisputable, you might think that out of sheer self-interest, if for no other reason, the Western democracies would extend some degree of solidarity to embattled Israel. At the very least, they might defend it against the unrelenting campaign by Arab and third-world powers to vilify and prosecute it at the United Nations and in other international forums. But this the democracies have seemed largely disinclined to do. As a result, not only are we witnessing the near-collapse of Western resolve against the threat of jihadi Islam, but the democratically elected leaders of Israel are the ones being routinely pilloried in enlightened opinion as warmongers, racists, and colonial oppressors.

A key moment in this development occurred at a private dinner party in 2001, when Daniel Bernard, France’s ambassador to England, was overheard remarking that “All the current troubles in the world are because of that shitty little country Israel. Why should the world be in danger of World War III because of those people?” That ugly episode is, in turn, the starting point of a slim ebook by Joshua Muravchik, a fellow at the Johns Hopkins University School of Advanced International Studies, published last January under the title Liberal Oasis: The Truth about Israel. An important contribution in its own right, Liberal Oasis is also an indispensable companion piece to Muravchik’s newly released Making David Into Goliath: How the World Turned Against Israel. Together, the two add up to a powerful indictment of the West’s serial moral failures regarding Israel and the Middle East conflict.

In Liberal Oasis, Muravchik presents a long list of Israel’s extraordinary accomplishments during its 66 years of existence. He begins with a few telling comparisons with the nation whose envoy judged Israel to be a “shitty little country.” As Muravchik reminds us, “big” and “glorious” France had to be bailed out by the United States in World War I, surrendered abjectly to the Nazis in World War II, and then lost brutal colonial wars in Vietnam and Algeria. “Shitty” or not, little Israel, standing alone, defeated numerically superior Arab armies bent on its destruction in 1948, 1967, and 1973.

But that’s far from all. Despite a huge defense burden and the expense of absorbing millions of destitute immigrants from the Middle East, Ethiopia, and the former Soviet Union, Israel is poised to catch up with France in per-capita income, and it has actually pulled ahead in standards of living. “According to the 2012 report of the UN Human Development Program,” Muravchik notes, “France ranks 20th among the world’s nations, behind Israel at 16th.” Though it still thinks of itself as the center of European enlightenment, and though its population is nine times bigger, France trails Israel in Nobel Prize winners, numbers of books published, and numbers of published scientific papers.

“Tweaking the French,” Muravchik writes in Liberal Oasis, “is a joy that is hard to resist.” But his comparisons are really about something much more fundamental. He presents convincing proof that Israel has succeeded in its historic mission to a degree that even its supporters might never have expected. The point is summarized in this eloquent passage:

Although it is “little” and young and has had to fight to survive every moment since its gestation, Israel has become one of the world’s greatest countries. I use the word “great” not to suggest its military might, although Israel’s is formidable, nor its economic accomplishments, which are also outstanding. . . . Israel’s greatness lies in its accomplishments in all fields of humane values, the very same values, ironically, that Israel’s liberal and leftist detractors claim to hold dear.

This is no idle boast, nor is it pro-Israel puffery. In separate chapters mockingly titled “Liberté,” “Egalité,” and “Fraternité,” Muravchik demonstrates that even by the international Left’s standards of political, economic, and social justice, beleaguered Israel ranks higher than many of the world’s oldest democracies. Although it remains perforce on a permanent war footing—the number of Israelis who have perished in the country’s wars and terrorist attacks is equivalent to over 10 million American lives—the vibrancy of its political debates, its free media open to all political viewpoints, including stridently anti-Zionist critiques of the government, are something to marvel at. Under similar circumstances, writes Muravchik, “it is doubtful that even the most free and liberal states would preserve more freedom and liberality than Israel has done.”

And yet, despite this extraordinary record, large sectors of opinion in the West have turned against Israel. In Making David into Goliath, his new full-length book, Muravchik tells the story of how this happened.

His account begins with Leon Uris’ 1959 novel Exodus. That reverential, fictional treatment of Israel’s rebirth after the Holocaust and its heroic struggle for survival in the 1948 War of Independence became not only a smash international best seller but the highest-selling novel in American history since Margaret Mitchell’s Gone with the Wind.

But in the world’s brief love affair with Israel, the mass popularity of Exodus and the Israeli army’s subsequent lightning victory in the June 1967 war were the high-water mark. Right after that war, the tide began to turn; ever since then, anti-Israel (and sometimes anti-Jewish) animus has continued to build almost in inverse proportion to the country’s growing list of economic and social achievements.

Israel’s unforgivable sin, in Muravchik’s telling, lay in winning the 1967 war and then occupying some of the aggressors’ territory. Succeeding Israeli governments waited for the Arabs to negotiate for peace and discuss terms of future relations—which is exactly how the European wars of the 20th century ended. But the Arabs’ adamant refusal even to recognize the Jewish state left it, by default, in the role of “occupier.” That marked Israel as the guilty party. In short order, it went from being admired by much of the liberal world as a plucky little David to being regarded as an increasingly ugly Goliath.

Muravchik chronicles the turnabout in several chapters on the main political developments in the post-1967 decades, including the Arab nations’ effective use of the oil weapon and their success in turning the UN into a forum for condemning and delegitimizing the Jewish state. Along the way, he traces how Israel’s necessary occupation of the Palestinian territories after 1967 led to a resurgent Palestinian nationalism and the widely held perception in the West that Israel was preventing the formation of an independent Palestinian state.

Never mind that this latter allegation was proved false when two separate Israeli prime ministers—Ehud Barak (1999-2000) and Ehud Olmert (2006-2009)—offered the Palestinians a state, only to have the offer rejected first by Yasir Arafat and then by Mahmoud Abbas. The myth that Israel was holding back Palestinian statehood, entertained by opportunistic Western governments and liberal leftists in the thrall of “post-colonial” fantasies, was too entrenched to be dislodged by mere facts.

Muravchik’s two most devastating chapters describe the malignant role played in the burgeoning hate campaign by Bruno Kreisky, the former chancellor of Austria, and the late Columbia University professor Edward Said. In the 1970s, Kreisky emerged as one of the most influential leaders of the Socialist International, the bloc of moderate European social-democratic parties that had once been warmly supportive of Israel (which was then also governed by a socialist party). Like many of his fellow Marxists, Kreisky, an archetype of the self-hating, European Jewish leftist, held that the Jews did not constitute a people deserving of national rights. As a statesman, he made it his mission to steer his fellow European socialists away from Israel. In this endeavor, as Muravchik ruefully recounts, he was largely successful.

The chapter on Edward Said is a tour de force. Carefully summarizing the thoroughgoing critiques of Said’s oeuvre by reputable specialists in the Middle East and Islam, Muravchik details the many ways in which the celebrated author of Orientalism and The Question of Palestine abused scholarly standards, distorted his opponents’ work, and even dissembled the story of his own life as a so-called victim of the Zionist conquest of Palestine.

None of this, however, has mattered in the least on American and European university campuses, where Said remains the most widely read author in courses in the humanities and Middle East studies, and where his narrative of Western imperial subjugation of the Arabs and the Zionist colonization of Palestine remains dominant. “In considerable part thanks to the impact of Edward Said,” Muravchik concludes, “[Zionism] became redefined against its will as a movement of white people competing for land with people of color.”

Joshua Muravchik’s exposé of the international hate campaign against Israel is at once the story of a decent country trying to survive in a murderous, broken neighborhood and a story of mendacity and political cowardice in Western places high and low. If there is one saving grace to that story, it comes from the example of the people of Israel themselves, with their amazing resiliency and creativity. Among the many startling facts that you can find in Muravchik’s two volumes are these: with the exception of the U.S., Israel is the only Western nation with a birth rate above replacement level; and in survey after international survey, Israelis rank among the happiest people in the world.

Israel and its people have settled in for the long haul. The least that others can do is to demonstrate vocal and persistent solidarity with so towering a sentinel of light and freedom.

Sol Stern is a contributing editor of City Journal.