What you think you know about Jewish life in Eastern Europe is wrong, argues a fascinating (but problematic) new book. 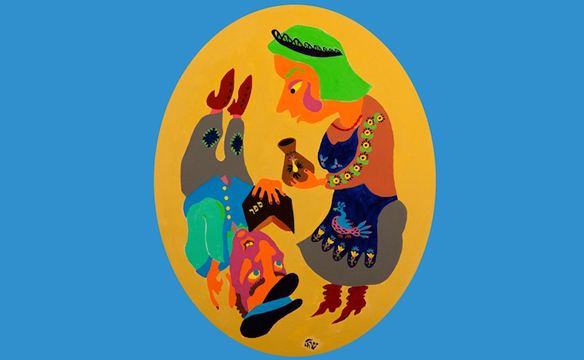 “Deconstructing Fiddler on the Roof” is a favorite gambit of professors introducing students to the history of East European Jewry: begin with what they think they know about life in the shtetl, and then start busting the myths. Were matchmakers women? (No.) Did Russian police instigate pogroms? (Rarely, if ever.) Is there a single documented case of shtetl residents singing “Sunrise, Sunset” at a wedding? (Come on.)

Yohanan Petrovsky-Shtern, a historian at Northwestern University, has given us a vigorous, well-documented, and entertaining new version of this trick in his recent The Golden Age Shtetl: A New History of Jewish Life in East Europe. In fact, he uses Fiddler on the Roof as a foil, beginning and ending with references to the musical while devoting the bulk of the book to everyday shtetl life in the half-century from 1790 to 1840.

The word shtetl refers to the small market towns where, for several centuries, a large portion of East European Jews lived. (The shtetl was a “Jewish town” only in the sense that Jews usually made up about half the population; it was not in any sense a ghetto.) The story of the shtetl begins in the second half of the 17th century, when Jews in Poland-Lithuania began to forsake the countryside for population centers that were assuming growing importance as hubs of commerce and manufacture, linking agricultural villages to major trade routes. Encouraged by the Polish nobility, Jews played a crucial role in these activities throughout the 18th century. When, between 1772 and 1795, Russia, Prussia, and Austria systematically dismembered their hapless neighbor, Poland-Lithuania, the majority of shtetls came under Russian rule. It is these that form the focus of Petrovsky-Shtern’s book.

The Golden Age Shtetl does not so much tell the story of the shtetl in Petrovsky-Shtern’s chosen half-century as paint a picture of how it worked, making fine use of the technique of “thick description” (social-science lingo for lots of detail). The book is organized thematically, with each chapter taking on a specific aspect of shtetl life: tavern-keeping, family, violence, book-publishing, etc. Paying relatively little attention to the intellectual ferment of the era, the author instead tells us a very great deal about relations between Jews and Russian officials, commerce, the layout of a typical shtetl house, and the like—information extracted primarily from official reports found in the governmental archives of Russia and Ukraine.

Surprisingly, given the recent explosion of research on East European Jewry, very few books have been written about the time period 1790-1840, and most of them appeared before the fall of the Iron Curtain. The Golden Age Shtetl should therefore fascinate the curious lay reader and scholarly specialist alike. Its strength is that it neither romanticizes nor vilifies the shtetl, and conforms to no ideological agenda; instead, shtetl Jews emerge from its numerous anecdotes as simply and deeply human.

And Petrovsky-Shtern does pile his anecdotes on. Luckily, the stories are so lively, and his style so engaging, that they never seem tiresome. Take, for instance, the case of a Jew named Gershko Plotnitsky, ordered to appear before Nikolenkov, a Russian magistrate.

[The magistrate] ordered his assistant, also a Christian, to hold Gershko down while Nikolenkov beat him. Furious, Gershko could not control himself. He pushed the assistant away and rushed out of Nikolenkov’s office. On his way out, he dealt a hard blow to one Esinsky, a Christian clerk, punched another Russian clerk in the chest, and ran away, yelling “abominable obscenities” in Russian. No one could detain, restrain, or appease him.

The reader does not learn poor Gershko’s crime or eventual fate, only that, unlike the shtetl Jews of popular imagination, he was neither weak nor meek. And Petrovsky-Shtern makes a credible case that, while this might be an extreme example of anti-bureaucratic violence, it was by no means an atypical one.

Amid his stream of anecdotes, Petrovsky-Shtern also advances two distinct arguments. The first is aimed at the myth of the shtetl (traced by him to late-19th- and early-20th-century literary figures and polemicists) as worn down, impoverished, remote, locked in a struggle between rabbinic obscurantism and revolutionary ideologies, and filled with unmanly men too timid to stand up to persecution. The misunderstanding, he suggests, stems from concentrating on the shtetl during its long period of decline; his own focus on its “golden age” is meant to rectify that mistake.

The second argument, seemingly aimed at specialists, is less explicit. The first decades of Russian rule, Petrovsky-Shtern writes, brought about a marked improvement over the prior decades of Polish rule, and helped usher in a brief era of “Judeo-Slavic brotherhood”—the “golden age” of his title. He builds his case by trying to show the specifically Russian influence on Jewish life, including the economic benefits it introduced.

What are we to make of these two arguments? The first—against those who believe the shtetl never had a golden age, or that its golden age consisted solely in finding spiritual solace amid poverty and persecution—is convincing enough, though it should be noted that scholars have long since moved past such naive images. His second argument is true in part: the economic decline of the shtetl did not begin until the 1860s, two decades after his end-date of 1840. But he fails to justify the starting point of 1790 for his “golden age”—and, in creating his own myth about a Russian-Jewish symbiosis, posits a golden age where none existed.

Nowhere does Petrovsky-Shtern demonstrate what made the 1790s more “golden” than the 1780s. Although he attends amply, and appropriately, to smuggling, which Jews did quite a lot of in the first decades of Russian rule, he admits that smugglers were simply conducting trade along the same routes they had been using legally for more than a century. Nor is it credible that the shtetl was better off because Jewish merchants had to resort to bribes and ruses to conduct business. Although it’s intriguing to read how deftly Jews were able to outmaneuver the Russian bureaucracy, they had been just as deft at handling Polish authorities in the past. When it comes to family and religious life, there is even less reason to believe much changed with the end of the 18th century. True, there was no mass violence against Jews during this period, but recent research suggests that, despite sporadic violence, Jews also flourished culturally and economically in 18th-century Poland.

In propping up his argument that Russian annexation ushered in a new efflorescence, Petrovsky-Shtern also exaggerates the benefits of Russian rule. Yes, Russia had some enlightened officials and policies, and anti-Semitism, as he rightly claims, was by no means the norm for Russian bureaucrats at the time. But even in these supposedly golden years, the results of Russian rule were decidedly mixed, and besides, much of what he ascribes to the relative benignity of the Russians held true in shtetls that had fallen into Austrian hands as well.

Finally, there is Petrovsky-Shtern’s appeal to positive attitudes among Jews toward the tsarist regime. Many Jewish leaders did indeed declare their loyalty to the tsar during the Napoleonic invasion, but this hardly proves that “Jews admired the Russian empire” or believed it had “liberated them from Polish bondage.” Some of those proclaiming their pro-Russian loyalties were following an age-old Jewish strategy of accommodation dictated alike by rabbinic teachings and common sense—and Petrovsky-Shtern conveniently ignores those Jewish leaders (like the hasidic rebbe Mendel of Rymanov) who sympathized with Napoleon.

All of which is too bad, since this book would have succeeded without any extravagant claims about golden ages (though admittedly, as a title, More of the Same in the Shtetl does sound somewhat less intriguing). Its flaws, however, should not detract from its accomplishments. Petrovsky-Shtern carefully describes important aspects of shtetl life previously unknown or shrouded in mystery. He neither ignores nor idealizes the role of religion in the shtetl, instead describing popular beliefs and practices as part and parcel of a complex social fabric. And he presents a fresh perspective on Russian Jews’ attitudes toward the land of Israel, bucking a recent scholarly tendency to ignore the subject altogether. Throughout, his writing is buttressed by data-rich documents that have been gathering dust in Ukrainian archives.

Following Petrovsky-Shtern’s example, I’ll end by returning to Anatevka (which, by the way, was not a shtetl but a derfl—a village). In my own courses, I soon gave up on deconstructing Fiddler on the Roof, because most of my undergraduates had never seen it and did not harbor stereotypes one way or another about the East European Jewish past. But it would be healthy in general to develop a view of that past based neither on nostalgia nor on repugnance, a task in which the rounded, human picture that emerges from this book can help. There is something to be learned from a place where Jews were self-confident, enterprising, religiously observant, and able to sustain harmonious social and economic interactions with their non-Jewish neighbors and compatriots.

Andrew N. Koss is an associate editor of Mosaic. A Ph.D. in history from Stanford, he recently completed a Mellon postdoctoral fellowship at Colgate University and is writing a book about the Jews of Vilna during World War I.