What Was He Thinking?

By seeking reconciliation with Iran, Washington alienates its allies and contributes to ever greater mayhem in the Middle East. 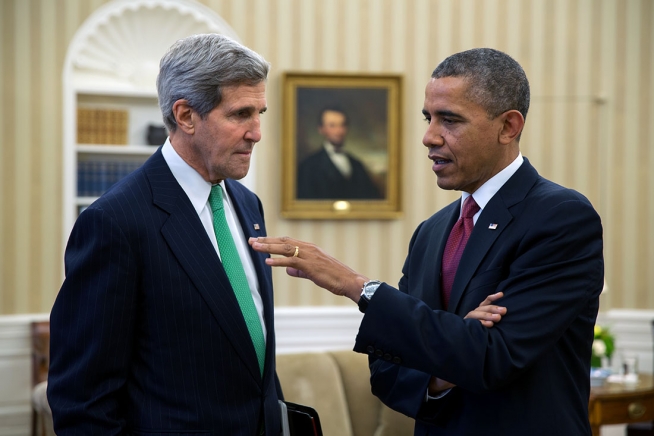 On Friday July 25, as war raged in Gaza, John Kerry delivered a draft ceasefire agreement to Israeli Prime Minister Benjamin Netanyahu, who then presented it to his security cabinet for consideration. Because the proposal granted Hamas a significant political victory—acquiescing, up front, in a number of the terrorist group’s key demands while failing even to mention Israel’s two primary concerns of infiltration tunnels and rockets—the ministers unanimously rejected it.

When unnamed officials leaked the document to Israel’s habitually left-leaning press, along with an account of the government’s thinking, a firestorm of indignation erupted—not, however, at Netanyahu but at the American Secretary of State. The views of one highly respected journalist were typical. Kerry’s proposal, he wrote, “raises serious doubts over his judgment. . . . It’s as if he isn’t the foreign minister of the world’s most powerful nation but an alien who just disembarked his spaceship in the Middle East.”

The journalist in question, Barak Ravid, is the diplomatic correspondent for Haaretz, the flagship publication of the Israeli Left. Remarkably, Ravid was not alone among his colleagues. Some of the most vituperative attacks on Kerry came from critics of Netanyahu—columnists and others who regard the prime minister’s support for Israeli settlements as the greatest impediment to peace with the Palestinians.

What accounts for this unprecedented show of unanimity? Wartime solidarity, in part—but only in part. No less dismaying to the Israeli Left was the way Kerry’s proposal shunted aside both Egypt and the Palestinian Authority (PA) in a mad rush to embrace Hamas, Turkey, and Qatar as trusted interlocutors. In the eyes of Israeli leftists, the PA and Egypt are essential to a two-state solution of the conflict with the Palestinians, and any proposal that diminishes their standing is ignorant and misguided.

“It’s not clear what Kerry was thinking,” Ravid wrote. Indeed, Kerry’s Israeli critics assumed that he was not thinking at all. One commentator accused him of a “rookie mistake.” But this evaluation assigns responsibility to the wrong man, and incorrectly identifies the nature of the miscalculation. The true architect of the fiasco was not Kerry but President Obama, and the blunder was no tactical mishap. Rather, it was the logical product of a grand strategy, and fits seamlessly into an unmistakably broad pattern.

All across the Middle East, the traditional allies of the United States, just like the Israeli Left, feel that Obama has betrayed them. Egyptians, Saudis, Jordanians, Emiratis, and Turks, despite the very real differences among them, nurture grievances similar in kind to those expressed on the pages of Haaretz. Ravid’s question—“What was Kerry thinking?”—deserves to be recast. It would get closer to the heart of the matter to ask what the president was thinking.

The answer is as simple as it is surprising: the president is dreaming of an historical accommodation with Iran. The pursuit of that accommodation is the great white whale of Obama’s Middle East strategy, and capturing it is all that matters; everything else is insignificant by comparison. The goal looms so large as to influence every other facet of American policy, even so seemingly unrelated a matter as a ceasefire between Israel and Hamas.

During the latter decades of the cold war, American presidents developed a strong sense of “our team” and “their team” when it came to the Middle East. After the fall of the Berlin Wall, that attitude persisted—even as “their team” transformed itself from the Soviet camp into Iran’s so-called Resistance Alliance, which includes such otherwise disparate partners and proxies as Syria, Hizballah, and Hamas.

Obama has abandoned that conception entirely. To be sure, he still pays lip service to countering Iran’s malign influence in the region. But in practice, nothing could be farther from his mind. Last January, he offered what is undoubtedly a more accurate account of his thinking when he mused about Iran becoming a stabilizing force in the Middle East. “[I]f we were able to get Iran to operate in a responsible fashion,” he told David Remnick, the editor of the New Yorker, “you could see an equilibrium developing between . . . [Sunni] Gulf states and [Shiite] Iran in which there’s competition, perhaps suspicion, but not an active or proxy warfare.”

Two key assumptions inform this line of reasoning. First, the president posits that Iran is now a defensive power. Holding on for dear life in the volatile Middle East, it has no sustained interest in undermining the United States, which might even serve as its ally in countering Sunni extremism. Second, Hamas and Hizballah are similarly defensive—and ready, under the right circumstances, to moderate their aggressive hostility.

In brief, President Obama now thinks of the region’s politics in terms of a roundtable. Everyone seated at it is potentially equal to everyone else, and the job of the United States is to narrow the gaps among antagonists in an effort to bring the system to the desired state of “equilibrium.” It was precisely this concept that informed American diplomacy over the Gaza ceasefire. Although the administration was quickly forced to backpedal and abandon its proposal in the face of opposition from Israel, Egypt, and Saudi Arabia, the incident illustrated starkly how its Ahab-like fixation on a grand bargain with Iran has created a culture that makes stiffing American allies just a normal part of doing business.

Is it necessary to point out that those allies see the politics of the region very differently? They envisage not a round table but, at best, a rectangular one, with their team sitting on one side and Iran and its proxies on the other. They expect the United States either to join their side or to tilt heavily in their favor.

They also see something else: the complex and multiform divisions on the ground that make the Middle East so challenging. In addition to the rift between Iran and its opponents, there also exists a rivalry between those states, preeminently Turkey and Qatar, that support the Muslim Brotherhood and those, preeminently Egypt and Saudi Arabia, that oppose it. Because Hamas is both an offshoot of the Muslim Brotherhood and a proxy of Iran, these two rivalries have intersected in the Gaza war—which is why, in the eyes of Egyptian and Saudi leaders, Hamas represents a double threat. Even though the spectacle of a Jewish military victory over a Palestinian adversary is profoundly unpopular on their own streets, they are eager to see Israel crush that threat.

When John Kerry developed his ceasefire proposal, he largely ignored all this, and particularly the preferences of Riyadh and Cairo. Not only was he enhancing Hamas’s power and prestige but, through his courtship of Turkey and Qatar, he was also offering it a path out from under the thumb of the Egyptians. Still worse, Kerry’s proposal was a windfall for the Iranians, who have played an indispensable role in building Hamas’s military machine and who, even as Kerry was working to settle the conflict, egged Hamas on against Israel. Whether Kerry consciously intended to benefit Iran is immaterial. The roundtable approach to Middle East problems, the fruitless search for equilibrium, automatically works to Iran’s advantage.

No wonder, then, that Obama’s policies are in a shambles. It is impossible to succeed in the Middle East without partners, and so long as he remains bent on empowering Iran and its proxies (who, for their part, continue to make no secret of their loathing for the United States), America’s traditional allies will withhold their own support for Washington’s initiatives. This fact raises a question: when it finally becomes obvious not only that the president’s policy will never work but that it has, in fact, contributed to producing ever greater mayhem and carnage in the region, will he reverse field?

The answer is no. Early on his presidency, perhaps even before he was inaugurated, Obama resolved that he would be remembered in history for pulling the United States back from the Middle East—for ending wars, not starting them. The roundtable approach is his scenario for what should replace the American-led order of yesteryear. To admit that an equilibrium with Iran is a chimera—and that instead of ending wars he has helped prolong and multiply them—would be tantamount to renouncing his cherished legacy.

The president has already displayed an extremely high tolerance for turmoil in the Middle East, and he will display an even higher one before entertaining the notion that his strategy is profoundly misconceived. “Apparently,” Obama said in a recent press conference, “people have forgotten that America, as the most powerful country on earth, still does not control everything around the world, and so our diplomatic efforts often take time. They often will see progress and then a step backward. That’s been true in the Middle East.”

Our current step backward will undoubtedly last for at least two more years—at untold cost to the region, to us, and to “our team.” As Libya crumbles, Syria and Gaza burn, and the “caliphate” leaves a trail of headless corpses from Baghdad to Damascus, more rivers of blood will flow. America’s allies are on their own.

Michael Doran, a senior fellow of the Center for Middle East Policy at the Brookings Institution, is a former deputy assistant secretary of defense and a former senior director of the National Security Council in the George W. Bush administration. He is finishing a book on Eisenhower and the Middle East. He tweets @doranimated.

What Was He Thinking?