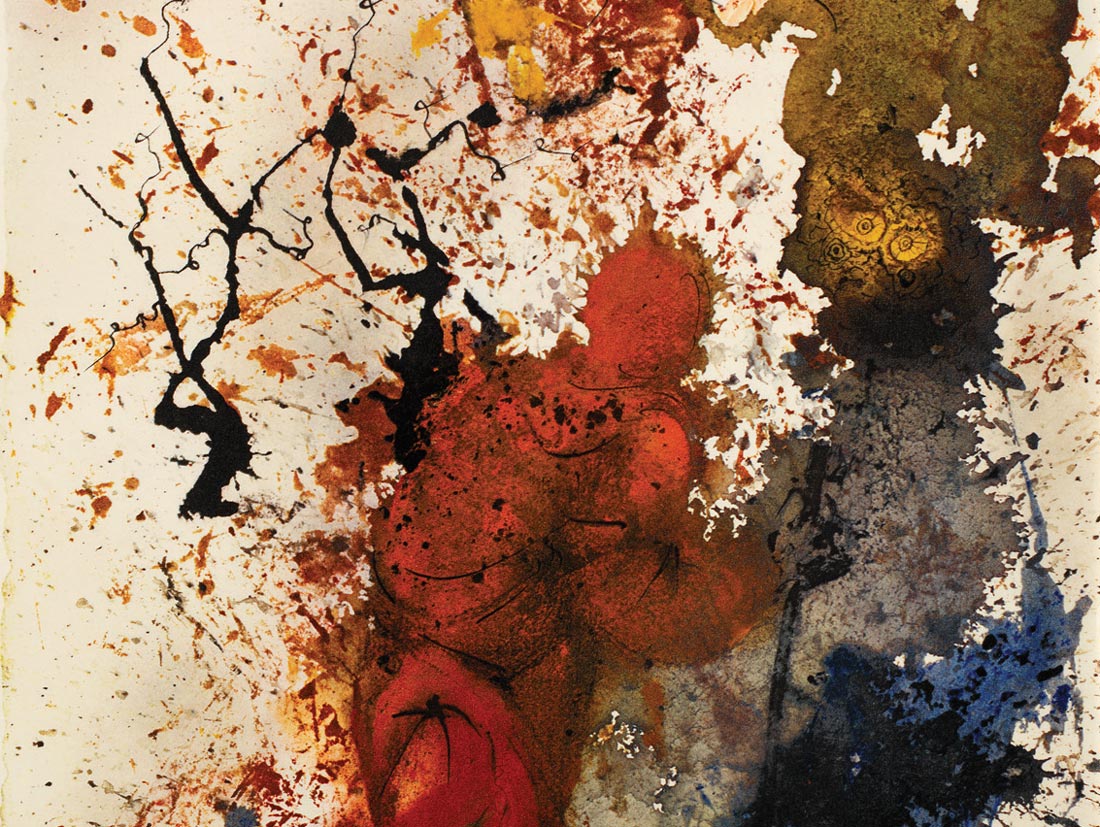 One of the things I miss about Jerusalem is the sense of living in a land where even the paganism is Jewish. What do I mean by paganism? I mean an entirely un-mediated relationship with the cosmos, one that does not require the intercession of a Temple sacrifice, let alone negotiating a maze of halakhic guidelines. Visit Jerusalem on a Friday afternoon and you can feel the sheer energy of the entire city buzzing as people rush about their preparations for Sabbath. I’m not talking about haredim, or Modern Orthodox, or secular—I’m talking about Jews, period, everybody running around as the sun starts to tip. The same goes for those who indulge in what seem to me the rather dubious outskirts of a monotheistic faith – going to lie on the graves of “righteous ones” or holding celebrations of the talmudic rabbi Shimon bar Yohai at Mount Meron: this, too, is for me the pagan underbelly of the country, and this, too, is Jewish in Israel.

Where I live now, in Hebden Bridge, West Yorkshire, the pre-Christian and pagan element is again palpable, in this case in the way people still speak and relate to each other. Ted Hughes, the late British poet laureate who was born and raised in the adjacent village, credited the local dialect for his personal connection to Anglo-Saxon English, a bawling and blood-stained language, if ever there was one, through which to address and view the universe.

To me, that bawling view of the universe is much closer than is contemporary Judaism to one of the main liturgical centerpieces of the Rosh Hashanah and Yom Kippur liturgy. I am speaking of the Unetaneh Tokef prayer, recited in Ashkenazi synagogues during the morning’s supplemental (musaf) service. To illustrate my point, I’d like to present two translations of the piece: first my own, in which I’m attempting to convey what I consider the horror of the piece, and second a version by the singer and songwriter Leonard Cohen. If readers suspect me of playing a parlor trick, I ask their indulgence and mention only that I was first introduced to Leonard Cohen’s version during the alternative Rosh Hashanah service at my United Synagogue shul in London, led by the present head of the London School of Jewish Studies.

Let us tell how sacred the day is
for it is terrible and terrifying
and on it Your majesty will arise
and Your throne be graciously prepared
and You will sit on it in truth.
True
for You are the judge
and advocate and expert and witness,
and sign and seal
and count and number
and recollect all that’s been forgotten
and open up the book of memories
and from it shall be read aloud.
And every man’s hand is set within.
And a great horn will be blown
and the sound of brittle silence be known
and angels will careen
and trembling and terror will seize them
and they’ll say, Here is the day of judgment,
calling the heavenly host to judgment.
And all that came into the world will go before You
like heads of sheep.
As a shepherd checks his flock,
passing his sheep under his staff,
so shall You
pass and count and number and call
the soul of all that lives
and cut out the portion for all You made
and write out their sentence.
On New Year’s day they shall be writ
and on the Fast of Atonement be sealed.

And penitence and prayer and charity
blunt the brunt of the blow.

I don’t know about you, but at some point around “quake,” and certainly by the time I get to “stifle,” I start feeling queasy. I mean, it’s not a dignified or pretty picture of the universe, is it? The Almighty is at best an expert veterinarian but actually much more a simple shepherd, picking up and inspecting each and every animal—and don’t give yourself airs about having received the Torah, you’re just another critter being held up in the air to have its hooves examined—and then deciding what it is that’s going to do you in. No sin offerings, no bribes to be roasted by high priests, and no amount of synagogue dues can interfere with this natural process.

Recent scholarship dates the poem to the 8th century, based on fragments found in the Cairo Geniza and on the three-part prescription of penitence-prayer-charity at the end. The same formula occurs in the midrashic compilation Genesis Rabbah, composed in the Land of Israel, and it differs from a later, four-part formula found in the Babylonian Talmud. Indeed, the three-part prescription requires no Temple; you have to repent, you have to pray, and you have to give something away, and you can do all that without leaving your home in remote Judea or for that matter in Oshkosh.

And this is what I mean by pagan: not the worship of the sun and moon but this primal sense of the Almighty hovering over and  inside every living thing. As another prayer puts it, He “examines the kidneys” of each thing—an image that does lean more to the veterinarian than the shepherd but offers precious little additional comfort.

Leonard Cohen’s version is more urban than mine:

And who by fire, who by water,
Who in the sunshine, who in the night time,
Who by high ordeal, who by common trial,
Who in your merry merry month of may,
Who by very slow decay,
And who shall I say is calling?

And who in her lonely slip, who by barbiturate,
Who in these realms of love, who by something blunt,
And who by avalanche, who by powder,
Who for his greed, who for his hunger,
And who shall I say is calling?

I’ve omitted Cohen’s final verse because the rhyme scheme deteriorates somewhat, but you get the gist. I like this version a lot, I think it brings in a nice touch of English Silver Age poetry with the allusion to Thomas Dekker’s “merry month of May,” and, at least when Cohen sings it, I find that words like “barbiturate” and “something blunt” and oppositions like “greed” and “hunger” have a biblical force to them. And it does also capture a sense of him as a boy in a synagogue in Montreal, listening to that prayer being recited.

What I miss in Leonard Cohen’s cosmos is not actually the dark side but the sense of the scales’ capacity to turn. His universe, at least in these verses, is an agnostic one, a world in which we are abandoned to our vices. There is no recipe for forgiveness—and why should there be if there is no one to forgive? I’m not questioning his credentials as a Jew or indeed a Buddhist monk, but this version of the prayer strikes me as a perfect crystallization of the post-religious era’s relationship to the universe. There is nobody out there calling; what will do you in is yourself, not anybody nearly as well informed as a shepherd.

I don’t mean to harp on the West Yorkshire dialect, but I’ve been having meetings in London over the last few months to discuss song lyrics and literary translation, and it was made clear to me that having your ear tuned to a language different from the highly urban version spoken in London—or New York, or L.A.—puts you if not beyond the pale then at least in a separate category. My neighbors here still say things like, “Red sky at night, shepherd’s delight; red sky at morning, shepherd’s warning.” Such a phrase loses its meaning in London where the sky is red from smog.

More than that, in London people’s relationship to themselves and the language is no longer pagan. Life may be nasty, brutish, and short in any number of ways, but it isn’t pagan. That particular connection to the universe, I would guess, comes only out of a certain relationship with the land. Urban societies, like the one the exiled Jews from the Land of Israel joined in Babylonia, no longer have that relationship, so perhaps this prayer reflects an earlier grasp of the spirit hovering over the abyss, ready to create the universe. And ready to judge every single living thing in it.

For where Your name is known
There is Your praise sung,
Slow to anger and easy to calm,
For You do not desire the dead man’s death
But that he repent from his path and live
And till the day he dies You wait for him,
If he repents right there You’ll take him home.
True
For You made them and know their drive
For they’re flesh and blood.
Man is founded from dirt
And his end is dirt
At the cost of his life he brings his bread,
Like a clay pot that breaks
Like chaff, a withered bud,
Like a shadow that passes, a cloud that melts,
Like a breeze that billows and a dream that glides.
But You are the King, the God, the One who lives and endures
There is no limit to Your years
And no end to the length of Your days
And no reckoning the chariots of Your glory
And no plumbing the secrets of Your name.
Your name befits You and You befit Your name
And You have called us by Your name.
Act for Your name’s sake and sanctify Your name
For the glory of Your name.

If people are to be found in synagogues on Rosh Hashanah and Yom Kippur—and, around the world, those days draw many more people than the good-time holidays like Simhat Torah, Purim, or Shavuot—I think it is because of that quality of the Almighty that Cohen’s version does not venture to quantify. But He endures. And we hope that we, too, may endure. It is in order to approach the great awe and fear and to hope that it will pass, to hope that the blow can be blunted, to appease the abyss by facing it directly and appealing to the spirit hovering over the darkness, that even the most secularly inclined may make their way to synagogue at that time of the year.

You go to synagogue to find what endures. On Rosh Hashanah you say that prayer and you feel the fear—and you glimpse, at the end, the possibility of transcending it. On Yom Kippur, the confession you make is the one you recite before the hour of your death, the confession you make to the Shepherd before He finds the poison in your kidneys. And with that confession you hope He will forgive. You hope for and address somebody empowered to forgive and hand over your fragile bones into the darkness, where you hope they may endure.

Atar Hadari, born in Israel and raised in England, is a poet and translator whose Rembrandt’s Bible, a collection of biblical monologues, was recently published in the UK by Indigo Dreams. His previous essays in Mosaic are “The Preacher’s Air” (on Ecclesiastes), “Esther in Des Moines” (on the book of Esther), “The Love of Their Youth” (on the Song of Songs), “Thomas Hardy in Judea” (on the book of Ruth), and “Jerusalem Is Not Destroyed” (on Lamentations), all accompanied by original translations.